Here’s What Happens Between Black Panther and Avengers Infinity War

The Marvel Cinematic Universe is officially a decade old now, with 17 movies to date. But did you know that Marvel has been publishing tie-in comics since the beginning? These comics reveal new details and extra nuggets of information that expand upon the established continuity of the MCU and even fill in some of the gaps left by the movies. The latest tie-in comic Marvelâ€™s Avenger: Infinity War Prelude shows us the whereabouts and what these superheroes have been up to between the events of Captain America: Civil War (2016) and the upcoming Avengers: Infinity War (2018). 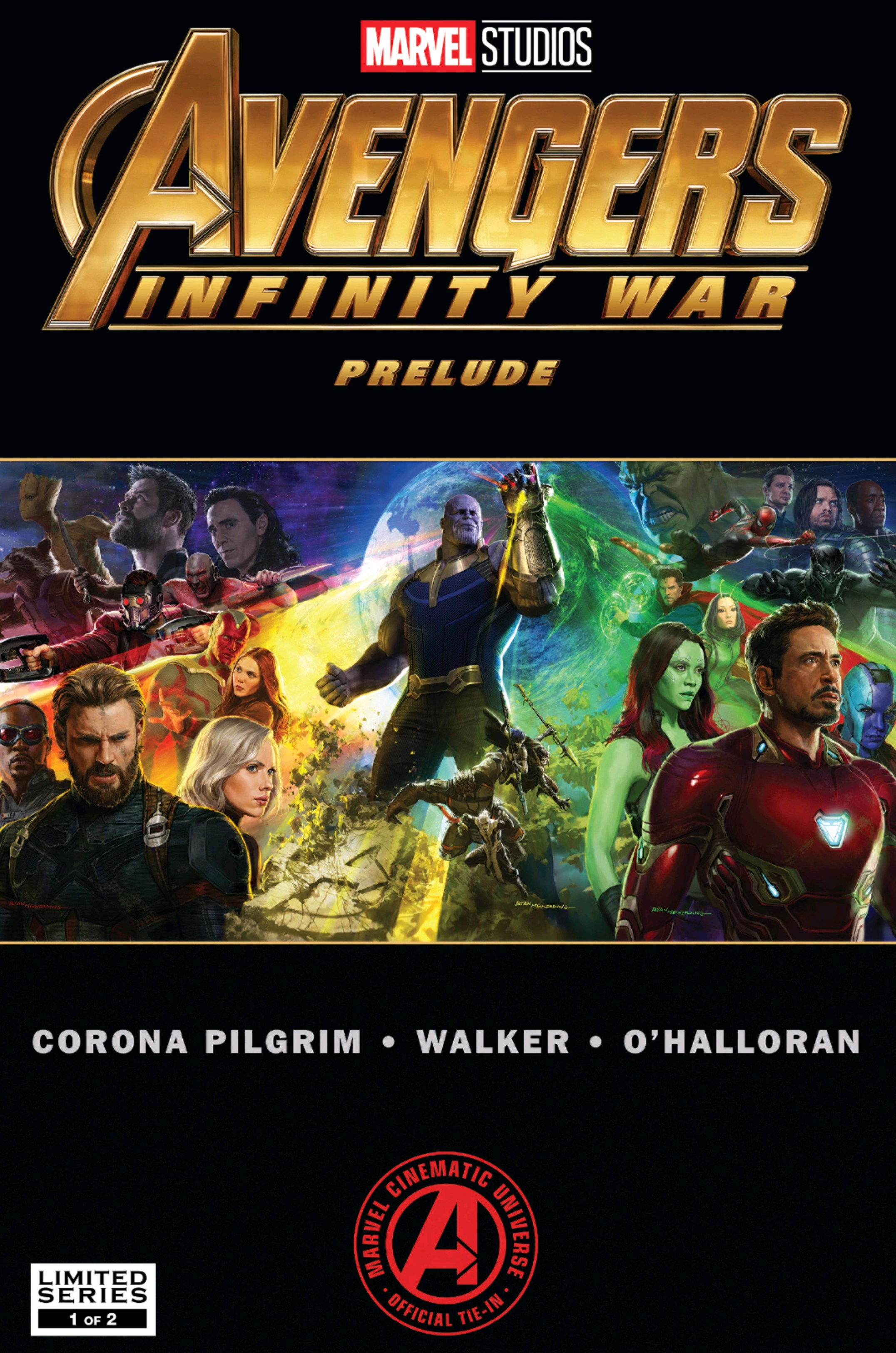 In Captain America: Civil War, we last saw our heroes divided. Steve Rogers leaves his shield behind with Tony Stark and goes on the run, saving the comrades who stood by him by breaking them out of the Raft prison. Tony Stark helps rehabilitate James Rhodes (Iron Patriot) with an exoskeletal leg brace to assist him in walking again while receiving a letter and phone from Steve saying that he will only be one call away if they need him. The movie ends with Bucky Barnes (Winter Soldier) agreeing to enter cryogenic sleep until a cure for his Hydra brainwashing triggers is found.

In the first issue of Marvelâ€™s Avengers: Infinity War Prelude, instead of fading out like the film did, the comic shows us Steve Rogers literally dropping from a Quinjet midflight into the ocean and freaking swimming to the Raft prison, infiltrating it and giving the guards there a good beat-down with a WHAM and THWACK! 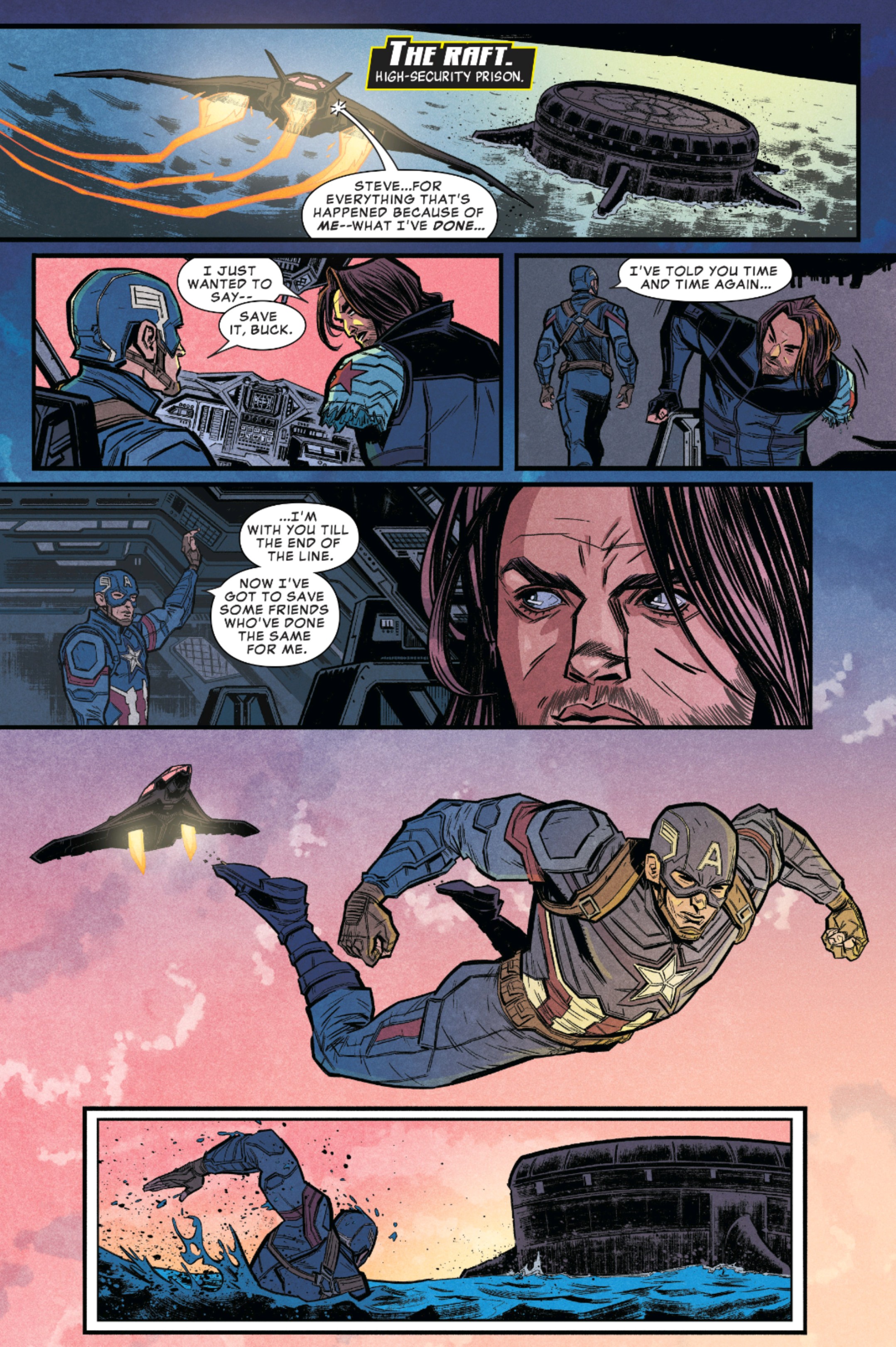 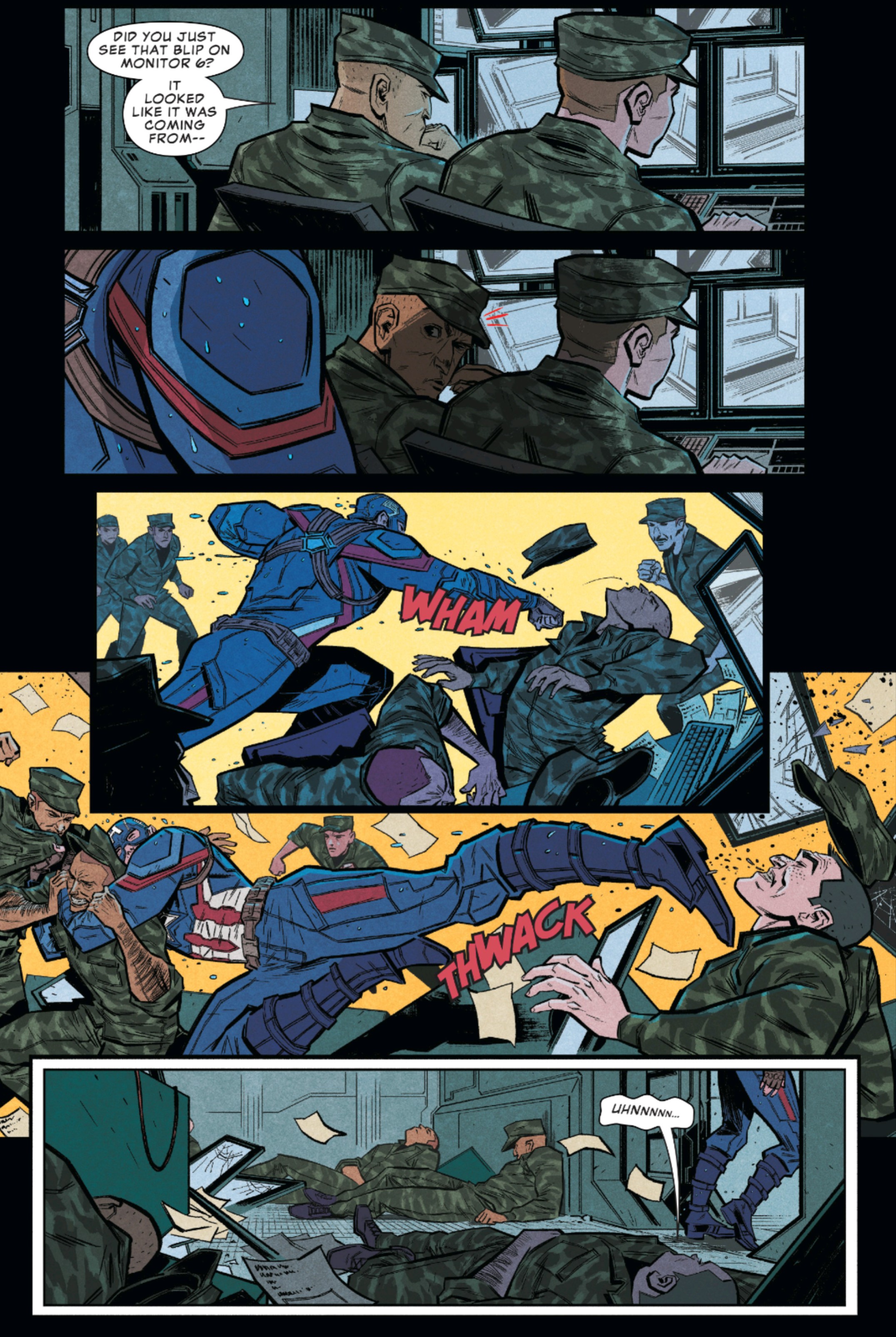 After being rescued, we see Clint Barton (Hawkeye) and Scott Lang (Ant-Man) finally reuniting with their families while Wanda Maximoff (Scarlet Witch) chose to meet up with The Vision. 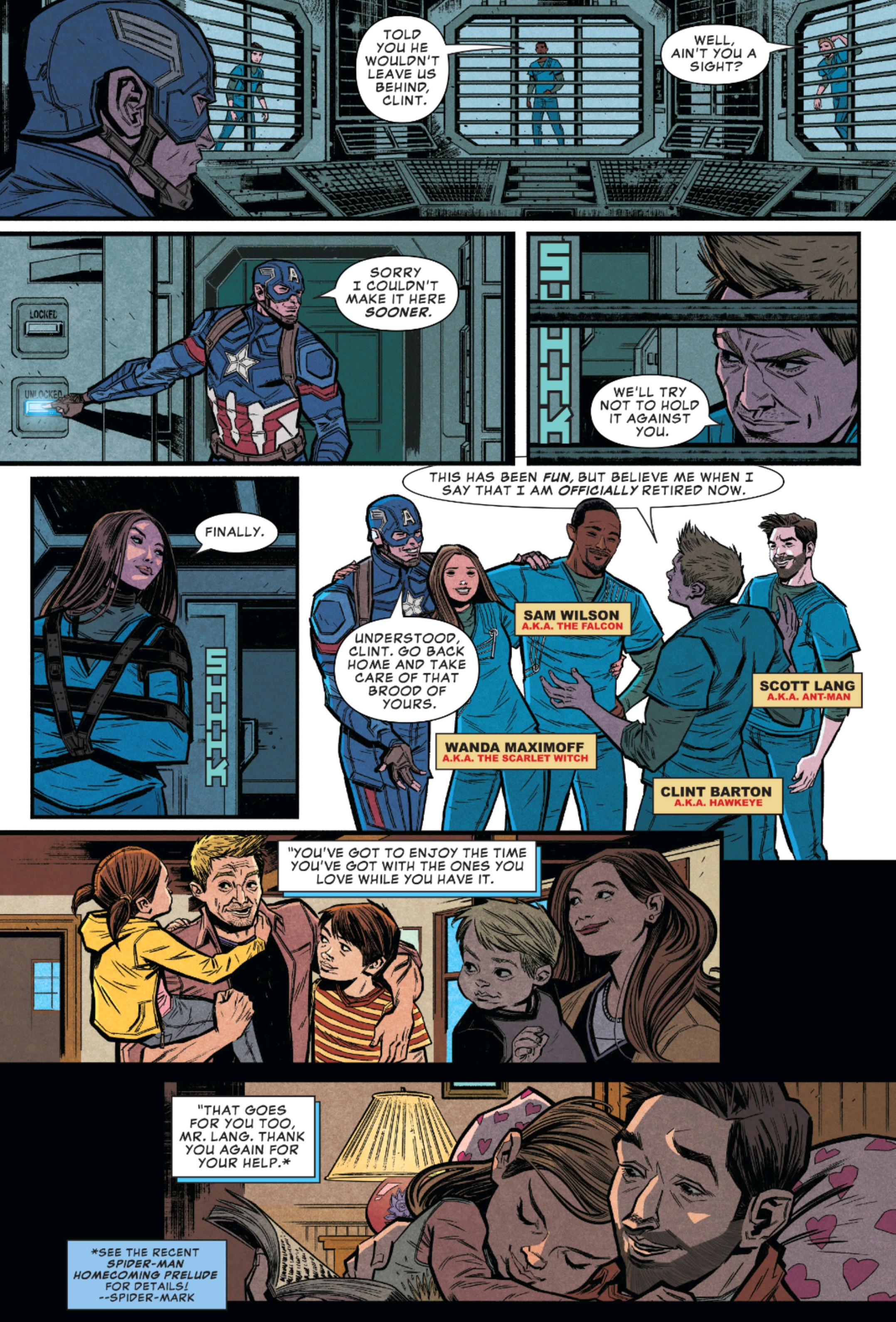 Weeks later, Steve and Bucky go to Wakanda to discuss Tâ€™challaâ€™s offer to help them. Over the next few pages and a few months in-continuity, we learn that Tâ€™challaâ€™s sister Shuri is the one leading the research that will help remove Buckyâ€™s Hydra brainwashing and that Shuri is arguably the smartest person in the world, smarter even than Tony Stark, which is confirmed by the executive producers of the Black Panther film. Sheâ€™s developing an algorithm that will delete the Hydra trigger words from Buckyâ€™s mind without damaging his personality or erasing any of his vital memories or trauma that makes him who he is. She even takes a hit at Tony. Take that, Tony Stark! She also mentions that this algorithm might improve Wakandan artificial intelligence tech even further, which might not be the best idea, considering what happened with Ultron, even though she says that Tony took a â€˜shortcutâ€™. 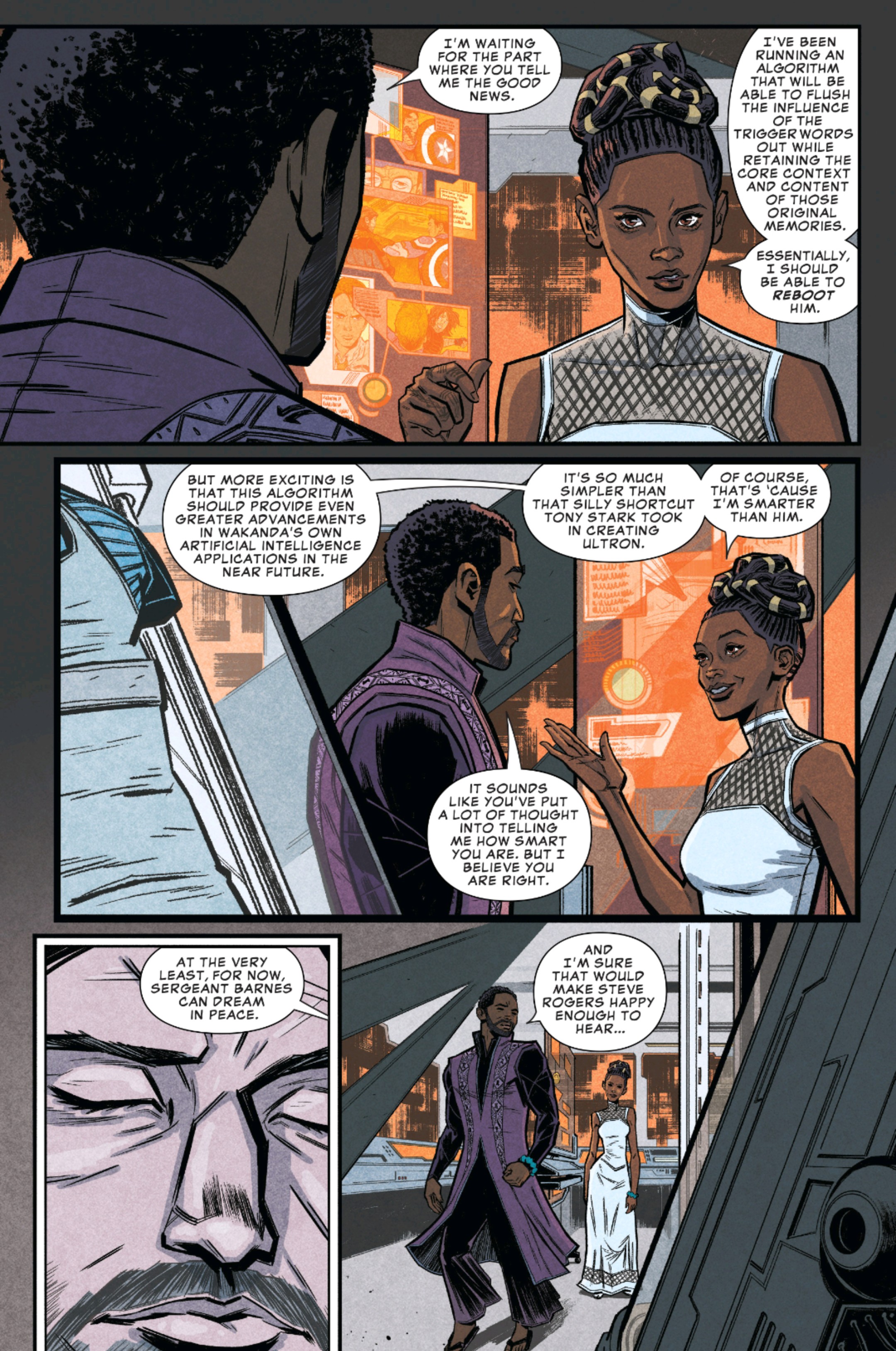 As a comic book fan, Iâ€™m a bit miffed because Iâ€™d immediately think to myself, â€œReed Richards is the smartest person in the Marvel Universe!â€ Then, I instantly (and sadly) realize that the Fantastic Four arenâ€™t in the MCU. Yet. Though that could all possibly change after the Disney-Fox deal finalizes, I also know that the process would be long and arduous, if it even results in the Fantastic Four and X-Men properties incorporated into the MCU at all in the end. Fingers crossed.

Now that we know where Bucky and Black Panther is and what theyâ€™re doing, where the heck is the rest of the outlaw Avengers?

Steve Rogers, Natasha Romanoff (Black Widow) and Sam Wilson (Falcon) are in Syria, thwarting some terrorists who are planning to use leftover Chitauri technology (this stuff is still out there? What have the authorities and Avengers been doing all this time?). Natasha asks whether they should be calling Tony and Steve tells her Tonyâ€™s got enough to think about. Then, theyâ€™re off to Lebanon next to their mission. 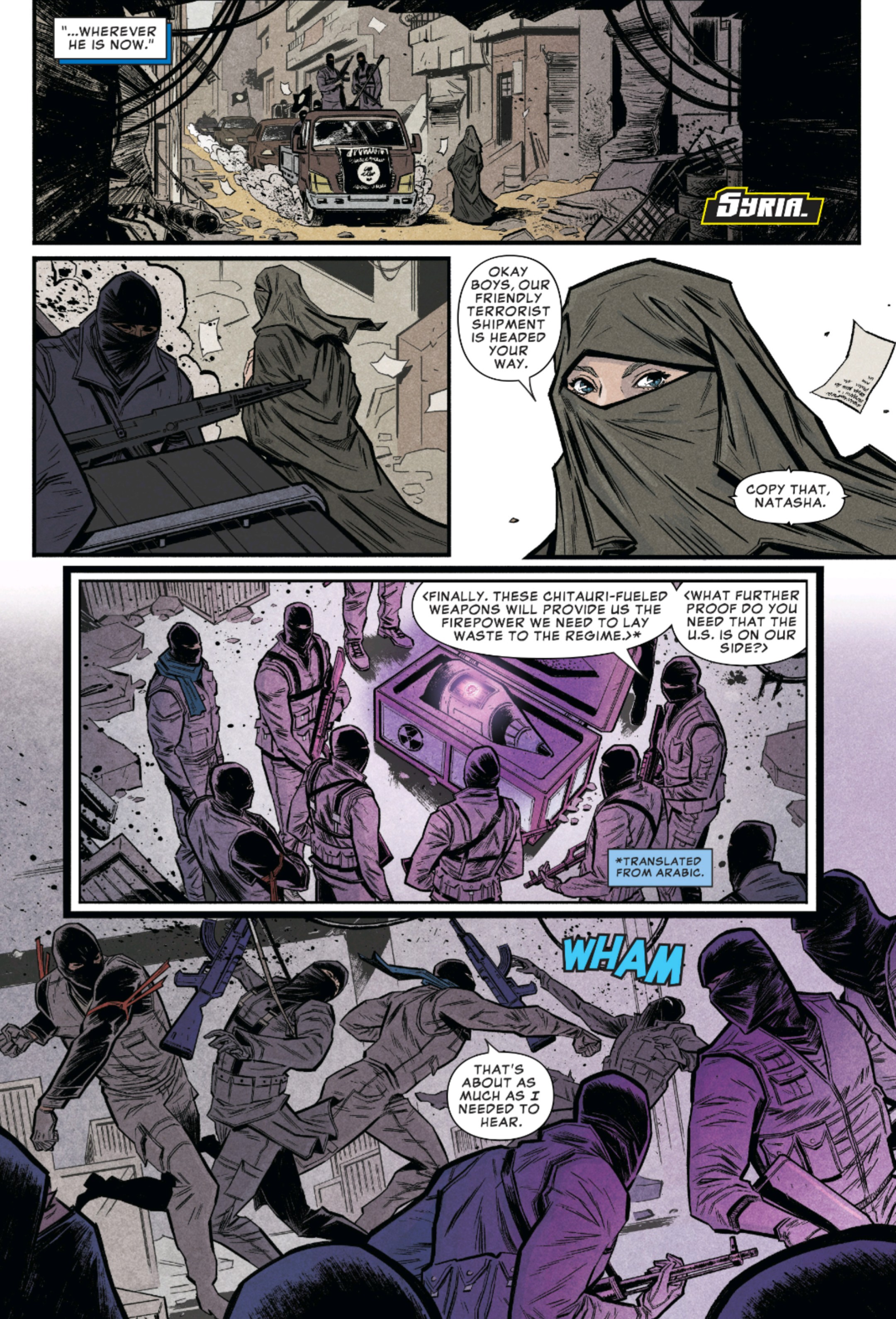 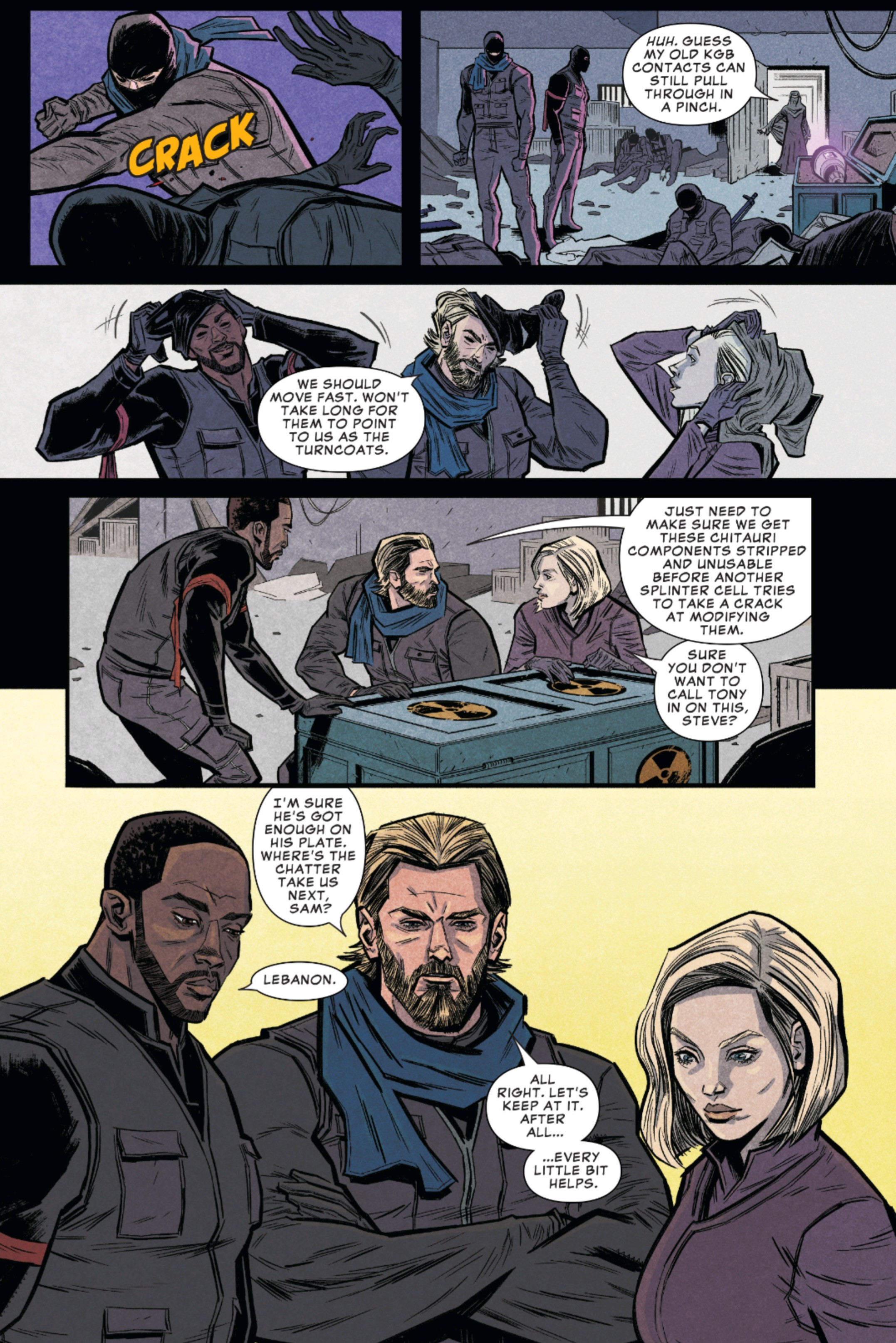 Finally, we reach the Armored Avenger himself, Tony Stark (Iron Man), all alone in the Avengers Compound. He feels guilty due to the events in Captain America: Civil War and reminisces about a conversation he had with Steve Rogers back during the events of Avengers: Age of Ultron. He contemplates whether to call Steve for help against â€˜real threatâ€™ thatâ€™s coming.Â  He decides not to do so and resolves to prepare for the â€œend of all thingsâ€ all by himself by building a new Iron Man suit (of which we see a full holographic model of). We also see the new ‘Iron Spider’ that Tony built for Spider-Man in the background, which was first seen in Spider-Man: Homecoming (2017). 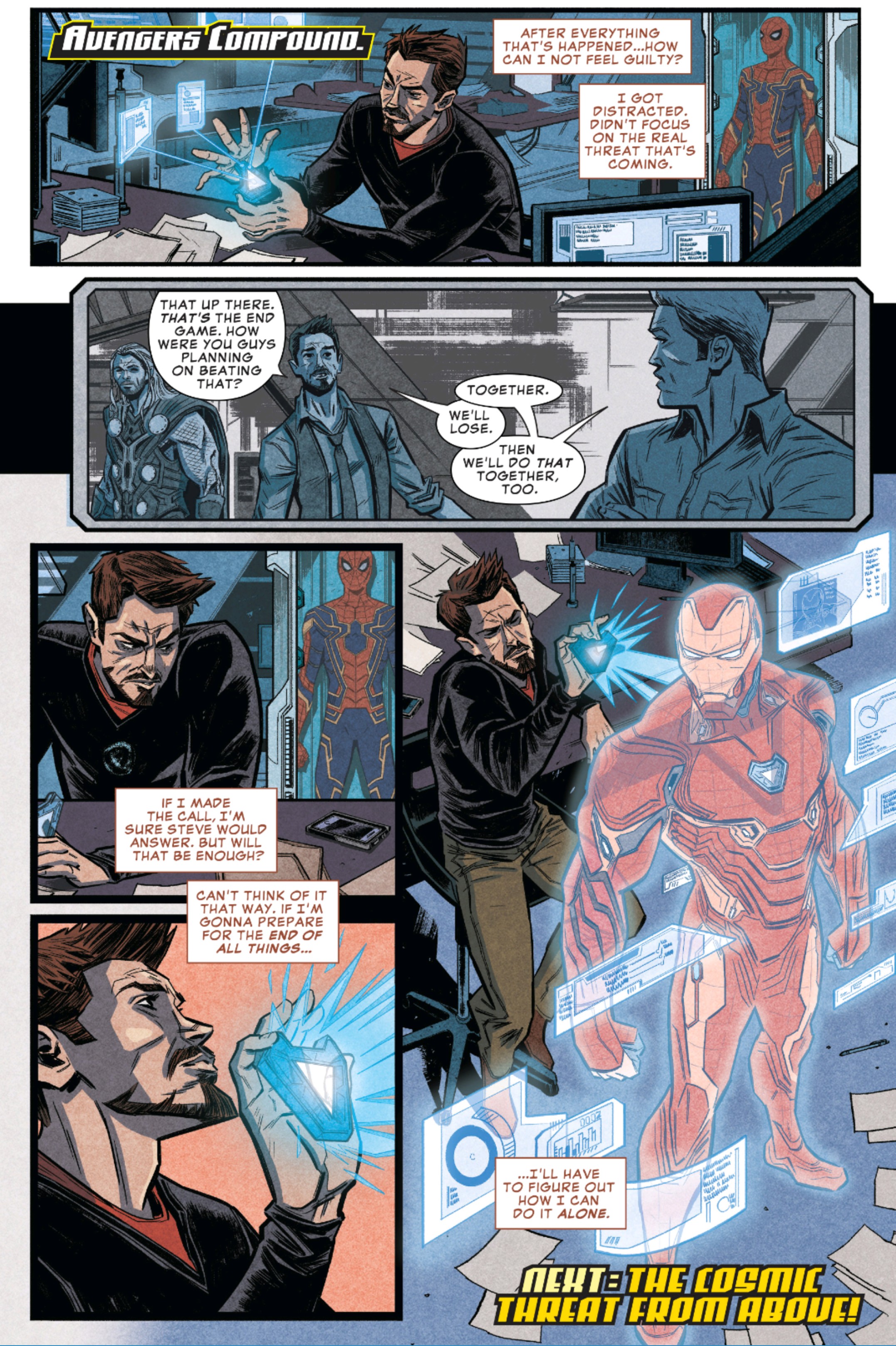 Letâ€™s discuss a bit about that armor, shall we? Itâ€™s purportedly based on the most recent Iron Man armor in the comics, Model 51 or the Model Prime Armor. It was introduced by Brian Michael Bendis and David Marquez back in 2015, specifically designed based on the sleek designs of the Lamborghini Aventador as well as the F-22 and the YF-23 fighter jets. I speculate that the movie version will be called Mark XLVIII or Mark 48 since that would be considered the natural progression from the Mark 42 in Iron Man 3 (2012) until Mark 47 in Spider-Man: Homecoming (2017). 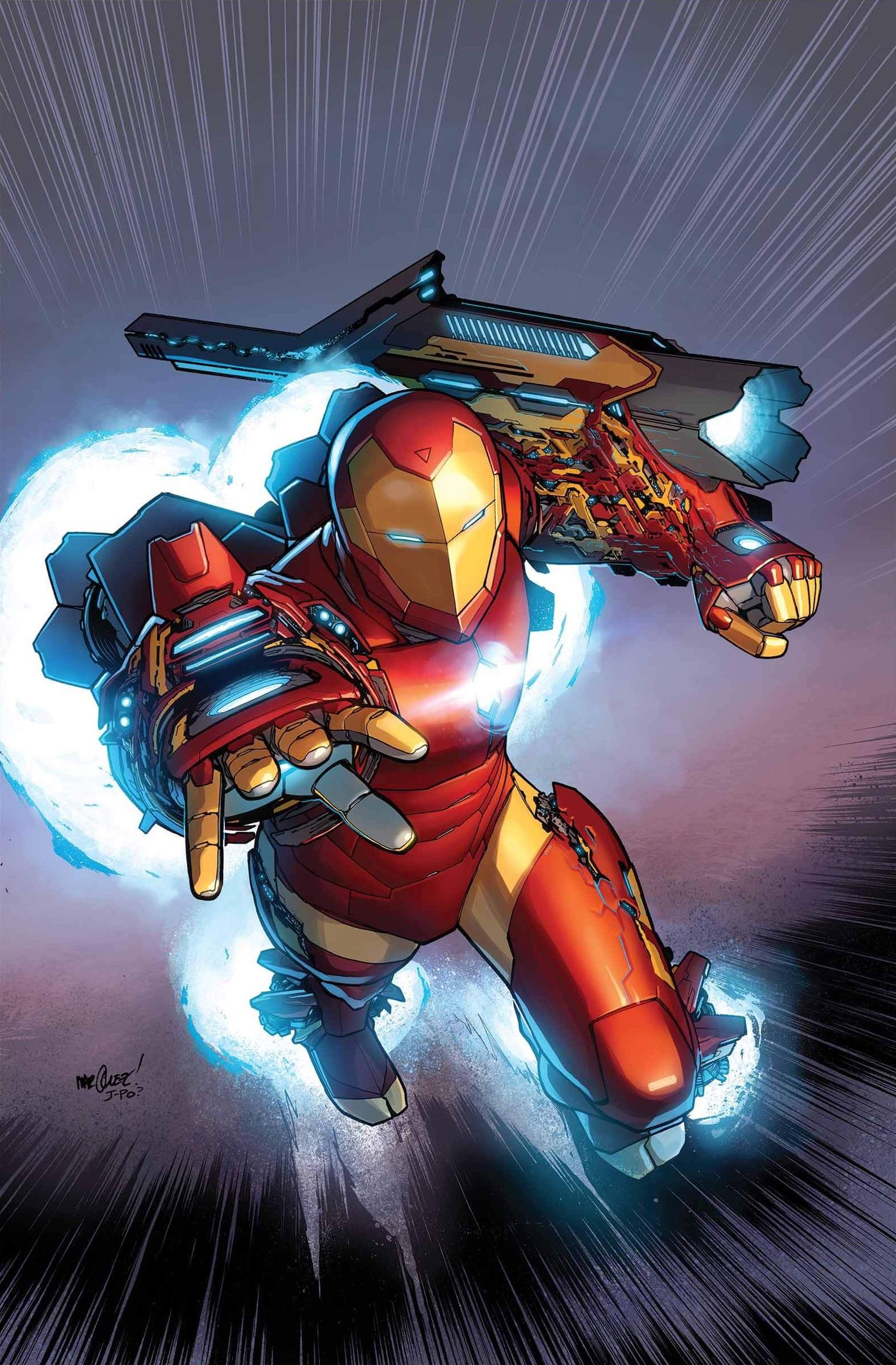 Thatâ€™s all for now, fellow comic book fans but we still donâ€™t know the whereabouts of the other superheroes including Doctor Strange, Spider-Man and the Guardians of the Galaxy. The second issue of Marvelâ€™s Avengers: Infinity War Prelude will be released next month in February and weâ€™ll probably receive even more delicious details and startling revelations to tide us over until the actual movie comes out on 26th April 2017 in Malaysian cinemas.

Bucky Barnes (Winter Soldier) is still in Wakanda and Shuri (Black Pantherâ€™s sister) is developing an algorithm that will help cure him of his Hydra brainwashing.

Clint Barton (Hawkeye) and Scott Lang (Ant-Man) are with their families.

Fun fact: According to the Official Handbook of the Marvel Universe A-Z #5, the MCU Earth is designated as Earth-199999, in comparison to the mainline comics where itâ€™s Earth-616 (or Prime Marvel Universe as of 2015â€™s Secret Wars crossover).

The nineteenth movie in the Marvel Cinematic Universe, Avengers: Infinity War drops 26th April 2018. Black Panther is in cinemas right now and you can read what we thought of it here.Â

I recently came across the following tweet making its rounds in the Malaysian Twitter-sphere. Essentially, the caption read "If you think that ...

Marvel Studios has revealed a new TV spot for Black Panther Wakanda Forever. While it's less than one minute long (only 45 seconds in length), it does...

Feature,News
Moon Knight Directors Talk About The Costume, Working With The Voice Of Khonshu & More