This is it. The culmination of 10 years in the Marvel Cinematic Universe, it has all been leading to this.

Does it manage to juggle the insane amount of heroes and villains? Is Thanos a decent villain? Is Avengers: Infinity War worthy of calling itself the most ambitious crossover event in the history of movies?

I’m here to tell you that the answer is a resounding YES to all those questions.

Avengers: Infinity War is definitely the darkest MCU movie so far. It explores mature subjects like genocide and depicts death with a side of torture on a scale never before witnessed in the MCU. The studio isn’t holding anything back this time around and we can see that in the movie, with several scenes that might even frighten children and squeamish folk.

I’m not saying that it’s grimdark and unnecessarily edgy like in the DC movies since there’s still a lotÂ of the trademark Marvel comedy we’ve come to love and loathe at the same time. Most of the jokes land this time around, and some of the lines are destined to be classics. It’s not too funny as to diminish any of the emotion during dramatic scenes, although some jokes might still be a tad too cringe-y for some.

It feels like George R.R. Martin wrote Avengers: Infinity War with all the deaths.

People complained in the past that MCU movies were afraid to take risks and kill anyone off, excluding dispensable villains and plot device characters. However, this movie takes a bold unprecedented move by having many of the characters die unexpectedly. Of course, I’m not going to reveal who dies but I am going to say that several major characters might have bitten the dust. 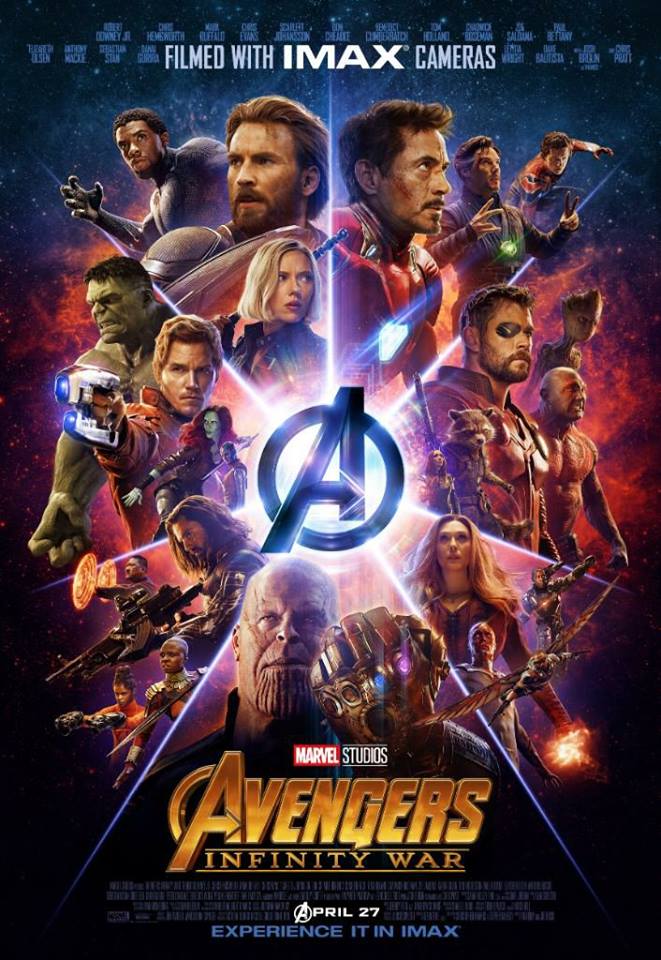 An Assembly For The Ages

Avengers: Infinity War is the first movie to feature almost all the Avengers and Guardians of the Galaxy members. Kudos to the Russo brothers for impressively managing to juggle all the characters and giving each of them a moment to shine in a movie only 2 hours and a half long.

I like how each hero has their own role to play in the movie’s plot, with some of them even having unexpectedly integral parts. The movie’s focus alternates between different groups of characters in several locations at once but it never becomes a confusing mess.

The scenes flow from one to another at a brisk and smooth pace, aided by the masterful writing. It’s similar to how tie-in comics work, developing each group in its own way while servicing and developing the overall plot of the crossover. When it all comes together in the end, it feels just like in the comics when the heroes finally ‘crossover’ for the final act of the storyline.

If you’re curious as to who received the most screentime in Avengers: Infinity War, the answer is Thanos. Yes, you read that right. It’s not even the heroes who get the spotlight. It’s essentially Thanos: The Movie. I was pleasantly surprised to see a villain getting more attention and development than the heroes for once. We see a lot of the Mad Titan and he’s the most-developed antagonist in the MCU to date.

Move aside, Loki and Killmonger, there’s a new contender for the title of best villain. Josh Brolin is excellent as Thanos, portraying a more complex and nuanced type of villain.

Although MCU Thanos’ motivations aren’t quite comics accurate, I feel that it’s a nice twist on the reason for his obsession with collecting the Infinity Stones to use the Infinity Gauntlet. He’s not just evil for evil’s sake and the amount of development devoted to Thanos provides a nice refreshing change in perspective for a superhero movie. I’m calling it now, give the man an Oscar!

As for the heroes, I’d say the Avengers: Infinity War puts emphasis on some heroes more than others. Thor, Iron Man and Doctor Strange are probably the Avengers with the most screentime, followed by the Guardians of the Galaxy who were quite prominent throughout the movie too, especially Gamora (since she’s directly connected to Thanos).

That’s not to say that the others were ignored, all of them received decent screentime and like I mentioned above, everyone has their moment to shine. Frankly, I would have loved to have seen more of Captain America. It’s true that we spent roughly only half the of the movie on Earth, with the other half in space (which fits the cosmic theme of the movie).

There’s plenty of action in Avenger’s Infinity War. You’ve got the Thanos’ Black Order with their myriad powers up against the Avengers. The sheer variety of action set pieces in this movie far surpass all the other MCU movies.

There’s Iron Man with his new modular armor that allows him to perform great feats and even go toe-to-toe with Thanos himself. We see more of Doctor Strange’s magical spells and even an iconic one that was taken straight from the comics.

That’s not even mentioning all the other Avengers and Guardians, especially during the massive battle that takes place in Wakanda (which I’m not spoiling because it was in the trailers). That was truly the highlight of the entire movie, you need to see it in action. It was gloriously shot setpiece on a scale akin to something from Lord of the Rings or Star Wars.

A Movie Unlike Any Other?

As a comics reader, I admire Avengers: Infinity War not only for being a good adaptation of Jim Starlin’s iconic Infinity Gauntlet crossover back in the 90s but for being able to successfully pull off a huge bonafide comic book movie crossover.

Keep in mind the Avengers: Infinity War was originally supposed to be Part 1 of the full story arc. Marvel Studios decided to remove the Part 1 from its name but it’s still meant to directly lead to the events of Avengers 4. They haven’t announced the official title yet but it will be releasing next year so you won’t have long to wait. Trust me, after watching Avengers: Infinity War, the MCU will be changed forever.

Don’t forget to wait until the very end for a post-credits scene. Avengers: Infinity War is 10 years worth of planning and hard work. It shows. This movie reveals the limitless potential of a comic book movie. I am proud of how far comic book movies have come and I look forward to seeing what the future has in store.

Reviews
Ys IX Doubles Down A Lot From The Last Game, But It's Still A Jolly Good Time

Platform: PS4 Genre: Action RPG with some tower defense bits Ys IX (pronounced "is-su") is about a red-headed adventurer who gets out of a giant-a...

Marvel Studios has release the first trailer for the upcoming Thor Love And Thunder, which is slated to premiere in cinemas on 8 July 2022. That's onl...

Leave a Reply to Summer Films To Watch Out For, From May Until August – KAKUCHOPUREI.COM Cancel reply