After 15 or so hours in Assassin’s Creed Odyssey, we can safely say that this game is definitely a little more than just an expanded version of Assassin’s Creed Origins, last year’s Ubisoft sandbox game featuring assassins, Egypt, and a pretty cool protagonist.

While they’re not major changes, the differences are more than subtle to at least warrant some attention from even the most jaded of AC fans and followers. And don’t worry about spoilers: we’re only going to talk about the first two hours of both games plot-wise.

First, let’s point out their similarities:

-AC Origins and AC Odyssey have open worlds where players wander around in historical time periods and setpieces to partake in main missions and sidequests that usually involve killing things and stealing something.

-Both these games are built while ignoring the many trappings of the past 10 Assassin’s Creed games, like hiding in crowds, the whole “sit on the bench to hide” trope, and no mini-map to guide players. Thank god for that.

-There’s little to almost no references to the whole Assassins vs Templars storyline because both games take place before that conflict took place.

-Because of their RPG nature, there’s a lot more numbers and math involved when you hit enemies and assassinate them quietly. Both games also have skill trees that improve your character and his/her fighting style. 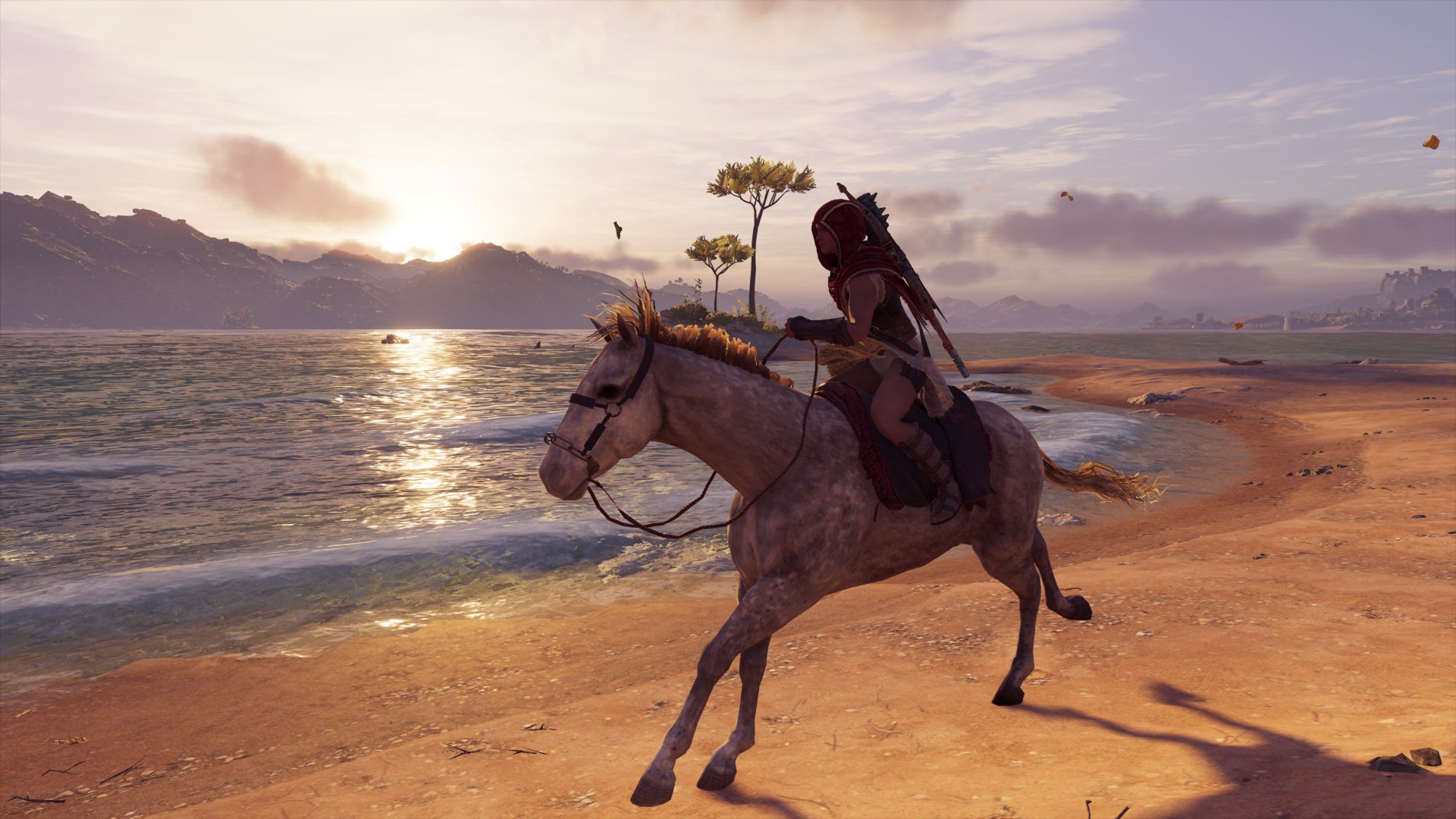 -The loot you get is also colour-coded based on rarity. Ubisoft has been taking lessons from Destiny and World of Warcraft.

–Both simulations of the past (Assassin’s Creed game, remember?) are experienced by researcher Layla Hassan who wants to dig deep into the past for plot reasons.

–You have a pet eagle who doubles as a surveillance drone, down to even the distract bystanders part.

And now, let’s point out both game’s main differences…

-Both game’s stories are different, duh. Assassin’s Creed Origins is the story of Bayek and Aya who help shape the first Assassin’s Order. And it’s set in ancient Egypt as we’ve mentioned already.

Assassin’s Creed Odyssey stars either Alexios or Kassandra; you get to pick either or for the whole course of the story. Either one of them possesses the pretty special spear of Leonidas which is a First Civilization artifact. You remember the First Civilization right? They were mentioned quite a lot in the previous AC games prior to Origins. In fact, there will be a ton of side-missions that focuses on that lore.

-AC Origins was developed by Ubisoft Montreal, whose last AC achievement was AC IV Black Flag. AC Odyssey was handled by Ubisoft Quebec; you may remember that offshoot as the folks responsible for AC Syndicate back in 2015. 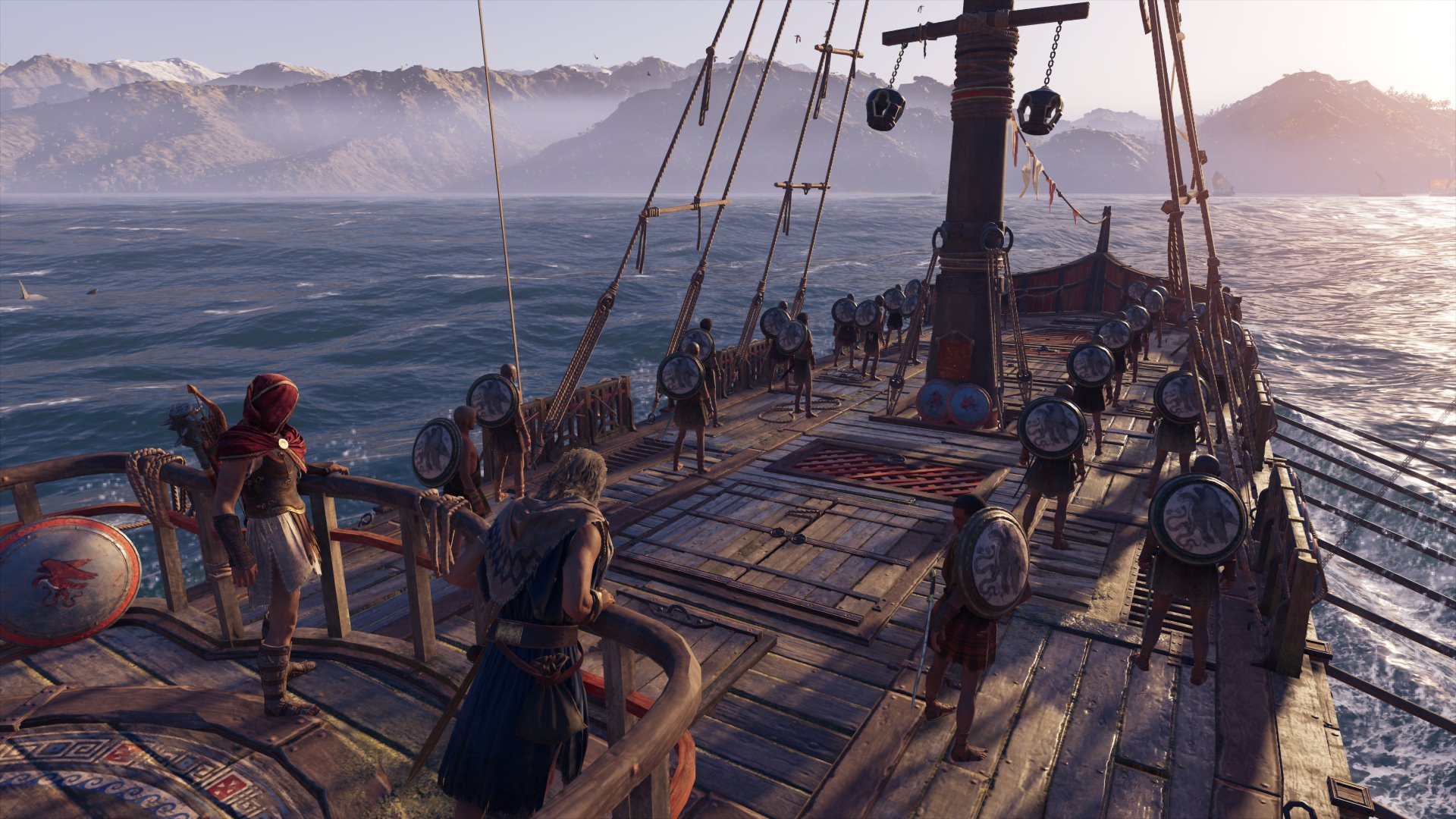 -AC Origins had naval battles where you control Aya in small stages. In AC Odyssey, you have full control over your giant ship, your crew, and its upgrades.

-There’s a lot more emphasis on territory in AC Odyssey compared to Origins. Since there’s a war between Sparta and Athens, you get to fight for either side in a big-scale battle stage and control who gets more territory throughout your single-player campaign.

-AC Odyssey has a huge emphasis on role-playing. You get to pick what Alexios/Kassandra say to people and get the chance to sleep with numerous side characters. Sidequests and gear collection are also more prevalent in this game compared to AC Origins.

-Exploration is handled way better in AC Odyssey. See, AC Origins made it too easy for players to track their objectives and complete them. In AC Odyssey, you can choose either guided mode or exploration mode. Pick the latter, and you’ll have a much better experience in the open world space of Ancient Greece. 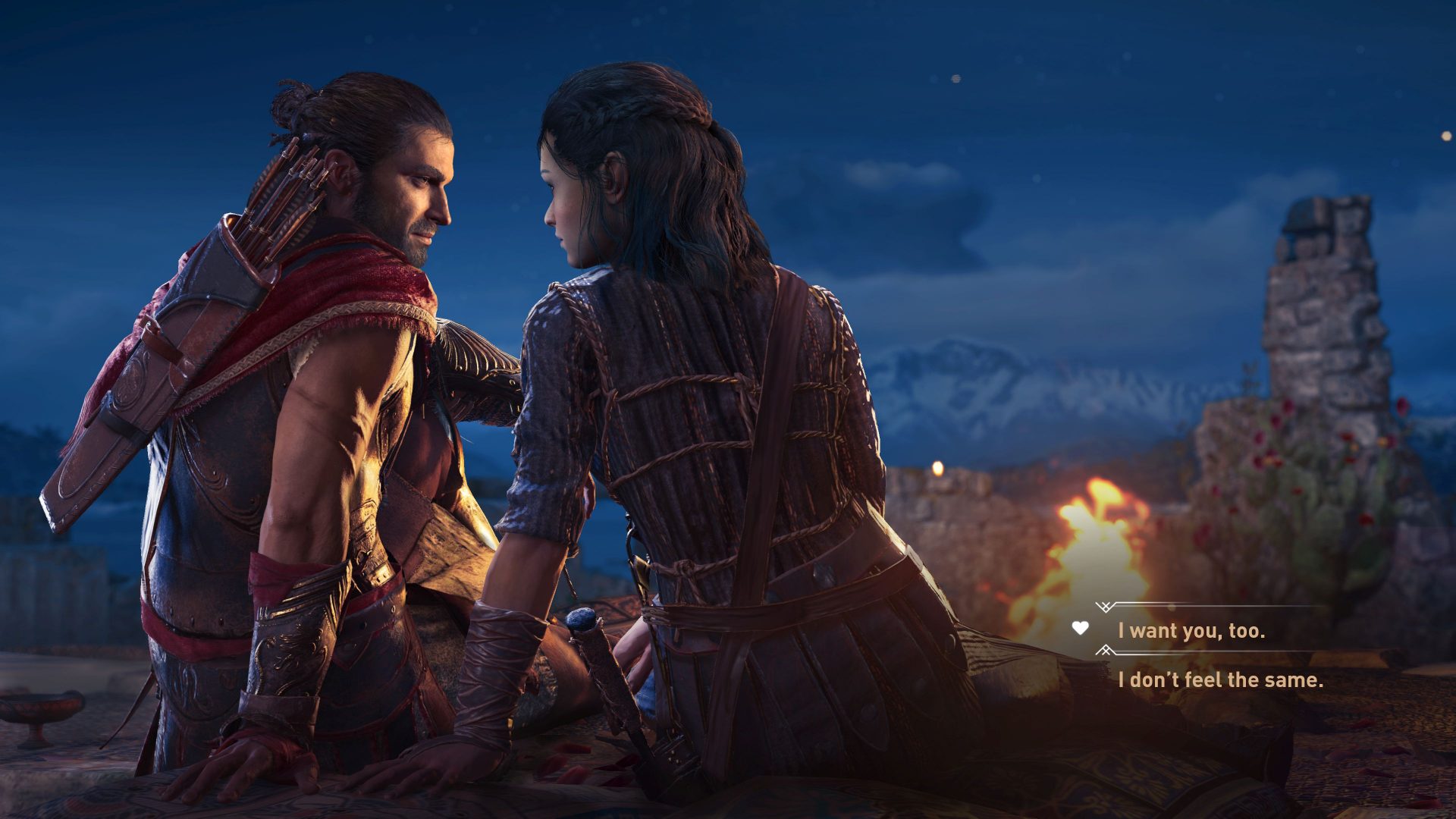 –AC Odyssey’s ability specialization means you can either be a kickass archer, an aggro warrior, or a sneaky assassin tailor-made for the series. While in AC Origins Bayek can still do one-hit kills from afar or close-ranged, but unless you spend time farming for materials, he won’t one-hit kill a majority of high-levelled enemies. This can result in unintentional giant brawls that could have been avoided.

-AC Odyssey has gear slots. Unlike AC Origins where you collect one ensemble outfit and call it a night, you now have to collect helmets, chest pieces, lower body armour, gauntlets, and footwear. If you love accessorizing in your RPGs/open world games, you’ll enjoy AC Odyssey.

-AC Origins had missions that don’t scale. AC Odyssey, on the other hand, has missions that level up with you.Â Every region onÂ Odysseyâ€™s map has two numbers associated with it. Those numbers indicate, in part, how levelled up you need to be to explore the region without getting destroyed.

If youâ€™re in a region and start levelling up, the quests in that region will level up with you. Enter a level six zone at character-level six and then improve to seven, and any level six quests you grabbed in that region become level seven quests, complete with tougher enemies.

If you hit the max level for the region and playing at normal difficulty, then quests will keep levelling but will lag some and eventually stay two levels behind your character, no matter how high you go, at least according to Ubisoft.

-AC Odyssey has more quest variety than AC Origins. The latter has main quests, sidequests, and timed events not unlike your F2P mobile games.

AC Odyssey changes up the structure of these quests so that they feel a tad more organic progression-wise. You have your main quests, your side-quests classified as “character” and “world” missions. You also have timed bounties that last a day or two and simple contracts which require you to collect a certain amount of wolf pelts or sink a number of ships for example. The bounties and contracts do replenish frequently, so if you feel like killing time, you might as well get a reward for it via these options.

Speaking of bounties, you can have wanted marks placed on your head if you choose to cause mayhem to armies and innocents. The more wanted levels you have, the more mercenaries and hunters will come after you while you’re in a middle of something.

-AC Odyssey has choices and consequences, while AC Origins does not. Since you’re shaping the story of a totally new protagonist who has little connection to the AC Assassin vs Templar storyline, your narrative can branch out a tad bit for different outcomes. If you turn a stealth mission into a bloodbath, you can get chided by your mission handler for making a ruckus and leading the enemy back to his faction.

Hope that clears everything up about the latest Assassin’s Creed title. Stay tuned to Kakuchopurei for our full review and ever-evolving guide! 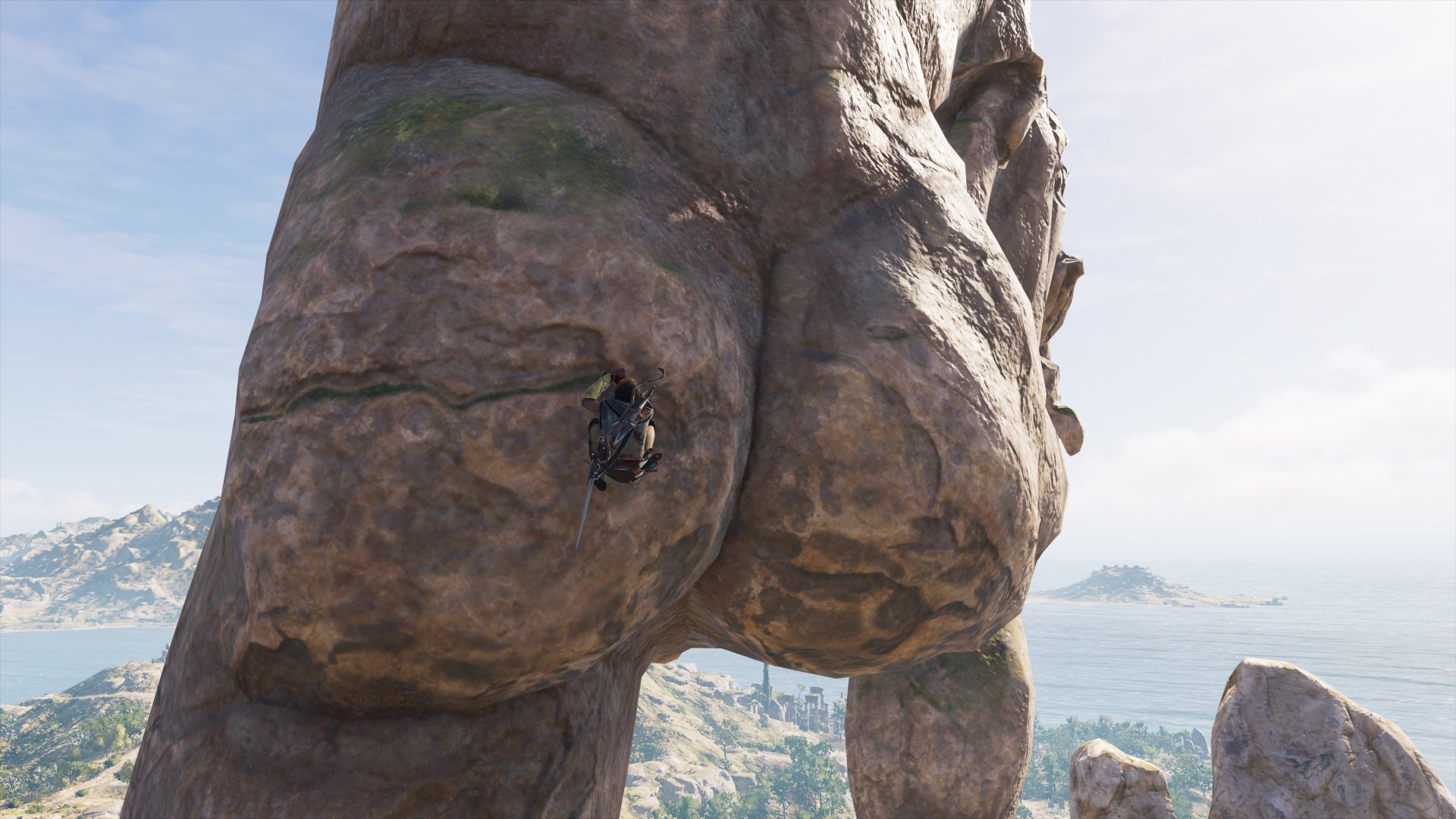 This version of Assassin’s Creed Odyssey is played on a Dell Alienware Gaming Laptop.Â

There's going to be a new kid on the school block, and it's challenging the Shin Megami Tensei and Persona series' space. The teaser website for a ...

Marvel Studios unleashed the second spoilerific trailer for Spider-Man Far From Home two days ago filled with several bombshells, one of which seems t...

Square Enix has confirmed that Studio Istolia has officially closed down and with it, Project Prelude Rune has been canceled. This comes just after st...

Leave a Reply to Assassin’s Creed Odyssey Is A Greek Journey Worth Taking – KAKUCHOPUREI.COM Cancel reply