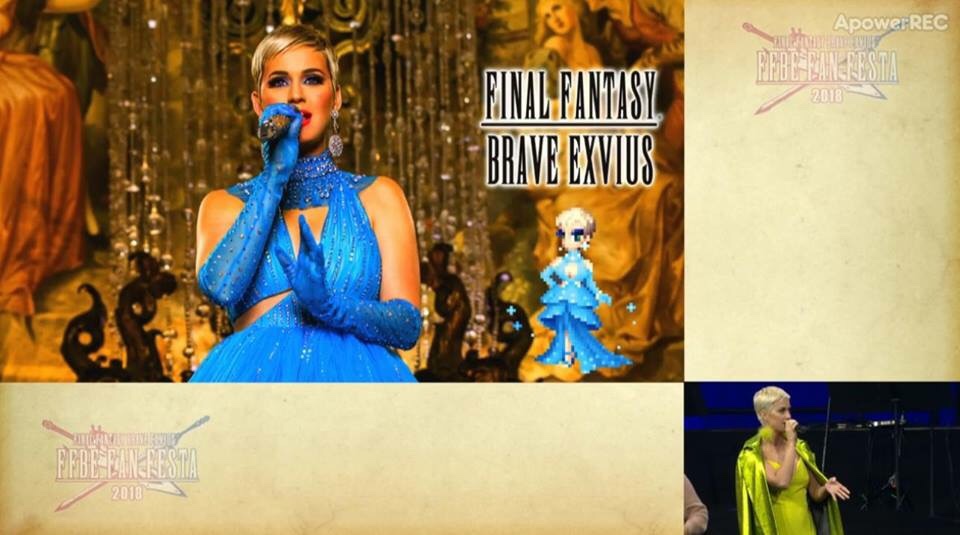 Nope, your eyes aren’t playing tricks on you. Katy Perry is the next pop star to be in a Final Fantasy game as a guest character. For the mobile gacha-heavy RPG title Final Fantasy: Brave Exvius.

This was announced during the FFBE fan event during the weekend. Strange, I know.

What can this version of Katy Perry do? She can summon strange entities with television heads from another world to fight for her. Oh and she can cast blue spheres of doom. She’ll be available as a free 7-star character on 12 December along with her made-for-FFBE song “Immortal Flame”. We’ll update this post with her attributes & stats once they’re made public.

Previously, Ariana Grande was the first pop star to be in Final Fantasy Brave Exvius to promote her then-new song “Touch It”. She’s a support/magic attacker class, so it may be safe to assume Katy Perry will be using the same role.

This may be a World of Ruin situation for some. But if it means this promo can bankroll more money for more Square Enix RPGs for consoles, then keep at it, I say. I do wonder if Lady Gaga and the reformed Spice Girls might jump into this mobile bandwagon?

[…] The mobile game is also famous for being the first game in the franchise to feature actual playable characters based on real-life celebrities like Ariana Grande and Katy Perry. […]