Have a hankering for the good old days when brawlers and side-scrolling beat-em-ups had simple-yet-fun non-linear level layouts and a simple RPG progression system? Wished that Technos came back from the dead and made a nicer-looking River City game?

Well, we can’t have the latter. But that’s OK because developer WayForward is doing a great job at recreating that kind of game and making it fun for this generation of gaming. River City Girls is proof of that. 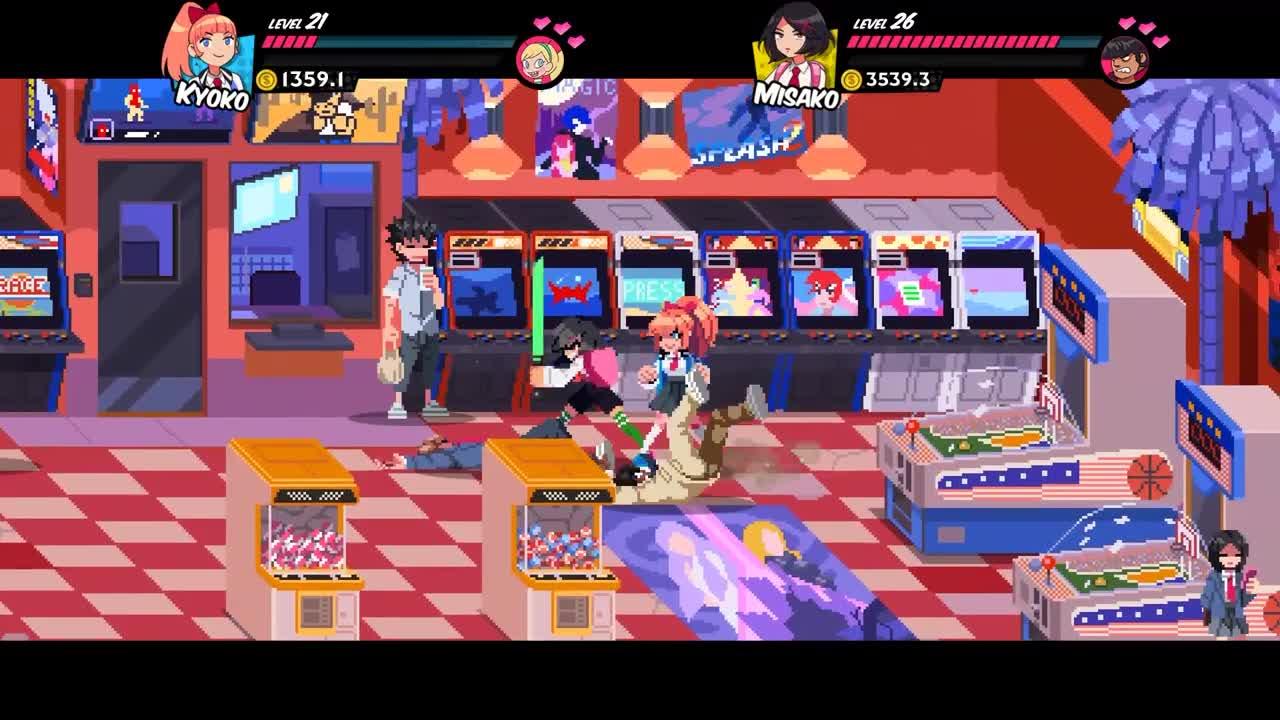 So what defines a Technos Kunio-kun game? Well, it’s a combination of simplistic high school trappings and a beat-em-up RPG hybrid. There’s not much of a plot – it’s a role reversal thing where violent femmes Kyoko and Misako search high and low in River City for their boyfriends. But the manga-styled cutscenes and anime aesthetics make it all the more enjoyable to savour, especially given the fact that our leads think and act as typicalÂ  dumb-but-very-driven high school girls

Gameplay-wise, you go left to right, or down to up, and beat up enemies along the way. The mean streets of River City are full of thugs, violent cheerleaders, and even Terminator spoofs with a mob mentality and penchant of ganging up on you in corners. Fortunately, you have an arsenal of moves like Chun-Li lightning legs (for Kyoko) and wrestling brawler moves lifted from the WWE (for Misako), coupled with great controls and tight fighting. Heck, you can even pick up enemies and use them as weapons just like in the original River City Ransom.

But not initially though!Â  You’ll start off with punches and throws, then as you get money from the battered bodies of your foes, you’ll get to spend them at the city’s plethora of vendors & stores to get said new moves and even stat-boosting foods and amenities. Just like any basic RPG, you can gain levels which give you access to more moves and stat boosts, and even hoard items for later consumption.

New to this Kunio-kun title is the ability to gain recruits. After beating up a foe,Â  they’ll sometimes beg for mercy. Press the L1/Left bumper when prompted to recruit them to your side so that you can call them for an assist attack ala Marvel vs Capcom. You can come up with a bunch of combos and setups just to get the most out of your main character’s attacks.

It’s quite a steep climb to get the money you need to beef up your arsenal.Â  While the first section of the game has a fine difficulty curve, I suspect many players not fine-tuned to old-school grindey level-up-style beat em ups will find themselves losing their hard-earned money by not preparing for a boss fight. Just one protip: spend as much money as possible before approaching bosses.

And once you do get a sizeable amount of offence and stat boosts, the game becomes a cakewalk if you beat the crowding beat-em-up system. It’s just a matter of getting the timings of certain attacks to a tee, like Kyoko and Misako’s Y+B/Triangle+Circle powerful air grabs. Also, this game is manageable with another person. Too bad it’s local co-op only; online play would be nice in a future patch.

Speaking of gang-fighting girls, who should you start off with if you’re going solo here? It depends: Kyoko is a combo queen while Misako is a brawler. I prefer the latter since she hits hard and gets knockdowns quick without equipment help, but if you like chaining attacks, Kyoko and her lightning legs and volleyball scoops can make for simple-yet-effective enemy juggling. 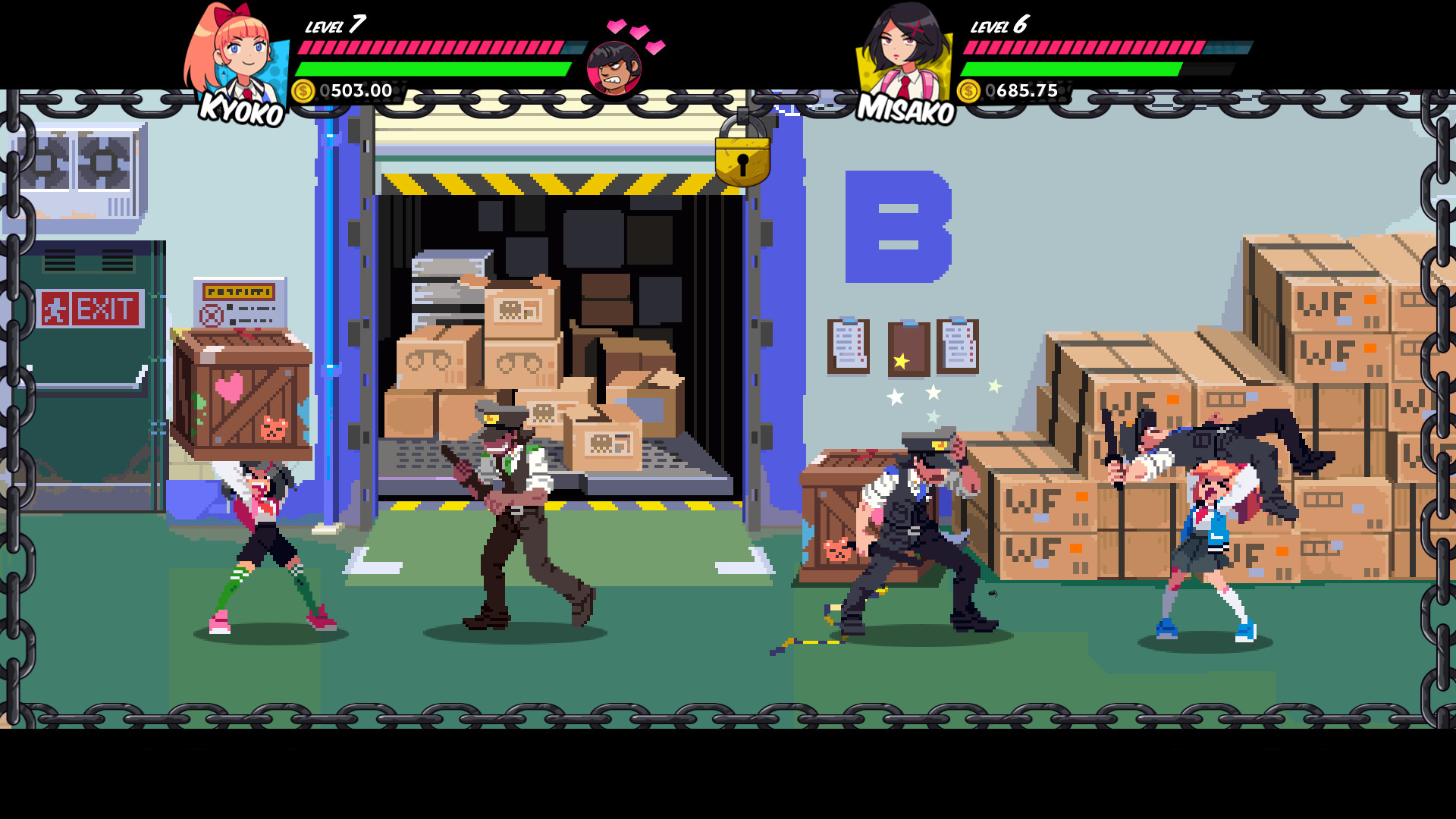 Despite that small caveat, the game’s art style leaves a huge positive impression. Just one look at River City Girls, and you can see the huge labour of love painted on its sprite work and animation. From the eye pops when beating foes to even how the bosses move and show defeat, it’s a testament for 2D animation in games when it’s done right. Even the soundtrack, while bubbly and pop-esque in nature, fits with the game’s cheerful anime motif especially when it breaks out the 80s synths most of the time.

Art may be subjective, but the way this game keeps its 16-bit style while having its character in smooth heavy in-betweens motion is a sight to behold.

Also, if you’re a huge Technos Double Dragon fan and even WayForward’s successful attempt, you will see a good chunk of cameos here and there. Characters from past Kunio-kun games appear as shopkeepers. Even goddamn Skullmageddon plays a vendor role. Skullmageddon!

Once you finish the game for the first time, you may feel as if there’s something missing; like a certain confrontation waiting to happen. Just another protip here: if you want to unlock the real final fight, you’ll need to destroy all 25 Sabu statues in the game. You’ll have ample time to do all that; just use the video below for some help.

If you miss the good old days when Technos wasn’t bankrupt and you had an inkling over what the Double Dragon/Kunio-kun series are, you owe it to yourself to try out River City Girls.

It’s fun to play, it’s best with a friend, and it’s just gorgeous to look at in motion. If you hate brawlers and simple beat-em-ups with a slight grind, this won’t change your mind.

On that note, WayForward should handle all Double Dragon and Kunio-kun games since they know what they’re doing with this entry and Double Dragon Neon. Even publisher and rights holder Arc System Works acknowledges this, what with their piss-poor attempt at a fourth mainline Double Dragon game. River City Girls is enough to make us forget that transgression, and also doubles as a good case for a beat-em-up revival.

Ubisoft is celebrating the 10th anniversary of Just Dance by adding some Asian flavour into the latest iteration of the dancing game franchise. Just D...

News
Here's Your First Look At Fuga: Melodies Of Steel 2

We adored Fuga: Melodies of Steel for its brutal take on war and its rather harrowing-yet-fun turn-based combat system featuring a tank you can sacrif...

Since launch, Cyberpunk 2077 has been bogged by controversy after controversy, with bugs and issues galore. The game has even been taken off the Play...