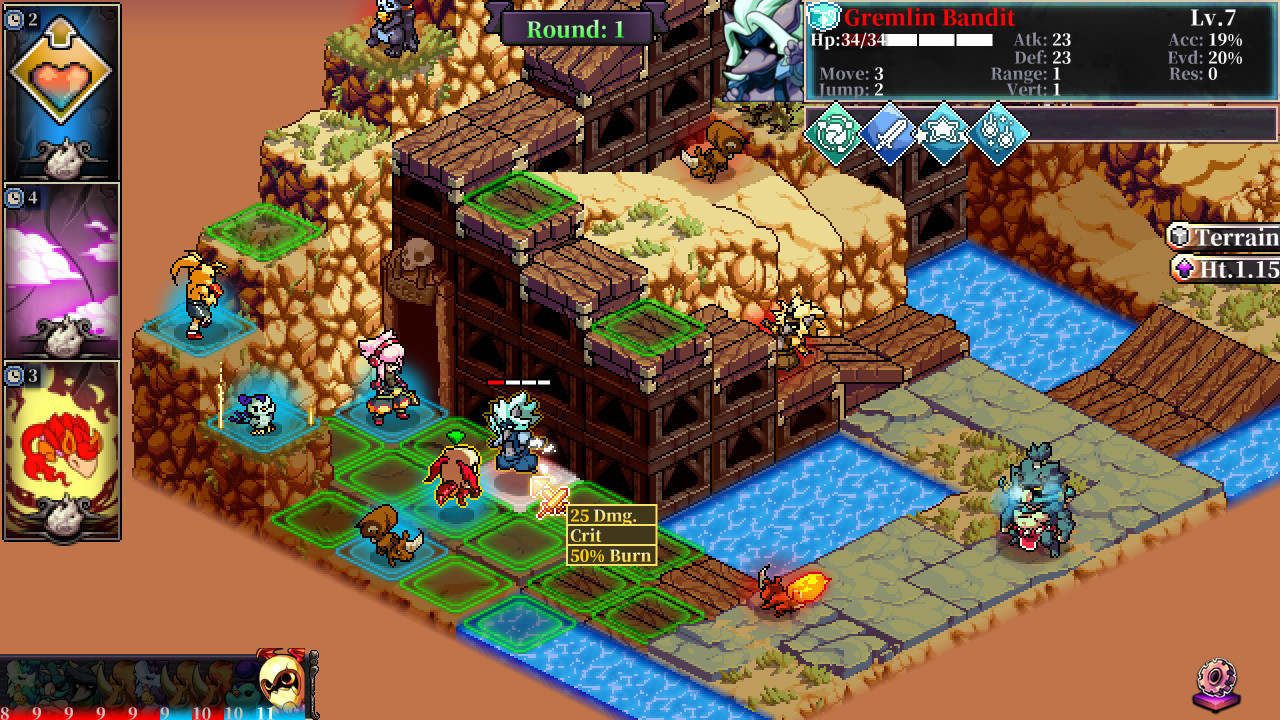 If that turn-based strategy RPG void needs a-filling, and if you’re done with the past Disgaea titles, you may be tempted to try out that Steam store PC tactics title Fae Tactics, a recent indie gem from Endlessfluff Games and Humble Games. It’s not going to replace Nippon Ichi’s treasured series, though it can teach that old dog a few new tricks.

The biggest appeal of its lovingly-crafted nod to 90s RPGS like Tactics Ogre and Final Fantasy Tactics is its minimalist user interface and its simplified controls. The word “streamlined” comes into play here; all your information is laid out without cluttering the screen. You just point, click, and confirm with either the left or right mouse button when prompted.

Each character comes with an attack command, an assist skill, a wait skill, and a reaction skill. No need to rifle through spells and skills; every unique character and unit comes with their own advantages and disadvantages. Best of all, the game has a few nice additions to keep combat going smoothly: melee units can follow-up with an attack at a target if they’re close, units can apply buffs when they use the “wait” command, spells can be casted at any time during your turn as long as they their charge time is complete

Of course, this doesn’t mean the challenge is simplified, oh no. Battles can be taxing if you don’t pick the correct spells, summon units, and heroes

However, they tend to go really quick on its default speed. Yes, you’ll be spending 20 minutes and beyond for a single turn-based battle, but half of the time won’t be on confirming and shuffling through menus. Instead, you’re mostly thinking on how to tackle the stage and kill off enemy leaders in the most efficient way possible. The best moments of Fae Tactics involve you outmaneuvering the enemy and defeating bosses who summon seemingly endless waves of foes.

My favourite bit? Leading an enemy leader from his pack, then attacking him from behind by positioning my melee units to set up a combo via pinging him with ranged attacks. Pretty soon, he was dead before his buddies could help him, thus ending the mission.

But what about the game’s tale? Well, there’s a main plot involving our star character Peony and her search for her mom, leading to an eventual human and fae war that’s common with these fantasy JRPGs. But it’s quaint and cute, mostly because of its more entertaining side stories.

One mission involves you protecting a bakery because its precious cookies are being stolen, while another involves a chicken boxer beating up a corrupt fantasy mafia bookie. My protip here: take your time with these. Not only do they beef up your characters good (via the Traits system), but you’ll get extra useful companions to play around with.

It’s a pity that there are mandatory missions that require you to play through multiple stages (usually two to three regular stages plus a boss stage) without any opportunity to save mid-way. In these endurance bouts, you cannot even keep your progress. If you quit halfway and head back to the level selection screen, all your progress on that stage is lost. Which means you’ll have to pull through and complete each bout and also prep beforehand.

At least if you fail, you’ll only start at the beginning of the current stage you’re in. As old school and as “fair” this system can be for old-school JRPG players, it starts frustrating you if you’re playing some of the NPC protection missions where the AI doesn’t follow your battle plan. They’ll sometimes run away and be out of range from my healing abilities and companions, meaning I have to add in a healer or two in my team: one for my assault group and one specifically to chase down the NPC.

Its customization options doesn’t go as deep as the aforementioned SNES/PS1 strategy RPGs I mentioned; apart from Traits and spell management, there’s no other way to customize summon units, and no way to tweak your favourite leader’s equipment. It’s deliberately streamlined, but more options would be nice.

Nonetheless, my drive to keep playing the game to the end and just experiencing its charm isn’t deterred by these foibles. Fae Tactics is clearly meant for old-school gamers and even sorta-new turn-based gaming fans who want to experience a 90s style of gaming with a 2020 touch. It’s not a huge reinvention, but it’s an enjoyable diversion.

Borderlands 3 Arms Race Is So Much Better With Friends