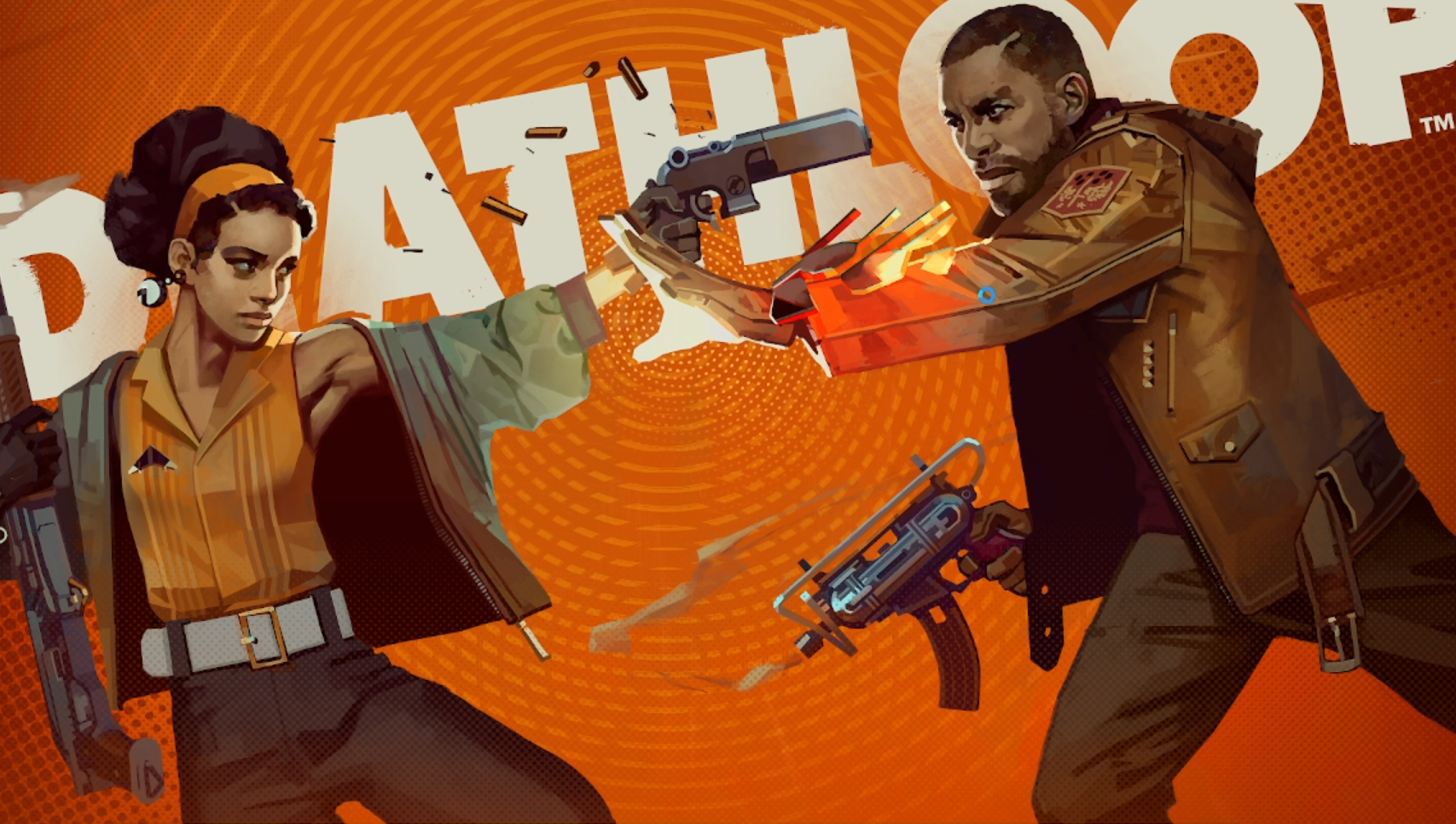 After its many lessons with the Dishonored action games, Arkane has figured out a way to make its open-ended first-person action games a bit more challenging and making reactive decisions a lot more meaningful.

How? By removing the ability to “savescum” your way out of a level while you’re in it.

See, Arkane’s latest first-person shooter Deathloop may seem familiar to the adventures of Corvo, but aside from the 60s retro future-themed pulp action aesthetics, the plethora of guns, and the time looping storyline, your main character Colt has to restart his progress if he dies a good amount of times on the stage he’s on.

Narrative-wise, Colt has to kill all the Visionaries on the island he’s stuck in to escape within a single day, thus breaking the Loop. He has to find information on the island that enables him to alter and manipulate the course of the day to complete his objective. You know, just like Bill Murray’s character in that Groundhog Day movie the game is clearly inspired by.

The catch? He’s hounded by the island’s head of security Julianna whose objective is to murder Colt and prevent him from breaking the Loop. If you die a number of times in a single run, you have to restart the entire day and Loop. And you only have four main attempts per Loop divided into the Morning, Noon, Afternoon, and Evening. With the game’s different time cycles that rearranges & mixes up enemy placements/frequency, and different active areas and sections open/closed, all taking place in four of the island’s main areas, that’s a ton of variables and things that can go wrong during your Loop playthrough.

Whether it’s an enemy blindsiding you with a sniper shot as you attempt that one ledge jump, or Julianna appearing behind you and then force-pushing you off a cliff, or setting off a landmine that’s placed close to health packs that’s set up by her, Deathloop gets very challenging past the obligatory tutorial sections and training wheels portion. By taking away that one safety net you can fall back on (the ability to save mid-playthrough) and death meaning you lose your equipment, your trial and error tactics and gambits hold a lot of weight. You’ll have to approach things a lot more cautiously. No pressure, right?

Fortunately, you only have four main areas and day cycles to worry about. Outside of Julianna and yourself, no one else remembers the events from each Loop that transpired, meaning enemies and Visionaries will go about their day.

Dying isn’t the worst setback, as Colt and the game will keep track of the information you’ve learned. Again, like its inspiration except for the violently killing people part. You’ll learn more about each of the game’s interesting Visionaries, their quirks, their dislikes and whatnot, and their habits and patterns. Ransacking rooms for emails and journals will be one of the few highlights to get closer to your goal.

Defeating them also nets you their Slab powers which range from teleportation to linking enemies together to share pain. Sure, it’s Arkane falling back to what they have prior, but they’re still super-fun to use.

After a certain point in the game, you get the ability to keep your loot and skills. You’ll need to collect Residium to infuse weapons and powerups from Trinkets so you can carry them over for future Loops. You can’t just rely on the standard weapons on the island since they jam regularly while you’re shooting; you’ll need to keep an eye out for Purple and Gold rarity weapons that give you different perks like life-stealing or “poison” damage, and also save up Residium to infuse them for future Loops and runs. It also helps that Cole’s stealth melee attack is an instant-kill, no matter who he’s targeting.

You’ll also remember vault room codes and special gadgets that you can manipulate that can help solve Colt’s conundrum; the entire island and its four sections are just a bagful of death-themed puzzles with different methods to solve them.

For instance, I needed to get a voice sample of a certain Visionary to help send over a fake invite to bring another Visionary so that they end up in the same location, making them convenient to kill in a single Loop and day. However, the code to the vault is only accessible in another part of the island at a particular time of day.

Furthermore, the voice sample is in a form of a statue that cannot stop talking, and I needed to bring it over to a computer to create that fake invite. While my basic stealth approach is all but gone, I can still use the toy to distract oncoming guards. There are various solutions to this puzzle (which we’ll probably see in a few days’ time), which also involves finding a way to vaporize every single person in the designated area using that same computer.

There’s even a segment where you’re “depowered” and cannot use your Slab powers; that also includes the ability that lets you die up to three times before the Loop resets. This bit requires you to play stealthily, or at least find another way to bypass this restriction through creative exploration.

There are many quirky situations that will require you to revisit many parts of the island to make Colt’s grand plan come true; like a blood-coated Rube Goldberg contraption being set up. At the same time, you’re conditioned to remember enemy placements, meaning that the more you play, the better you get at taking shortcuts and speedrun (and speedkill) your way through things. Plus there’s also the game’s method of displaying white text telling you (and reminding you) what’s up and where to go. Arkane has done a lovely job of telling its witty story and narrative.

Colt and Julianna’s back-and-forth on their respective intercoms are a mix of humour and wit, and also reveals the nature of their relationship as you delve into Deathloop’s plot. And as stated before, each Visionary is a colourful bunch. You’ll probably hate them, but you’re killing them all the same. And you may even have voyeuristic tendencies to see how their interactions with the world and with others play out.

I do enjoy Deathloop’s controls and shooter-exploration hybrid gameplay, even if it may be a tad familiar to fans of Dishonored and Prey. As a fan of playing a hit-and-run assassin, I cherish the Shift Slab powerup, the Karnesis telekinesis powerup (to push people off of ledges), the double jump Trinket, and a couple of long-ranged guns and combat power-ups to cater to my not-quite-aggressive-but-kinda-trigger-happy playstyle. I’m just jumping from rooftop to rooftop, disabling security systems with my Hackamajig (that’s what your be-all-end-all tech tool is called, seriously), and stealth-killing goons whenever the situation arises. As well as being able to hightail it when too many guards and alarms are firing and ringing.

Even this method isn’t foolproof as Julianna can crash your infiltration party and set up landmines at places you thought were safe. Oh, and she can also teleport, use telekinesis, and do all that other stuff you can do. I lost count how many times I died just bum-rushing my way from Julianna, only to set off a proximity mine close to the exit (or my usual escape routes) courtesy of the island head of security.

What I love about Deathloop is that it will always keep you on your toes with its surprises and its day/night cycle changes. The game can get unpredictable which means you need to be reactive with your powers at times and during situations where flight is better than fight. Then again, I did manage to survive some runs with the Frenzy Slab powerup that makes me deal more damage while taking less, along with some Slab upgrades that heal me from Frenzy’s damage thanks to me killing one of the Visionaries multiple times.

Oh, and there’s also a multiplayer mode that lets you play as Julianna, who has to kill Colt to protect the Loop. Basically, it’s a PvP online mode where you fight any player (or friends) using Colt in their playthroughs, and you’re just invading them for Hunter points, which you can trade for cosmetics & perks. We’ll let you know on a separate column how it is as this mode is more effective with actual players who’ll be playing the game this week. AI-controlled Julianna with Frenzy and Karnesis is scary enough as it is.

Deathloop is an elaborate puzzle game that’s majorly about efficiently killing people & getting out of the island unscathed. It’s humorous, it’s eye-catching, it’s familiar-yet-fun, it’s well-designed to a tee, and it shows that Arkane is still the king of making open-ended first-person action games with multiple plans of action and escape routes.

That said, it may not be for everyone who wants a conventional shooter experience. It’s incredibly challenging, it needs you to be careful yet also asks that you take risks in a lot of situations, and there’s a ton of trial and error required for the 12+ hour playthrough you’ll be putting in. And there’s also the occasional brain freeze from the bad guys once in a while where they glitch out and stand around doing nothing, or can somehow see through walls and find you hiding in a hard-to-reach spot. Thankfully this only happened once or twice.

With Arkane’s ballsy move of taking that quicksave safety net and building an action game around that core while offering a stylish 60s motif, while also not taking itself too seriously, Deathloop is a treasure you need to experience.