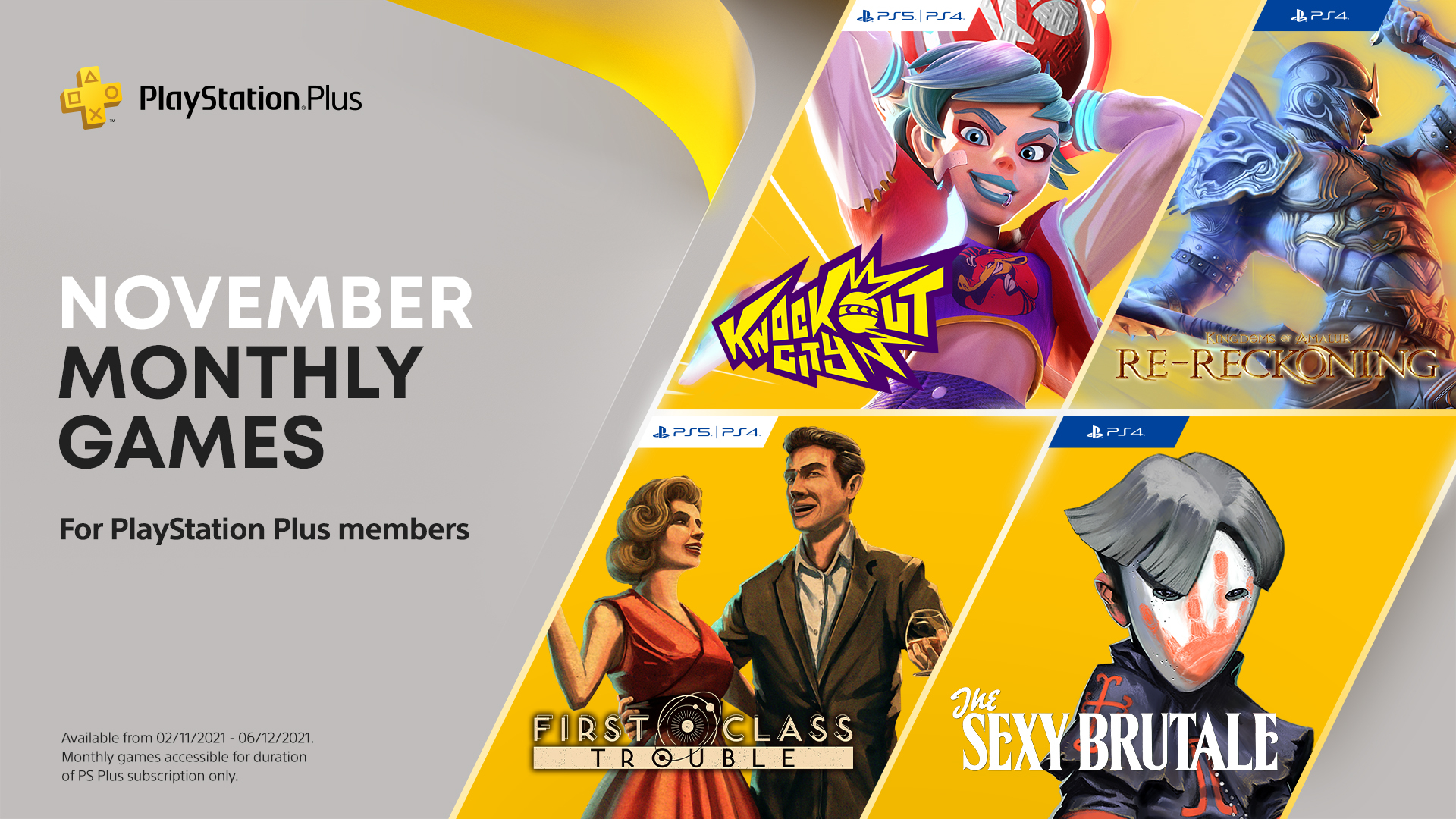 Itâ€™s a bumper PlayStation Plus lineup this November, with six titles in total available to add to your game library starting Tuesday, November 2. Partake in an epic dodgeball tournament with Knockout City, play sleuth and spot imposters in social deduction game First Class Trouble, then wield weapons and battle monsters in the fantasy world of Kingdoms of Amalur: Re-Reckoning.

And to celebrate PS VRâ€™s 5th anniversary, this monthâ€™s PlayStation Plus lineup will include two bonus PS VR titles. Survive the horrors aboard a procedurally generated spaceship in The Persistence and showcase your sword skills in roguelike Before The Fall.

Knockout City, First Class Trouble, Kingdoms of Amalur: Re-Reckoning and The Sexy Brutale will be available to add to your game library until Monday, December 6. The Persistence and Until You Fall are available until Monday, January 3.

Team up and duke it out with rival crews in style as you settle the score with epic dodgeball battles online*. Brace yourself for outrageous fun and intense competition in an all-new take on team-based multiplayer games. Customize your character and form a crew with friends to start your Knockout City takeover. Knock out opponents with trick shots and coordinated teamwork while dodging and catching balls flying across the map. No ball? No problem! You can literally ball up, roll into a teammateâ€™s hands, and become the ultimate weapon.

First Class Trouble is a social deduction party game where six people play together online* aboard a luxury space cruiser. At the start of each game, four players will be randomly selected to be Residents, cooperatively trying to shut down a rogue A.I. at the heart of the ship. The other two players will be Personoids, who will lie, deceive, and do whatever it takes to stop them! Teamwork is the key to survival, but who can you trust?

From the minds of the bestselling author R.A. Salvatore, Spawn creator Todd McFarlane, and Elder Scrolls IV: Oblivion lead designer Ken Rolston, comes Kingdoms of Amalur: Re-Reckoning. Remastered with stunning visuals and refined gameplay Re-Reckoning delivers intense, customizable RPG combat inside a sprawling game world. Uncover the secrets of Amalur, from the vibrant city of Rathir to the vast region of Dalentarth to the grim dungeons of the Brigand Hall Caverns. Rescue a world torn apart by a vicious war and control the keys to immortality as the first warrior ever to be resurrected from the grips of death.

The Sexy Brutale is a 3D Puzzle & Adventure game, a never-ending masked ball featuring intrigue, murder and the quite possibly occult.

The Persistence challenges you to survive aboard a doomed deep space colony starship in the year 2521. Stranded, malfunctioning, and caught in the inexorable pull of a black hole, â€œThe Persistenceâ€ is overrun with a crew mutated into horrific & murderous aberrations. Itâ€™s down to you, a clone of security officer Zimri Eder, to make your way deeper in the decks of The Persistence to repair the systems and prevent the ship from being torn apart. Gather resources, upgrade abilities and fabricate an arsenal of weapons in this brutal sci-fi horror rogue-lite.

Fantasy and synthwave collide in this physically active PS VR sword fighting game. Grow stronger as you battle through an awesome neon environment and strike down magic-infused monstrosities in this hack-and-slash roguelite. Move your arms and body to the synthwave soundtrack as you attack, block, cast spells, and dodge your way deeper into the heart of a neon fantasy world filled with magic-infused monsters. Equip yourself with a variety of gameplay-altering weapons as you continue to gain strength and strike down the monstrosities that lurk throughout this mystifying world.

Tags: First Class Trouble, kingdoms of amalur re-reckoning, Knockout City, PlayStation plus, PS Plus, The Persistence, The Sexy Brutale, Until You Fall