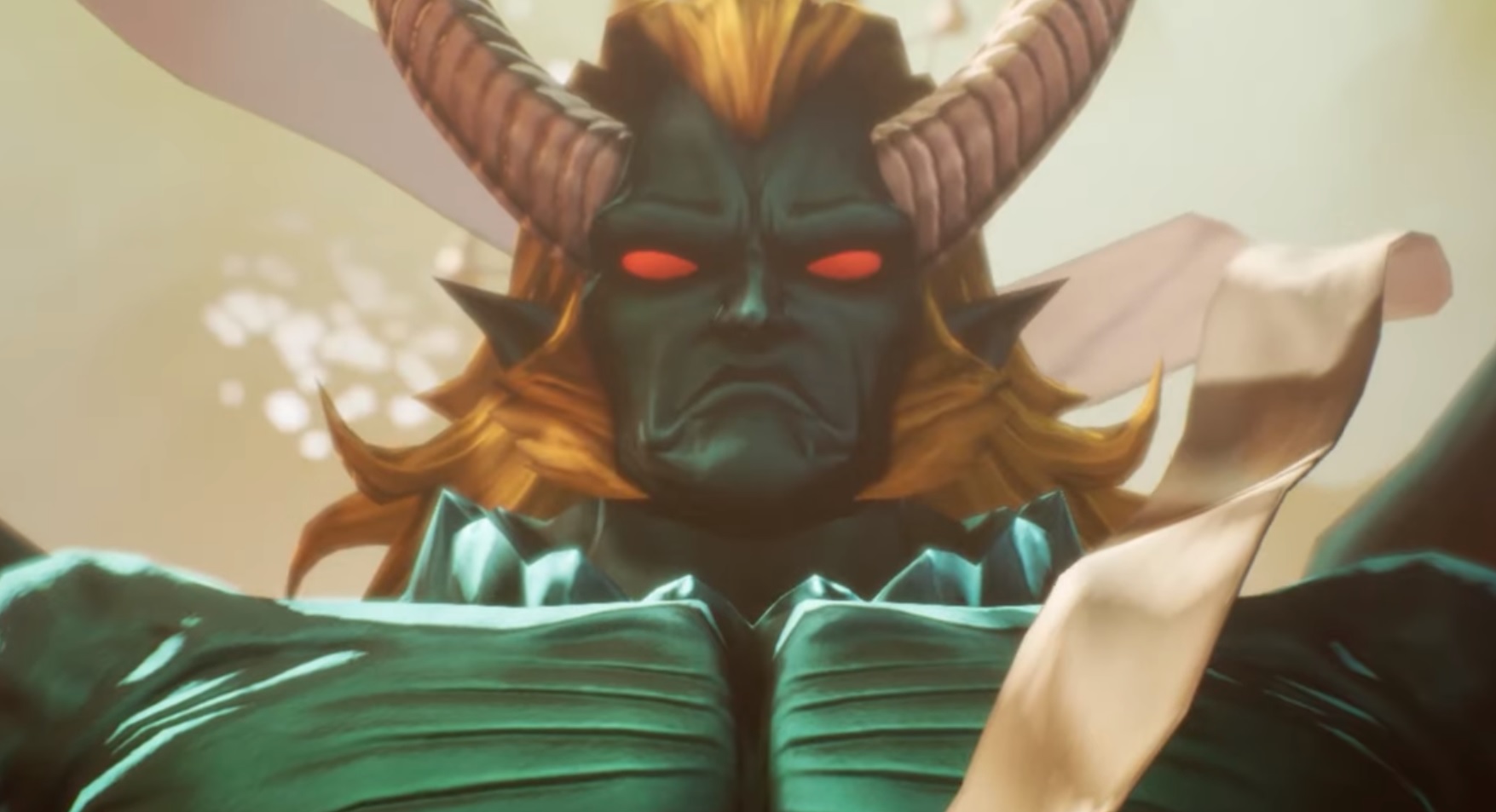 This guide is still under development.

Shin Megami Tensei 5 is out now for Nintendo Switch, and unlike its Persona cousin, this RPG will relentlessly kick your ass time and again if you don’t master its combat system and its demon fusion/essence fusion mechanics quick. The game’s bosses will be your stonewall of progress, challenging you with hard-hitting attacks and making you build a party-specific to counter said stonewall.

Luckily, we’re here to help. This boss guide will be touching on the main story’s many fights, so there will be spoilers. You’ve been warned.

This is the first major boss of the game, residing near Tokyo Tower. It’s pretty tough if you aren’t prepared for it.

Protip: Build a team that can block Dark and Fire attacks. After some Miracle buffs and upgrades, use the Daemon Essence fuse on your main character to give him Fire and Dark protection. For Ice attacks, the Mermaid’s unique ice attack can help get you some turns.

You’ll fight this new demon as the game’s second boss, in the Tokyo Diet building. She makes Hydra look like a joke in comparison. She has a super-powerful Magatsuhi gauge attack called Sacrifice of Clay that will annihilate your party.

Protip: Buy as many Force Dampeners from Gustave (the creepy shopkeeper from your save point). This will cancel out the Sacrifice of Clay attack as soon as her meter is filled up to activate the skill. Get your main character to level 20 or above so that he can get demons to fuse for Jack-o’-Lantern.

Aitvaras is also a good demon to have since its unique skill is an Agi spell with a chance to inflict the Mirage status effect. Resistance and immunity-wise, demons like Shiisaa can help nullify Nuwa’s attacks. If you’re feeling lucky, get Fortuna on your team since she can nullify Force attacks but is vulnerable to Electric.

The third boss fight that many players may have trouble with. This wolf’s at the Container Yard and can be a pain if you do not have the proper party to deal with it. Loup-Garou has big damage physical attacks, a painful single target Electric attack, and a buff that gives it a guaranteed critical that will not miss.

Protip: Build a party that has Ice and Light skills to exploit Loup-Garou’s weakness (like Jack Frost’s Bufula), as well as have attack-lowering skills like Rakunda and accuracy-lowering skills like Sukunda. Bring Electric Dampeners to nullify the wolf’s Souffle D’eclair attack when you see it charging up Magatsuhi.

You want to debuff the wolf’s attack strength and hit rate so that you get more turns. If you can somehow level up to level 29 at this point in the game, you can gain access to the demon Shiki-Ouji who is resistant to physical attacks and has Light skills. You’ll also want Oni in your team, then make him use Taunt to get Loup-Garou to target him for all attacks.

You’ll fight this handsome warrior at Mitatebashi. He has quite the physical arsenal, as well as at a Maragion all-targeting fire attack that only unleashes as a Magatsuhi attack, so at least you know it’s coming.

Protip: Bring in demons like Mothman and Lilim as they have Electric attacks to hamper Fionn with. Cironnup is a good choice as it can resist most of Fionn’s attacks and use Blinding Strike to lower Fionn’s Accuracy/Evasion. Also, give Nahobino resistance to Physical attacks to give yourself a fighting chance.

Generally, you want to lower Fionn’s Accuracy to make him miss and lose turns.

Not the early scuffle with him, but the true fight at the end of the second world in Shinagawa Station. This abomination is a multi-target boss, since it has a head and tentacles for you to deal with. This is also a two-parter fight, meaning you’ll need to have some demons on reserve to switch to since the initial ones in your party will have run out of mana and not have the skills to deal with the boss’ second form and its new weaknesses.

Protip: All of Lahmu’s attacks are single-target skills. Lahmu’s biggest damaging skill is Babylon Curse; it restores each Lahmu Tentacle that isn’t dead yet and inflicts Mud (which subtracts one turn from your total turns for the round). Mazanma and Wind Breath skills on demons are best against Lahmu and its Tentacles. Also, give your main character the Manananggal essence which protects him from Dark attacks.

This is only one phase of the fight, so prepare demons for the second part as well before approaching this major boss battle.

Protip: You’ll need to switch out some of your demons to combat this version of Lahmu, since your initial demons may be out of mana. Silt of Ruin not only hurts, but also lowers Accuracy and Evasion. All of Lahmu’s spells here hit pretty hard, but at least Mud isn’t an issue.

You’ll need to have strength and accuracy debuffs on hand, while also getting some Agi spells ready. A demon like Parvati can help keep your party health pretty high thanks to her Media, Bowl of Hygieia, and Heal Pleroma skills.

The man who represents Chaos alongside Nuwa will fight you in Akihabara. And yes, he’s pretty tough with his all-targeting Physical attacks. Just make sure you and your party are at least level 46 before attempting this fight.

Protip: Bring Electric Dampeners to the fight, as well as bestow Physical/Electric resistance to your main character. While you’re at it, give him Taunt, since your party members may not be able to withstand Yakumo’s Physical onslaught and will need you to draw fire. Kannabi Veil (via Aogami Type-5’s essence) is also useful since it reduces damage from Yakumo’s all-target skills.

Roster-wise, you should recruit demons like Parvati (healer with +4 Recovery, Bowl of Hygieia, & Media), Idun, Macabre, Black Frost, Anubis, and Alice. The latter two have Dark spells they can cast to exploit Yakumo’s weakness. Alice may have high requirements for fusion (she’s a Special Fusion), but she’s worth it for the long run.

Protip: Bring demons who can absorb or is immune to Fire attacks. The best demons to bring to this fight are Black Frost and Qing Long, who can cast Ice spells and do not have weakness to Fire. Any support healer you have who has Bowl of Hygieia (via fusion using Parvati) would be helpful. Also, make sure to use any essence that gives your main character some way to absorb/repel/nullify Fire.

Found in Tokyo Station. Make sure you’re packing Force and Dark for this one.

Bring demons with Force and Dark attack like Anubis and Mishaguji. If you can fuse for Lamu, go do that as this demon has nice Dark skills and high stats. Dominion is also a nice demon to have in this fight to tank and absorb Ishtar’s attacks.

Protips: You can use some of the same demons from the Ishtar fight like Anubis and Dominion. For attacks, you can use Yoshitsune who has Physical resistance and Retaliate to sort out Chernobog’s Physical attacks.

Protip: Arioch will summon 2 Decarabias to assist him. You’ll need a team that has Electric and Light since Arioch is weak to the former element while Decarabia is weak to the latter. Bring in demons like Kin-Ki, Nue, and Ose to bring in the Electric pain, while having Kushinada-Hime as support. Bring Ice Dampeners for added protection. Give your main character Ice Resistance too.

You’ll fight this cool angel in the later bits of the story at the Tokyo Diet Building.

Protip: Give your main character resistance to Light, and Counter/Retaliate. Abdiel also only attacks Nahobino, so you’ll need those aforementioned skills and a support demon to keep him alive. You’re also better off bringing a demon that has Taunt to divert attention away from your main character. Demons with Dark attacks and resistance to Light will help in this fight; a demon who can cast Tetrakarn is also useful since it can cast it on Nahobino to reflect Abdiel’s attacks.

The Allfather has the same design and look from Shin Megami Tensei IV: Apocalypse. He’s still weak to wind attacks though. He’s chilling at Komagata.

Gungnir: Unique Skill. Severe Physical attack to 1 foe. Ignores affinity resistance and pierces through.
Charge: Greatly increases the damage of the next Strength-based attack from self.
Concentrate: Greatly increases the damage of the next Magic-based attack from self.
Hades Blast: Heavy Physical attack to all.
Ziodyne: Heavy Electric attack to 1 foe.
Thunder Reign: Medium 2~5 Electric attacks to random foes.
Mabufudyne: Heavy Ice attack to all foes (Magatsuhi attack)
Dekaja: Removes status buffs from all foes.
Omagatoki: Critical: All attacks, including magical attacks, will become Critical hits for all allies for 1 turn (Magatsuhi skill).

Protip: Bring the demon Rangda to the fight, and give her Null Elec and Null Ice. Do this by fusing Lilith and Skadi to give Rangda the skills. Give Rangda taunt as well; with those Null skills and reflect Physical properties, Rangda is the best shield in this boss fight.

Also, bring demons who can attack Odin’s weaknesses like Mot and Fuu-Ki, though give them Resist/Null Elec skills via fusion if possible. Tarunda would be a good debuff against Odin since his physical attacks really, REALLY hurt. When he pulls off the Magatsuhi charge, use Ice Dampeners.

The Greek god of thunder boasts a slick design and some painful moves in this fight at Ueno Park.

Protip: Bring in demons like Futsunushi who have strong Physical attacks. Luster Candy and Light of Order are much-needed stat boosts for this fight. Make sure your Nahobino has resistance to Physical and Electric. Elec Dampeners are a must to avoid Zeus’ Magatsuhi Attack.

Found in Asakusa. Quite fond of status effect skills that can debilitate your party.

Protip: Bring demons like Surt, Rangda, Adramelech, and Okuninushi. Give Rangda Null Ice if possible to nullify Vasuki’s Magatsuhi attack, as well as Taunt to get all that aggro. All of Vasuki’s attacks will bounce back off of Randga. Use powerful Fire-casting demons and protect their obvious Ice weaknesses with Ice Dampeners. Most importantly, bring lots of Amrita Showers and get Me Patra ready to cure all those status effects in this fight.

Can’t have an SMT game without the voice of God now, can we? He’s found at the Temple: Main Hall.

Protip: There are no weaknesses to exploit in this fight; only Physical, Dark, or Almighty skills will deal optimal damage to Metatron. Demons who have these skills include Futsunushi, Thor, Seth, Lakshmi, Kali, and Mara. Light Dampeners are useful to prevent getting critical damage from Metatron’s Magatsuhi Attack.

All The Ratchet & Clank Rift Apart Easter Eggs That We Found