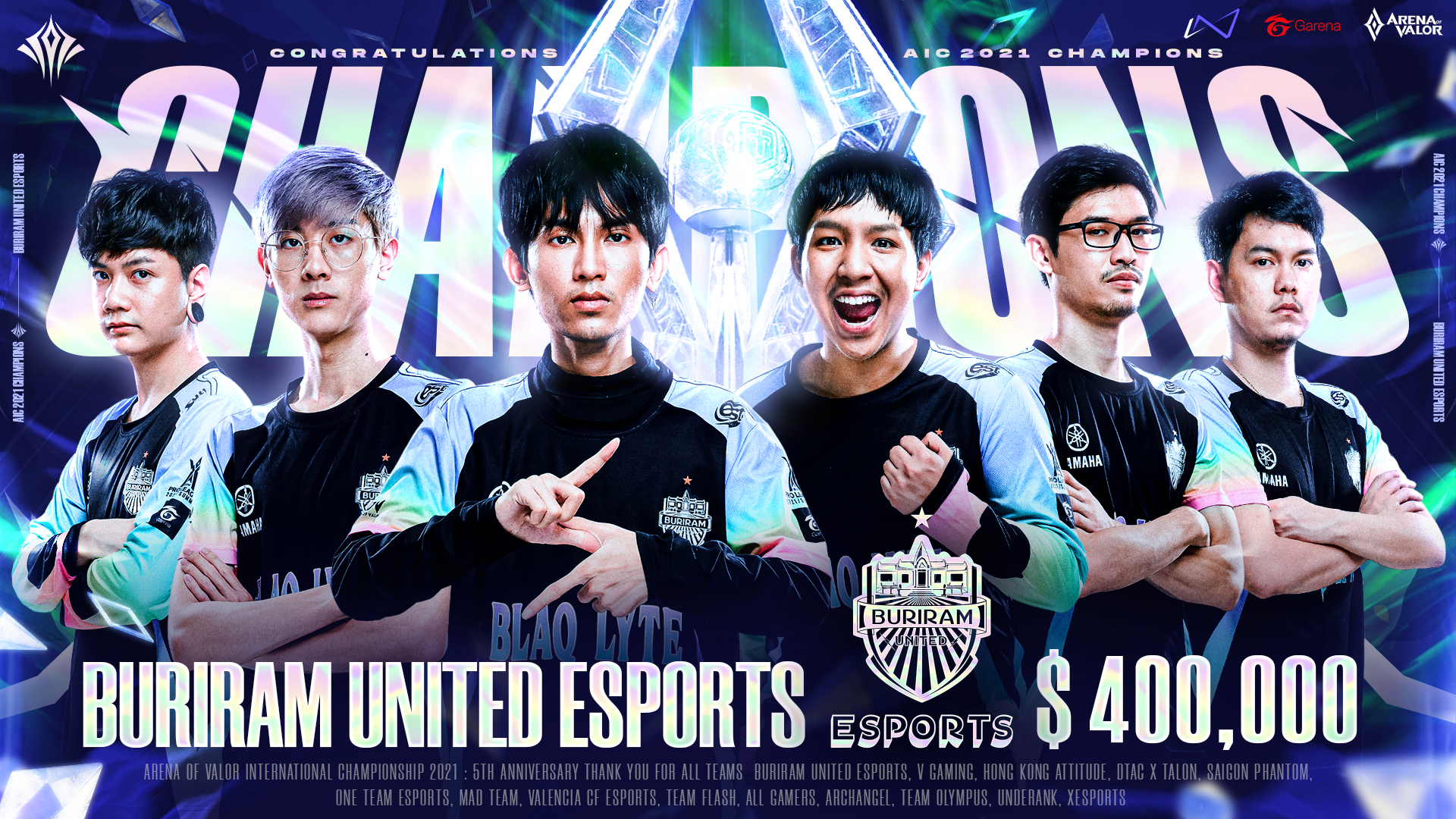 Buriram United Esports from Thailandâ€™s RoV Pro League (RPL) has entered the hall of fame of AoV with a score of 4-3 achieved during the AIC 2021! Buriram United Esports has successfully walked away with the championship title and US$400,000 prize money at the end of a heated and intense season.

Recap Of The AIC 2021 Grand Finals

Over the weekend, the RPL representative stole the show and secured its rightful place as this yearâ€™s champion. The match ended with Buriram United Esports scoring 4 points and second runner up V Gaming from AOG coming in close behind with 3 points.

The AIC 2021 was held virtually and broadcast live to millions of fans worldwide through various streaming platforms including YouTube, Facebook, Booyah Live, and Garena Live. It ended with an all-time high of 879,481 peak concurrent viewers, a 55% increase compared to AIC 2020, according to Esports Charts, who tuned in for the finals. The tournament also boasted over 16,473,220 total watch hours throughout the whole season.

From the beginning, the virtual tournament created an immersive viewing experience for fans and players – the AIC 2021 kicked off with a captivating performance by Yena WaVe, which culminated in a thrilling Grand Final match between Buriram United Esports and V Gaming.

As part of the AIC Grand Finals, the AoV 2022 Esports Update was unveiled to fans and players worldwide on Sunday. Justin Lye, Garena Global Esports Manager, spoke about plans to scale up AoV esports efforts and shared that â€œthe growing passion of the players, as well as the strong support from fans over the past year,â€ was what spurred the team to scale up the level of competition for players in 2022.

AoV pro leagues will also see a similar effect with the prize pools, and the number of participating teams will also increase in 2022. Additionally, a new points system, which accumulates points throughout the year, will be implemented in several regions to assist local teams in charting their path to an AWC spot in 2022.

Pro Leagues To Begin In January 2022

AoV pro leagues will start their first season of 2022 from January until May, starting with the RPL, followed by Arena of Glory (AOG), Garena Challenger Series (GCS), finally, the AoV Star League (ASL) kicking off in February. Winners will then proceed to take their place at AIC 2022. The second season will continue from July to September, where teams will resume their battle for a spot at the AWC 2022.

More details of the matches will be announced in the following weeks. Stay tuned for all the latest updates on AoVâ€™s official Facebook and YouTube pages.

You can download Arena Of Valor on the App Store or on Google Play.

These Four Major Movies Have Been Delayed Due To Covid-19