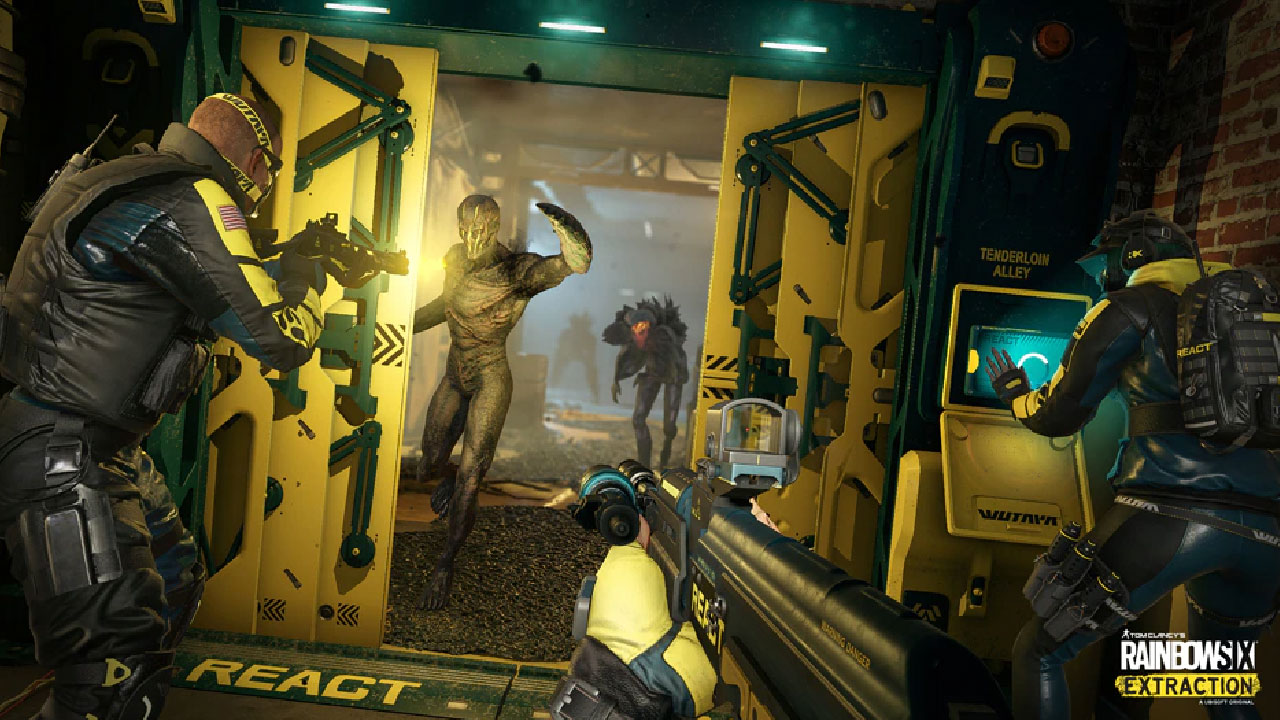 Sometimes I wonder what they’re smoking at the Tom Clancy estate; surely the license holders would not greenlight a story where a bunch of realistic military operatives are pitted against what seems to be space aliens. Yet here we are: a Tom Clancy-branded co-op first-person modern military shooter joint where you gun down an unknown enemy codenamed Archaeans/Parasites (interchangeable in this review-in-progress), that caused a state-wide pandemic, emerging out of the ground like those freaks in Gears of War while having its narrative grounded like its brand.

The question remains though – is Rainbow Six: Extraction fun? Kinda.

First, an overview: you control one of the few Operatives in a group called the Rainbow Exogenous Analysis and Containment Team (REACT), whose sole purpose is to collect information about the outbreak and these new threats called Parasites, as well as deal with them when they start attacking. You do this by going into the field in first-person shooter style and, well, shooting whatever is attacking you and also completing a bunch of science-related tasks for experience and upgrades.

You don’t need to go at it alone though; you and two other Operatives go in with guns and special equipment dealing with various objectives -usually threefold per mission- set in one location that is divided into three segments. When you’re done with one objective, you can either cash out your XP by heading to an extraction point and requesting an exit, or find the airlock and soldier on. If you die, you go into stasis and the Operative you selected is MIA. You will need to select another Operative to go rescue him/her in another mission. They’re usually stuck in a Parasite tree, so you need to pull them out while shooting down pulsating Arch Cells that are travelling through its tendrils-slash-branch-like things.

Usually, these objectives involve you stealth-killing marked Archaeans, defending destruction charges while being attacked by mobs, place trackers on red bulging nests while they’re in slumber, and luring a powerful Archaean to the extraction point where a trap lies in wait. There’s many more other objectives and they switch up regardless of the map you’re on, but they do switch it up in each mission you partake and there’s enough to keep the selection fresh.

As you can tell from the screenshots, Ubisoft is clearly going all out with their alien theme in this military shooter focused on co-op. It’s not just window-dressing: the alien nature of this means you are pretty vulnerable to the Parasite army and can get overwhelmed even on the lowest difficulty setting. See, your Operative loses health pretty fast with each Parasite attack, and they cannot regenerate health back. There are collectable health packs in the map you’re on, but they’re few and far between.

There’s also the addition of Sprawl, a tough biofilm that grows on the ground and ceiling as long as the Parasites are active. The biofilm not only slows you and other Operators to a crawl, but also beefs up Parasite Archaeans. They hit hard enough as it is, and you don’t regenerate back health, so a place with a lot os Sprawl is not a spot you want to be in for long.

The neat thing about all this is that Rainbow Six: Extraction feels like an arcade-like shooter title with a few modern warfare shooter controls and moves thrown in like crawling to emit less noise when moving around, peeking at corners, and going prone when needed. Your Operators also have unique powers; one of them called Sledge can break down certain walls and barricades with his special unique attack, while another Operative named Hibana has a grenade launcher that can be used to either do area-of-effect damage or, surprise, break down walls. Keeping true to the last Rainbow Six game, you can also enforce breached spots with barricades so you can prevent aggressive Parasites from flanking you and your group.

Like I said, the PvE aspect here is fun especially with more people in the fray and it’s short enough for bursts of fun if you feel like going in, doing objectives, and getting out whenever. I get a kick out of playing the game in Cautious and Severe difficulties, dealing with high-tier Parasites and even fighting the boss-like Proteans each with their own challenging patterns and attack mechanics. The random mutations (ie: challenge modifiers) help spice things up, ranging from armoured buffs for nests to cloaking buffs and thick fog effects to obscure Operator visibility. It’s still weird seeing a sci-fi co-op arcade shooter brandishing the Tom Clancy name, but I can’t fault the short bursts of enjoyment I’m getting here.

Down With The Sickness

What isn’t fun however is the fact that it can take a while to grind for experience points to get a good number of Operatives to be at an acceptable level to tackle the rest of the maps and missions. You need to be at a certain milestone number to open up later and prettier areas like San Francisco and Alaska, and to do that means playing a heckaton of single-player and multiplayer missions. Rainbow Six: Extraction feels like the kind of game you need to play in short spurts because going at it long-term will bore the heck out of you.

I cannot in good faith slap on a score until I’ve played a few more online matches during its launch week (20th January) with other people. Games like these live and die by their netcode and how optimal their connections are during co-op matches. I can say however that even with the aforementioned repetitiveness and grinding, there’s a modicum of fun in this military shooter-slash-sci-fi jaunt. For now, chalk this shooter up under the “just fine” category. It’s not quite a Left 4 Dead clone, but more of a Rainbow Six game with a sci-fi spin to it. If you fancy multiplayer PvE shooters with like-minded shooter pals, you could do worst than Rainbow Six: Extraction.

I kinda (or foolishly) expected a more grandiose idea from Ubisoft, but then again, I ask too much from a publisher who is fine with churning out more shooters and assassin games using their open-world engine and playing it safe as a result. If they decide to go all-out with ideas like a proper Beyond Good & Evil sequel or Rayman entry, its gaggle of CEOs would die from the idea aneurysm alone.

by The Nightmare Fog Creeps Into Tom Clancy’s Rainbow Six Extraction Today in May 13, 2022
Reply