Dying Light 2 Guide & Walkthrough: How To Survive The City & Its Zombies

Dying Light 2 is out this week and will sate your open-world parkour action zombie-killing hybrid thirst. It’s really fun, though it can get challenging if you’re not sure what you need to focus on first.

Here are some quick tips on how to survive The City. All inputs listed are from the Xbox controller (Jump is RB, crouch is B, and so forth).

Add Points To Air Kick & Dropkick When You Can… 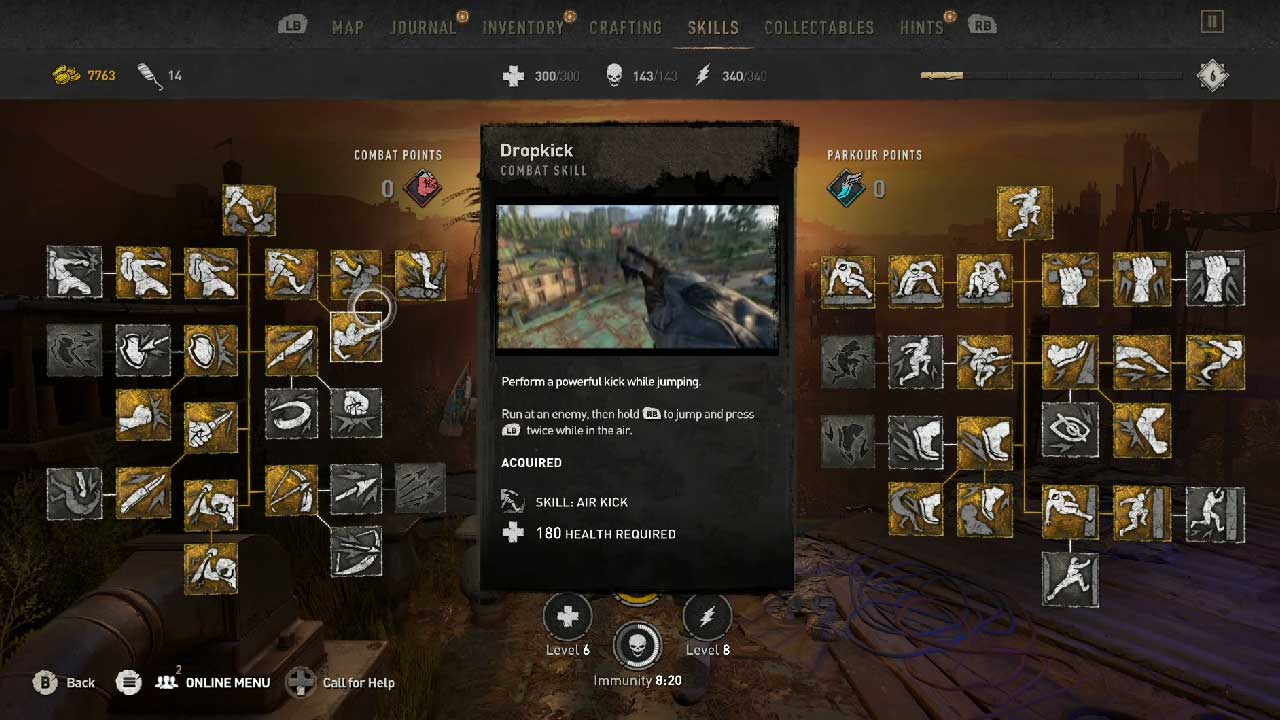 At the start of the game, you’ll have the opportunity to allocate skill points to either Combat or Parkour skills. Dying Light 2’s plethora of quests will let you open up a lot of them for the mid and late game. For the early game, you’ll want the Combat ability to pull off a dropkick from a simple jump. Trust us on this: if your current melee weapon isn’t enough, the random dropkick that hits everyone in a radius will make your life easier during a fight.

The dropkick doesn’t discriminate between zombies and human Renegade warriors; it can knock enemies off of cliffs and knock them down. Don’t use it too much; enemies can dodge your attacks if you are predictable with your attacks.

…And Also Get Active Landing 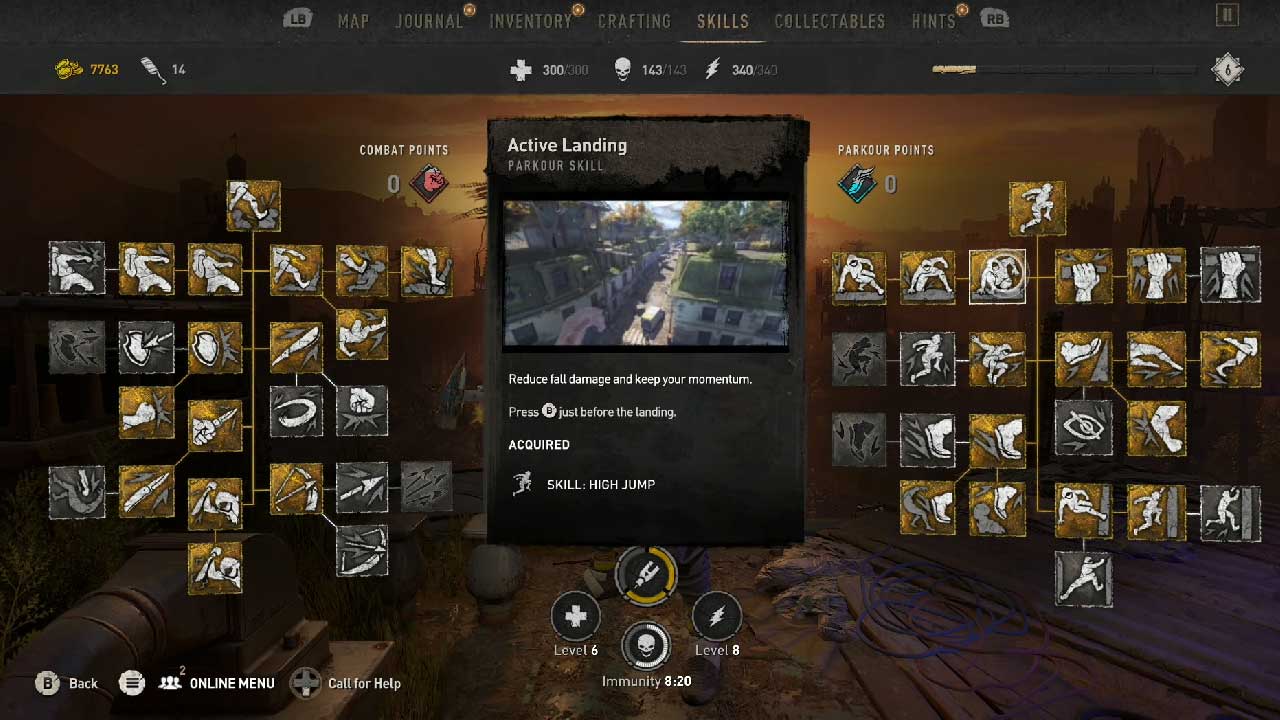 In a game like Dying Light 2, you’ll die a lot from mistimed jumps and underestimating how far that ledge from across the block is, thus falling to your doom from 10 stories high. Active Landing and the other fall damage mitigating like Safe Landing can help you survive some of these pratfalls. Just make sure to press the crouch button when you touch the ground.

Note that this isn’t going to save you from a botched jump atop a skyscraper. You will need to use the Paraglider to save your ass from these accidents.

Other Very Important Skills To Get

Smash, Smash Jump – An aerial assassination move. Sneak up and jump on them to do this, then chain stealth air kills with Smash Jump.

Block Projectiles – Useful against ranged enemies. Lets you block arrows and other projectiles.

Firm Grip – Until you get the Paraglider mid-game, this move can save your life. It lets you make the last climb on ledges even without stamina left.

Dart, Dash – Great for quick escapes. Allows you to use a bit of stamina to get a burst of speed. Dash lets you maintain your Dart speed at the cost of draining stamina. Useful especially for the mid and late game when you used up your inhibitors for stamina buffs.

Tic Tac, Wall Run – You need to unlock Tic Tac before you can get Wall Run, which is useful for running up walls to get far-to-reach ledges. 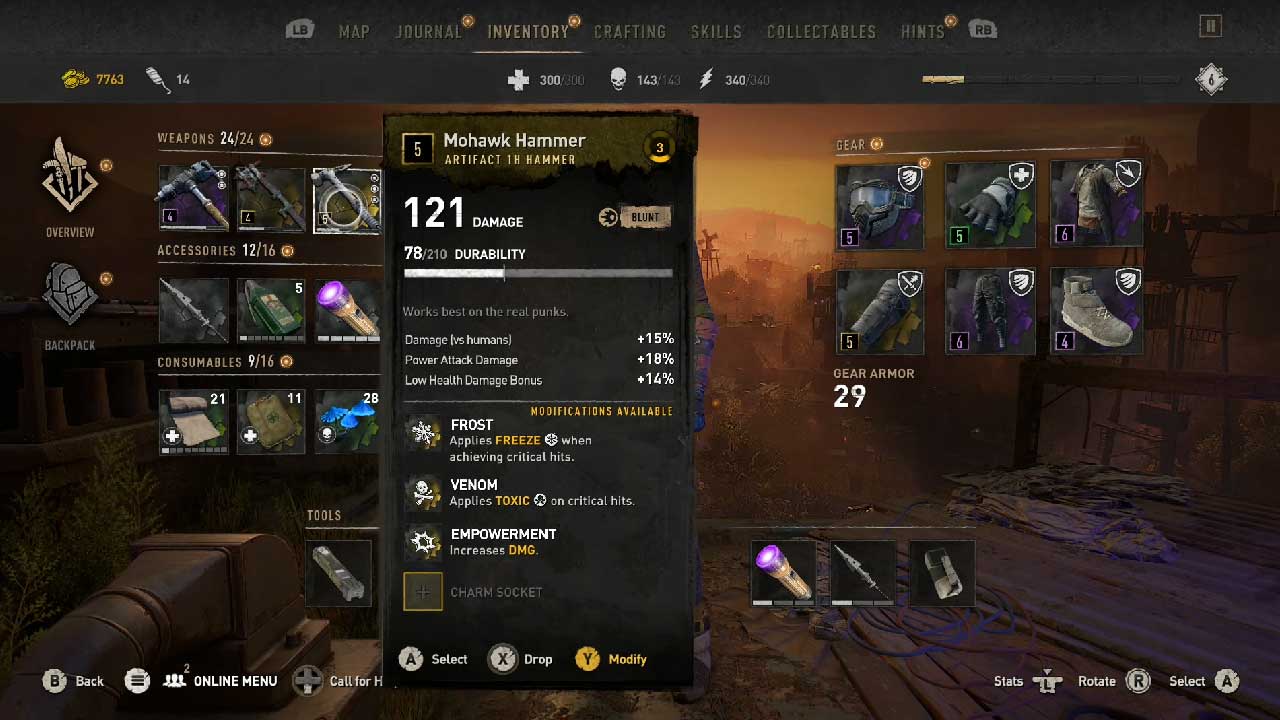 Throughout your Dying Light 2 journey, you can add a ton of mods onto your weapon like burn effects or even the ability to freeze AND poison enemies as long as you just hit them normally. You will need to buy crafting mod recipes from craftspeople, and of course scavenge and farm for the tools and components needed to make your equipment.

Yes, your weapon will eventually break but you’ll find green and purple-tiered weapons that last longer, so you might as well add some shaft and hilt buffs to make your weapons a tad more powerful. The better the colour, the more mod slots the weapon has. For instance, gold weapons (artifacts) can have up to 3 mod slots plus a charm slot for aesthetics purposes.

As for which mods are the best? Anything that can freeze or deal DPS effects are best: Frost, Venom, and Burn are good choices. Moreso if you can upgrade the crafting recipes for these mods. 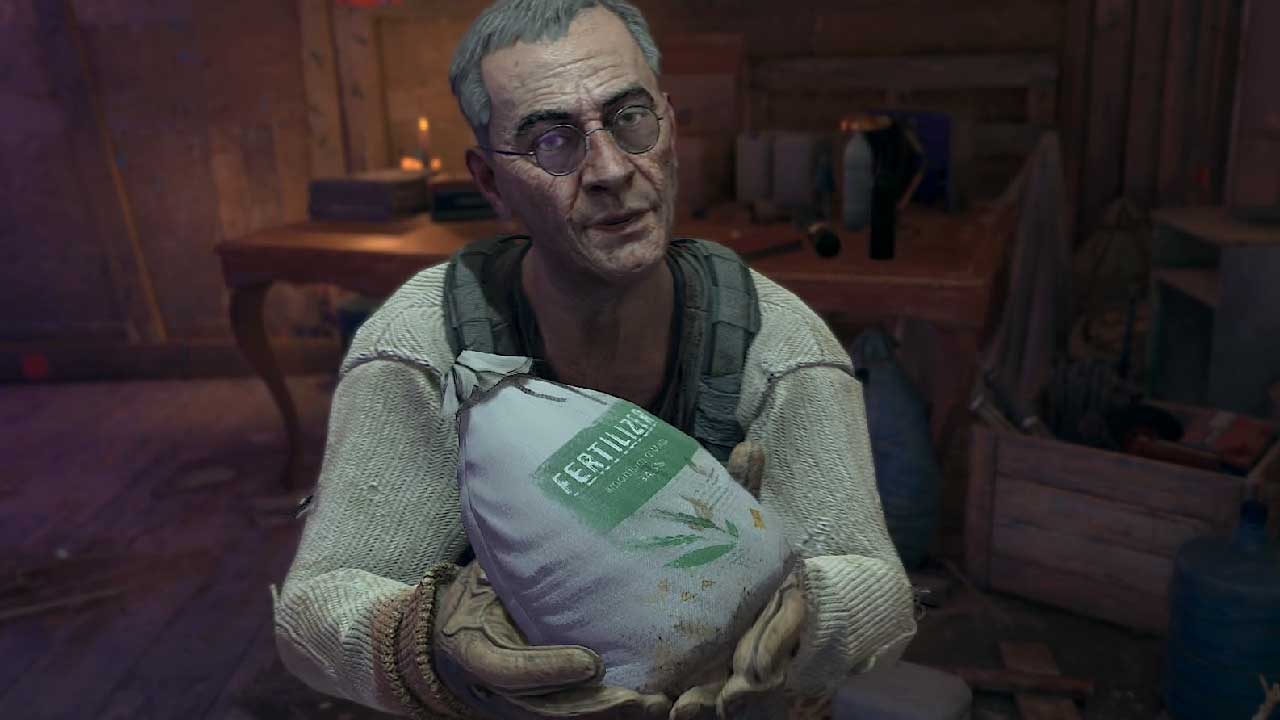 How does one farm for money in Dying Light 2? Easy: by scavenging and selling off loot you don’t need. There are plenty of opportunities to do that when you’re out on your own in Old Villedor or at the Central Loop.

Every time you defeat an enemy be it a Renegade or a zombie, do search its pockets(?). Chances are you will either come up empty or get some money out of it. In fact, you can even get scraps and even some items that you can sell off.

Heck, during the mid and end game, you’ll end up with more weapons than you should. Sell those off for more money. At this point in the game, you can check out Dark Zones which house crystals; these crystals can be sold off for cash too and are pretty valuable.

Power For Peacekeepers Or Survivors? 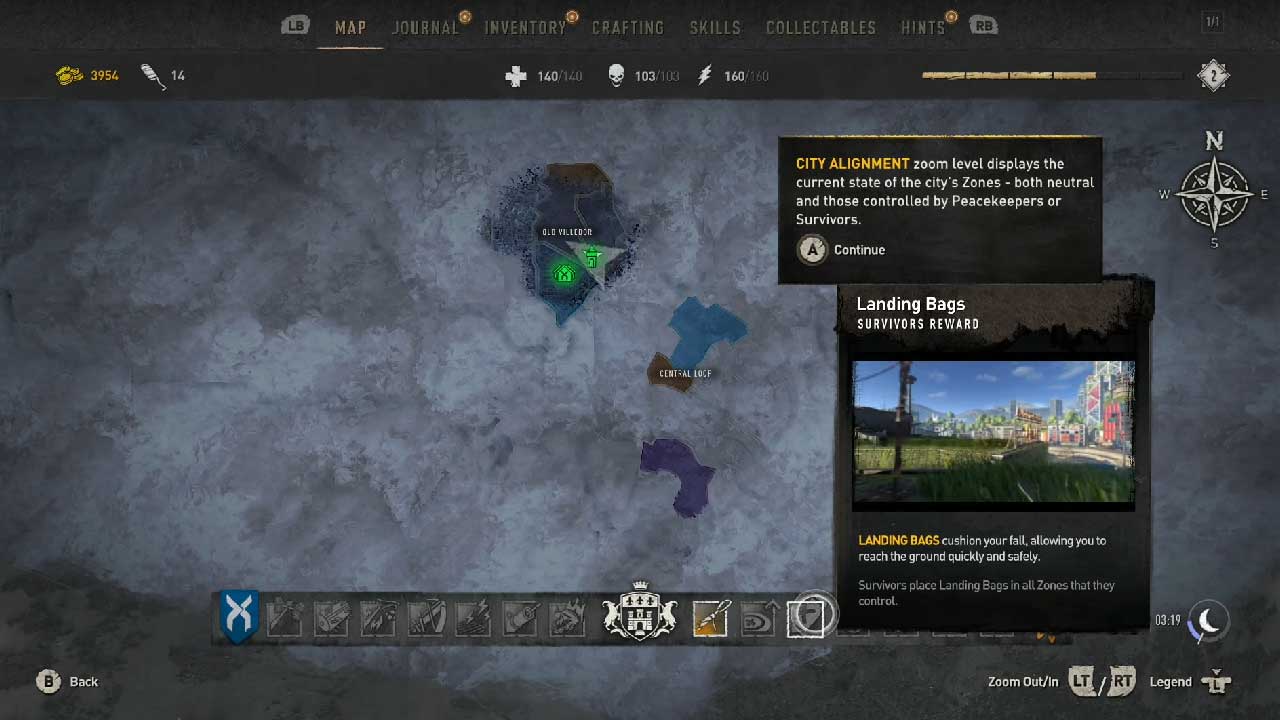 During Dying Light 2, you get a choice to either distribute power and water to either the Peacekeepers (the police of The City) or the Survivors (regular restless folks). Depending on your playstyle, the Peacekeepers will give you more combat-oriented powerups on the field while the Survivors will lay out more parkour-friendly buffs and tools on the map.

We went for the parkour-friendly route: the Survivors offer a bunch of map perks and tools that helped us exponentially like Landing Bags that cushion our fall, Two-Way Ziplines that let you zip upwards, and buffed-up Air Vents to boost your paraglide flying further.

Here are some walkthroughs for the later portions of the game. There are major spoilers below, so take caution.

This is the mission where you’ll get the Grappling Hook, a very useful tool to reach far-to-reach places inside buildings.

Gigabash is out now and is a treat for kaiju fans, tokusatsu aficionados, and fighting game/brawler connoisseurs. It's a heckuva treat if you like par...

Open-world zombie games were a thing of the past: see the Dead Rising series. But Techland is bringing it back with Dying Light 2, which adds parkour ...

Genshin Impact's 2.6 update is up right now and features a ton of new quests. Chief of them is the new Archon Quest which furthers the main plot of th...