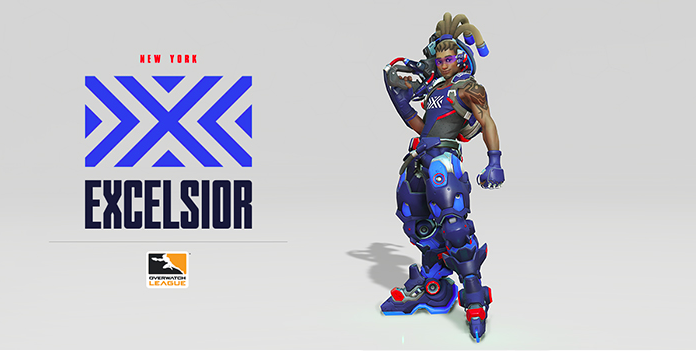 Team New York will henceforth be known as New York Excelsior after announcing their official name and logo yesterday. Mostly made up of players from Korean-based LW Blue, the team is owned byÂ Jeff Wilpon who is also COO of the baseball team The New York Mets.

The official statement read “The name Excelsior means â€œever upwardâ€ in Latin, and is inspired by the everyday heroism of New York. Â It’s this spirit of optimism, drive, and ambition that the team hopes will propel them to victory in the Overwatch League. The team nickname, â€œNYXL,â€ also evokes New York at its strongest, while the flag logo represents different people, cultures, and ideas coming together.

â€œIt is an amazing opportunity to have NYXL be part of a brand new professional league and representing the city of New York,â€ said Jeff Wilpon, Co-Founder and Partner at Sterling.VC, a Sterling Equities venture capital fund. â€œWeâ€™ve put together a strong team and look forward to competing at the highest level.â€ he added

Save for ‘Libero’ (Meta Athena) and ‘ArK’ (LW Red), the rest of the all-Korean roster were ex-LW Blue members and have competed together in the APEX circuit where they finished fifth in Season 4. You can get a glimpse of their players at the upcoming 2017 Overwatch World Cup as Saebyeolbe and Mano are part of the Korean team.

â€œIâ€™m incredibly excited to join NYXL as a coach with the chance to manage the team as it competes with and against the best players in the world in the Overwatch League,â€ said Pavane, coach for NYXL. â€œNew York is a great sports city and we will give our all when representing the city and our fans when play officially begins.â€

Also revealed was the team’s colors, modeled by Lucio. We aren’t so crazy about the colors tho but reckon it would look really good on a Genji. What do you think?

The Overwatch League begins preseason play on December 6, with a series of exhibition matches featuring all 12 teams. The regular season will begin on January 10 and run into June, with playoffs and finals in July 2018.

XEL Is A Gorgeous Sci-Fi Zelda Title Coming To 2022