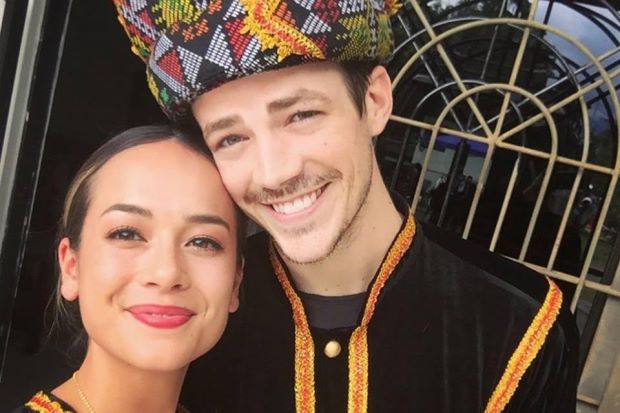 Barry Allen has found his real-life Iris West. Congratulations to Grant Gustin and La Thoma for officially tying the knot!

The Flash star Grant Gustin, 28, and half-Malaysian U.S. citizen Andrea La Thoma, 30, reportedly got married in a private ceremony at the Valentine DTLA in Los Angeles on Saturday, December 15, 2018.

Though the newly-married couple has yet to comment on their marriage on social media, Gustin’s rep confirmed the news to E! News earlier today, stating: “They were surrounded by their families and close friends, and it was a beautiful ceremony and an unforgettable day.”

Gustin’s manager took a picture with the newlyweds and shared it on Instagram, which you can take a look at below:

Contrary to what some might believe, while Gustin did propose to La Thoma in April 2017, they did not get married in Malaysia when they were briefly visiting La Thoma’s Kadazan family in Sabah in December 2017. According to Gustin, they only participated in “a beautiful, symbolic Kadazan ceremony to honor LA’s ancestors.” Thoma later added that they wore the traditional Kadazan outfits, and had “a shaman and a medicine-man do all of the blessings.”

Andrea La Thoma was born in Ohio, the United States, to American James Thoma and Malaysian, Sabahan and Kadazan Judy Thoma. She now works as a physical therapist, who is also quite the Instagram star with almost 500,000 followers. In an interview with The Star newspaper, she said that “her family returns to Sabah every few years so as not to lose touch with their Borneo heritage.”