Ubisoft’s loot-and-shoot action-adventure title The Division 2 is out to much fanfare. So far, it seems to rectify the faults of the first game and is giving players more bang for their buck.

Of course, if you just bought your copy this weekend and are overwhelmed, we’re here to help. We’ll start off with some basic tips, then dive deep into Dark Zones and how to go rogue in style.

Be Smart When Fighting

Enemies in The Division 2 are smart, so you need to be vigilant. If you see cover when in a firefight, use it. To get from cover to cover, just press and hold the space key (PC version) to the area you want to run to. If you want to get out of cover, press the space key twice to perform a dodge maneuver.

Enemies will also yell out commands when setting up a turret or when throwing a grenade at you and your team. If they do, act accordingly and fall back if you have to. There’s no shame in being a camper here if all your opponents do not miss most of their shots.

Your enemies in DC have weak points you can shoot to quickly kill them. Hyena chargers have bags containing chemicals on their hip; shoot it to blow it up in their faces to confuse and stun them.

The armoured enemies usually have a weak spot on their backs; have your teammates shoot them in the front while you run to their backs and fire away.

Dismantle Your Turrets & Drones After Combat

After a fight, don’t just leave your active turret and drone out there. Dismantle them by holding down their respective assigned ability buttons. You’ll get their cooldown times halved so they can be ready for the next fight a lot quicker than usual.

These side jobs scattered across Washington D.C will net you experience and extra loot so that you can tackle Main Missions without much hassle. This works well with a team; you can search for people to party up with in every Main Mission.

Control Points also house storage rooms; when you complete a control point mission, it unlocks. Which means you get access to possible high-tier or purple-coloured loot depending on how high your level is.

Do this when the option is available. Material limit is capped so you might as well find the best way to spend all of it instead of hoarding. When you first interact with the crafting table (before you select any pieces you want to craft), choose the “Upgrade Crafting Table” option.

Donating resources and completing projects are a surefire way to net more loot for your character. Just keep track of what you need for each Project you see in each town and community; they range from donating to captured spots to helping out people in distress while free-roaming. Plus, a little extra XP and loot while doing these do not hurt the experience.

You’re going to run out of space to keep all your weapons and horde your equipment. So why not deconstruct them to useable parts for crafting and donating instead?

Play With Friends….And Even With Randoms

We cannot stress this enough. You need to start playing in a group if you want to get through this game.

Enemies in The Division 2 can be smart, can surprisingly absorb more than two headshots, and will not show mercy when outgunning and outflanking you. Sure, you can use your player-assisting gadgets like the healing drone or turret, but higher-level enemies will shoot those down on-sight with godlike precision.

You’ll need to have an actual person, friend or stranger, to get your back during free-roaming and Main Mission modes. 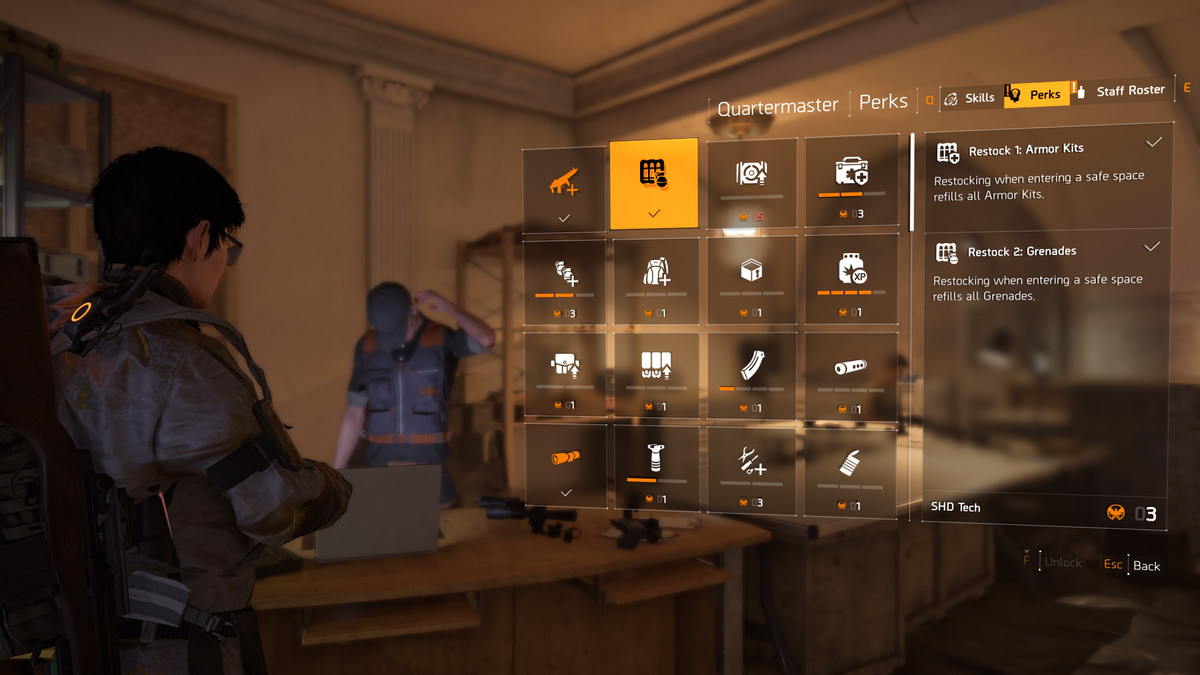 Here’s what you should get when you score your first few SHD Tech points and Skill points.

Detection: After supplying a friendly control point with donations, all lootable containers will be marked in the world. Yes, you can even spot them through walls. Very useful if you want to farm for crafting materials, water, and food.

Extra Inventory/Resource Storage Space: You’ll be hoarding weapons and items throughout your journey to level 30. You might as well open up space to keep as much as possible.

Accolades: These perks reward you with additional XP if you shoot enemies in weak spots or go for the headshots.

Turret: Get this if you plan to play solo at the start. Having an extra “automated buddy” firing at enemies is useful.

Shield: Lets you survive longer. Find a shield that combos with an SMG and assault rifle.

Want To See Everything? Here’s The Division 2 Perks List

Iâ€™m sure you wonâ€™t want to waste time sifting through Netflixâ€™s extensive catalogue of shows and movies just to decide on what to...

Indie developers have it hard compared to the gigantic studios, casting a shadow over these small creators. It's like comparing a tugboat to a superya...

This guide is still under development as the quests will slowly unlock as days go by. Genshin Impact is hosting a rather odd event for your heroes ...