MAGFest 2020 Is Truly The Ultimate Gaming Event; Here’s Why

Gaming expos and conventions these days are usually esports-centric and driven. Some of them feature the latest upcoming games and a bunch of queues that entail said play session. All I’m saying is that the more things change, the more they remain the same.

If you’ve been to more than one of these, you’ll probably know what to expect. That isn’t a bad thing, mind you, but if you want something beyond the norm and expectations, those events are pretty hard to find within the region.

MAGFest takes a different approach. Taking place at the Gaylord National Resort & Convention Centre, Maryland, this non-profit community event packs in more depth than most of them. I had to take a flight down to the U.S. just to see and experience it for myself. It’s been too long since I took a non-Southeast Asian holiday, anyway.

Suffice to say, it pretty much is. And then some. This truly is the Arcadia of video game events.

In fact, the only bad thing I can say about MAGFest 2020 is that it’s overflowing with activities, which when you think about it is high praise. True, it had since 2003 to improve and go big, but MAGFest is something you have to experience for yourself and subsequently get overloaded with until you realize you only have four days to work with.

Yeah, this was supposed to be a holiday treat for me. But I can’t pass up a chance to write about what could be the apex of video game conventions and expos. I mean, it’s not like anyone else is going to write about it at this point in time, so what the hell…

What the heck is a MAGFest?

Short for “Music And Gaming Festival,” MAGFest is a four day-long event dedicated to the appreciation of video game music, gaming of all types, and the gaming community. The event runs 24 hours a day, and offers consoles, arcades, tabletop, LAN, live video game cover bands, chiptunes, vendors, guest speakers, and much much more.

Here’s my description: it’s a glorious 4-day video game Nirvana, or Hajj in this context. There’s a great blend of Western and Eastern gaming activities spanning in the giant-as-heck convention centre. And it goes on all night long.

Why is this event a big deal?

Because it is unlike any other gaming expo I’ve seen. I’ve been to a lot of Asian video game conventions and expos. I’ve been to E3s and Tokyo Game Shows. While a majority of them are great, MAGFest is a completely different beast that resides in its own high tier of awesomeness.

I’ll break it down.

The Many, MANY Music Acts 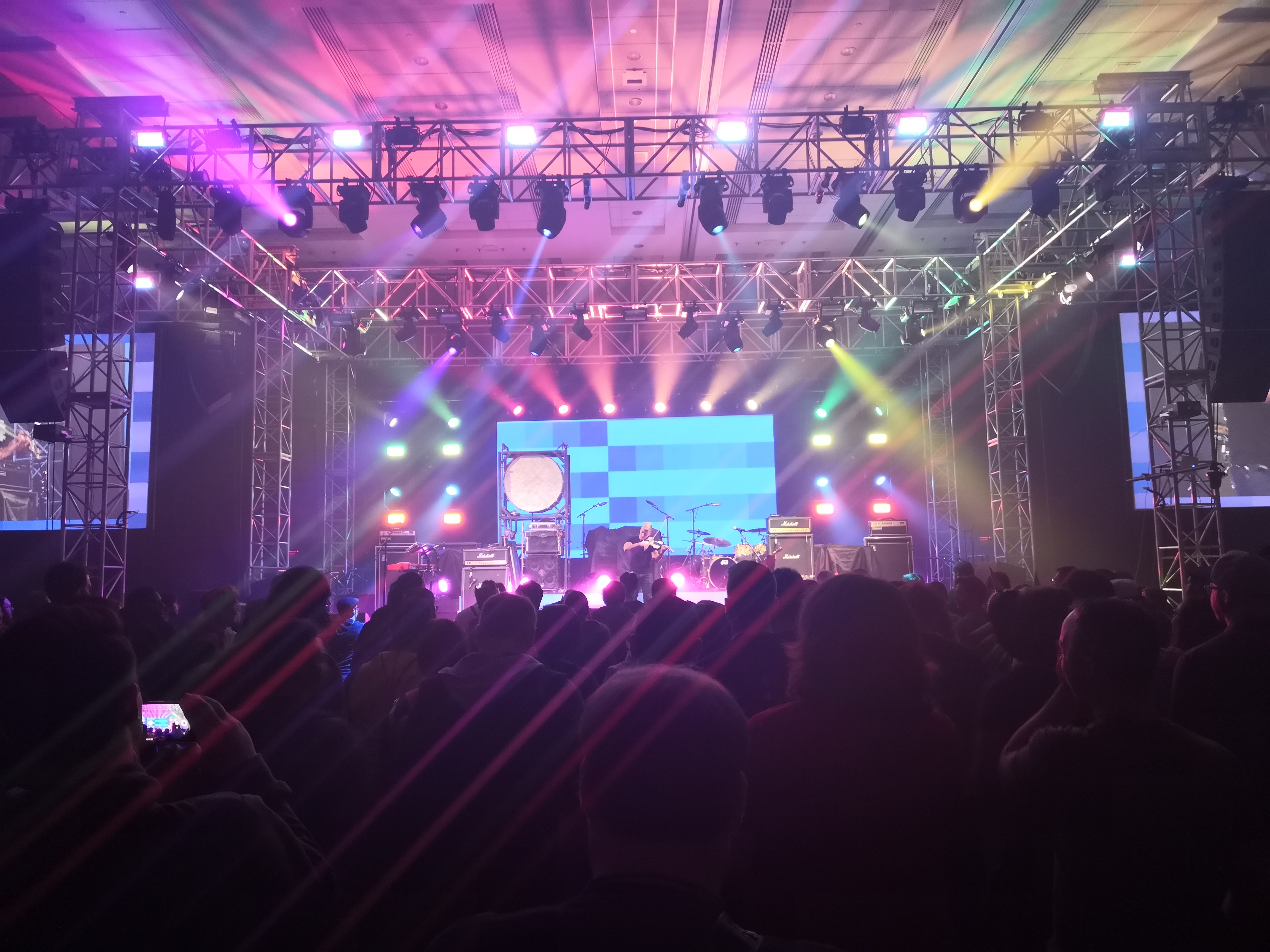 The “M” in MAGFest stands for “music”, and there’s a lot of that performed live and in a very spacious and acoustic-savvy ballroom. Even if you don’t know half of these new bands and cover artists -I certainly didn’t – you’re bound to find a group or five you can gel with.

From rock to EDM to chiptune, there’s no shortage of genres; just space for the more-requested acts like insaneintherain, Protomen, and legendary video game music composer David Wise and his ensemble. Heck, there’s even a violin chiptune performer, a mariachi ensemble, and a few rappers who freestyle about Puzzle Bobble clones on their phones. 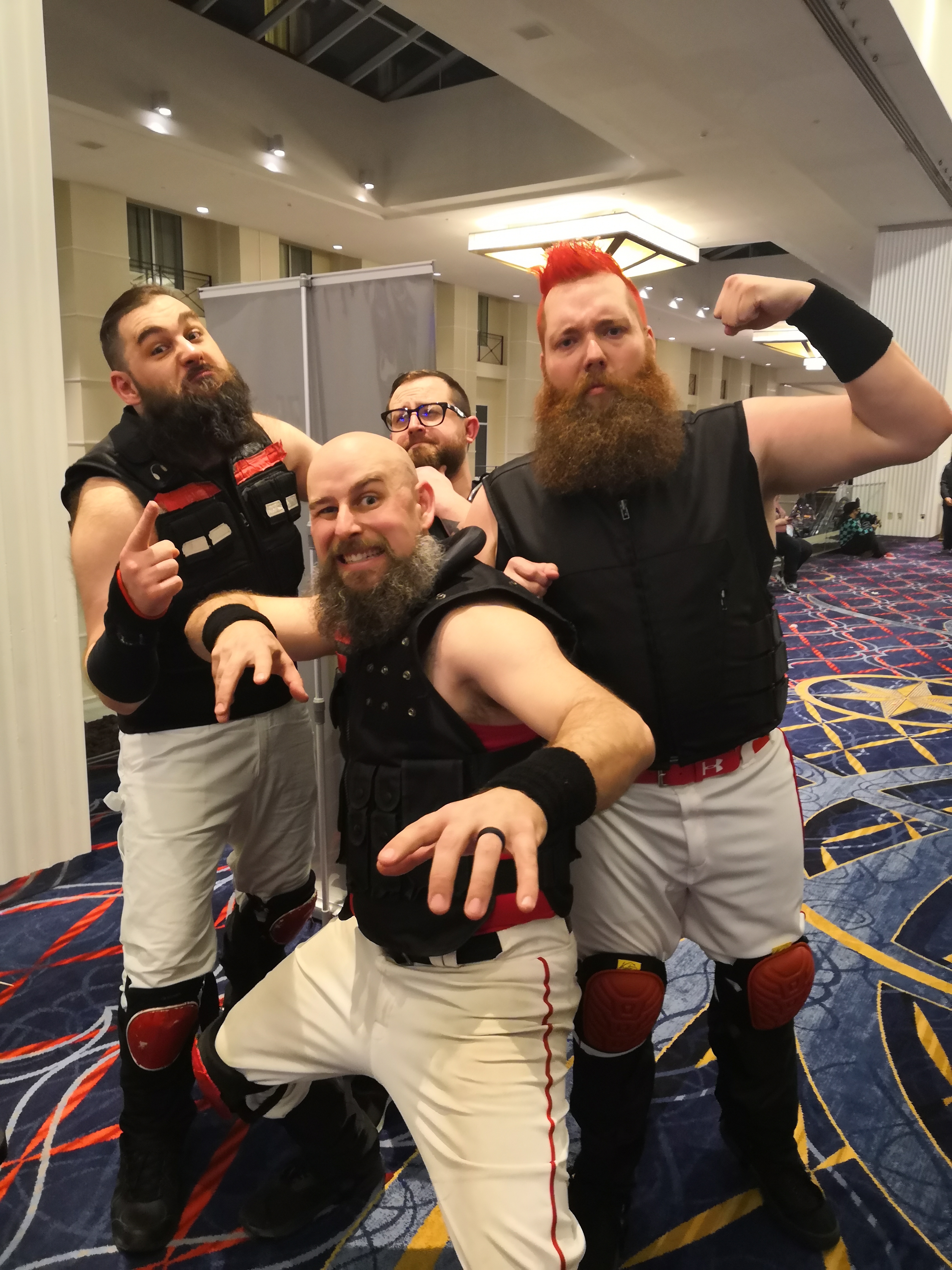 One of the many reasons to tune into MAGFest: Urizen the band.

Best of all, you can rewatch these awesome moments on MAGFest’s YouTube channel where they archive all of their music acts and highlights.

Plethora Of Stages & Clinics For The Musically-Inclined

The main hall isn’t the only place to listen and jam to video game arrangements and covers. There is the Chiptune stage where amateurs can plug in their setup and just jam for an hour. There’s also a small stage next to the MAGFast arena where rock bands perform covers of Sonic The Hedgehog 2’s Chemical Plant Zone.

The hotel’s Belvedere Lobby Bar also plays host to a ton of other major acts. As you can tell below, the bar filled up pretty quickly. But just to be within the front and listening to folks like Super Guitar Bros. playing Chrono Trigger themes and Woodwind Wakers pulling off the Octopath Traveler main theme; that’s an experience you need to be there for that you can’t find anywhere else. 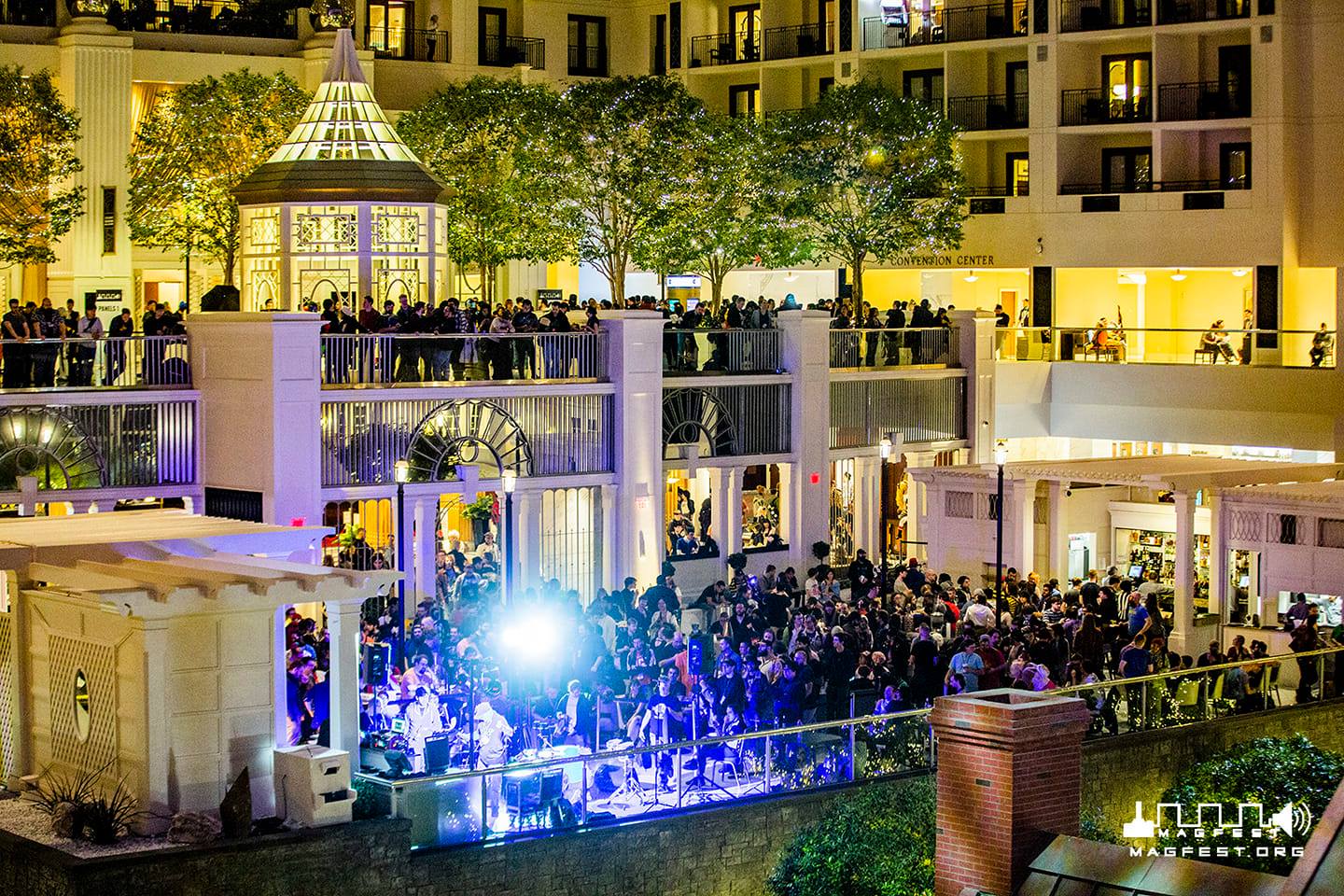 There are even rooms dedicated to budding composers and musicians to do jam sessions with random video game music sheets. That’s pretty progressive since it will help make better musicians out of future bands.

When the organizers say “much, much more” on their website, they were not kidding. Merch booths featuring brands like Angry Video Game Nerd, limited edition goods & props, and a host of doujin artworks? Check. A lovely waterfall and faux rainforest backdrop for cosplay photoshoots? Check.

D&D and tabletop sessions for you analog gaming nerds complete with kickass setups? Check. With the majority of the aforementioned events running 24/7 from Thursday to Sunday early evening? Hell “check” yeah.

But what about safety hazards? The MAGFest folks got it covered with some simple and logical rules. These special areas & rooms have some simple guidelines: no booze, food, or drinks allowed so that accidents are kept to a minimum. There are also repair clinics for machines in case some of them do not work.

Even during the performances, I had the staff telling me not to leave my bag on the floor numerous times on different occasions because it could be a trip hazard. That’s vigilance & dedication right there.

Of course, MAGFest can also be a bit relaxed when needed. You can have a drink outside of the hallways and in the hotel lobby. There are roundtables and chairs along the hallways and empty spaces so you can chill out, play a quick tabletop game, or have a quick Mario Party session with a bunch of Nintendo Switches (complete with a power strip around the area.

And if you choose to, you can set up your own turntable and EDM-churning kit to get a dance party starting. Throughout the four days, there was a huge influx of cosplayers, furries, and video game geeks dancing non-stop to a combination of Haddaway, Corona, SiIvaGunner remixes, and “Megalovania” covers with high BPMs.

It was actually tougher to find a quiet spot within the MAGFest hallways. Every nook and cranny is brimming with geek stuff aplenty.

If you don’t want to buy hotel-priced food from the convention centre, you can always head out for cheaper & more substantial food within the vicinity (more on that later).Â Everything here is all done and set up in a very efficient and tidy manner.

There were a few odd cases like long elevator waiting times when going up and down, and some clown smearing peanut butter onto hotel door handles as a harmless prank. But all in all, it’s a controlled environment built for video gaming and partying fun.

It’s no surprise that expos and events usually hire volunteers for little to no pay to help out and police the premises. The MAGFest team has been doing this in full force since they locked down the Gaylord hotel and convention spot, and it shows.

Every staff tirelessly help out within the 4 days to make the event an awesome and safe experience. All the machines and gear for the 24/7 arcade, retro, and console sections are all loaned out for the 4-day event.

Everyone from different hobbyists who own a ton of Japanese arcade boards and machines to role-playing groups are setting up their own freeplay areas and sections to get everyone invested and enjoying their respective hobbies.

It’s a Bring-Your-Own-Machine kind of event, and everyone is doing this by the motherload. The crazy part? Aside from administration costs, no one is getting paid to help out. Every enforcer and staff you see here in MAGFest is helping out of their own free will.

The most surprising discovery during my time in MAGFest is that I’m in a pretty packed and big-sized video game party event that has no sponsorship or obnoxious corporate ads whatsoever.

This is a first for me in eons; I am dead serious. No Boost, no Razer, no PlayStation, no Garena, no Yoodoo. Nothing.

I’m not knocking on expos having sponsorship -there are humongous bills to pay and branding exercises to be done for the long term. But it is refreshing to see a major game event that is completely not reliant on it. The closest an organization has done to get close to this is Penny Arcade, and even then it comes with its own sponsorship baggage ever since it split it up to three brands (PAX West, East, and AU).

It’s also refreshing not to hear the word “esports” thrown around frantically and forcefully in a video game expo for the first time since forever. It’s been too long since we had an event hosted by gamers, for gamers. Real ones.

MAGFest is as real as it gets to celebrating video game culture without corporate and company meddling. This proves that such an untainted gaming event exists; just not in our corner of the world.

Sounds like a blast; I want in. How do I do this?

Well, you need a couple of things.

Just to put things in perspective, a week’s stay will definitely put a huge dent to your wallet; about RM8,000 worth. And that’s not counting the MANY merch you’ll be buying on this trip. 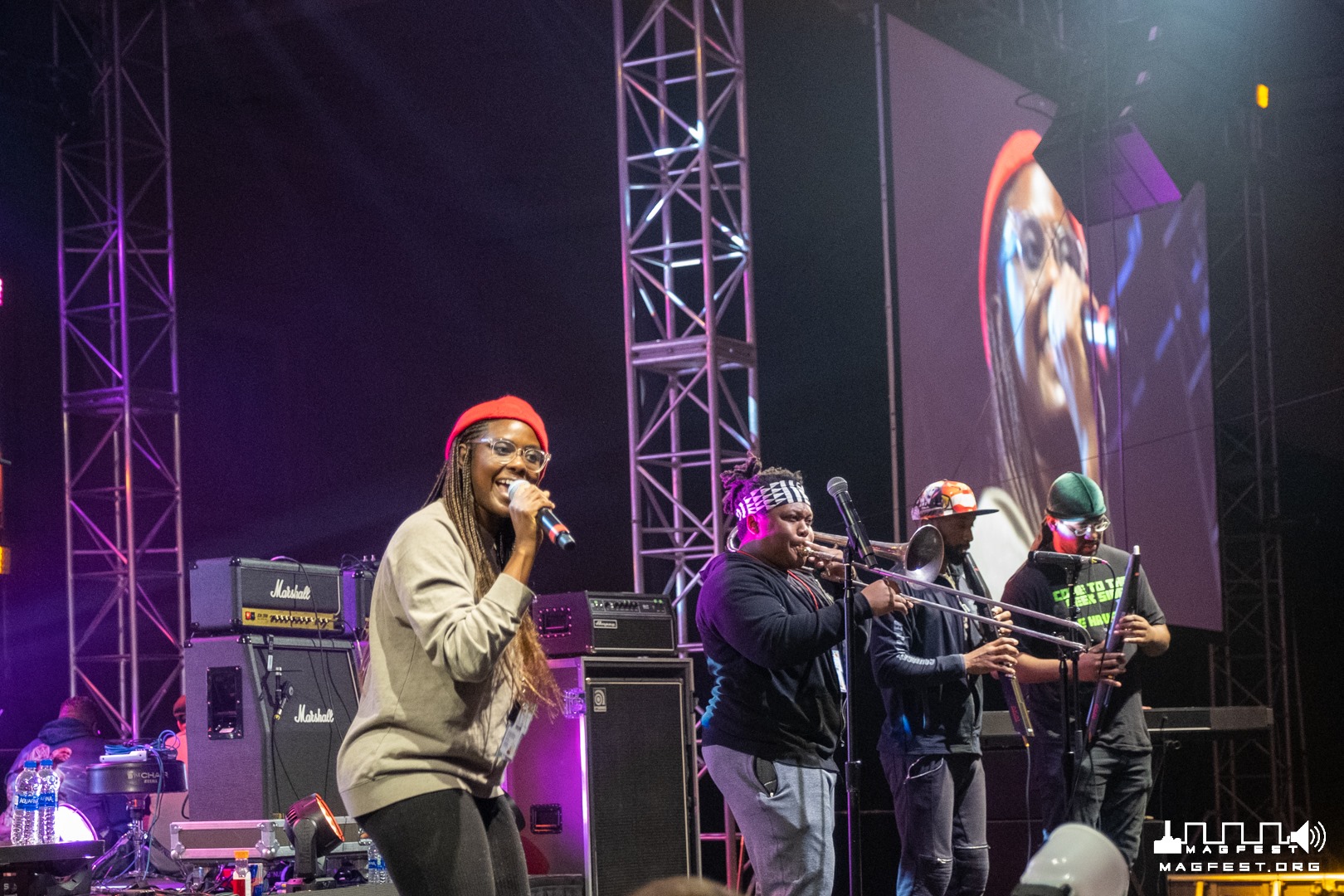 Yikes, that’s very expensive. But is it worth it?

Yes. It’s a lot of money for just a four-day event, but it’s a glorious and magnificent four-day video game music-slash-24-7-gaming event that you need to experience just once or twice in your life. Trust me on this.

NEXT: Protips, & can MAGFest work outside of the USA?

Feature
Gamescom 2022: All The Announcements & News

Update (25/8/2022): Added games from Wednesday. Gamescom 2022 is live this week, and there are a ton of new video game announcements and surprises ...

Feature
What's It Like Being An Anime Maid In Malaysia?

On this special Kakuchopurei full interview, we go online with marketeer & musician Eunice Yin and find out what's it like playing a maid in a caf...

The week of October 6 is when Malaysia and Southeast Asia's finest game developers and game makers gather in Kuala Lumpur for the annual Level Up KL v...