This 10th November, Borderlands 3 will come with a massive Season 2 update starting with the Designer’s Cut. One major feature from this update is the addition of a fourth purple skill tree for each Vault Hunter.

Here’s a breakdown of Amara and Fl4k’s new skill tree (via the official site & GameSpot). Moze and Zane’s new skills will be added later on 23rd October. 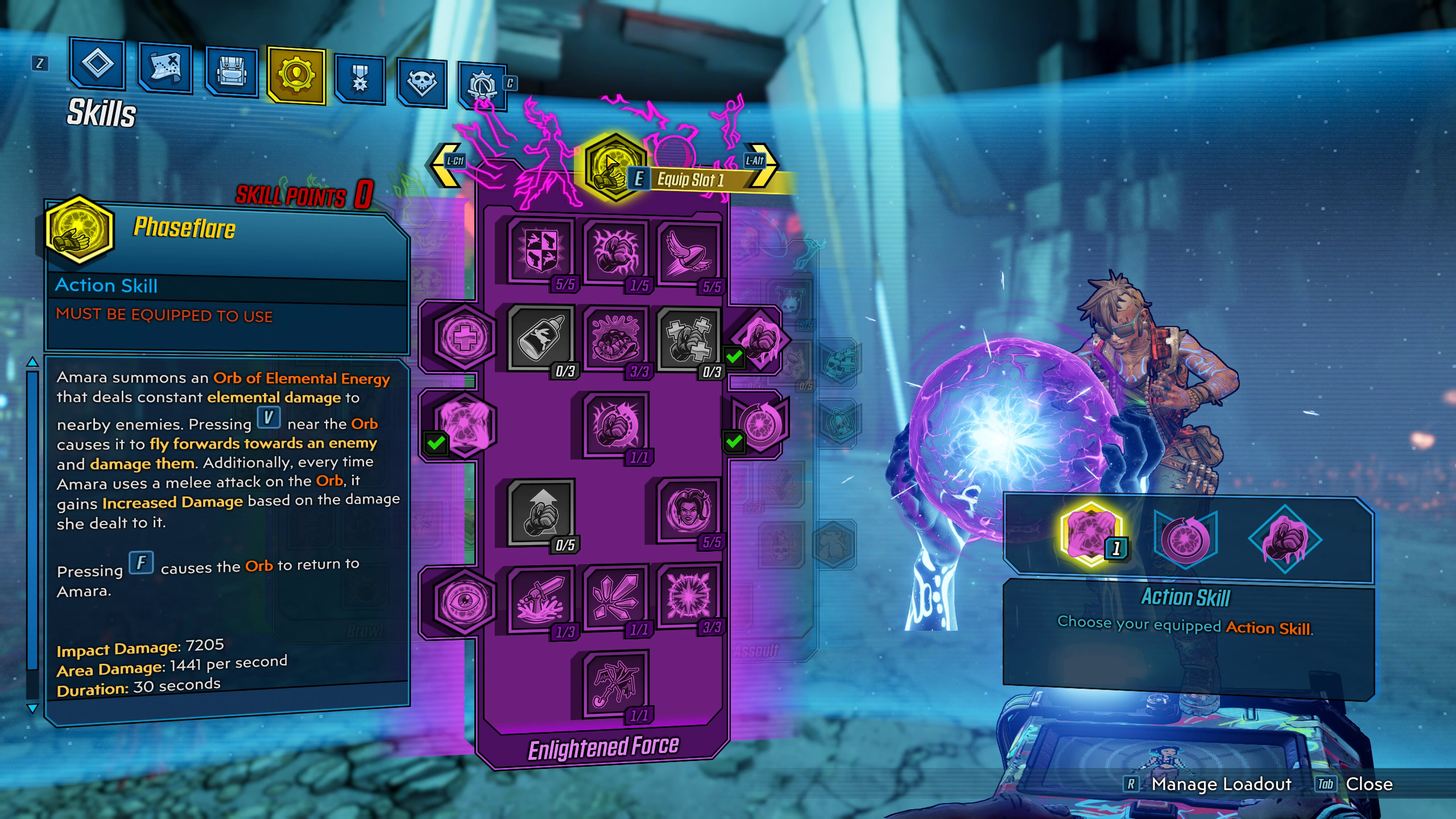 Trust in Yourself: Whenever an enemy breaks Amara’s shield, she gains increased Reload Speed, Charge Speed, and Weapon Swap Speed for a short time. This effect is doubled if Amara’s shield is broken by a melee attack.

No Mistakes In Nature: Whenever Amara inflicts a Status Effect on an enemy, she gains increased Melee Damage for a short time.

Ebb and Flow: Whenever Amara kills an enemy with a melee attack, she gains a portion of the damage dealt back as health (life steal).

Unweave the Rainbow: Amara deals Bonus Damage of her attuned element whenever she deals Melee Damage or Splash Damage to frozen enemies.

Go with the Flow: Whenever Amara Freezes an enemy, she gains increased Movement Speed and Weapon Damage for a short time.

Glow Up (Action Skill): Instead of dealing Splash Damage to enemies, Amara’s Orb grants nearby allies Health Regeneration. Amara may also press V while near the Orb to send it to a downed ally, granting them Second Wind.

Joyful Freedom: After activating her Action Skill, Amara gains increased Melee Damage for a short while.

Shooting Star (Action Skill): Amara summons an Orb of Elemental Energy that deals constant elemental damage to nearby enemies. Pressing V near the Orb causes it to fly forward towards an enemy and damage them. This increases the amount of OVerall Damage the Orb deals to enemies. Additionally, the Elemental Orb continually fires Elemental Projectiles at the last enemy Amara damaged. Pressing F causes the Orb to return to Amara.

Free the Soul (1): Kill Skill. Whenever Amara kills a frozen enemy, splinters fly out from that enemy and home to nearby enemies, dealing Cryo Damage. This skill has a short cooldown.

Clear The Mind (1, Capstone): Kill Skill. After killing an enemy, Amara ignores enemies Elemental Damage resistance for a short time. This does not affect Elemental Immunity.

Also, Amara can use Cryo elemental damage with this new skill tree, meaning she gets to buff herself up while slowing down enemies. Her purple skill tree also has some tank-like buffs that can make her draw aggro, like Salvador did in Borderlands 2. 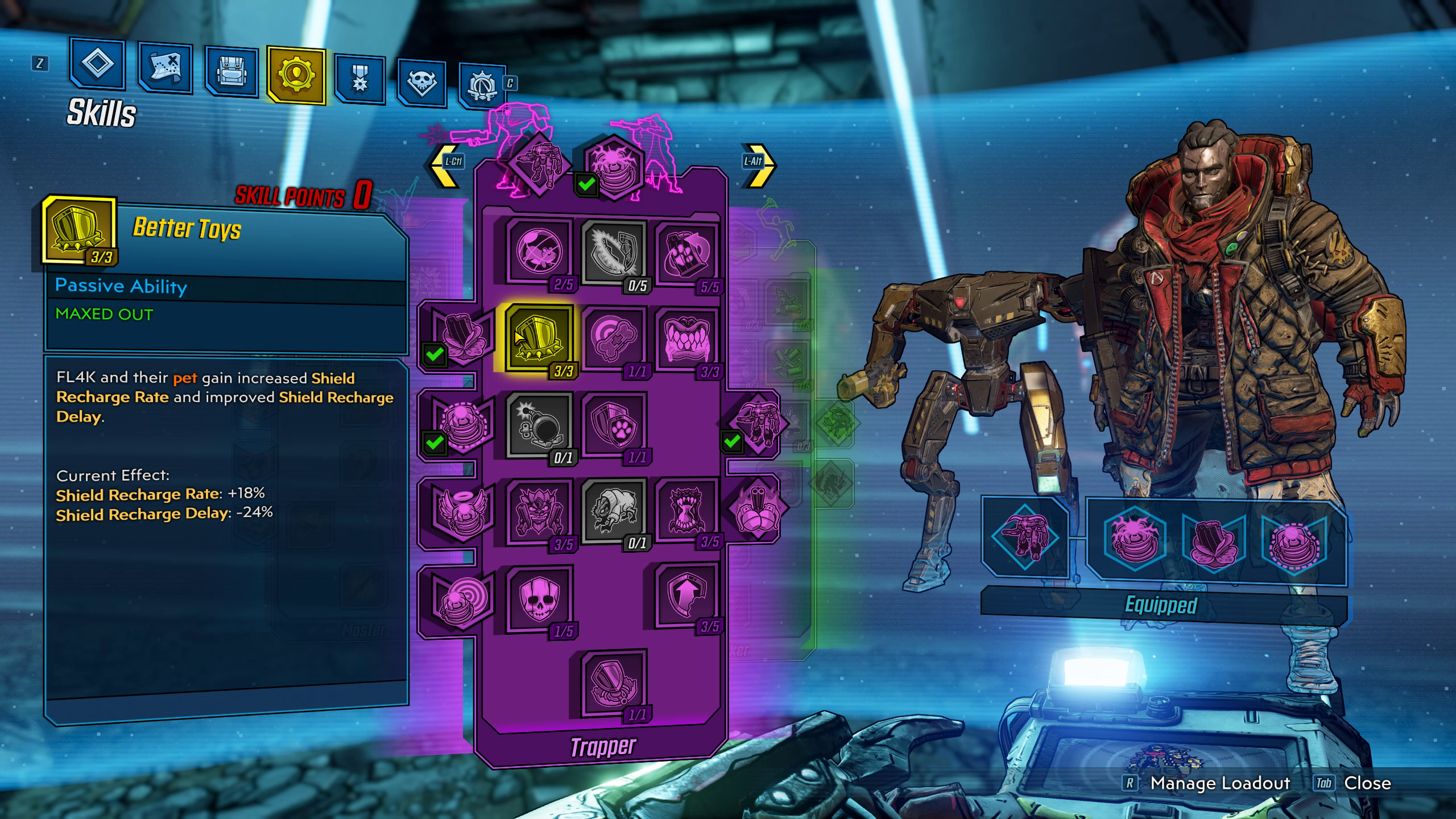 New Action Skill: Gravity Snare – Fl4k tosses out a trap that knocks up and temporarily stuns nearby enemies.

Success Imminent: Whenever Fl4k’s or their pet’s shield breaks or is filled, they and their pet create a Radiation Nova. This skill has a short cooldown.

Forage (Action Skill Augment): Whenever an enemy trapped by Fl4k is knocked into the air, they drop ammo, health boosters, and shield boosters.

Combat Veterinarian: Whenever Fl4k shoots the same enemy their pet is attacking, Fl4k’s pet gains a portion of the damage dealt back as health.

Lethal Force Authorized (1): Whenever Fl4k’s Loader Bot pet would go into Fight For Your Life, it turns into an EXP Loader instead and seeks out a nearby enemy before self-destructing, dealing damage to all nearby enemies. Fl4k’s pet’s respawn time is reduced.

BUL Loader: Fl4k’s Ion Loader upgrades into a BUL Loader, discarding its sniper rifle for a shotgun. Fl4k’s BUL Loader also gains increased Damage Resistance and a powerful Roundhouse Melee Attack. While accompanied, Fl4k’s Shield Capacity is increased. When Fl4k issues an Attack Command, the Loader briefly turns into a Bulldoze to charge at enemies and knock them up.

Trap Card (Action Skill Augment): If Fl4k would go into Fight For Your Life while their Trap is readied, they automatically throw a Trap at the enemy that downed them.

Not Even A Challenge: Whenever Fl4k’s pet kills an enemy, Fl4k gains increased Action Skill Duration and Action Skill Cooldown Rate for a short time. This effect stacks.

WAR Loader: Fl4k’s Ion Loader is now a WAR Loader, discarding its sniper rifle for an Incendiary Shotgun and Grenades. While accompanied, Fl4k gets increased Fire Rate. Attack Command: WAR Loader unleashes a barrage of missiles at the target.

Blind with Anger (Action Skill Augment): Fl4k’s Trap no longer Knocks Up or Stuns enemies. Instead, the Trap confuses nearby enemies, causing them to attack their allies for a short time. Once deployed, the Trap continues to periodically confuse enemies for the duration.

Fuzzy Math: Whenever Fl4k or their pet scores a Critical Hit, a portion of Fl4k and their pet’s shields are restored.

Capacitance (1): Whenever Fl4k activates their Action Skill, they gain greatly increased Shield Capacity for a short time and immediately begin recharging their shields. This skill has a short cooldown.

This new skill tree solves Fl4k’s survivability. He’s known to be a squishy Vault Hunter when compared with the other three, so skills like Wooly Armor, Better Toys, Fuzzy Math, and Take This! can help keep the bounty hunter alive. The Gravity Snare action skill also helps immobilize enemies, setting them up for better critical shots or other shenanigans. 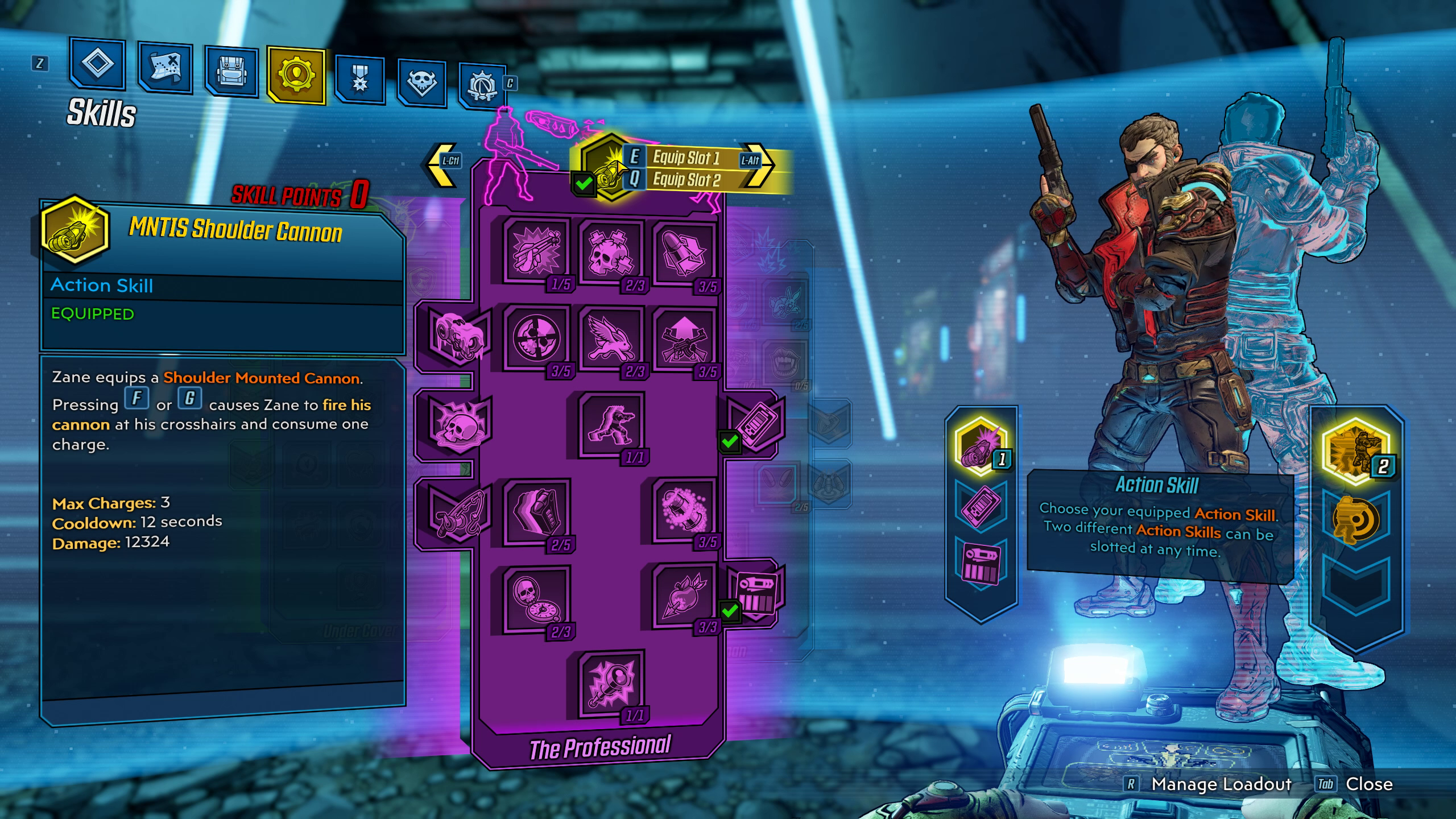 Man of Focus: Activating an Action Skill grants Zane increased Accuracy and Handling for a short time. This effect stacks.

Renegade: After scoring a Critical Hit, Zane regenerates health for a short time.

Deja Vu: Whenever Zane kills an enemy with a Critical Hit, there is a chance for 1 ammo to be added to his magazine. Starts at 9%.

Tunnel Vision: While moving, Zane gains increased Accuracy and Handling. The quicker he moves, the greater the bonus.

Wetwork (Action Skill Augment): Whenever Zane kills an enemy with his Shoulder Cannon, that enemy explodes into an Elemental Puddle.

Fugitive (1): Zane can sprint and shoot at the same time.

Brain Drain (Action Skill Augment): Whenever Zane kills an enemy with a Critical Hit from his Shoulder Cannon, two charges are instantly returned.

No Way Out (Action Skill Augment): Whenever ane damages an enemy with his Shoulder Cannon, that enemy is pulled to him and takes Increased Damage for a short time. Additionally, Zane’s MNTIS Shoulder Cannon cooldown time is increased.

The Art of War: After activating an Action Skill or Action Skill Ability, Zane’s next shot fired from his weapon deals Increased Damage. This effect stacks.

Our Man Flynt (Capstone, 1): While aiming down sights, Zane’s weapons deal Bonus Damage and automatically apply their Status Effect when he scores a Critical Hit.

Seems like this purple tree is meant to make Zane’s Seein’ Dead possibly redundant, making room for better and future class mods. It also gives Zane players more of an edge with Sniper Rifles thanks to Eraser.

As for the MNTIS cannon itself, you need to be very precise with your shots since there isn’t any homing capabilities or splash damage. On the plus side, Zane players can now exploit Action Skill End anointments since all of his past Action Skills only benefitted from Action Skill activation anointments. 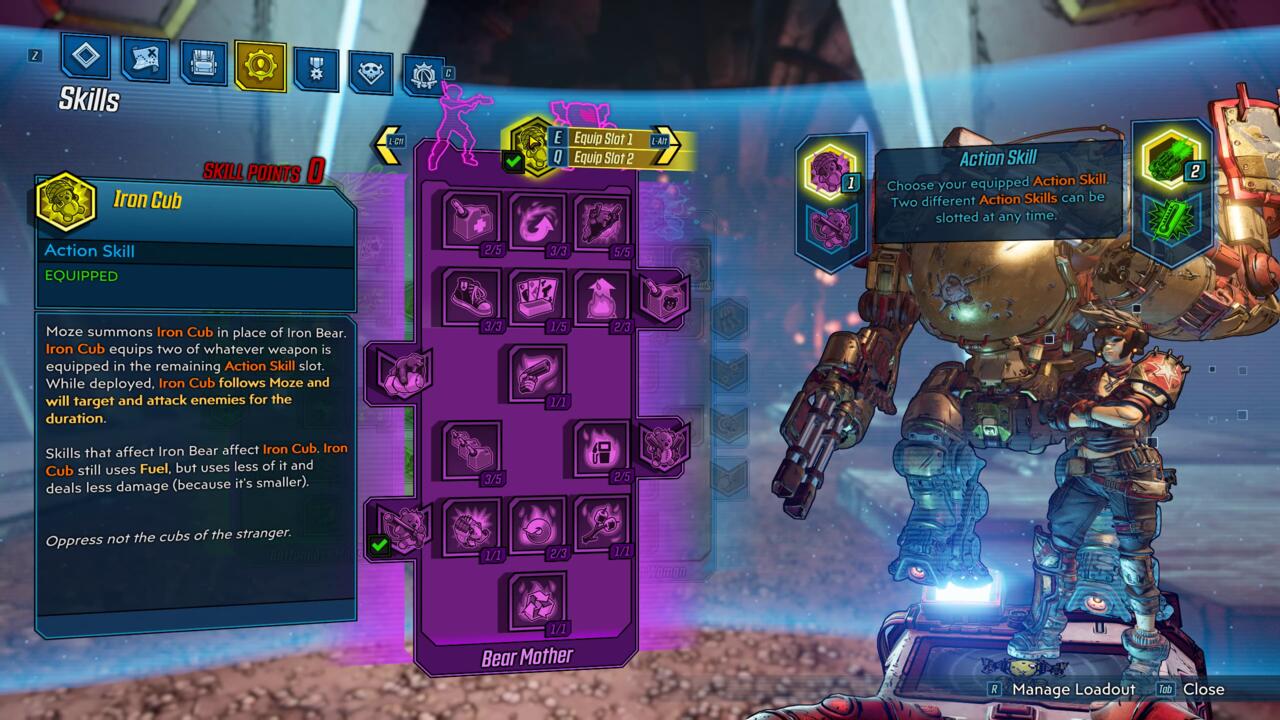 Biofuel: Whenever Moze or Iron Bear ignites an enemy, they both regenerate health for a short time.

Harmonious Havoc: Moze gains increased Gun Damage for each weapon, shield, and grenade that matches the element of her gun.

Fuel for the Fire (Action Skill Augment): Whenever Moze or Iron Cub inflicts a Status Effect on an enemy, Iron Cub’s armor is restored.

Fired Up (1): Whenever Moze or Iron Bear applies a Status Effect to an enemy, she gains increased Fire Rate for a short time. This effect stacks.

Never GOing TO Give You Up: Whenever Moze or Iron Bear applies a Status Effect to an enemy, Iron BEar gains Fuel. This skill has diminishing returns.

Superior Firepower (1): Whenever Moze or Iron BEar inflicts a Status Effect on an enemy, they gain increased Status Effect Damage.

Running on Fumes (Capstone, 1): Whenever Moze or Iron Bear ignites an enemy, Iron Bear does not consume fuel for a short time.

If you wished Iron Bear acted more like a long-term turret but without the Rocketeer class mod, this Skill Tree is for you. It basically turns Iron Bear into a smaller pet ala Fl4k’s. Heck, this Skill Tree takes advantage of certain Moze-appropriate guns like the Flipper SMG because of the bonuses it dishes out when you inflict Status Effects.

For more 2020 best games content, head here. #14: Granblue Fantasy Versus (PS4, PC) It's slim pickings for fighting games this year, unless you ...

Feature
So Let's Talk About The Ending To The Predator (2018)

We're very sure a number of you Predator fans and sci-fi buffs either (a) loved the 80s tribute you witnessed on-screen or (b) hated the hell out of i...

Feature,News
All The Games From Future Games Show Spring 2021: The Lord Of The Rings Gollum & More

The Future Games Show Spring Showcase 2021 live presentation took place earlier today and there were A LOT of games. Check out all the reveals, announ...