Star Wars The Batch Batch is the latest animated series in the long-running sci-fi franchise and itâ€™s currently ongoing with 13 episodes so far available to stream on Disney+ Hotstar Malaysia.

Star Wars The Bad Batch follows the elite and experimental clones of the Bad Batch as they find their way in a rapidly changing galaxy in the immediate aftermath of the Clone Wars. Members of Bad Batch; a unique squad of clones who vary genetically from their brothers in the Clone Army; each possess a singular exceptional skill that makes them extraordinarily effective soldiers and a formidable crew.

We managed to participate in a brief exclusive interview with actress Gwendoline Yeo, who voices the Kaminoan named Nala Se in Star Wars The Bad Batch, courtesy of Disney+ Hotstar Malaysia.

Yeo is best known for voicing other characters in other animated shows and video games, including Paine in Square Enix’s Final Fantasy X-2 and Lady Hana in Ghost Of Tsushima. Most recently, she’s currently starring as Zhilan in the CW’s Kung Fu TV series reboot.

To those unfamiliar with the character in the context of the Star Wars universe, Nala Se is the Chief Medical Scientist on her home planet of Kamino. She is most notable for having played a key role in engineering the Clone Troopers in The Clone Wars. In Star Wars The Bad Batch, she has a special connection to the unique clone currently known only as Omega. 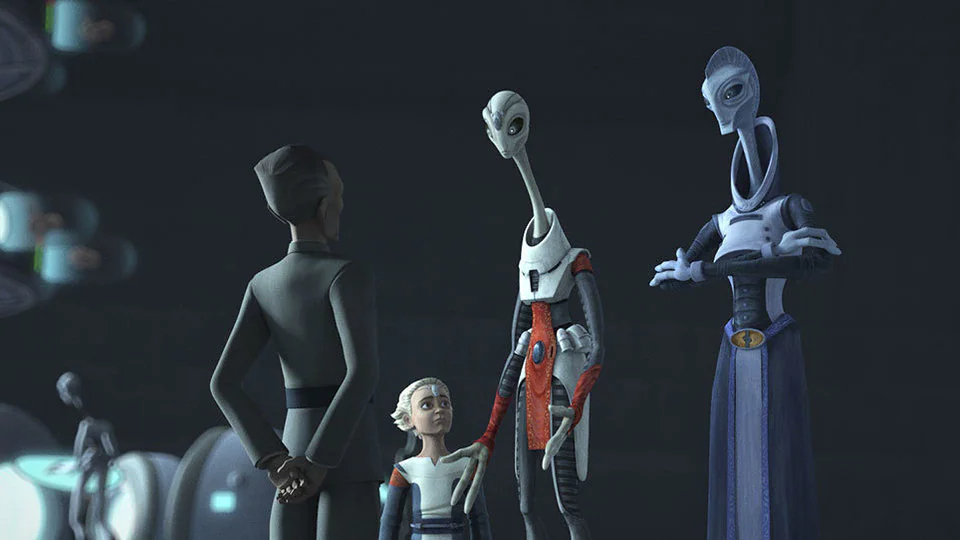 Nala Se is the Kaminoan right beside Omega.

This interview has been edited for clarity.

Q: What would you say makes Nala Se different from other characters you’ve voiced before, and how do you think that she has grown or changed from The Clone Wars to The Bad Batch?

This is the tallest alien I’ve ever played with the smallest lips I’ve ever seen. What I will say is that just being in the Star Wars universe in general but with Nala Se, I think, just wrote a very internal character that was challenging to play at first to be quite honest.

I just somehow kinda connected with her, so I would say that in an on-camera world that I’m usually playing an Asian woman, but I’m suddenly playing this 12-foot-tall alien that has no racial affiliation, it felt very freeing. Simultaneously, how internal she is, is actually very challenging and lovely to play.

Some of the characters I’ve played across the board are really deep, very pensive and thoughtful, and are shot best in close-ups. There’s a lot going in their minds, they’re very intelligent but there’s always layers. I don’t think she’s (Nala Se) occupationally defined, which I think some people perhaps might have assumed from The Clone Wars in the beginning.

With Star Wars The Bad Batch, we’re able to see more of her vulnerability and her attachment to something that she created. So, I think that sort of change was a real delight to play, you know,

Q: Can you tell me what’s next for Nala Se for the rest of the season without spoiling anything?

You’ll have to ask the producers to tease or spoil what’s ahead or they’ll have to kill me, sort of Jedi-sword me or cut off my head. What I will say is that let’s see where the story takes us. I think it’s very interesting with all the characters, with the Bad Batch, Omega, with Nala Se.

I think there’s obviously been an arc and differentiation, so I think it’s already quite a change for her (Nala Se), to have this attachment, to Omega. Why specifically? We’re not quite sure. *wink*

News
The Pokemon Arceus Anime Series Will Start This May

The divisive Pokemon game Pokemon Legends: Arceus is getting a short anime series. And it's airing sooner than you think. The show, Pokemon: Hisuia...

The fifth episode of The Book Of Boba FettÂ Season 1 is now streaming on Disney+ Hotstar Malaysia. Iâ€™ll be discussing heavy spoilers so if yo...