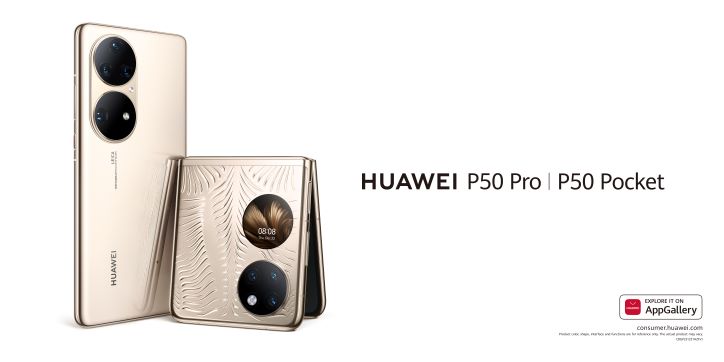 Huawei has announced their next flagship phone, the Huawei P50 Pro, along with the unveiling of their take on the foldable smartphone, the P50 Pocket.

In a press junket held at Sunway Convention Centre, the announcement of the next flagship model was revealed as the Huawei P50 Pro, which is being marketed to break the boundaries of phone photography. Fitted with a 200 times zoomable camera, the phone will feature True-Chroma Shot technology which is said to capture colours and details at 81% of the human eye. The P50 Pro introduces an all-new Dual-Matrix Camera design featuring two rings that house the camera components that will be available in two premium finishes â€“ Cocoa Gold and Golden Black.

The phone retains its thickness and length of the previous model while having a bigger screen and longer battery life, on top of having a borderless and curved screen, so say your goodbyes to those black bars. It has a 3D curved glass display, supporting the full P3 wide colour gamut, up to 1.07 billion colours to deliver accurate and true to life colours. With up to 120Hz refresh rate and 300Hz touch sampling rate, users can enjoy a smoother, more responsive experience. Also, in case you need to snipe someone with your phone, the P50 Pro will be able to zoom up to 100 times while still retaining a clear image thanks to their new Huawei XD Optics technology.

Huawei also unveiled their new P50 Pocket that is sure to give the Samsung Z Flip a run for its money. The phone will be a foldable smartphone and is designed to be a more couture device in mind. The P50 Pocket also adopts the signature P50 Series double-ring design, with one ring housing the camera module and the other being the smart Cover Screen. With the added function of the flipping feature, users can make use of their more powerful back camera in their selfies, while using the Cover Screen as a mirror, which was a rather impressive demonstration of the feature.

The phone folds seamlessly into an ultra-slim, lightweight body from a 6.9-inch, 21:9 display. The refresh rate of the display is up to 120Hz, 300Hz touch sampling rate and 1440Hz high-frequency PWM dimming support to protect usersâ€™ eyes. The phone has a variant in the P50 Pocket Premium Edition designed by Haute Couture designer, Iris van Herpen, which has a gilded, golden look with more lavish grooves on the back.