E3 2018: Why We Are Most Excited About Ghost of Tsushima

When Ghost of Tsushima was first unveiled at Paris Game Week, the response was sort of tampered within the gaming scene perplexed with why Sucker Punch, well known for their flashy, neon-filled open-world franchise, Infamous would attempt at such a little-known period, feudal Japan during the Mongol invasion circa late 1200s.

Prior to today’s presentation at E32018, little was known about the game except for the time period it was set in – during the Mongol invasion of Tsushima. However, the biggest concern heading into E3 would be how Sucker Punch tackle the most important aspect when it comes to games depicting samurai – the sword fighting. Will it be another hack-and-slash ala Metal Gear Revengeance, or would it be more along the lines of Assassin’s Creed / Arkham games? Or will it attempt to be more realistic and punishing ala Nioh and Bloodborne?

Thankfully after today’s world premiere of the game’s gameplay, our skeptical selves are sold on the game. The combat was fluid and varied enough, capturing the intensity as well as the complexity of these swordfights that rarely last more than a minute. To the uninitiated, the art of samurai sword fighting is a practice of perfection and emphasises on the minimum number of movements.

Known for their brutal efficiency, the winner of most samurai sword fights are determined within a few flicks, swings and side steps.Â In rare cases where two equally skilled swordsmen clash, the fights may be prolonged but don’t expect them to last for a lengthy period.

Just recall the scene of Beatrix Kiddo’s fight in House of Blue Leaves in Kill Bill, and narrowing down each kill as single fights. 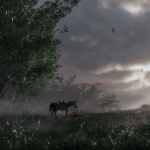 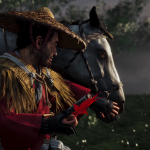 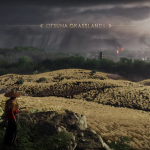 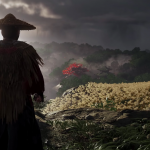 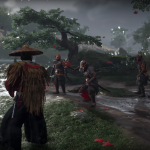 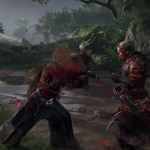 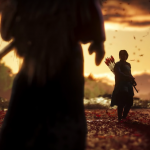 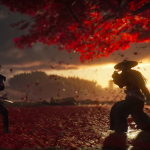 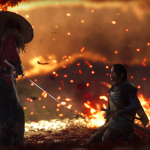 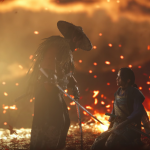 While we didn’t see any button prompts during the E3 demo, we have a feeling that a small window for quick, single-slash kills will be presented throughout the game, rewarding quick reflexes with instant kill moves. Players will have to time their moves according to visual cues and depending on their character’s stance and direction could pull off several cool parries leading up to the killing blow or in some instances, dismemberment of some poor sod.

Of course, the game reminded us a lot of Koei Tecmo’s Nioh but with much more realism to it. A quick segue – Nioh 2 is coming out soon and we’d highly recommend you picking up the first game to prepare for both Ghost of Tsushima AND its sequel.Â As opposed to other similar games, your blade feels much deadlier now and we are pretty sure the same goes for the enemies’ weapons.

We won’t be surprised if Ghost of Tsushima being labelled as ‘the Dark Souls of Dark Souls- style games‘ once released.

Oh, have we mentioned how Ghost of Tsushima is super gorgeous? We were a tad worried as of how they would depict a 13th century Japan but just look at the lighting and over-saturation which sent our spines tingling. You have to watch the segment in full 4K to fully appreciate the amount of detail put into it.

Also, to add extra realism and to make the open world more believable, the devs, in an earlier interview claimed that there will be minimum hand-holding in the game, such as the lack of mini-maps thus encouraging players to take initiative to explore their surroundings themselves.

Surely sound like a game we’d be sinking our teeth in and we just can’t wait for the game to be released. Our hope is to see it before next year’s E3 and with tons of games slated for February release, our guess is that PlayStation will push Ghost of Tsushima’s release date to April.

So what’s YOUR favourite reveal from PlayStation’s E3 2018 press conference? Excited about Ghost of Tsushima as well? Then tell us why in the comments section below!

Ah, the eternal argument of who's stronger in a fight? Goku or Naruto? Yusuke Urameshi or Pegasus Seiya? Wonder no more, because Jump Force is the wis...

Now we're down to #21-#25 on Southeast Asia's final word in GOTY stuff in video form. Guess what these games are? https://youtu.be/DmgdQum89vw Don't...

Disney Plus will be arriving in Malaysia on the 1st of June with a price tag of RM54.90 for three months. Disney+ Hotstar Malaysia offers a variety of...