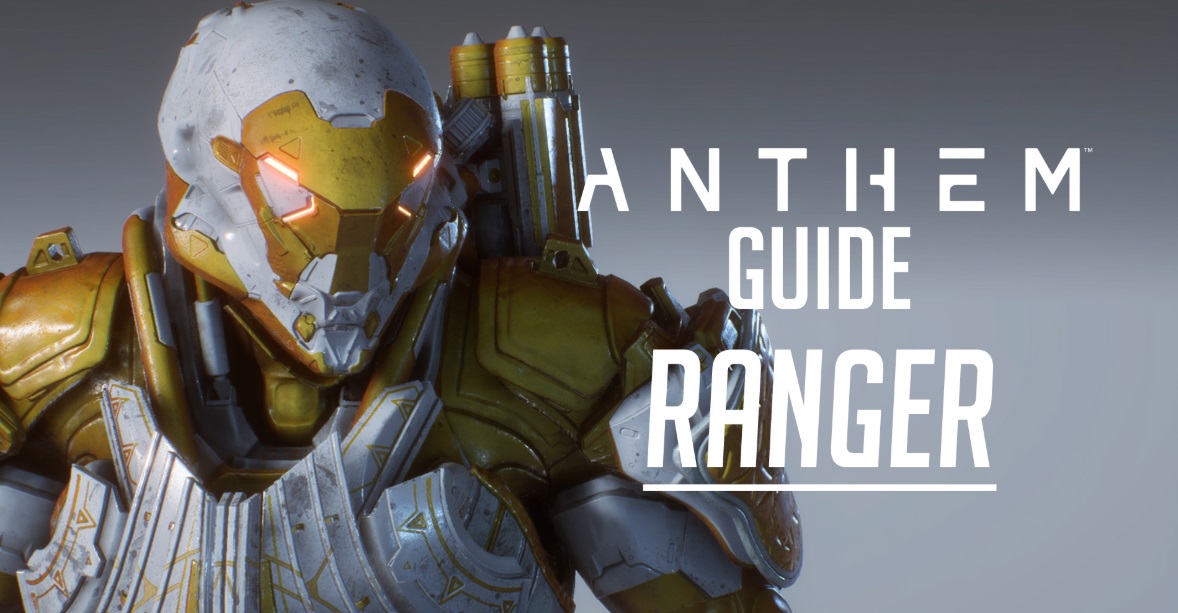 This Ranger-focused guide is courtesy of our pals at PlayStation Galaxy. Check out the original here.Â

Anthem is out for 6 days now and Iâ€™ve already maxed out to level 30 and already reached Epic status for my Ranger Javelin. At the time of this writing, I recently finished the mission where I have to find Haluk at the Fortress of Dawn, completed Tyrant Mines in Grandmaster Level 1 once (two Missions and one Agent Contract on Grandmaster Level 1 difficulty), already got five Masterwork weapons (two Wyvern Blitz, one Artiniaâ€™s Gambit, one Elemental Rage, and one Avenging Herald), one Masterwork Frost Grenade, and one Masterwork Component (Airborne Advantage). I still have to write my review before this week will end though.

I stumbled on guides through guides and noticed that they have only spent 10 hours or even just looted a couple of Rare items and mostly Uncommon ones in below 200 Power Level. I wonâ€™t name any publications, but I would rather read guides that were written by a player who spent his or her time getting as far as Level 30 and gotten a few Masterwork gears â€“ and took Tyrant Mines in Grandmaster Level 1 difficulty at least once or twice.

After 29 hours with the game, I’ve come up with a guide on how to use the Ranger Javelin effectively.

The Ranger Javelin is the standard suit there is in Bastion. Itâ€™s not as bulky and spongy like the Colossus, itâ€™s not as fast as the Interceptor, or even cast lightning bolts on top of an enemy group, but a balanced Javelin thatâ€™s great for players who wanted to still pack a lot of damage and can easily outmaneuver enemies.

It has an Assault Launcher, a Support Gear, and can pack Grenades. You have to utilize what you have equipped, change loadouts when needed, and have the right mix of Components to maximize your play using the Ranger Javelin in Strongholds, World Events, Missions, and Agent Contracts.

If you get tired of changing Assault Launchers to Pulse Blast and other gears, you can use the extra 4 loadout slots to switch back and forth easily in the Forge. In my case, I have four specific saved Ranger loadouts with their own armor customizations (for the sake of looking cool) and named them for certain scenarios:Â Frost DefensiveÂ (Missions/Agent Contracts),Â OffensiveÂ (Agent Contracts),Â StandardÂ (Missions), andÂ TyrantÂ (for Tyrant Mine Strongholds) â€“ Iâ€™ll get into specifics about my different Ranger loadouts in a separate article.

The most important core aspect of each Javelin is its Component. Some of these Components are unique for each type of suit, and this is where you have to get the right mix of gears to get the most out of your Ranger Javelin.

There are 11 Components in total exclusively for the Ranger Javelin, each with its unique features that can be proven useful in combat.

Ranger Combat AugmentÂ â€“ Increases combo damage by 50% of base damage.
Useful for:Â Doing combos, initiating with a Primer Grenade (like a Frost or Inferno Grenade) or Assault Launcher (like the Venom Darts) then setting the combo off with a Frag Grenade or a Pulse Blast can increase only its base damage by 50%.

Advanced CircuitryÂ â€“ Increases melee damage by 30% of base and electric effect by 30% of base.
Useful for:Â The Shock Mace (pressing Triangle) melee attack will get additional damage with an elemental effect.

Assault AugmentÂ â€“ Enhances the assault launcher to increase damage by 5% of base damage.
Useful for:Â All Assault Launchers like the Blast Missile, Pulse Blast, Spark Beam, Seeker Missile, and Venom Darts will all get a slight increase in damage.

Convergence CoreÂ â€“ Increases impact damage by 35% of base and decreases blast damage by -35% of base.
Useful for:Â Seeker Missiles and Blast Missiles. With the Seeker Missiles equipped, damage dealt by impact will be at around 135% on a single enemy. However, with the Blast Missiles equipped, its area-of-effect damage will decrease from 100% to 75% while maximizing its impact damage to the targeted enemy by 35% at the same time.

Crossed ArmsÂ â€“ Increases blast damage by 50% of base and lowers impact damage by -20% of base.
Useful for: Blast Missiles, Frag Grenades, and Sticky Grenades.

Firearm Calibration CoreÂ â€“ Increases damage with all guns by 25% of base damage.
Useful for:Â All weapons.

Vented ThrustersÂ â€“ Increases the threshold before overheating occurs by 35% of the base threshold.
Useful for:Â Flights.

Airborne AdvantageÂ Â â€“ Increases impact damage by 50% and decreases blast damage by -20%. Hovering increases all resistances by 10%.
Useful for:Â Seeker Missiles and Frag Grenades for higher damage since it does not have Blast effects.

Understanding each feat is significantly important as this shows how strong your Javelin will become.

Assault Launchers provide tactical strengths for your Javelins, especially with the Ranger. Since most of its ability is to set off combos to maximize the damage dealt to an enemy, the Ranger Javelin can effectively dominate the battlefield when its Assault Launcher is used properly.

Blast MissileÂ â€“ Clear the field with a missile that damages a huge area around the point of impact.
Seeking MissileÂ â€“ Fire a projectile that seeks out a single target and others immediately around them.
Pulse BlastÂ â€“ Blast a single target with a massive energy burst
Spark BeamÂ â€“ Unleash a beam of energy that does continuous damage to anything it touches.
Venom DartsÂ â€“ Inflict burning acid damage with a volley of darts.

Argos MaceÂ â€“ Upgraded Blast Missile that explodes on impact. This also detonates an electric explosion when defeating an enemy
Avengers BoonÂ â€“ Upgraded Pulse Blast with the Strikerâ€™s Strength effect, which increases melee damage by 110% for 20 seconds when hitting an enemy with this weapon.

Grenades are pretty standard for basic troopers, and in Anthem, itâ€™s only the Ranger who gets to use them.

Frag GrenadeÂ â€“ Blast everything in a large area with massive damage.
Frost GrenadeÂ â€“ Freeze your opponents in place.
Inferno GrenadeÂ â€“ Set your enemies on fire, dealing immediate and continuous damage.
Seeker GrenadesÂ â€“ Lob in one grenade that splits into multiple.
Sticky GrenadeÂ â€“ Hit an adversary with a grenade that latches onto them, dealing damage with extreme prejudice.

Explosive BlazeÂ â€“ Upgraded Inferno Grenade that detonates a fire explosion after applying the fire effect to 2 enemies.
Grand OpeningÂ â€“ Upgraded Seeker Grenade that splits into seeking submunitions. Has the Ambusherâ€™s Fury effect, which grants 75% increased weapon damage for 20 seconds when defeating enemies from above.
The GambitÂ â€“ Upgraded Sticky Grenade. Hitting an enemy with this grenade detonates an ice explosion.

Rangers can act like supports too in certain situations. Need a place to take a breather? No problem! The Ranger can deploy a dome shield. If you need an increase on weapon damage, the Ranger can set up a spherical shield that enhances it for a short period of time but the caveat is that it does not protect you from incoming enemy fire.

While this doesnâ€™t seem like much, both support gears that the Ranger have can be vital to your expeditionâ€™s success.

Bulwark PointÂ â€“ Keep enemies out of your bubble with a spherical shield that protects your squad.

Major tip for using the Bulwark Point: If you want to use the Bulwark Point as means to block incoming attacks for a long period of time, it wonâ€™t work. The Bulwark Point can help sometimes especially reviving downed squad members, but not when Legendary and Elite enemies are throwing everything they have at your shield. If theyâ€™re melee based attack units, theyâ€™ll just waltz right inside.Â In short, use the Bulwark Point to defend against heavy attacks and then in a second or two, fly out and look for a place where you get proper cover; and to also repair your fellow Javelin since it gives you the right amount of time to bring them back up and escape.

One of the greatest feats of Anthem is its Combo mechanic. Meaning, you can use a combination of attacks â€“ may it be from you or your squad members â€“ to increase the damage output onto enemy units. Teamwork is key when taking expeditions in higher difficulty levels, especially in Grandmaster due to the fact that theyâ€™re harder to kill and you have to take them out as fast as you can.

Unlike the Colossus, Storm, and Interceptor, the Ranger basically initiates the combo by throwing Primer attacks at the enemy so fellow squad members can set off the combo for maximum damage. It doesnâ€™t mean you are not able to do this as a Ranger, you can since there are Assault Launchers and Grenades that can be Primer and Detonators.

Best Combo Mix As A Ranger:

With the ability to fire twice using the Venom Dart Assault Launcher, you can get to trigger a combo on two enemy units affected with a blast detonator like the Frag and Sticky Grenades. Even if there are only two enemies for the damage combo, all other enemy units nearby will be affected with the Frag/Sticky Grenadeâ€™s blast damage. Itâ€™s a win-win situation but this requires a lot of skill and timing.

Some may say the Frost Grenade paired with the Pulse Blast is highly effective against enemy units, this is partly true â€“ but only for some cases. If youâ€™re up against tons of hard-hitting Elite units, especially Legendary brutes, you canâ€™t take them alone with just the Frost Grenade and a Pulse Blast combo. You can only take them out one at a time, provided that your Grenade cooldown duration is quick, you can take out 2 to 3 max. The Frost+Pulse combo is deadlier if you focus on a single target, not groups of enemy units.

I hope this basic guide will help you through your adventure as a Freelancer Ranger in Bastion! After my review of Anthem by the end of the week, Iâ€™ll have an article out that focuses on builds and share to you what I have for my Ranger Javelin.