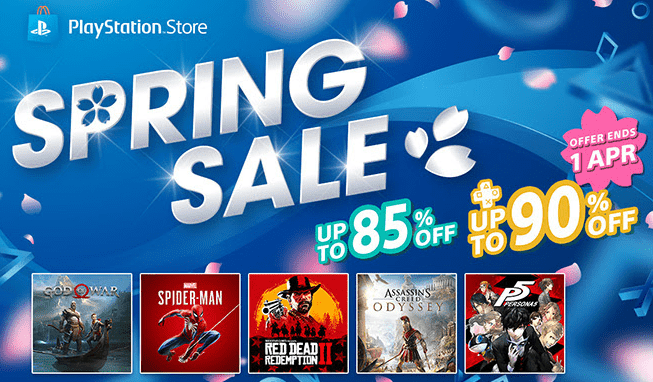 Another major sale is upon us, with great deals galore. The PlayStation Store is currently hosting an ongoing Spring Sale, which is taking place from now to 1 April 2019. What makes this sale even more special is that users stand to obtain an additional gift for participating in this sale.

Users who spend RM300 or more during the PlayStation Spring Sale will be eligible to receive an additional 15 percent discount for their purchase. They’ll only need to enter the code in the Your Basket page just before making payment.

Here are some of the best deals in the PlayStation Spring Sale:

This title by Sony Santa Monica has won many accolades and critical acclaim since it launched in April 2018, and even one as recent as yesterday when it was awarded the Game of The Year Award at the Game Developers Conference (GDC) 2019.

It’s currently half off, so it’s the best time to catch up with Kratos and his son, Boy (I mean, Atreus).

Many may have written this game off as just another Assassin’s Creed game, but this one might be the best one yet. We awarded it a 9/10 in our review, and at half off, there’s no better time to check out this greek adventure.

With its Firestorm battle royale mode coming out soon, here’s your chance to get into the action.

Many still regard this CD Projekt Red game as a masterpiece of gaming and rightly so. It’s only about RM50+ right now on the PlayStation Store and that’s the cheapest I’ve ever seen it’s been in a long time.

This is a relatively new addition to the PlayStation Store (November 2018) and all three games are now available in one easy package. Well, except Batman: Arkham, but that’s the black sheep of the Arkham family anyways.

It’s a massive sale, so there are a lot more offers than the ones listed above. Head on over here to check out the PlayStation Store Spring Sale.