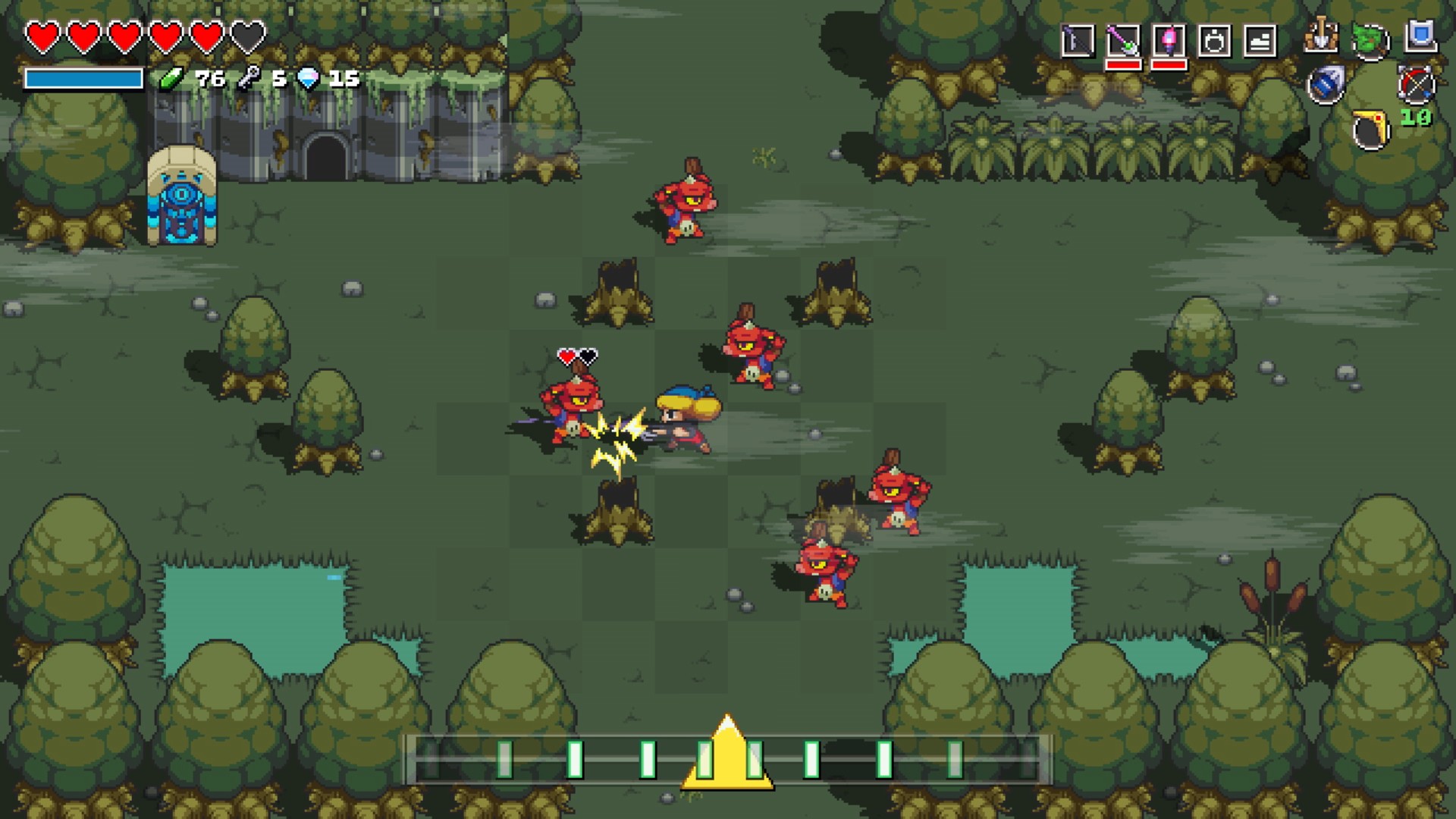 When you think of the term “spoiling the market”, you think lazy spin-off titles and offshoots like a lot of Final Fantasy mobile games out there. But you also think of other titles like your Auto Chess games in Dota 2; an offshoot of a mod that is so addictive it’s making other devs make better spin-off games. So in essence, “spoiling the market” saturated with mediocrity and creatively-bankrupt products is a good thing.

That’s what Cadence of Hyrule is doing: it’s making every other spin-off game look bad because of how top-notch it’s handling the Legend of Zelda brand.

Made by Brace Yourself Games, the same folks who did the super-fun-but-ultra-hard roguelike Crypt of the Necrodancer, Cadence of Hyrule is the open world “Zelda-fied” version of the music rhythm RPG. You explore the vast lands of Hyrule, you collect special key items to help you on your quest as either Link or Zelda, and you have to defeat bosses to eventually rid the world of Ganon.

Sounds standard for a Zelda game, except you have to move and fight in sync with the beat of the background song playing. You’ll stumble if you move out of beat, which means you’re easy pickings for the bad guys. If you die, you start over from the last Sheikah Stone checkpoint with all of your amassed rupees and equipment gone.

Fortunately, this game takes it slightly easy on you, unlike its predecessor. You still retain your key items, weaponry, and stockpiles of arrows, hearts, and bombs. There’s now a huge emphasis on exploration and progression that feels like it’s closer in spirit to past 2D top-down Zelda games.

You also have three heroes to choose from to suit your playing style. If you love reflecting projectiles and casting manually-controlled fireballs, Zelda’s your girl. If your playstyle is more on brute force, Link can sort you out. Need an all-rounder with a permanent shovel to dig and uncover secret spaces and treasure? Use Crypt of the Necrodancer‘s Cadence. You can switch between them at any Sheikah Stone checkpoint, so go nuts and experiment.

Maps remain constant and aren’t randomly-generated, which means you can conquer your previous roadblocks if you weren’t good enough initially. Or if you mistimed your rhythm and got murdered carelessly. No matter what happens, the controls can’t be put to blame because they’re great.

The game’s aesthetics are also reminiscent of the classic SNES title A Link To The Past, but with more animation and detail. Seriously, this game is lovely to look at and play in motion on your Switch. Hell, there’s even a simple puzzle where you have to play bits of the iconic Song of Storms to proceed. And you have bosses that use music instruments as part of their repertoire and attacks like a bass guitar and the maracas. How is that not charming and utterly in-theme?

And don’t think the devs are chickening out on difficulty: there’s a permadeath mode you can unlock after beating the game if you want to get punished. Honestly, I’m having a hard time looking for faults for this indie-priced Nintendo Switch title. In fact, Zelda decriers might find something to like here, be it the great catchy pumping music, the simple-yet-tricky gameplay that escalates fairly, and the lush-looking art style of this version of Hyrule.

It’s rather astounding that Nintendo is giving an indie studio like Brace Yourself Games a stab at their first-party level IP. It’s a risk that, personally, paid off big time because of how fun and fresh the game feels for Nintendo fans and even action adventure RPG nuts who want a new take on the Zelda franchise.

Besides, it’s hard to find any other game where you’re beating up a four-headed dragon made out of a glockenspiel in-sync with a track from the guy who composed Super Meat Boy’s jams.

Here's When You Can Play The Legend of Heroes: Trails of Cold Steel IV