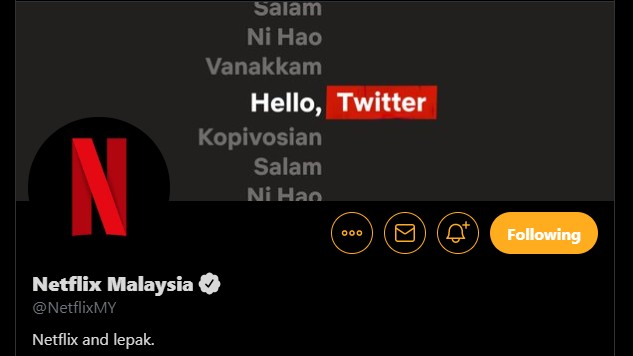 Several days ago, I wanted to tag the official Netflix Asia Twitter account in one of my tweets. To my surprise, the account was unavailable, or shut down for some reason, preventing me from tagging them in my tweet. What could it possibly have meant? I was afraid that it meant Netflix was going to stop supporting this region or something.

Earlier today I finally received my answer. It seems that the official Netflix Asia Twitter account has officially rebranded itself as Netflix Malaysia starting from today and its first unique Malaysian-flavoured tweet, which you can check out below.

Other Asian countries with official regional Twitter accounts include Japan, Indonesia, India, Thailand and the Philippines. This may be good news for Malaysia, as it likely indicates that the Malaysian streaming market is now considered major enough to warrant its own exclusive regional support.

I’m especially loving the Netflix Malaysia Twitter bio, which puts a Malaysian twist on the popular adage, ‘Netflix and chill’.

We’re looking forward to seeing what Netflix Malaysia has in store for the future. Perhaps even Malaysian Netflix Originals in the making? Fingers crossed.