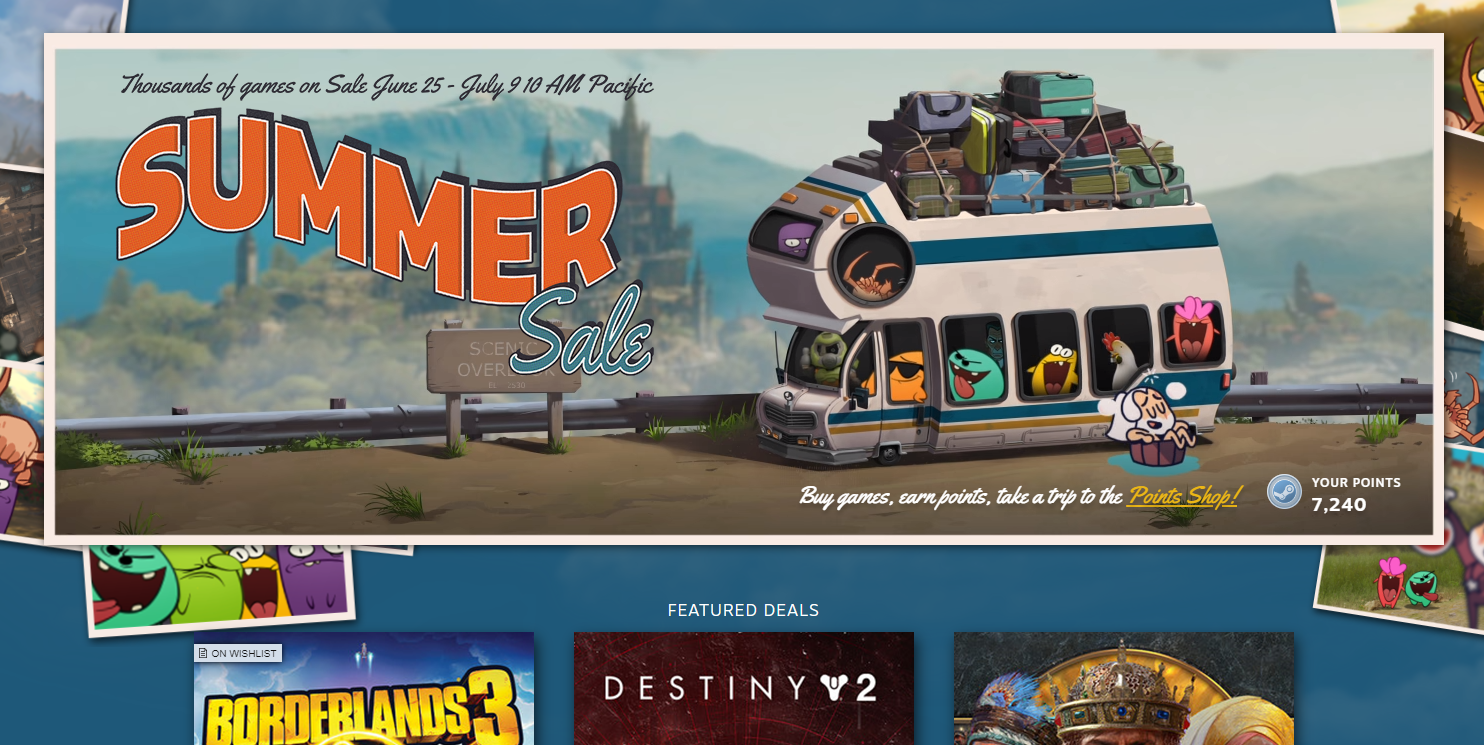 Originally published on 26th June. This article will be updated periodically, at least until the sale is over.

The Steam Summer Sale also introduces Steam Points: if you buy more games, DLC, OSTs, and whatnot this time around, you can accumulate points that you can use to get animated avatars, frames, backgrounds, badges, and chat items. You get 71 points for every S$1 you spend.

This year’s sale will last from 26th June (right now) until 10th July 1am GMT+8. Here are the best deals we’ve found so far.

This is definitely 2020’s most-updated and most-played co-op FPS featuring armed dwarves, mining, and a heckaton aliens to kill. Companies take note: THIS is how you do a “live service” game without overcharging and under-promising your customers.

Isometric CRPG goodness at only RM20 or so. If you’re done with the Divinity and Pillars of Eternity games, do check this one out.

Arguably this year’s best fighting game so far. Get the whole current roster for 20% off.

A calming exploration and puzzle game with loevely retro 80s aesthetics. If that’s your gem, you should give it a go.

Need a late 90s polygonal first-person shooter fix? Dusk will sort that out and then some.

This oddball tower defense game with balloons is now 90% off on Steam.

The latest instalment in the DJMAX series, this entry features more fast-paced music rhythm gameplay from artists like Marshmello, Porter Robinson, and Yukika.

Multiplayer medieval slashing gets more frenetic with this PC title.

There’s a lotta buzz in this open-world RPG. Fight alone or team up with someone while wrestling with a ritualistic spellcasting mechanic and randomized elements with each playthrough.

Want a miserable experience of a game that really makes you feel bad, but don’t have a PS4? Pathologic 2 is the closest you’ll get to an emotionally-wrecking horror RPG with lasting consequences in its game world should you choose to do things the wrong way.

One of the better strategy RPG games from Sega is now at a favourable price. Features a lush watercolour art style, a riveting story about a wartime squad and their charms, and a great turn-based-slash-third-person-shooter battle system.

If you have a decent PC or gaming laptop, you should definitely check out any of the Total War games by Creative Assembly for their epic real-time battles. While Total War Three Kingdoms is the latest historical title, it’s still pretty expensive even with a 25 percent discount.

For a cheaper but just as good option, the fantasy-based Total War Warhammer II is a great game where you can control armies of elves and dwarves, with a couple of dragons and giants for good measure. Then, just watch the chaos unfold.

The Witcher franchise has never been as popular as it is now, with a Netflix live-action series starring Henry Cavill in the titular role currently available (which was actually good). The game is still a masterpiece of narrative in gaming five years on (it released in 2015), and it’s an epic game everyone should experience for themselves. It’ll also be a good primer on what to expect from the upcoming Cyberpunk 2077.

Sekiro: Shadows Die Twice is a Soulsborne game, and that means extremely punishing but oh-so-satisfying gameplay. It was one of our top games in 2019 for good reason, and gamers who relish challenges should definitely check it out. Check out our full review of the game here.

XCOM 2 is another must-have game on PC, especially for those who love all things science fiction and anything from the tactical turn-based strategy genre. Think Final Fantasy Tactics with Soulsborne levels of difficulty.

The XCOM 2 Collection costs a whopping RM385 at full price, so this is a steal, since it contains even the game-changing War Of The Chosen expansion pack. Our advice: start the game with the expansion pack installed. Check out our review of the game here to find out why.

This is simply one of the best Star Wars games ever made, and we say that as hardcore fans of the franchise. It features meaty Soulsborne-inspired combat with a single-player story that somehow manages to respect all three Star Wars eras (Original Trilogy, Prequels and Sequels).

If that price still seems steep, it’s important to note that the game is less than a year old, and that’s already at half price. Check out our full review of the game here.

A hidden gem from Square Enix, this SaGa RPG title features old-school turn-based gameplay and a ton of replayability within its four protagonists. Also, you have 80 playable party members to recruit and create your dream RPG party with.

Shadow Warrior 3 Is Delayed To Next Year