Destiny 2 has reached its epic fourth year, with Beyond Light being the secondÂ expansion release without former taskmaster Activision in the same lot. Naturally, Bungie has taken off the beaten path and has introduced to the players quite several new interesting features that is the main attraction point for Beyond Light.

Itâ€™s the largest systemic change in the history of Destiny 2. If I’m being honest, the expansion feels like a gust of fresh air as the gameâ€™s new direction proves to be fruitful, especially in the form of Destiny 2â€™s storytelling since the days of the first game. After spending almost a week with Bungie’s latest expansion, how does this new experience stack up? Let’s dive deeper into this glorious icy crevasse.

Beyond Light picks off right after Shadowkeep ended. The pyramids youâ€™ve seen on Io, Titan, Nessus, and Mercury has appeared on Europa, one of Jupiterâ€™s moons. The aforementioned planets have been consumed by the Darkness and have simply disappeared, consumed by Darkness, a convenient plot to lay since the planets have been vaulted, and you have been beckoned by the Darkness ever since.

The story begins when your Guardian receives an SOS signal from a familiar face to those who came from the first Destiny. Variks, the Betrayed Loyal has called upon our help as Eramis, the new self-proclaimed Kell of Kells (a Kell is a Fallen Houseâ€™s leader) has begun wielding the Darkness in the form of Stasis. Also, the Exo Stranger has appeared after disappearing from the Black Garden for years, and it appears that she too has an affair with the Darkness, although she points out that the Darkness is simply a tool, and she is using it for good.

The Vanguard is highly sceptical of the Darkness. However, the Exo Stranger, Eris Morn, and the Drifter believe that the Darkness is the teleological approach to overcome Eramis, the Kell of Darkness. You canâ€™t blame them though; Guardians have been at war with the Darkness ever since we were revived by our Ghost on the Cosmodrome.

Eris Morn, Exo Stranger, and The Drifter, all chillin’

Speaking of which, the Cosmodrome is back and it serves as the entry point for new players to get a grasp on the gameâ€™s systems. Also, it is a nice place to drop by and reminisce the good old days of Destiny 1. It is also a good place to farm easy bounties for Light points and gear.

As a highly invested person in the Destiny 2 universe, the story this time around is told properly: in-game, rather than texts lying around the internet, or 1-hour videos explaining surface-level lore. The story is highly intriguing as Bungie finally addresses a few elephants in the room through its many story and side missions: who is the Exo Stranger? What is the Darkness? Should we be in shenanigans with the Darkness? Will we lose ourselves if we start wielding Dark powers? All of these are revealed in this expansion in a satisfying way.

The Darkness Is the Beginning

One of the major selling points for Beyond Light is the introduction of the new Darkness subclass, Stasis. It redefines the playing field by allowing Guardians to slow, freeze and shatter opponents, even bosses can be frozen and struck to deal heavy shatter damage. Some abilities allow you to create new geometry such as walls to create a makeshift cover or control the tide of battle.

The Hunter Darkness subclass: The Revenant.

You begin to wield the Darkness after completing the main story missions and communing with the pieces on the Ziggurat at Beyond, Europa. It will take you about 3 to 5 hours depending on how fast you plough through the expansion’s story mission. Unlike other subclasses, Stasis is unique in that you can equip Aspects and Fragments that enhances your abilities.

For example, the Warlock’s Healing Rift will freeze enemies when cast allowing you to control the crowd efficiently while healing, while the Hunter’s Aspect unlocks the Shatterdive which allows the Hunter to dive and shatter nearby targets on impact. Think it as a Stasis-powered Thundercrash, if you will.

The Ziggurat on Europa

In PvE, Stasis is tons of fun to play with. Farming Lost Sectors and Strikes have never been so fun. Plus, in legacy strikes in which the missions were designed around the old subclasses, Stasis surely stands out from the rest in terms of crowd control, damage, and especially visual and sound. Itâ€™s such an aural treat to hear the shattering sound of Stasis, paired together with the midnight blue shards of Stasis energy.

Based on the amount of Vex murdered here, yep: stasis is fun!

However, the same cannot be said for PvP. Stasis has shaken the meta so bad, that the current state in PvP is deemed to be FUBAR at the moment. Getting frozen in Crucible means certain death, and this has made it complicated for Bungie to balance it out before the next Trials weekend to arrive. Hereâ€™s hoping Bungie can pull off a miracle to balance Stasis between PvE and PvP. As for now, it’s a very one-sided affair.

Europa, the new locale, is beautiful. Frigid, arid, yet stunning. It is filled with mysteries that provides more questions than answers. Youâ€™ll spend most of your time on this planet in the DLC. The story has you chasing Eramisâ€™ lieutenants in what will culminate with a battle with Eramis, which I believe wonâ€™t end there.

Your journey to master Stasis has just begun. The Exo Stranger will guide you through many of the missions to unlock more Stasis powers, against the judgement of the Vanguard. As you discover more and more of the Darkness, the game reveals more about the Exo Stranger. However, as said before, you will be left with more questions than answers, which I believe Bungie will reveal the answer to in due time.

New enemies make their appearances in the game such as the Fallen Brig, who players might recognize as they bear a striking resemblance to Insurrection Prime. They hit hard and can take a beating, either up-close or afar with missile drops. 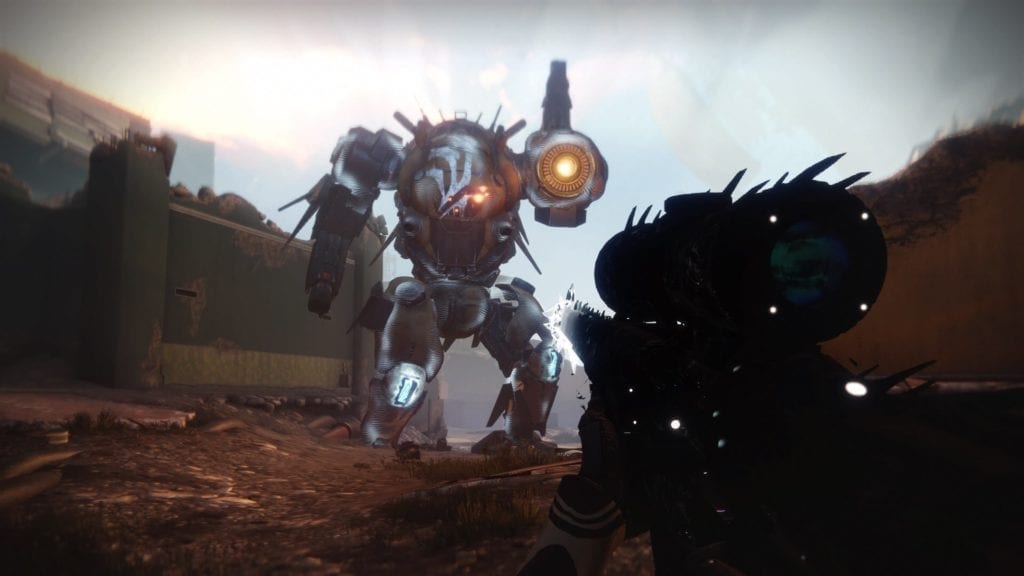 The Vex has also gained a new unit amongst their ranks. The Vex Wyvern. You should fear this heck of an enemy since it can dive bomb you to oblivion. He has his crit spot behind him instead of in front, meaning it’s well protected, and tanky.

Highest cause of casualty in Beyond Light.

Despite these two noteworthy additions, I do feel that Bungie could have included more new enemies into the fray. Facing the same threats over and over against mares the new experience, save from the Brigs and the Wyvern. Another point I hope Bungie would consider is to add more loot into the expansion as most of the tried-and-true weapons of yesterdays have now been sunsetted and made wholly irrelevant in this expansion.

Destiny 2 and its expansion, Beyond Light, isnâ€™t your standard affair of gaming where youâ€™re able to absorb most of the game within the first week. Itâ€™s a slow burn to the end, in which most of the time youâ€™ll spend further unlocking powerful gear, new abilities, new challenges. Itâ€™s a slow burn yet a satisfying one. However, it took me about one day to finish the main story, and a couple of days to get the other Stasis powers and side quests done.

On the other hand, once youâ€™ve finished the main story, the creep to hit the soft power cap of 1200 begins. Dedicated players will be working hard to hit that number as the contents of Season of the Hunt, the first seasonal content of Year 4, will be drip-fed to the players from 10th November 2020 to 9th February 2021. For example, players have tons of Exotic quests to chew on such as the revered Hawkmoon hand cannon, the Lament sword, the Eyes of Tomorrow rocket launcher and so on.

Another end game content awaits the Deep Stone Crypt raid, which will be released on 21st November. The raid will reveal the secrets of the Exos and the Bray family. The race for Worldâ€™s First raid completion begins soon, and this will be an interesting one especially with the new Stasis subclass in play.

So far, Beyond Light is an enjoyable experience for the Destiny 2 fan. Itâ€™s a huge tick in my book, and Iâ€™ve loved the journey up to this point. The storytelling is surely on point, as well as the new Stasis subclass abilities. Its core gameplay loop is maintained and strengthened.

Still, the expansions seem to be lacking one thing at the current moment: length. Bungie mentioned that there might not be an expansion the size of Forsaken soon, this is due to Bungie’s split from Activision leaving them with fewer resources to work with. Add to the fact that Bungie has taken a lot away from the game and replaced them with Europa, it not hard to imagine that the locale might be getting stale after a few months.

Then again, I believe that Bungie has prioritized quality over quantity; it’s pretty evident given its improved structure and gameplay tweaks. For what it’s worth, Beyond Light has the most significant amount of storytelling and gameplay improvements as compared to the other major expansions over the years.

However, it falters in other aspects of the game, such as loot and length. As such, I can confidently put Beyond LightÂ slightly lower in terms of gameplay and storyline than the best Destiny 2 expansion the player base had so far, which was Forsaken.

Despite all that, Bungie has taken a step forward with this expansion. They are clearly on the right path with this stone-cold offering that ironically will warm up even the most jaded of Destiny fans.

Time to get your farm on, Vault Hunters. Starting from 17th January to 31st January GMT+8 , Gearbox will be cranking up the Legendary and Anointed lo...

Review originally published on 7th October. Denis Villeneuve is shaping up to be this generation's Ridley Scott with a string of great science fict...

Feature
E3 2018: The Other Cool Titles You Missed

You've seen the news and coverage about the big titles of E3 like that one Halo Infinite game and that one action game with Nero and his mechanical ar...