This Is How Resident Evil Village Ends: With A Huge Bang [SPOILERS]

By this time, you’ve probably finished Resident Evil Village over the weekend. It’s quite a ride, isn’t it?

This feature is a recap of what transpired in the ending. Keep in mind that I’m detailing the game from a first playthrough perspective; unless you have foresight and are reading a speedrunning guide, you’ll most likely finish the game in 10 hour or more. Part of RE Village’s fun is taking your time exploring and fending off lycans and other beasties.

With that said, here’s your spoiler warning if you want to find out what happened at the end.

All good? Let’s start with the Tall Vampire Lady in the room.

Does Lady Dimitrescu Have A Big Role In The Game?

Hardly. Capcom’s PR and marketing department has done the usual “our main ad highlight isn’t the actual highlight”; Lady Dimitrescu is the first major boss you fight in RE Village. As such, she dies pretty early in the game; about 2 hour plus after you’re done with Castle Dimitrescu. To Capcom’s credit, they did too good of a job marketing the game AND they didn’t reveal the rest of the game because it is stacked and packed.

And it did introduce a key scene where Ethan puts back his right hand after it was severed by Lady D. This gets explained far later in the story.

Long story short, RE Village’s village is ruled by four houses: House Dimitrescu, House Benevieto, House Moreau, and House Heisenberg. Each of them holds a jar that is a piece of your baby Rosemary/Rose. Gross, I know. Nonetheless, you have to get all four to reassemble and heal your baby daughter.

After dealing with Dimitrescu, you go to House Beneviento in arguably the scariest & trippiest stage in the game, and then to House Moreau where you fight mutant fish-man Moreau.

After that, you head down to the lycan stronghold to get the last jar, defeating Urias the lycan king along the way. After getting all four flasks which then gives you a Giant’s goblet that triggers a pathway to another section, you head on over to Heisenberg’s factory. Heisenberg tries to broker a deal with you: team up, use Rose’s powers to defeat Mother Miranda. Ethan does not want to work with a psychopath, so Heisenberg traps him to the lowest depths of the factory.

The leaders of the four houses actually got the raw end of the deal when they met the main bad guy Mother Miranda.Â None of them asked for her to experiment on them. In fact, the other people that she picked off from the village either died or turned into lycans.

The four main houses are the unlucky few that survived. Lady Dimitrescu has a hereditary blood disease that was exacerbated by Miranda’s meddling, hence the vampirism and insect-morphing daughters. Donna Beneviento’s parents died when she was really young, and only had a doll as a friend. Miranda “fixed” her scar and gave her psychic powers.

Heisenberg needed Ethan to let him use Rose’s powers to take out his handler. Moreau’s just really ill.

Heisenberg and the Factory

So this is the divisive part I mentioned in the review that I couldn’t go into detail about; the Factory. This is perhaps one of the most tonally jarring sections of the game, where the stage design feels more like a third-rate gritty shooter in the 2010s than a next-gen RE game. Enemies have weak spots in their chest, are heavily armoured, and can chase you down real quick. 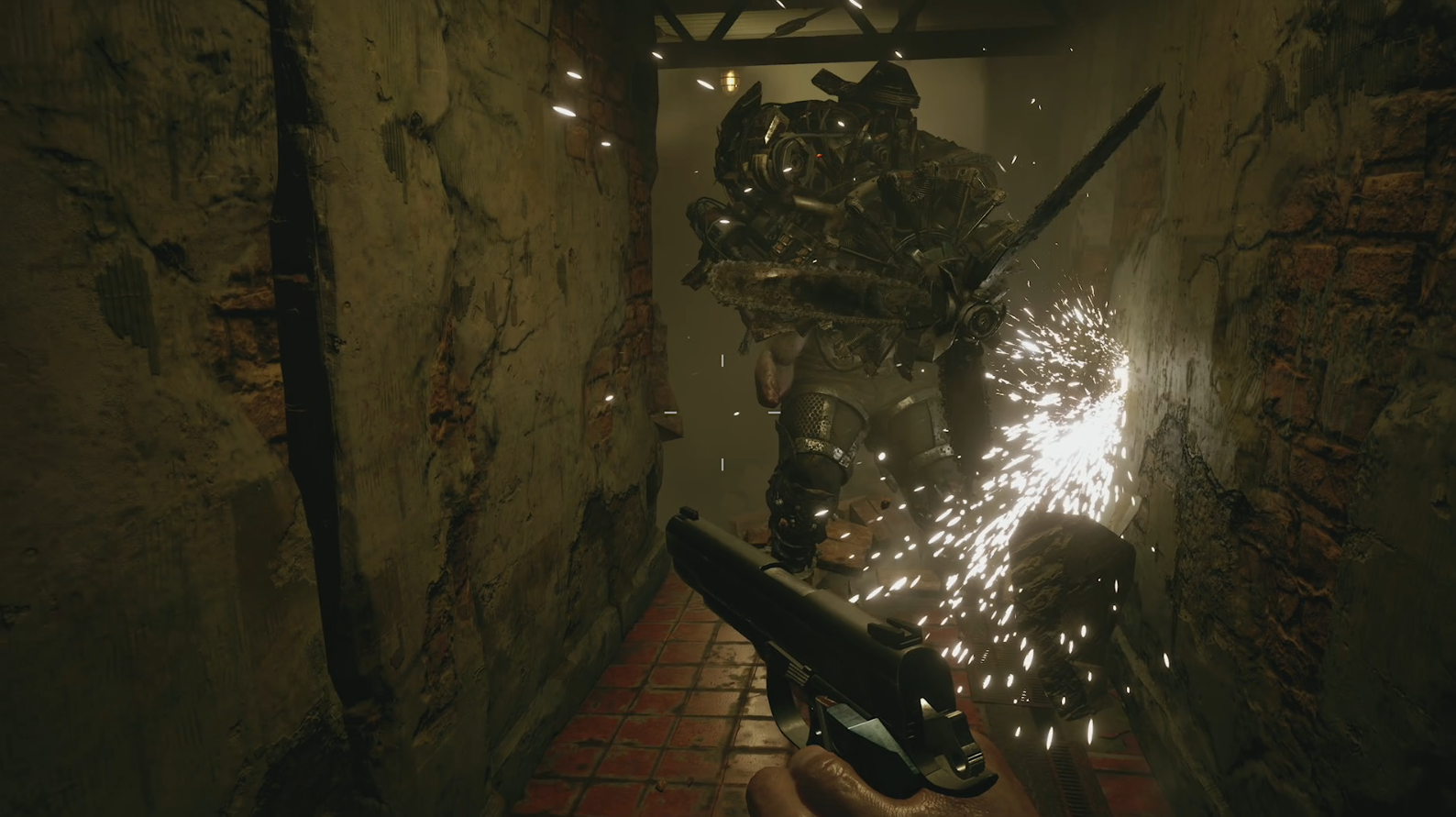 The Sturm “mini boss fight” is the most frustrating battle for anyone playing RE Village for the first time. It’s hard to hit its weak spot unless you REALLY prep for it at the start of the Factory, for one. When it’s close to death, it starts overheating and does a flamethrower attack. When it does this three times, it goes back to regular Sturm mode and you need to waste more bullets on this sponge to attempt it again.

Worst, it sometimes has its back on the wall when doing its flamethrower attack, meaning it’s nigh impossible to hit its back unless you’ve fought this guy more than a few times.

Still, the Heisenberg fight where he becomes a mutant mecha hybrid is pretty epic, especially since Chris Redfield helps you out by letting you pilot a makeshift tank. Yes, you pilot a tank in this boss fight and it’s a great showing of power.

Chris also shared some things with Ethan before the fight: that the Mia he shot down in the intro is actually Mother Miranda in disguise. She can shapeshift using Mold powers, and did so to kidnap Rose away from Ethan. 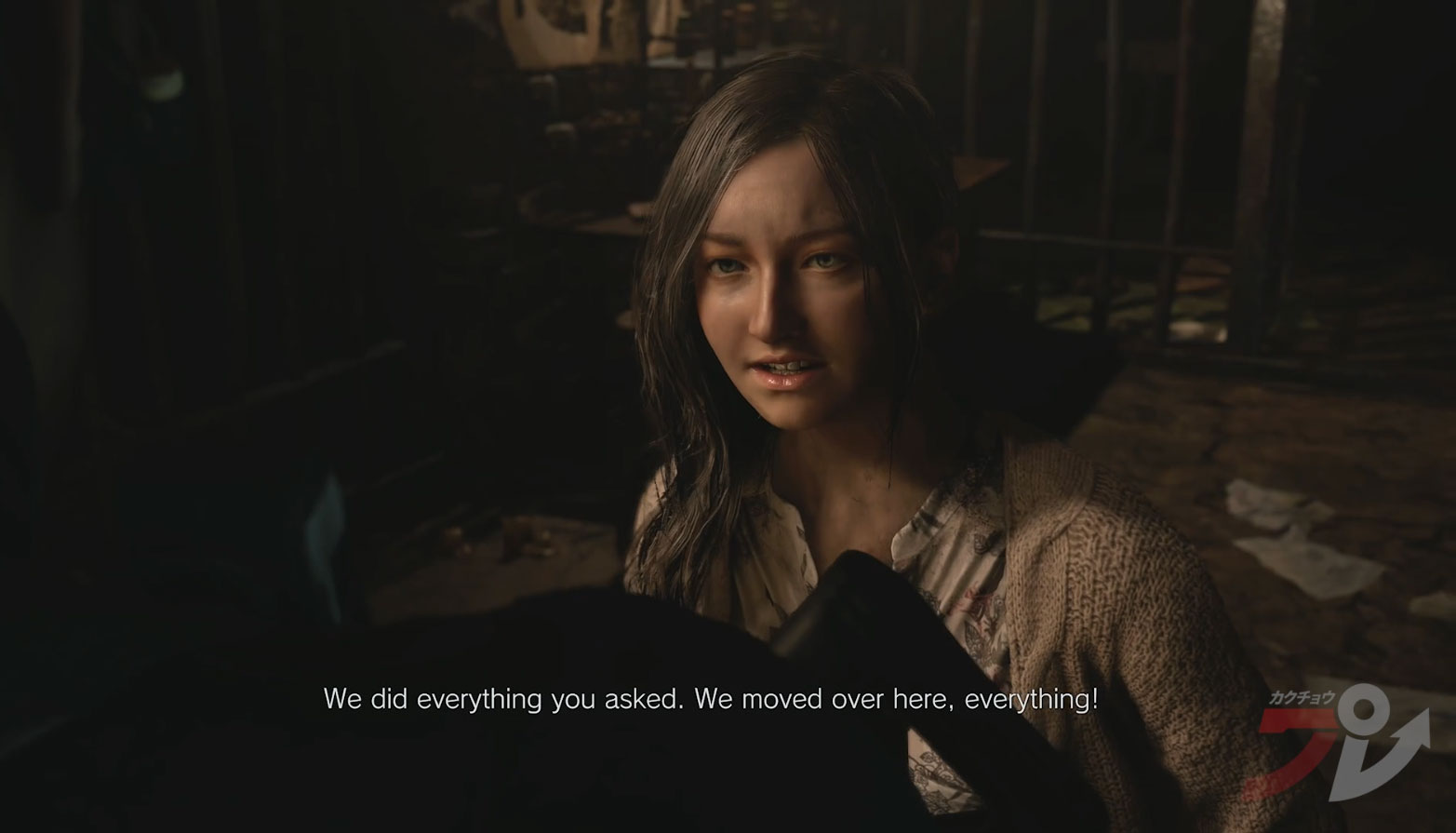 As for the real Mia? Well, she was kidnapped by MM and was experimented on. Chris manages to find her in MM’s lab, and also discovers a bunch of startling revelations.

These include some notes and expedition pictures explaining that she and a few scientists are the ones who are doing all the science experiments and Mold stuff in the village. See, MM began experimenting with the Mutamycete mold over a century ago; she gained immortality thanks to the mold’s infection. She did this in order to revive her daughter Eva, who succumbed to the Spanish flu.

She experimented on the villagers in hopes to find a host for Eva, with the failed subjects resulting in the Lycans, the four lords, and Eveline (wheelchair-bound grandma from RE7). She did this by lying to them that the Cadou she would inject them with is actually medicine to cure them of the flu. She ultimately found a suitable host with Rosemary due to her special abilities inherited from Ethan and Mia.

Also, Mother Miranda happens to be the teacher of one Oswell E. Spencer, a name all RE fans should remember. He’s the guy who started Umbrella Corp, which basically caused the biohazard zombie s***storm that kicked off the first Resident Evil. The logo itself is based on a symbol in a cave the two talked about in the past. 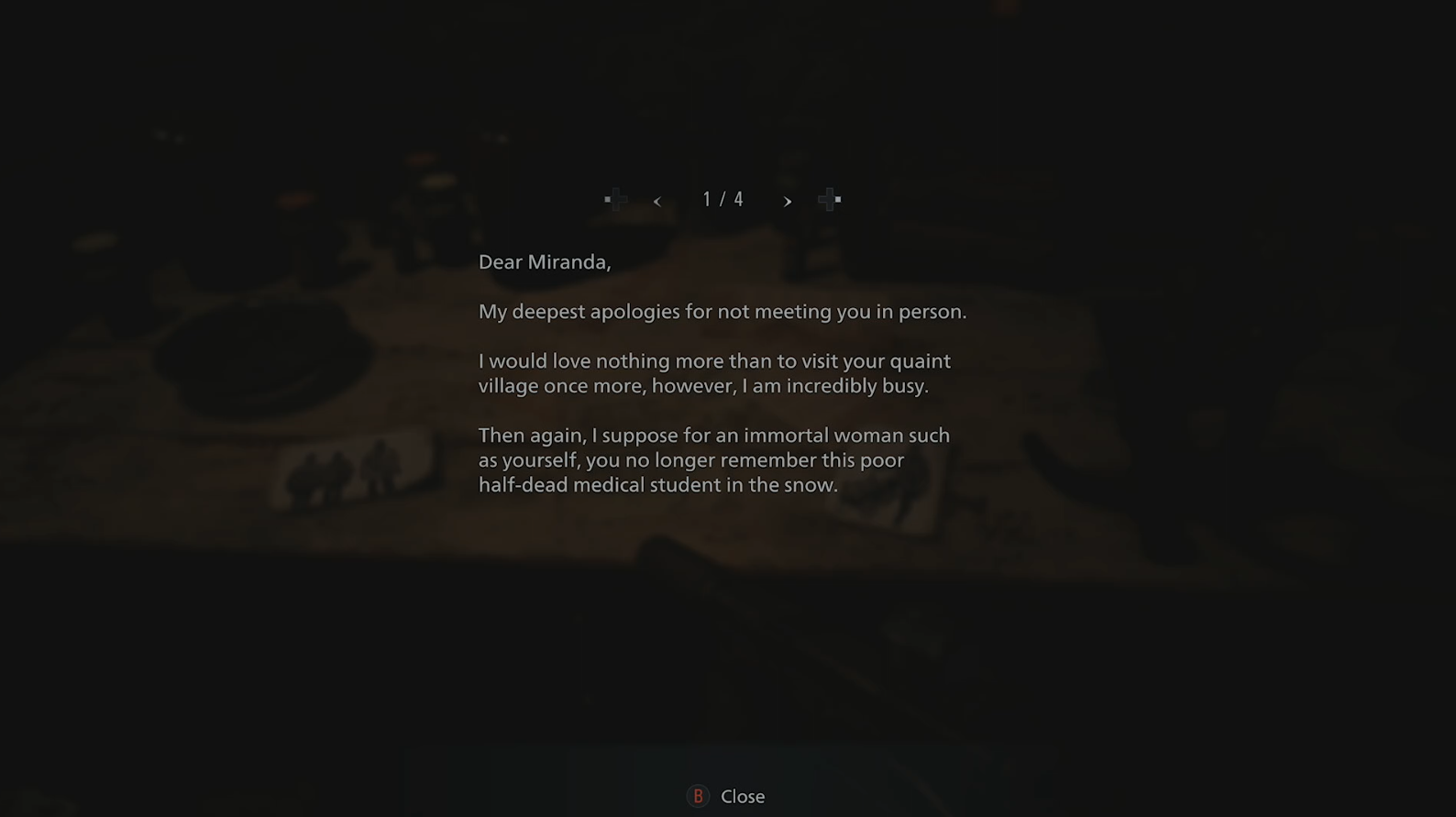 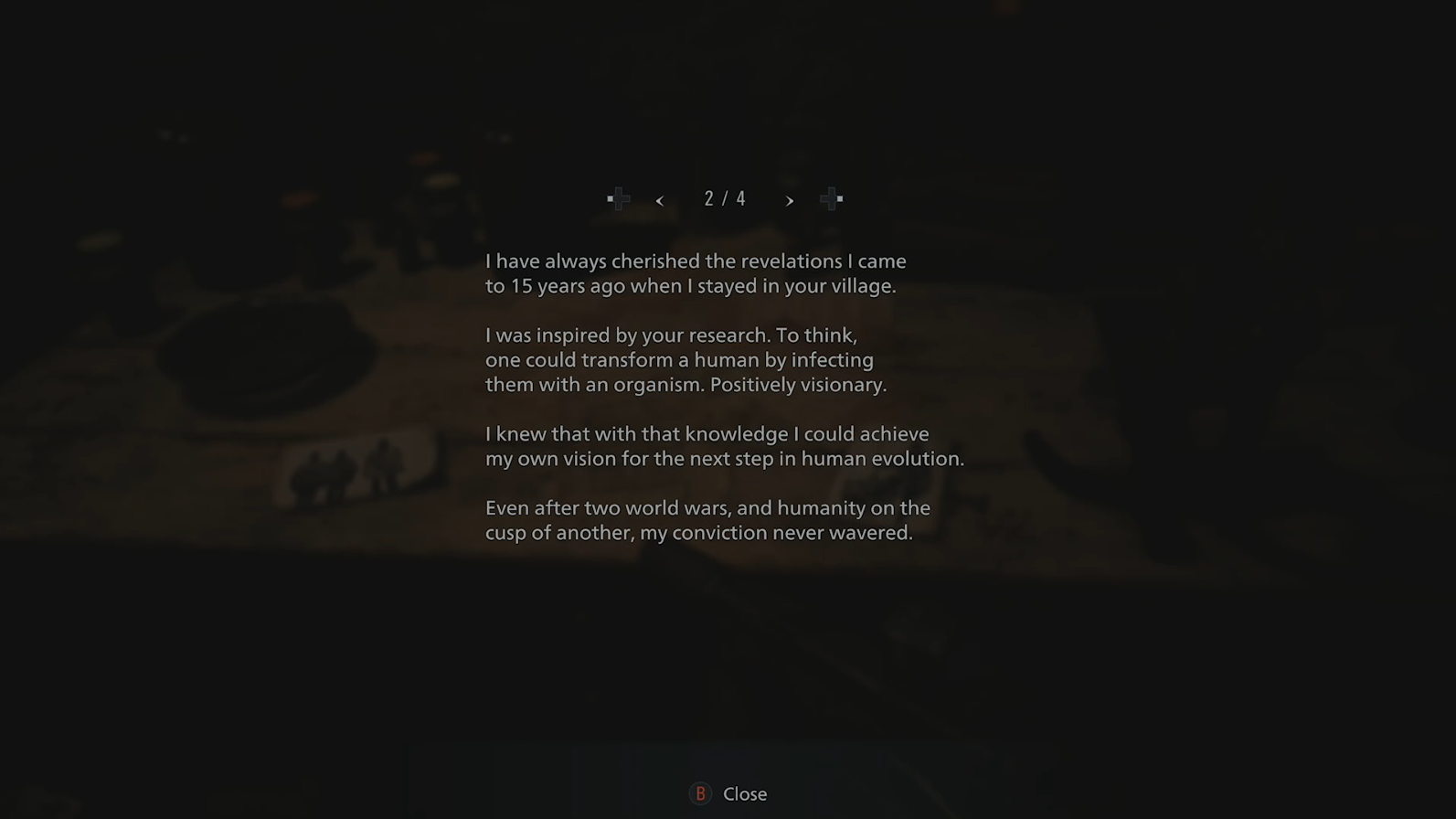 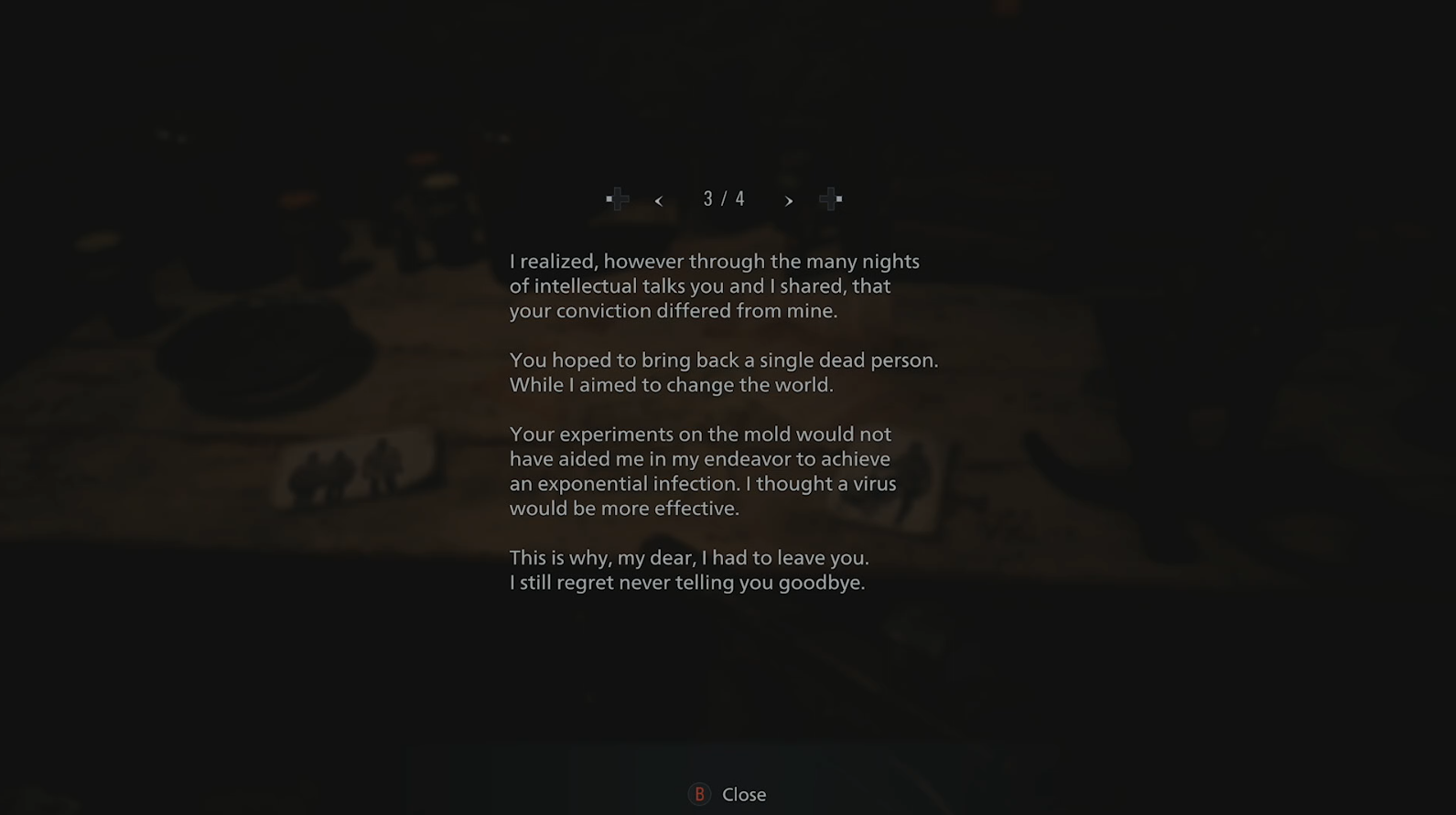 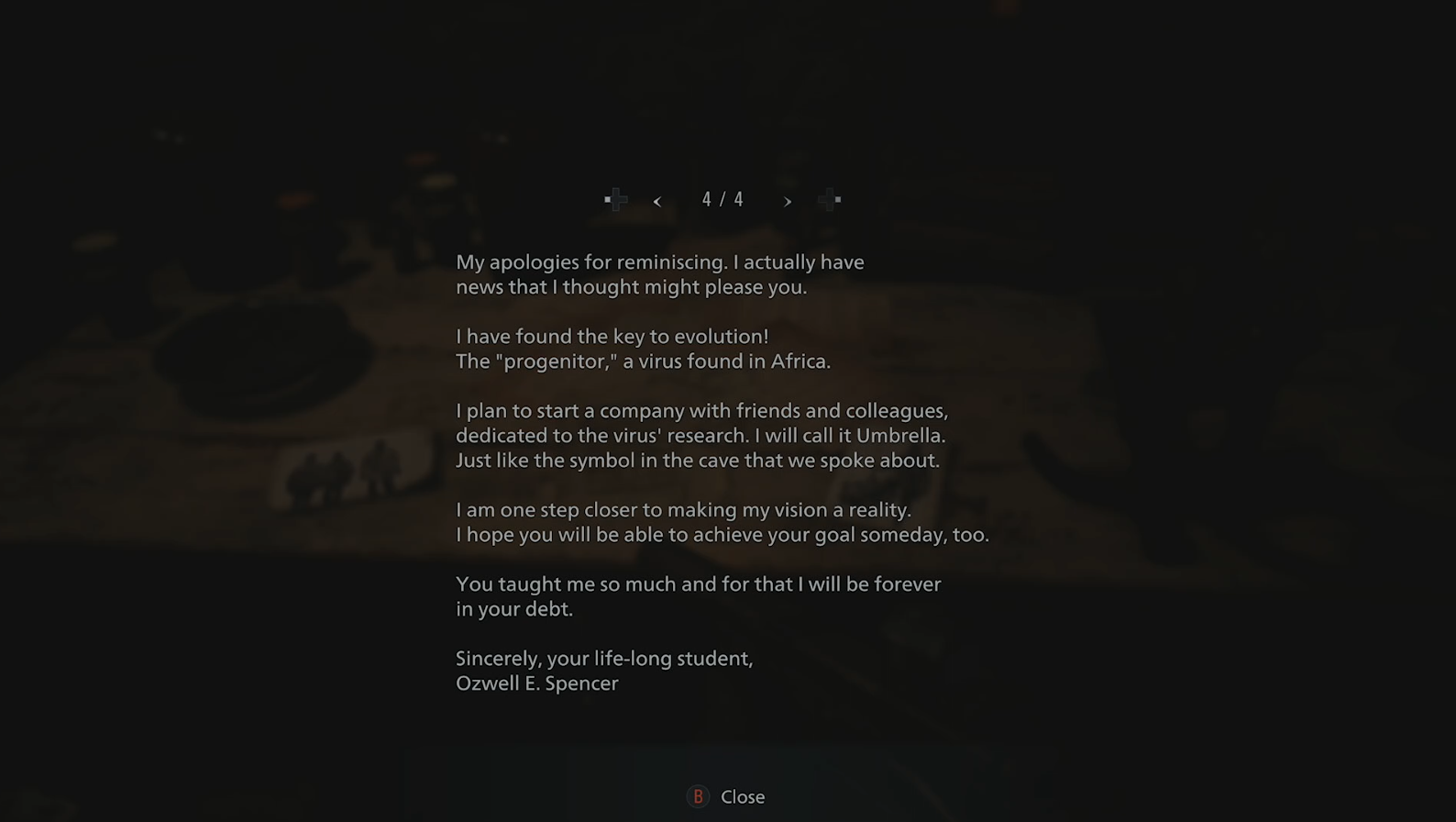 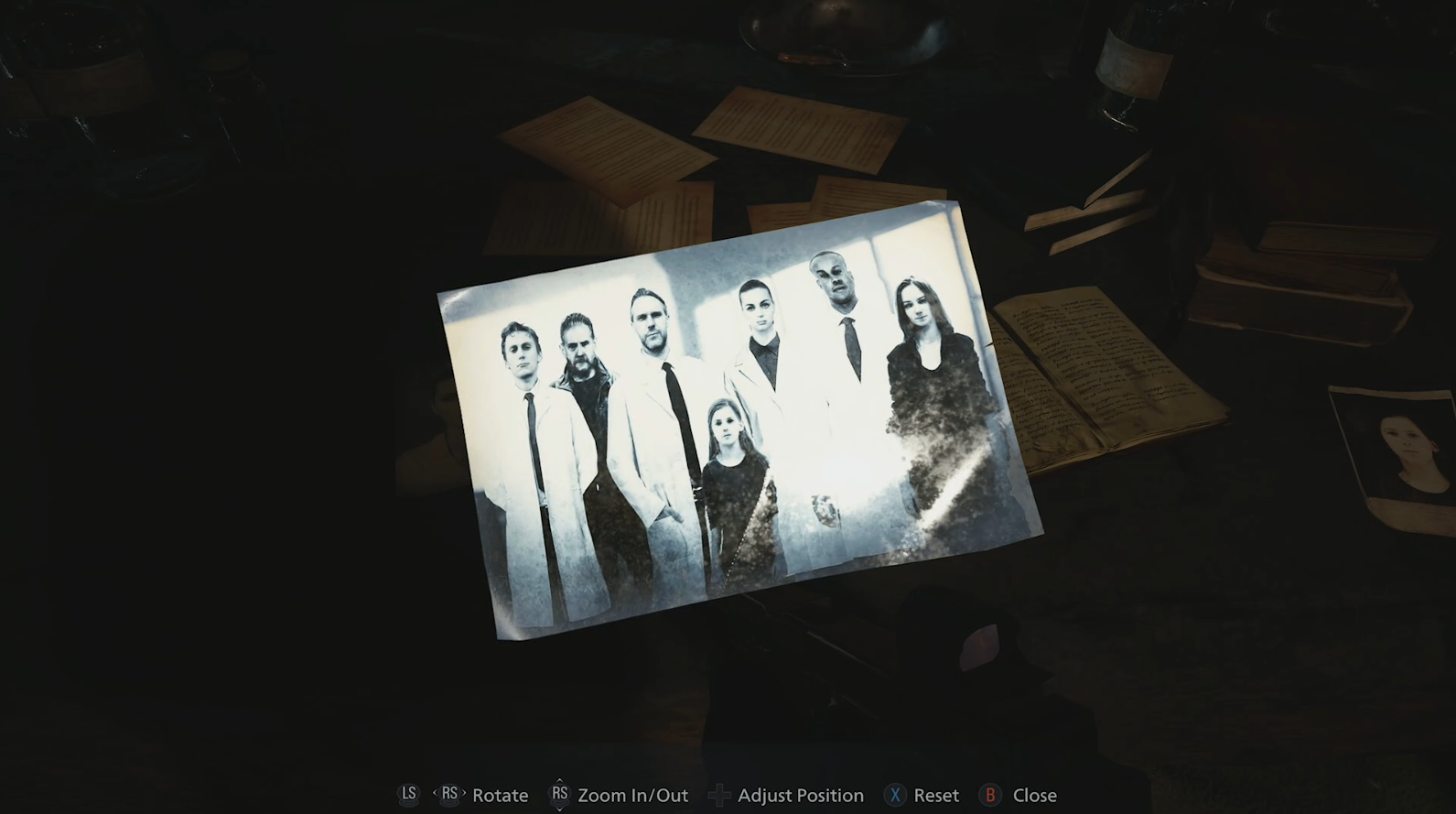 At this point, Chris then realizes the biggest plot twist courtesy of Mia. We’ll get to that in a bit.

After the epic Heisenberg fight, Mother Miranda kills Ethan by approaching him as Mia. Turns out she can shapeshift using Mold powers.

The game now switches over to Chris’ perspective. He infiltrates the village, finds the source of Miranda’s powers, Megamycete, that is sprouting “demon trees & stalks” all over the place, and destroy it. During the invasion, the BSAA (a major RE organization meant to take down biohazard threats worldwide) sent over an assault force to deal with MM.

After fighting the powered-up Urias using satellite lasers on its ass, he finds the Megamycete, which is a giant pulsating glowing heart. He also finds Mia in MM’s lab as explained earlier. 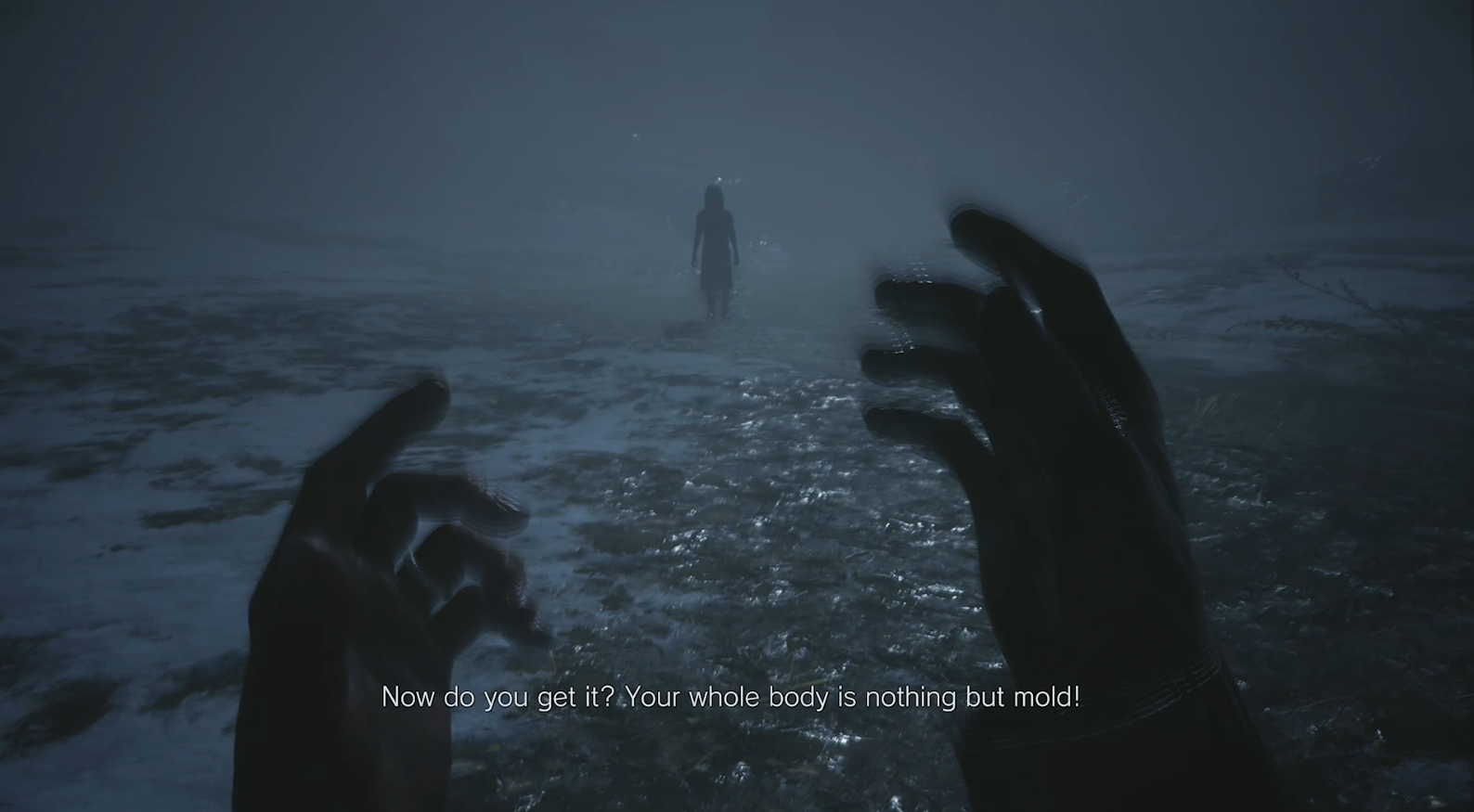 Ethan then experiences a “dream state” where he sees the apparition of Eveline (from RE7) revealing the major plot twist: Ethan has been dead the whole time since the Bakers kicked his head in early in RE7. The only reason he’s still alive is because his infection back in RE7 via the mold gave him regenerative powers, fixing all of his previous injuries. Also, the Duke rescues and transports Ethan to the ritual site for the final confrontation. He’s a nice guy, naturally.

He fights Mother Miranda in all her various forms, with one of them being a nod to RE4‘s Saddler. After that, she dissipates. Ethan rescues his child Rose, but at the same time, he’s decomposing because his regeneration powers cannot keep up with his heavy injuries. He hands Rose over to Chris Redfield, tells him to escape, takes the detonator, and then does the noble sacrifice hero thing and blows up the whole village and the Megamycete.

The BSAA soldiers that were sent to the village were organic bioweapons. Chris is obviously pissed and orders his squad to head to the BSAA’s European HQ.

After the credits, we now see Rose all grown up. She visits her father’s grave, and then she’s picked up by an undisclosed organization to continue her training and tests. As she and her escort drive off into the distance, an unknown figure is seen approaching their vehicle. 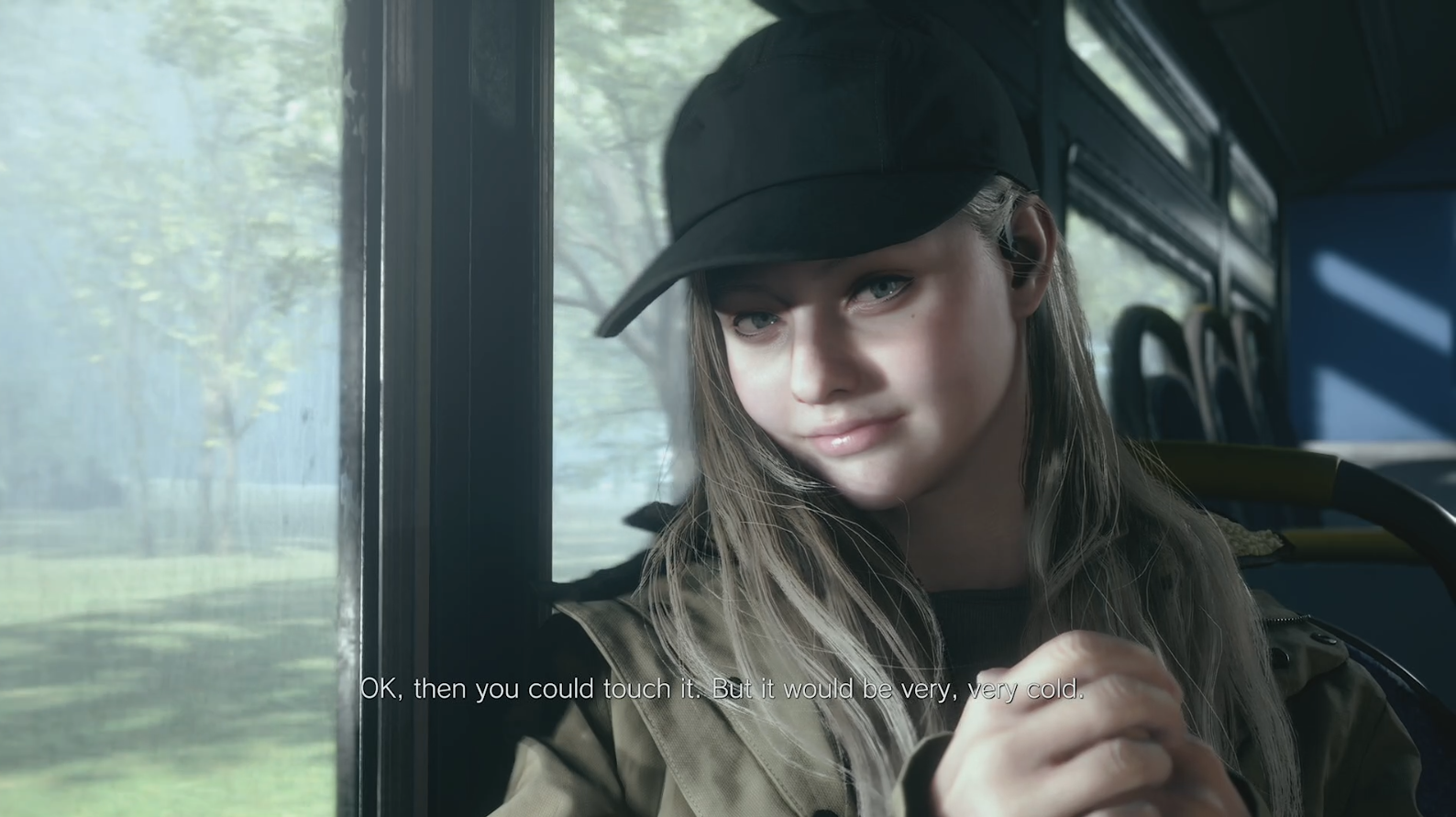 She also reveals to her escort that she has powers Chris doesn’t know about, after she loses her cool due to a joke made at her expense. 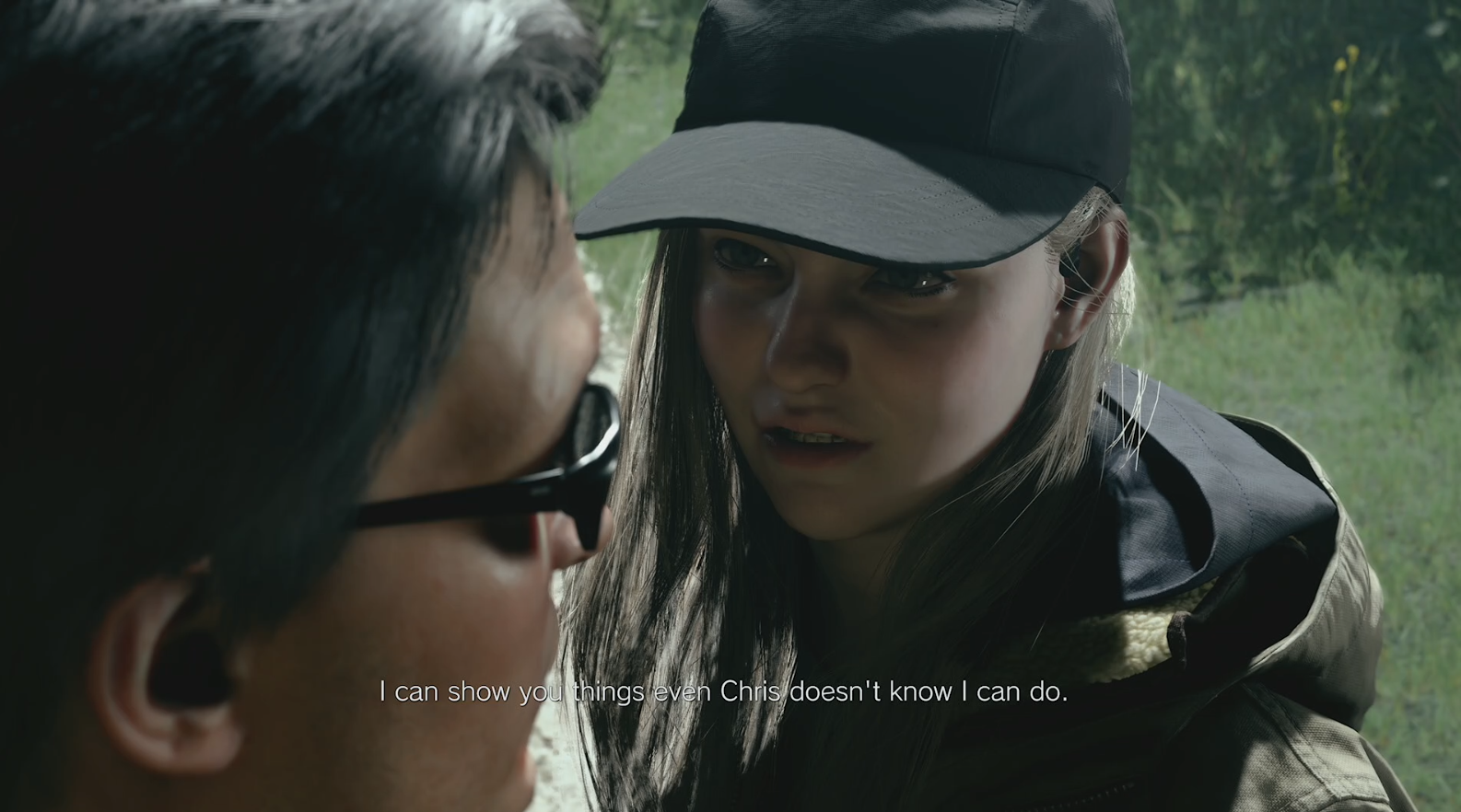 So What’s Next For The Series?

Here are the takeaways.

In any case, RE Village is a worthy entry in the RE canon, craziness and all. Great job, Capcom!

Feature
Remember When From Software Did Action Games? Here's A Reminder

Way before From Software loved testing and torturing players with the Dark Souls and Bloodborne games, they had a hand in creating some of the most be...

Disclaimer: Diablo Immortal is out right now in select regions. This update will be updated periodically to reflect the game's numerous changes post-l...