Genshin Impact Players Go On A Review-Bombing Spree; Here’s Why

Ticked off at the lacking anniversary rewards and other factors, Genshin Impact players are doing the opposite of celebrating the game’s anniversary month. In fact, they’re review bombing games that have ties to the online RPG.

At first, players are review bombing Genshin Impact on the Google Play Store for said stinginess. Note the influx of 1-star reviews below: 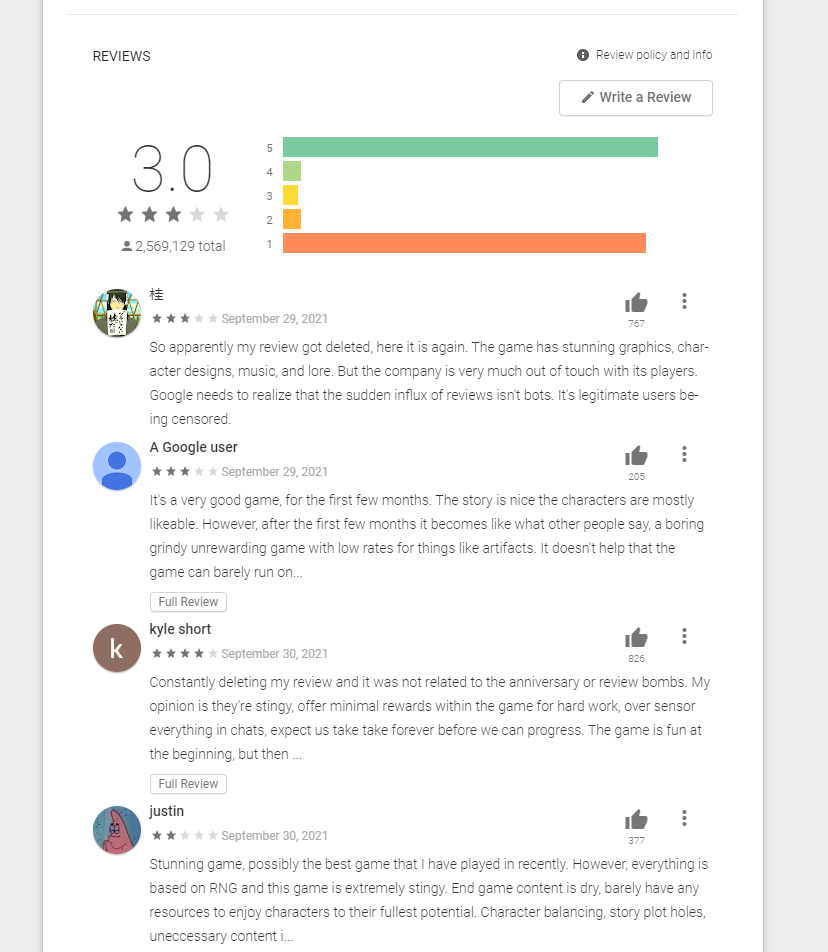 Some of these players are complaining about Genshin Impact in other mobile games, with some of them not even being made by its makers Mihoyo. The following titles include Honkai Impact,Â Arknights,Â Tears of Themis,Â Clash of Clans,Â Cookie Run Kingdom,Â Fate/Grand Order,Â Epic Seven,Â Punishing Grey Raven,Â Dragalia Lost, andÂ League of Legends: Wild Rift. Both Honkai Impact and Tears of Themis get the highest number of review bombs since they’re made by Mihoyo. 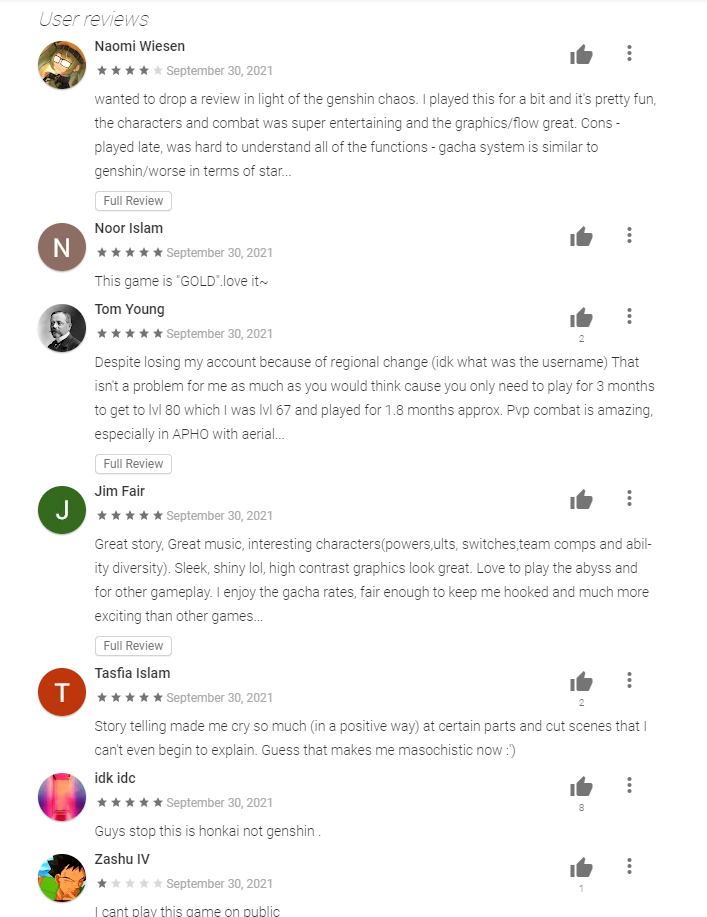 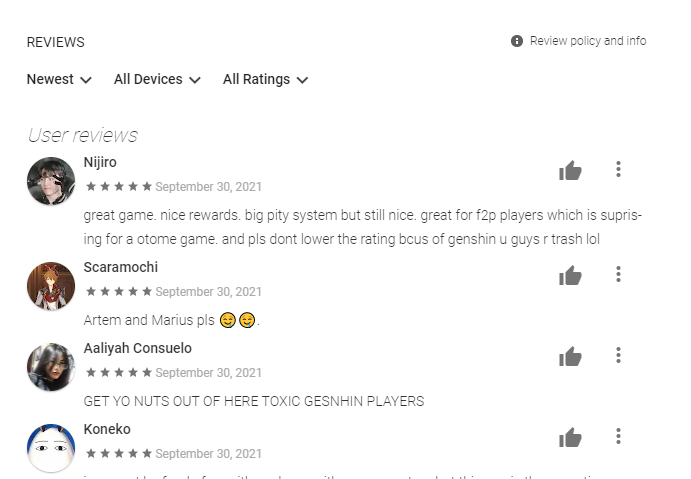 Update[30/9/2021]: even someone review-bombed Malaysia app MySejahtera just to take a shot at Genshin Impact and Mihoyo’s stinginess. 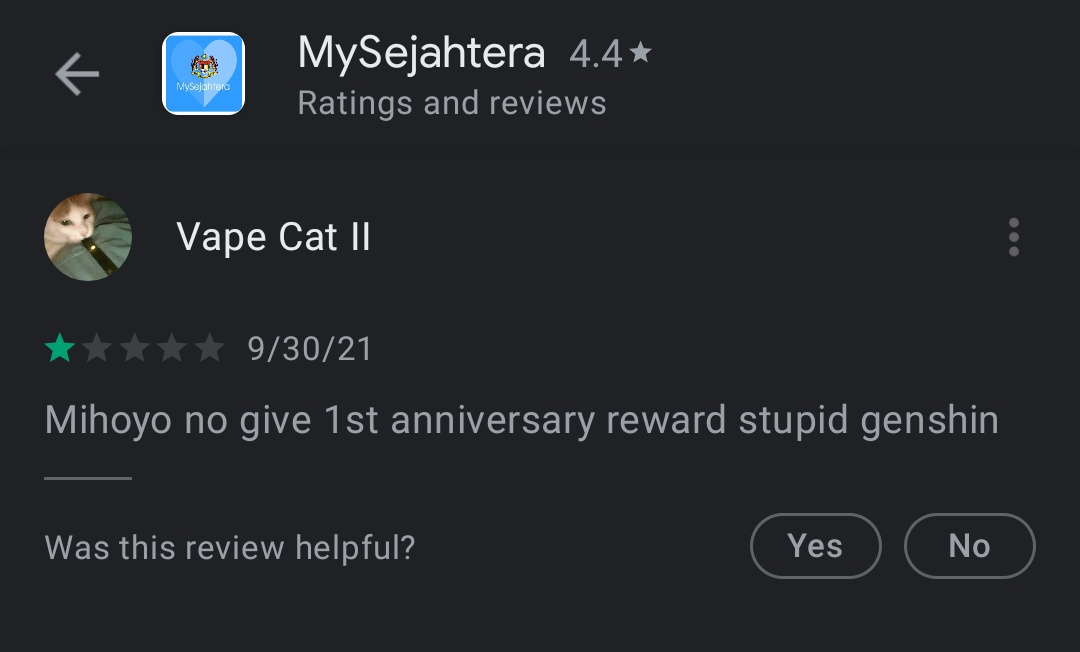 What Actually Led To This Moment?

Apart from the anniversary rewards which by comparison may be less generous than in other F2P mobile games, the deletion of threads complaining about the anniversary on the official forums also provoked players to go about their review-bombing. Prior to this, irate Genshin Impact fans went as far as to harass people unrelated to the anniversary. The English voice actor for new Genshin gacha character Kokomi tweeted about how it was unacceptable to harass voice actors for a game studio’s decisions.

I feel like I don’t necessarily have to say this to the genshin community I’ve interacted with? And it should definitely go without saying, but voice actors aren’t the character, nor are we involved in the backend development, and neither are we your outlets for any –

This was clearly referencing the harassment faced by the Chinese VO for Kokomi, to the point where she was forced to cancel a livestream.

For anyone wondering, I’ve been fine! I haven’t had any hate directed at me personally, this post was made for Gui Niang who did a PHENOMENAL job with Kokomi. She doesn’t deserve any of the hate directed to her, and for her to cancel a livestream because of the amount of hate she

News
Netflix's Sandman Has Cast Death & Some Of The Dreaming & Endless

Netflix just announced the majority of its casting for the upcoming TV series adaptation of Sandman, the incredibly popular Vertigo comics series from...

HBO's The Last Of Us has cast Gabriel Luna as Tommy, Joel's brother, in the upcoming TV series. According to Variety, the character is described as a ...