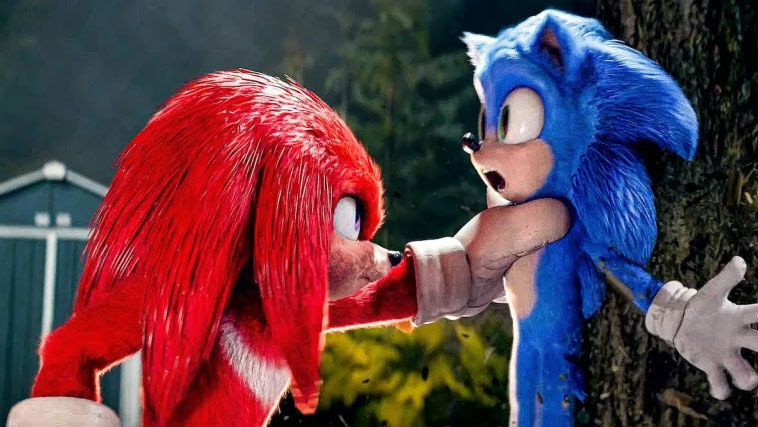 It’s not hard to improve upon the original Sonic The Hedgehog movie a few years back; you just have to add more from the video games that it was adapting from and then some. Just one look at the Sonic The Hedgehog 2 poster -the one where it’s emulating the 1992 game’s US box art- and you know it’s a film tailor-made for the 30 to 40 year olds who played the Sega Megadrive games, now all grown up and with their own children and nephews to show the wonders of the blue hedgehog to.

And at the end of the day? Sonic The Hedgehog 2 is a fine sequel that plays just fine.

Sonic 2 takes place after the hubbub of the first film. Our title character (voiced by Ben Schwartz) enjoys a time of peace while trying to fight crime, but Dr Robotnik (Jim Carrey) returns from his “portobello purgatory” with a new ally: Knuckles the Echidna. Luckily, Sonic has a new friend in the form of Tails the flying fox with two tails (Colleen O’Shaughnessey). And from there, a number of plot details from the first film like the owls and Echidna tribe to the video game bits like the Chaos Emerald make in into the literal amazing race in different parts of the world.

Yes, there are some humans in the fray like Tom Wachowski (James Marsden), Maddie (Tika Sumpter), Rachel (Natasha Rothwell), and Agent Stone the barista (Lee Majdoub). And one of them outstayed their welcome in an unnecessary scene involving a ruined wedding and Hawaii. And the obvious jokes and writing, as well as the Olive Garden and Four Seasons product placement dialogue, are still present in annoying older viewers. Despite that, Sonic 2 is still a huge improvement over its predecessor because its director Jeff Fowler and the writing/production crew just focused on the correct parts of the film.

Most of that is attributed to the action bits and the dynamic between Sonic, Tails, Knuckles, and Dr. Robotnik as heroes and villains from a video game, doing battle with each other while working together. Even with the many corny quips, Ben Schwartz’s Sonic still exudes attitude and genuine heart while the OG voice of Tails still knocks it out of the ballpark with her portrayal as meek but helpful sidekick and budding friend. And after this film, it’s really hard not to hear Knuckles without Idris Elba. He really plays off the incredibly thick-headed warrior archetype to humorous and awesome effect. Think Guardians of the Galaxy’s Drax but with that Idris Elba British touch.

Sonic The Hedgehog 2 isn’t planning on breaking the innovation sound barrier film-wise. It however entertains and succeeds over its predecessor for just being bigger and better in delivering the action, the cute CGI creatures doing their video game-like thing and Jim Carrey hamming it up further in his possibly last role. Bring the little ones to this fun ride of a film; as someone who has seen how video game movies end up worse with each passing sequel, we should be thankful that the trend is dying out with films like these.

Sonic The Hedgehog 2 will be out in Malaysian cinemas on 21st April. The film is distributed by United International Pictures.

Demon Slayer Hinokami Kepputan To Launch In English This Year

by We’re Getting A Minecraft Movie From Warner Bros. Starring Jason Momoa | KAKUCHOPUREI.COM in April 19, 2022
Reply