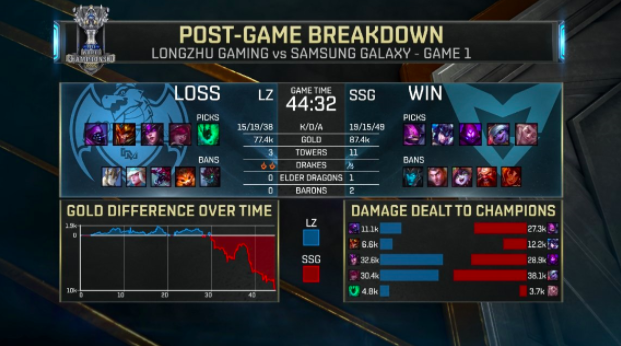 Quarterfinals are finally here! The Korean League of Legends Giants Samsung Galaxy (SSG) and Longzhu Gaming (LZ) kicked off the first day of the Worlds Quarterfinals with an epic bang. Longzhu has been by far one of the favourites to make it to the Worlds 2017 finals especially after their dominating win over the undefeated Korean League of Legends gods, SKT T1 Telekom in the LCK recently. However, that was not the case for them today as SSG beat all odds and expectations by knocking them out of the tournament with a clean 3-0 win in the best of 5.

The series ends with Crown, Samsung Galaxyâ€™s midlaner taking the title â€œPlayer of the Seriesâ€. Â Heâ€™s so far been unlucky, contributing to first bloods on both the first and second games. However, he came back gracefully from both mistakes, capitalising on amazing positioning, targeting the right players to eliminate, calculated kill setups, allowing the team breathing room with amazing zoning and finally his ability to be all over the map to split push as the team kept the enemy busy in other parts of the map. Despite Longzhu taking away or banning Crownâ€™s preferred champions, he displayed true skill on the alternative champions he chose. In addition, he carried high kill participation for all games with positive kill/death/assist rations and damage to boot. The title was definitely well deserved.

Have a look at how Crown used Taliyahâ€™s Ultimate, Weaverâ€™s Wall in game 2 to isolate the enemyâ€™s main damage dealer away from major teamfights to ensure Samsung Galaxyâ€™s victory:

Take a closer look at how Crown used the Weaver’s Wall in Samsung Galaxy’s Quarterfinals sweep against Longzhu! #Worlds2017 pic.twitter.com/7oNNrzcvat

Worlds 2017 so far has been a series of unexpected plays, metas, underdog wins. Day 2 of Quarterfinals begins later today with Royals Never Give Up (RNG) versus Fnatic (FNC) at 4 PM local time!