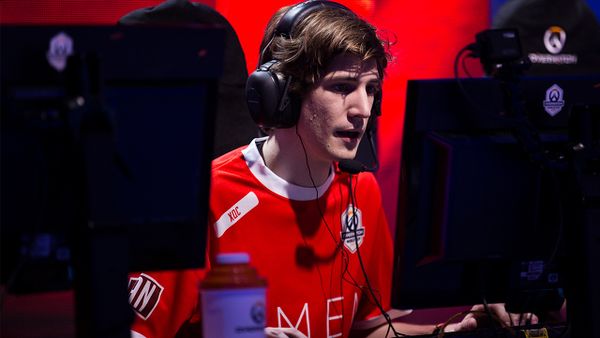 Dallas Fuel’s newest recruit and tank main FÃ©lixÂ “xQc”Â Lengyel was handed a 72-hour ban for the offence of â€œmisuse of reporting system”. A typical ‘severe’ ban is 24-hours so the 72-hours punishment is not only surprising, but in our opinion, quite hilarious. Lengyel was served the ban midway through a competitive match which he was coincidentally streaming leading to speculations of the real nature of the ban and whether it was a tad too excessive.

To those not in the know, apart from his stellar Winston plays, xQc is known within the circuit for his brash personality and at times, a recurring toxic behavior and expletive-laden outbursts as seen on his streams. He was part of the Canadian team which finished second in the recent Overwatch World Cup and also won the TMobile MVP Vote for theÂ 2017 World Cup.

In response to the ban, Lengyel tweeted:

The Overwatch League team Lengyel was signed to, Dallas Fuel responded swiftly with the following tweets:

Yesterday, @xQcOW received a 72 hour suspension on his @PlayOverwatch account. Our management is investigating the suspension and will act accordingly to assist @xQcOW and @Blizzard_Ent in correcting the situation.

After discussing the @xQcOW 3 day suspension with @overwatchleague Commissioner @natenanzer and Felix, we have decided to bypass any further punishment and hope you all accept Felix’s apology for his in game actions yesterday. #BurnBlue

A tad excessive? Or just right? TheÂ â€œmisuse of reporting system” ban came following xQc’s repeatedly reporting of a teammate, live on stream before the round even started. His supporters and detractors are of equal number following the incident and we are sure there are several layers to this drama but have a look and judge yourself:

According to Kotaku,Â  some ‘stream detectives’ pointed out that Lengyel might have had some reason behind his report; it was aÂ player from a previous gameÂ that had refused to switch off a character, even when they were repeatedly dying. Commenters to the thread later pointed out to other past clips inÂ his past stream archives of him reporting users, with captions like â€œur such a piece of shit. fuck youâ€.

This issue highlights the potential abuse and issues surrounding the report system as well as Blizzard’s stance and their approach when it comes to banning and punishing toxic players. Recently, issues arise about the perimeters and the types of behavior that could get you banned as a one-trick Torbjorn player was reportedly banned for only using one character in competitive mode – but that’s not the full story. The user, Xul was found to be griefing whenever other players picks Torbjorn before he does leading to him throwing his games and even sitting in spawn.

It also reflects on Dallas Fuel and how they handle their players moreover as we head closer into the inaugural Overwatch League season. xQc is no saint and he is notorious for his toxicity. But signing to a team such as Fuel, competing on the highest level of the sport requires him to act in a certain manner – just like how it is required from professional athletes in other sports. Alas it is still early days and we hope Blizzard comes to a solution in dealing with such issues. Also we would very much prefer to report on news about team strategies and awesome plays instead of players’ disciplines. So come on guys.

You are pros. Leave the childish behaviour behind.

Avengers Infinity War Could Have Featured This Cosmic Marvel Character

[…] He’s faced disciplinary actions prior, having been banned for throwing matches as well as abusing the report function on competitive […]

[…] He’s faced disciplinary actions prior, having been banned for throwing matches as well as abusing the report function on competitive […]