Our first highly-anticipated look at the new Super SapiensÂ reboot is here, as Lionsgate releases the first trailer for the upcoming 2019 movie. Director Neil Marshall has stated that he’s looking to differentiate the new movie from Guillermo Del Toro’s iconic take on Big Red, so let’s see what’s in the Hellboy trailer.

The Hellboy trailer begins with Ian McShane’s Trevor Bruttenholm speaking about Hellboy’s role and destiny in stopping the eternal war, as well as making a reference to Big Red’s Right Hand of Doom. And yes, that’s King Arthur’s Excalibur AKA the sword in the stone, and Hellboy will be able to lift it. Why? Big Red is a descendant of King Arthur by his mother’s side.

We then see Hellboy getting out of a truck as he gets shot by one of the good guys. He screams, “Hey! I’m on your side!” in a moment that sets the tone for the rest of the trailer: filled with action and comedy.

Ian McShane is brilliant in any role.

Hellboy accuses Bruttenholm of making him into a “damn weapon.” The next few scenes showcase the movie’s R-rating, which allows the Big Red to punch a demon to smithereens and shooting a human point-blank in the head with blood spurting out.

This scene, THIS SCENE! If you asked me what my favorite Hellboy comic is, I would answer; Hellboy: The Wild Hunt. The Osiris Club is an ancient secret organization who organizes the Wild Hunt, in which they hunt literal giants. We can see the hunt master (the one in front wearing the deer head) leading the charge with the rest of the Wild Hunt, and what seems to be Hellboy, following behind.

This wouldn’t look out of place in a Star Wars/Lord of the Rings mash-up. 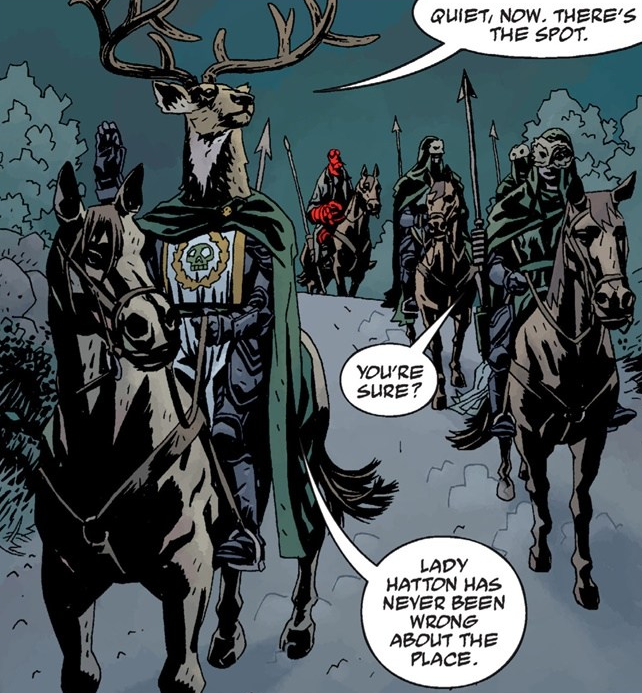 Hellboy: The Wild Hunt in the comics.

Fancy place you got here.

This could be hell or an apocalyptic vision of the world.

A literal river of fire.

In the comics, Hellboy wrestled a man-bat in Mexico. Yes, you read that right. It turned out to be one of Mignola’s most popular Hellboy short stories, and it’s a pleasant surprise to see that in the movie.

Man-Bat, is that you? 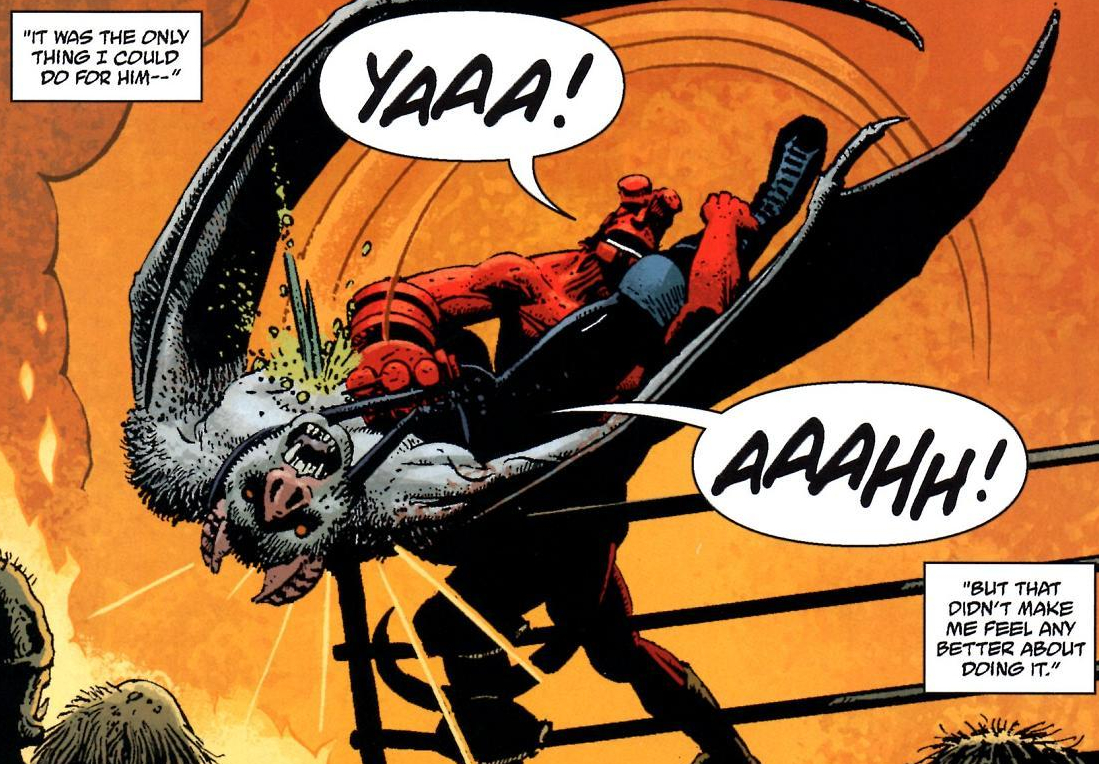 The title for the comic is ‘Hellboy in Mexico.’ I kid you not. Look it up.

This anthropomorphic boar must be the giant Grom, or the fairy Gruagach stuck in his body.

Our first look at Milla Jovovich’s Nimue or the Blood Queen, the main antagonist of the movie.

A glimpse of Rasputin summoning Hellboy from hell. This must be a brief flashback in the movie since the 2019 Hellboy movie won’t be wasting much time with retelling Big Red’s origin.

Ben Daimio doesn’t like working with Hellboy. For those unfamiliar with the character, he turns into a were-jaguar when angered or in pain. It certainly seems like we’ll be seeing that happening sooner than later. 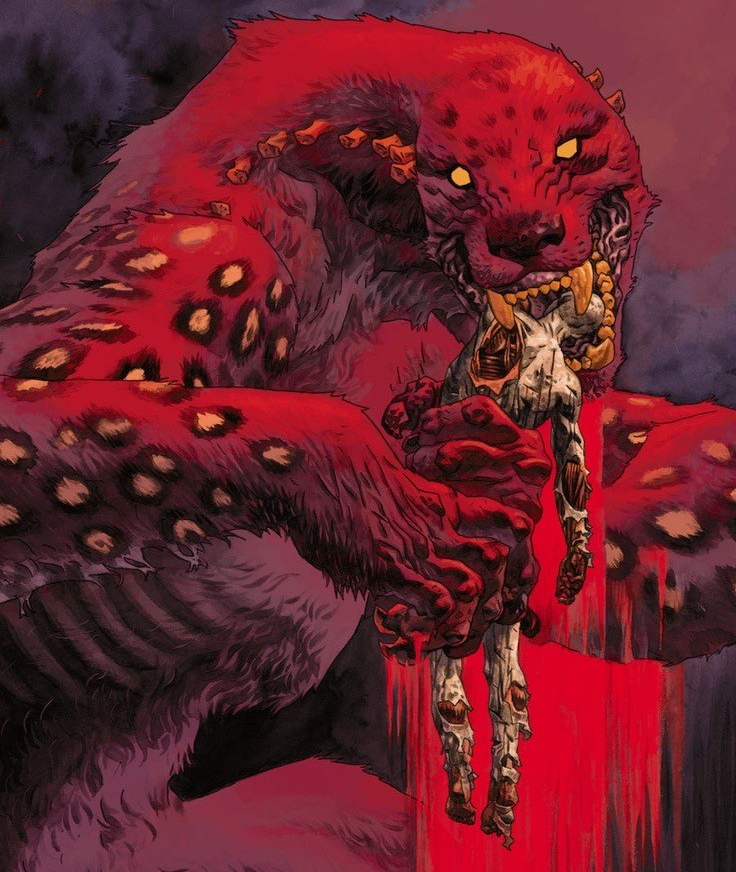 Nimue readies her army to war against the human world…

But not if Hellboy has anything to say about that. I give you Hellboy AKA Anung Un Rama (which means “and upon his brow is set a crown of flame”) AKA Beast of the Apocalypse in all his hellish glory, horns and all.

There’s so much to dissect in this trailer that it’s pretty overwhelming. What I can say about the 2019 Hellboy movie so far is that it definitely seems to be a much more faithful and accurate adaptation of Mike Mignola’s comics. The visuals also look great considering it’s supposed to be a lower-budgeted affair instead of a summer blockbuster.

Neil Marshall is ripping off pages straight from the comics and for that, I hereby declare that 2019’s Hellboy is my most anticipated comic book movie next to Avengers: Endgame. Mike Mignola’s Hellboy is one of the best comic books out there, and it deserves to be in the spotlight as much as Marvel and DC.

While many might find Captain America's suit in 2012's The Avengers to be too cheesy or cringy, it's actually the most faithful to the character's cla...

Feature
Mobile Gaming and the Creativity of the Industry

I was stuck again in one of those boring work meetings at 9 in the morning and thankfully, we were given a 20-minute break before I hit my face on the...

Feature
Why Pro Evolution Soccer 2018 May Be the New King of the Hill Of Football Sims:

Ah hello football season. We missed you much. Weekends now have a meaning again. If thereâ€™s a topic more heatedly discussed on around this peri...