Trust Koei Tecmo and Team Ninja to pull a bait-and-switch on the Western media. Just when they’re about to change their ways with a dressed-up Kasumi with dirt on her face, they basically went back to their old ways with the game’s improved “natural motion” and DLC costumes that leave little to the polygonal imagination. Hope it was worth it, especially since their recent stunt may not earn them a main stage presence in this year’s EVO (and future ones too).

This wouldn’t be so much of an issue if the game was leaps and bounds from part 5, which had a solid tweak in its fighting and guest characters like Mai from King of Fighters and Sarah from Virtua Fighter. DOA 6 kinda has some noteworthy changes in its super-fast counter-heavy 3D fighting gameplay, specifically its 4-way hold system which opens up lots of ways to counter specific moves. However, the core game still retains what made it popular in the first place, and that means little changes to an already-established framework.

Kudos to Team Ninja for making this one of the friendlier fighting game titles to pick up for this year. The game is accessible thanks to its 5-button system (Punch, Kick, Throw, Hold/Parry, and Special; that’s it). It’s also aesthetically flashy with its physics, sweat and dirt detail, and the rest of its glossy aesthetics. At the same time, the destructible environments and extra stage transitions (leading to big damage inflicted to the poor opponent) are still prevalent and makes the spectacle all the more pleasing to the eyes.

However, it isn’t as all-out as how Dead or Alive 2, 3, and 4 were in terms of upping the scale and showcasing awesome skin/body/ragdoll tech. The sex appeal and jiggle is there for long-time fans, but it’s hidden under a wave of grinding needed for costume-unlocking. When you play this from the get-go, you have mainstays like Kasumi and Leifang in their pretty decent and practical-for-fighting clothes.

Talk about making a great first impression; it’s like bringing a seemingly nice neighbourhood girl to your parents before they find out a few years later that she’s a renowned gravure idol veteran. 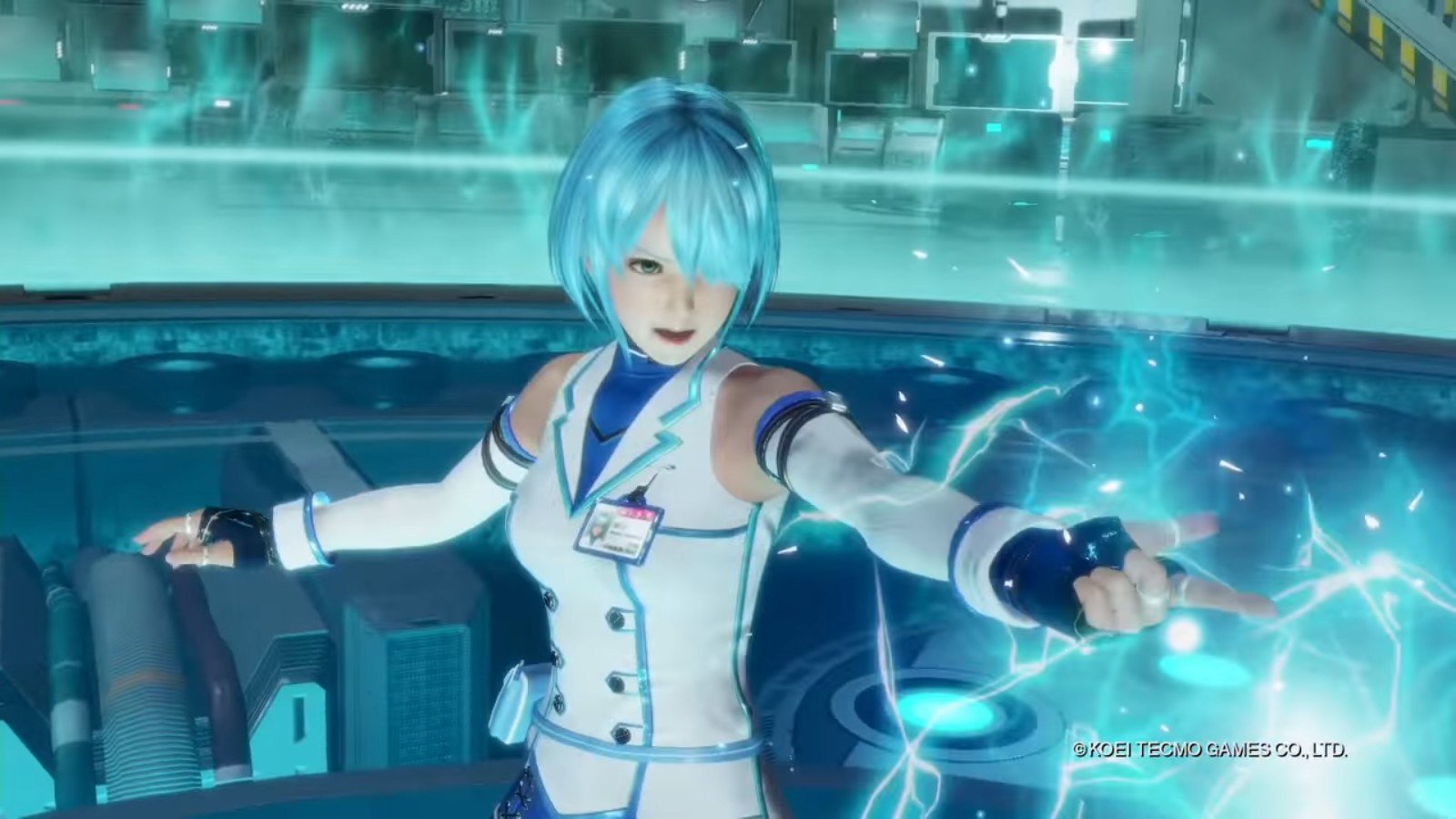 DOA 6’s new character additions are led by a standout: the blue-haired NiCO. She’s an evil scientist hammed up to perfection and she’d damn well twirl a moustache if she had one. She has sparks coming out of her hands to shock opponents, has graceful Pencak Silat moves that are tricky to counter when up-close, and has that great mix of arrogance and cold-heartedness that doesn’t reflect her loli blue-haired Hatsune Miku-esque look. In short, she’s going to be a mainstay in the series and its volleyball-focused spin-off, I guaran-damn-tee it.

Nobody cares aboutÂ  newcomer Mexican-American Diego. Or Raidou; I didn’t know the latter was the last boss in the first game until DOA6 brought it up. I’m sure they’ll see tournament play, but they’re MvC Infinite functions instead ofÂ  actual characters players can hang onto.

In fact, there are DoA 5 leftovers like Marie Rose and Honoka who are just shoved into the absurd DoA plot in a lazy fashion. To their credit, they play pretty well. Marie Rose doesn’t have range but she hits hard for a short girl. I’ll also give Honoka some props: she steals different trademark moves from the roster from Hitomi’s karate punch combos to La Mariposa’s capoeira low-hitting kicks. She’s like the DOA equivalent of SFIV’s Seth in a guise of a miniskirt high school fetish.

And Nyotengu, the outsider bird tengu princess who contribute to the funny “what-the-hell” bits in the game’s story,Â  is a DLC character; for shame. Speaking of which, I do like the initiative Team Ninja is doing in fleshing out these anime Penthouse pin-up models with their segments in Story Mode.

You have the aforementioned Marie Rose teaming up with Honoka who ends up being integral to the story, and the DOA tournament bringing other side characters like cardboard-personality Diego and equally-interesting Mila together in short-but-sweet segments that do not wear out their welcome.

I had fun watching these non sequitur side bits; for the first time since forever, these characters have something resembling a personality. It’s not going top Mortal Kombat 9 by a long shot, but props to Team Ninja for trying. 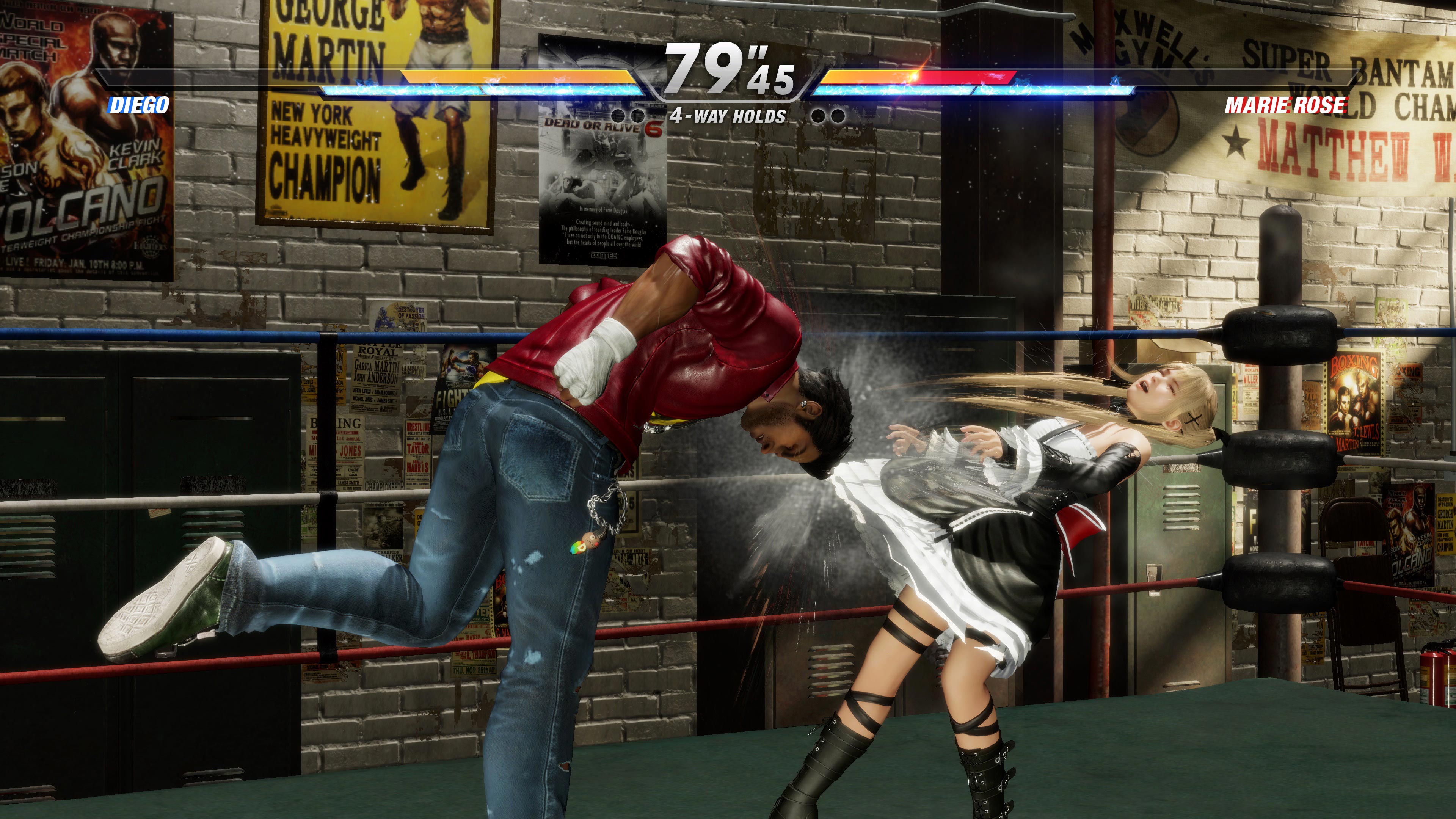 And then there’s the US$93 Season Pass filled with garbs of clothes and outfits to sucker people into buying them. That’s a demerit since it’s Koei Tecmo and fighting game companies as a whole waving their lure at fighting game fans to spend money just for possible outfits and fewer characters who should have been in the main roster. It’s like your Tekken 7 and SoulCalibur 6 passes but multiplied four friggin’ times.

Let’s Get It On

The only reason I’m still sticking around DOA 6 apart from the game being mildly fun for couch sessions with buddies is because of the oodles of things you can unlock. You can do this with DOA Quest. Part grinding and part tutorial, DOA Quest lets you play through different characters to complete different objectives like finishing a survival mode round while getting in throws or a combo that deals X amount of damage.

If you finish part of it, you don’t get extra rewards. If you can’t figure out how to complete bits of a mission, there’s a handy tutorial you can access with the Triangle button. In fact, you can just go straight to the in-depth tutorial that should be the norm for all 3D fighting games.

In a way, DOA Quest taught me the ins and outs of the game from Offensive Holds to Expert Holds to juggling after using certain counterattacks. Oh, and figuring out when’s the best time to pull off mid and low holds/parries.

And all it needed was entice me with a bunch of rewards just for learning: extra garbs and clothing for the cast to mix and match with.

Of course, if you get the clothes points from 3-starring your missions, they’re distributed randomly to a character. This can be a huge pain if you only like certain characters like Hitomi or Leifang; you can’t direct all your clothing points to one person; it’s all arbitrary. So if you really want that blue Kasumi robe, you’ll have to pray to the random generator gods for your spoils. Compared to the past DOA games where unlocking specific gear is just a matter of playing your favourite character well in trials and other modes, this is a huge, huge disappointment. 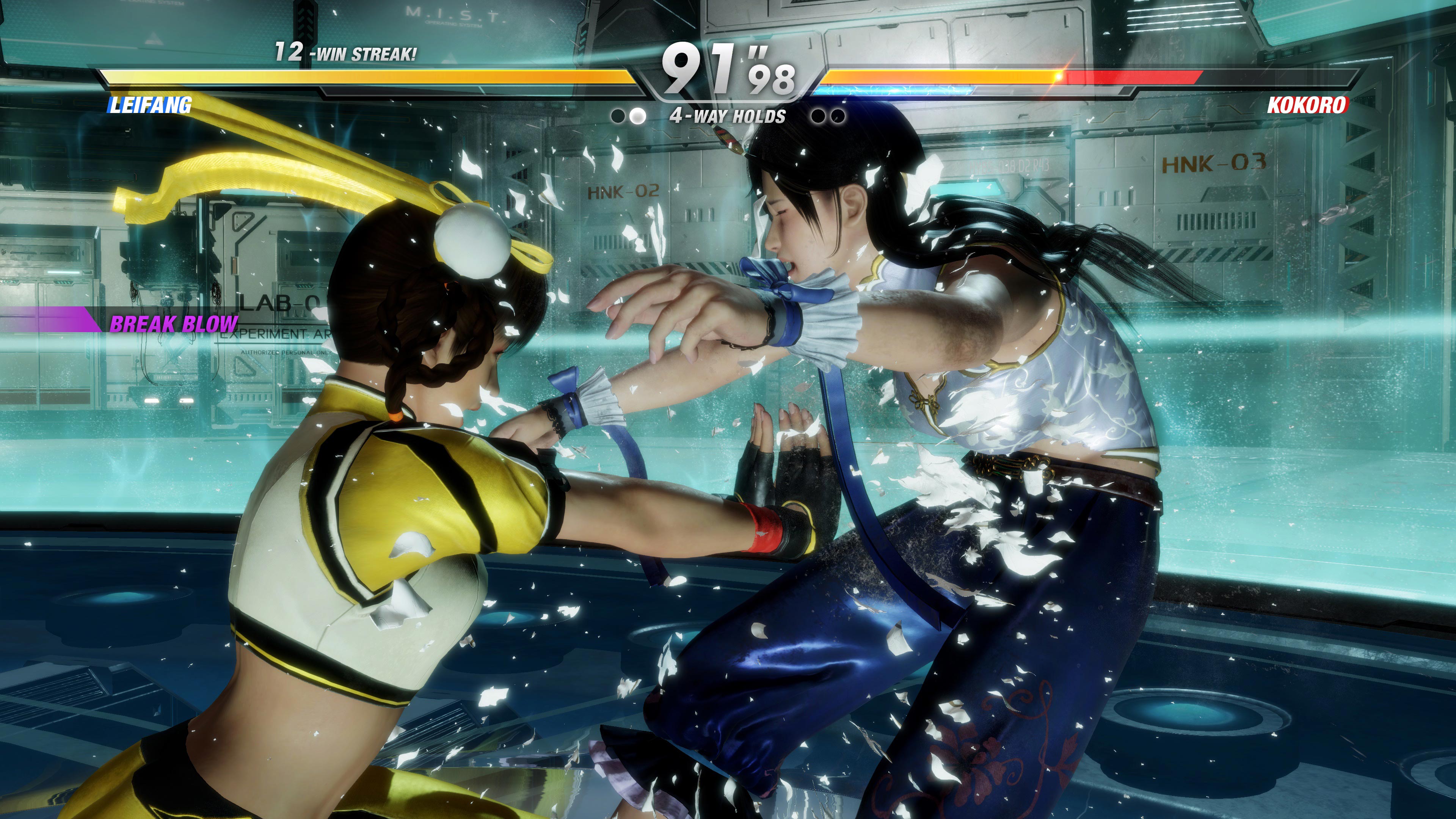 As for online mode, there’s only Ranked Play for now. It works fine and dandy if you’re feeling competitive. But why no lobby-making options, Koei Tecmo? Some of us want to play with a bunch of friends in a character selection-savvy environment for s***s and giggles.

Also, what the hell happened to tag team mode? What was in past DOA games is strangely absent here. Don’t tell us this is going to be part of the next US$100 season pass; that would be utter horses*** if that happens.

DOA6 is a fun game, but it’s not really a huge leap from part 5, and it still needs more functions & fan-favourite modes to stand out from other fighting games even from last year. As much fun as it is to kick ass as either Hitomi or that schoolgirl with the multiple moves, the absurd Story Mode isn’t enough to pique my interest for more than a few weeks. Heck, the new DOA Quest mode can be a bit much for fans who want everything unlocked from the get-go or at least from a few hours of play.

At the very least, it’s an easy fighting game for people to pick up and thanks to the characters wearing sensible garbs from the get-go (until you start unlocking the risque ones), you don’t have to feel ashamed playing this with people around.

Okay, maybe you should turn off the “natural motion” for the female characters first. But other than that, it’s good clean PG-fighting fun. 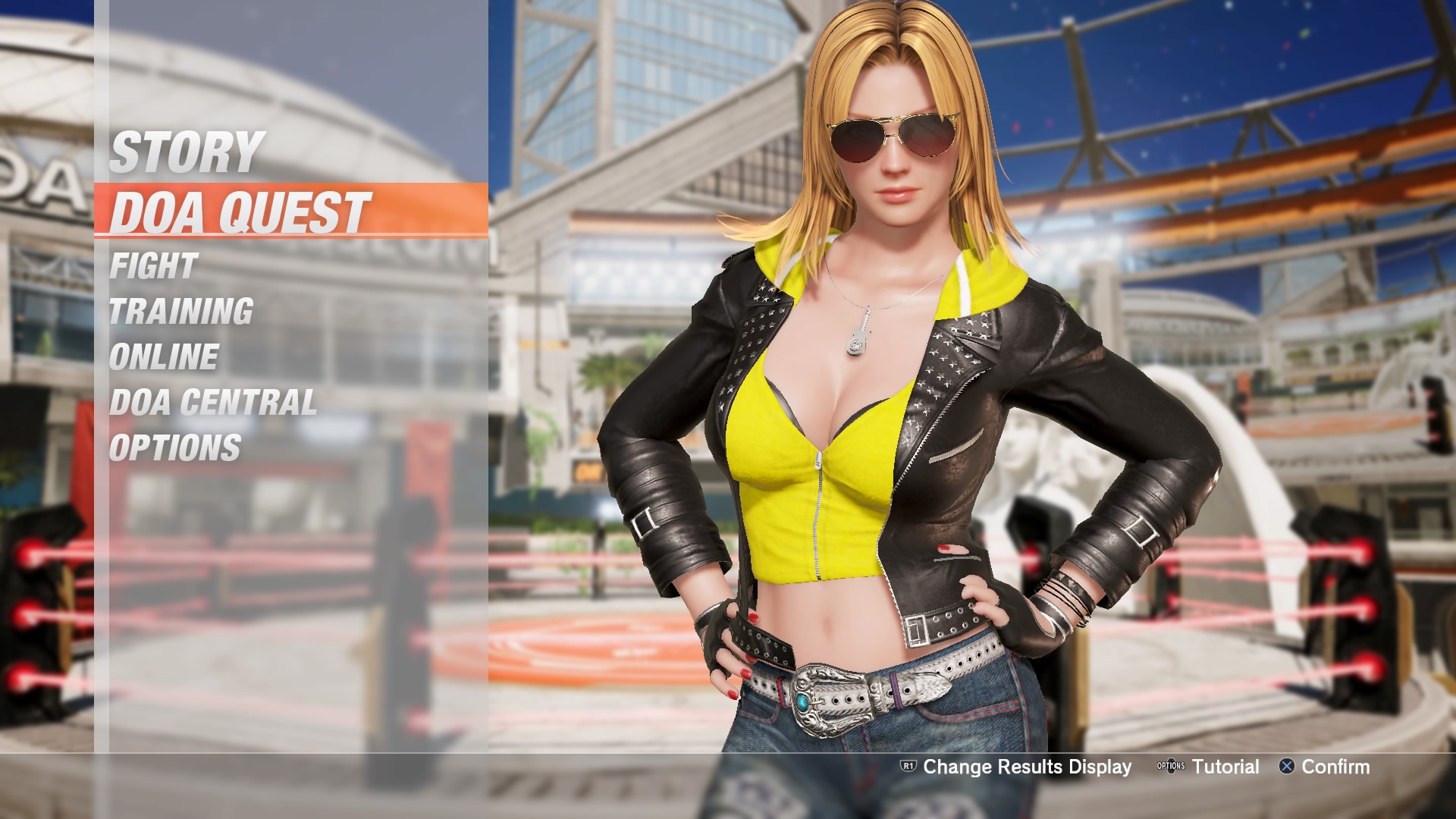 Platform(s): PS4 (version played), Xbox One, PC, Nintendo Switch Genre: 3D Sonic Game Like most embittered Sonic fans, I myself have a love and ha...

News
Everything We Know About Assassin's Creed Valhalla So Far

Ubisoft has unveiled the world premiere of the first trailer for the upcoming Assassin's Creed Valhalla. The four-minute cinematic trailer pretty much...

Reviews
5 Reasons Why The Latest Yakuza Sequel Is Sorta Fun

Platform: PS4 Genre: Action Adventure, Japanese Drama, Thug Life The swan song to Kiryu Kazuma's escapades is now out in English, but is it worth pur...