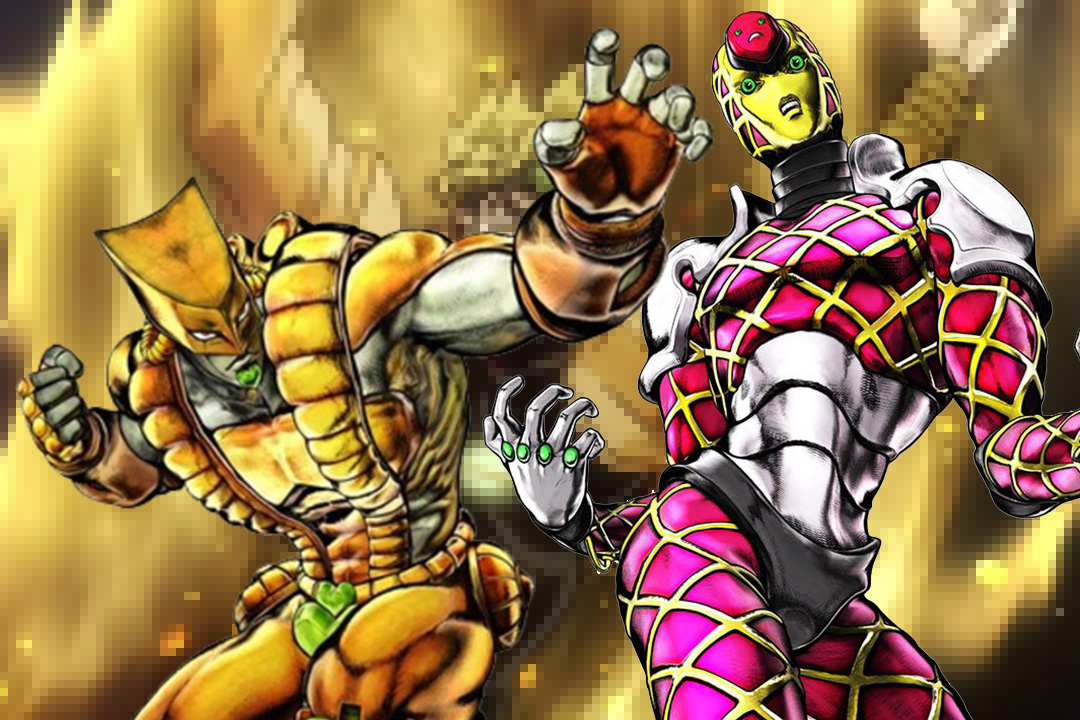 Throughout most of the story, the Bucciarati gang have been determined to deliver a young girl named Trish to her father, known only as the enigmatic Boss. Itâ€™s a dangerous mission, with our heroes gambling life and limb through a gauntlet of deadly Stand users to get the job done.

However, what appears to be an end to their mission soon takes a turn for the worse. They find out that the only reason the Boss asked for his daughter was so that he could kill her, all to conceal his identity.

With this newfound knowledge, Bruno Bucciarati attempts to rescue her, but his Sticky Fingers is no match for the massive revelation that the Bossâ€™ Stand, King Crimson, has a menacing control over time.

For many JoJo fans, King Crimsonâ€™s ability may sound similar to an older main villain from JoJo Part 3. Dio Brando was a vampire that possessed a Stand called The World, which could stop time for several â€˜secondsâ€™ (it just works) and also allowed him to move within that stopped time. In practice, this resembles King Crimsonâ€™s ability to ‘erase time’, with some differences in execution.

Considering that these Stands both have time-altering powers, some people may wonder how they would fare against each other in your typical battle. Dio’s The World has often been considered the strongest Stand to ever exist, but could King Crimson have an edge with how differently it affects time?

Before we get into the thick of things, let’s recap on some of King Crimson’s powers. Even if youâ€™ve seen the Stand in action, you might find yourself still clueless about how it all works, as many of the series’ fans have admitted through various jokes and memes.

The Boss’ first introduction in Part 5 tries to explain this simply. Basically, for a period up to 10 seconds his stand, King Crimson, can â€˜erase timeâ€™. From when he activates his ability, everyone around him will go through with any actions they would normally perform in those 10 seconds.

But the Boss and King Crimson themselves are not affected and can control their actions as they see fit. At the end of those 10 seconds, King Crimson removes a portion of that time, leaving those affected with no recollection of what they had done in that time period.

If this still sounds like a bunch of hocus pocus to you, an easier analogy to describe this ability would be lag in an online video game.

Imagine that youâ€™re playing your favourite FPS game on multiplayer and suddenly run into a human opponent. You act accordingly by shooting at him and then maybe jumping around to evade his gunfire, but suddenly the gameplay quickly cuts forward and you find yourself dead on the floor.

What just happened? Now imagine that same lag lasting for up to 10 seconds and you have yourself a nasty Stand called King Crimson.

But it doesnâ€™t stop there. Besides â€˜time erasureâ€™, King Crimson has the power to â€˜forecastâ€™ the future with the help of his â€˜Epitaphâ€™ (itâ€™s the tiny-looking face on its forehead).

This allows him to predict any events that would happen in his vicinity for as far as 10 seconds. In other words, you canâ€™t catch him off guard and chances are heâ€™ll activate his ability long before you can even think of stopping him.

With that being done, letâ€™s start talking about The World. Like King Crimson, it represents a rare Stand in the JoJo series with control over time, but the explanation for its ability is much more straightforward (thankfully).

As signaled by Dioâ€™s iconic scream, “ZA WARUDO!” his Stand will cause everyone and everything but himself to freeze, essentially bringing time to a standstill. This normally lasts for five seconds, but Dio eventually refines this ability up to nine seconds after he completely heals his weakened body.

While King Crimson cannot interact with humans until after his ability has ended, The World is perfectly fine with walking right up to you within stopped time and punching a big fat hole in your chest.

Both Dio and The World can also use objects such as knives and throw them to create momentum for when time resumes, among other things.

And thatâ€™s pretty much it. Although explaining The Worldâ€™s powers isn’t so complicated, that doesnâ€™t necessarily mean that King Crimson has the edge. Being able to stop time is quite a scary ability in its own right, after all.

King Crimson vs The World

Now that we have a rough understanding of both of these Standsâ€™ abilities, letâ€™s pit them against each other.

To summarise, King Crimson can:

Letâ€™s assume for a moment that The World stops time and goes in for the kill. You would think that this is where the Boss loses to Dio in an instant. However, King Crimson isnâ€™t like most normal Stands.

Thanks to his foresight, King Crimson will always be able to predict the instance when The World stops time to attack. Visually, this would appear as him getting pummelled within a split second, but thatâ€™s really all the information the Stand needs.

All it takes for King Crimson to beat this ability out is to erase the time period when The World activates its time stop. Like our previous analogy, Dio would experience some severe lag that would cause him to activate The World without even realising that King Crimson is no longer there.

With this in mind, you could say that King Crimson has the upper hand and would probably catch The World off guard quite often. The big problem, however, is that the owner of The World is himself an immortal vampire.

This means that it’ll take more than a few cheap hits for King Crimson to inch out a win, even if it has shown itself capable of ploughing through body parts.

More importantly, revealing himself so closely to Dio would also put himself in immediate danger when King Crimson is just recovering from its ability. With The World boasting supreme power and precision, and Dio being a superhuman himself, whoâ€™s to say that thereâ€™s no room for an immediate retaliation based purely on reflexes?

And let’s not forget that The World’s time stopping abilities can continuously grow over time, whereas King Crimson’s own powers remain stagnant. It would only be a matter of time until The World would manage to activate its time stop outside of King Crimson’s Epitaph range, with enough time to close the distance, rendering even its foresight powers useless.

So how does a relatively normal person like the Boss take down Dio? Despite being able to nullify The Worldâ€™s time stop, it seems pretty likely that King Crimson would still lose in the war of attrition.

However, vampires are weak to sunlight, and if King Crimson has shown anything, itâ€™s that it can still interact with stationary objects within erased time. With Dio being completely unaware of his next 10 seconds once King Crimson acts, victory could be as easy as drawing a curtain open on a sunny Tuesday morning.

Our conclusion on the best Stand in a fight? It depends on the circumstances but barring any extreme conditions, The World definitely wins out.

It most certainly has the upper hand in terms of raw power and durability, even without being able to use its time stop ability as effectively.

Although King Crimson has the element of surprise at all times, it has to keep up with a Stand user who himself is a force to be reckoned with, leaving fewer options on the table for a sure-fire victory.