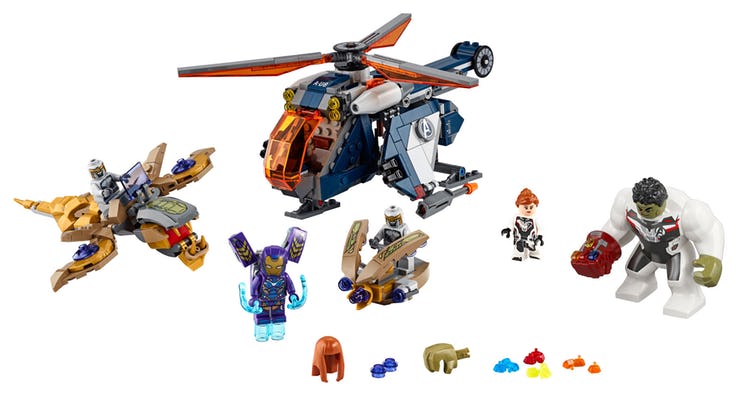 We’re less than a month away from San Diego Comic-Con International 2019, and some goodies are already coming out of the work. Lego has announced (via CBR) a new exclusive Avengers Endgame Lego set that will be making its debut at the event.

The Avengers Hulk Helicopter Drop Lego set very (very) loosely adapts the events of the climactic final battle in Avengers Endgame when our heroes face off against Thanos and his Chitauri army. However, it features several weird choices, including Black Widow in her Time Heist suit (even though she was already dead by then).

There’s also no Iron Man, Thor, Captain America, or Thanos himself. Instead, you’ll be getting two Chitauri with their gliders, Pepper Potts in her Rescue armor, and Hulk in his Time Heist suit wielding the Infinity Gauntlet (who also wasn’t in the final battle in that exact form).

The set contains 482 individual pieces and will be sold for US$59.99. However, while it’s debuting at SDCC, it won’t be available for purchase until 25 November 2019.

Check out the Avengers Hulk Helicopter Drop Lego set below.