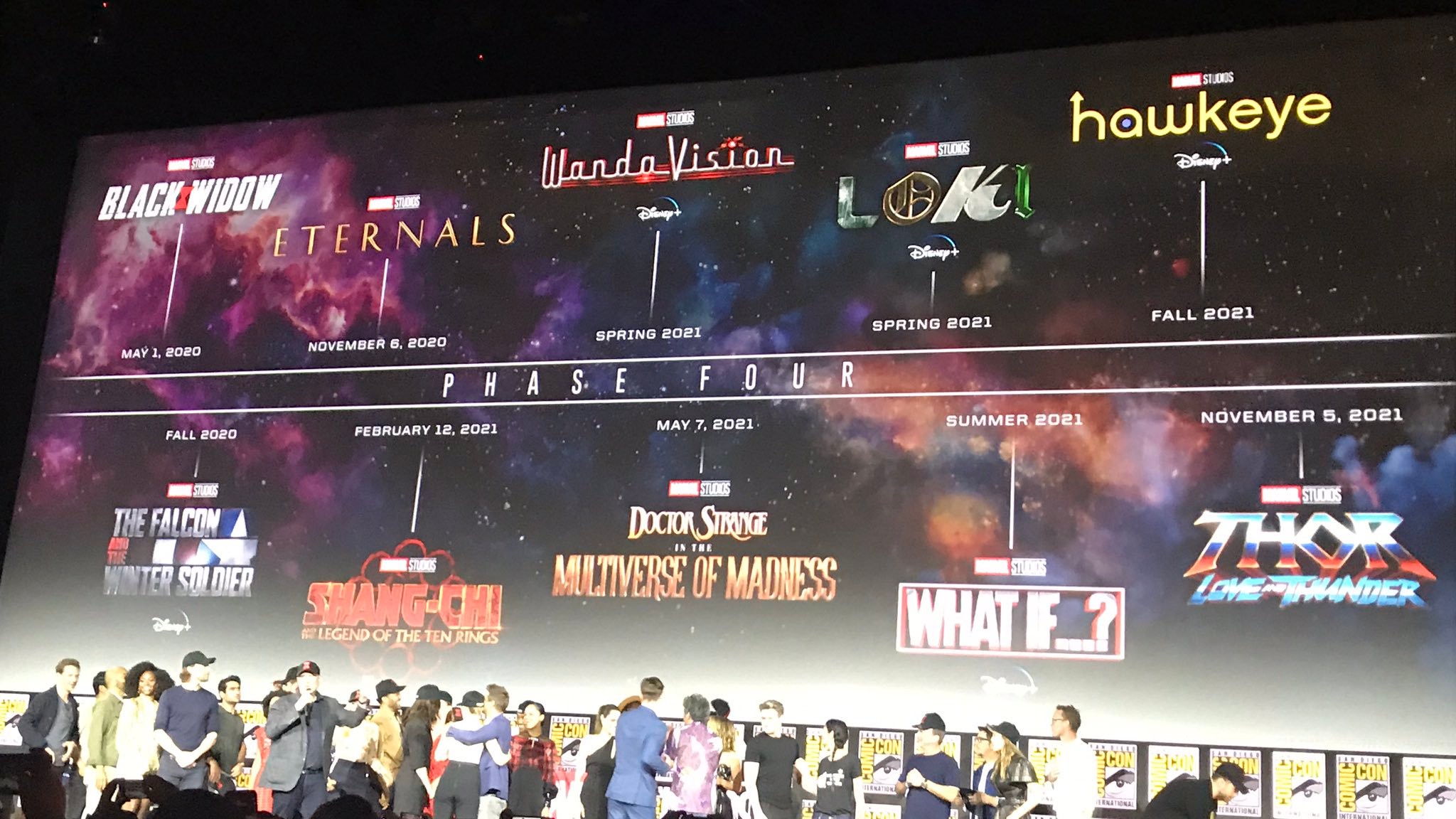 During their Hall H panel at San Diego Comic-Con 2019, Marvel Studios has finally revealed their official Marvel Cinematic Universe (MCU) Phase Four slate. Many of these movies are the same ones I’ve previously mentioned in my other article.

The MCU Phase Four plans (which covers a two-year period from 2020 to 2021) consists of five movies and five TV series, the latter of which will exclusively be streamed on the Disney Plus streaming service slated to launch later this year.

Directed by Cate Shortland, Black Widow will star Scarlett Johansson reprising her role as the Natasha Romanoff, David Harbour as Alexei AKA The Red Guardian (the Soviet Union’s equivalent of Captain America), Florence Pugh as Yelena Belova (the second character to use the Black Widow name in the comics), and Rachel Weisz as Melina.

The assassin Avenger will face Taskmaster as the main villain, with the movie set between the events of Captain America: Civil War and Avengers: Infinity War, which means this will all be happening before her death.

The Falcon And The Winter Soldier (Fall 2020)

Set to be the first exclusive show on Disney Plus, The Falcon And The Winter Soldier stars Anthony Mackie (The Falcon) and Sebastian Stan (The Winter Soldier), with Daniel Bruhl reprising his role as Baron Zemo, the villain from 2016’s Captain America Civil War.

In the comics, The Eternals were created by the late legend Jack Kirby in 1976. A race of space gods called the Celestials arrived on Earth millennia ago and created two offshoots of humanity: the Eternals and the Deviants. Therefore, the Eternals can best be described as what ancient humans would call â€˜godsâ€™, or you can just imagine them to be â€˜godsâ€™ in the way that Marvelâ€™s Asgardians are â€˜godsâ€™.

What makes this movie exciting is that it will probably explore even more of the MCUâ€™s cosmic side. In the comics, Thanos himself is a member of the Deviants, and his parents and brother were members of the Eternals. It remains to be seen if the MCU will be going the same route.

Directed by Destin Daniel Cretton, Shang-Chi And The Legend Of The Ten Rings will star Simu Liu in the title role, Awkwafina in an undisclosed role and Tony Leung as the (real) Mandarin (not the imposter Alrich Killian from 2013’s Iron Man 3).

WandaVision will star Elizabeth Olsen and Paul Bettany as Wanda Maximoff/Scarlet Witch and Vision, respectively, while Teyonah Parris will be playing the adult version of Monica Rambeau (who was first introduced as a child in 2019’s Captain Marvel).

We still have no clue as to how the Vision will be brought back to life or just in flashbacks, but this Disney Plus series is confirmed to take place post-Avengers Endgame. Wanda will be dealing with the loss of her partner, and that may mean a House of M event on the horizon.

Doctor Strange And The Multiverse Of Madness (7 May 2021)

Directed by the returning Scott Derrickson, Doctor Strange And The Multiverse Of Madness will star Benedict Cumberbatch as Stephen Strange, who will be joined by Elizabeth Olsen’s Scarlet Witch.

The events of this movie will spin directly from the WandaVision, which marks the first time that an MCU movie will be truly connected with a TV series and vice versa. With the sorcerers no longer having access to their greatest weapon, the Eye of Agamotto AKA the Time Stone, the MCU will be more vulnerable to magical and interdimensional threats than ever, not to mention the looming threat of Mordo whoâ€™s looking to exterminate all sorcerers.

Loki will star none other than Tom Hiddlestone reprising his role as the Norse Trickster God. However, since he technically died in 2018’s Avengers Infinity War, this Disney Plus series will feature the 2012 version of Loki, who managed to escape with the help of the Tesseract AKA the Space Stone.

The popular What If…? comics will be adapted into an animated series for Disney Plus, starring Jeffrey Wright as the voice of The Watcher as well as many MCU actors reprising their roles as their iconic counterparts.

One of these alternate-world stories will reportedly feature Peggy Carter taking the mantle of Captain America after Steve Rogers’ death.

Hawkeye will star Jeremey Renner as Clint Barton AKA Hawkeye in this Disney Plus series, alongside Kate Bishop who will be the expert archer’s protege. Since the font is clearly inspired by the one used for Matt Fraction and David Aja’s Eisner-award-winning comic book of the same name, perhaps the series will be adapting stories from it too.

Directed by Taika Waititi, Thor: Love and Thunder will star Chris Hemsworth and Tessa Thompson as Thor and Valkyrie, with Natalie Portman set to reprise her role as Jane Foster. More surprisingly, Jane is set to become the next Thor and wielder of Mjolnir, just like what happened in the comics written by Jason Aaron.

The Daywalker will be making his debut in the MCU, as Marvel Studios announces Mahershala Ali as the next Blade. However, no details have been revealed as to when it will be released, though it will likely be after Thor: Love And Thunder in November 2021.