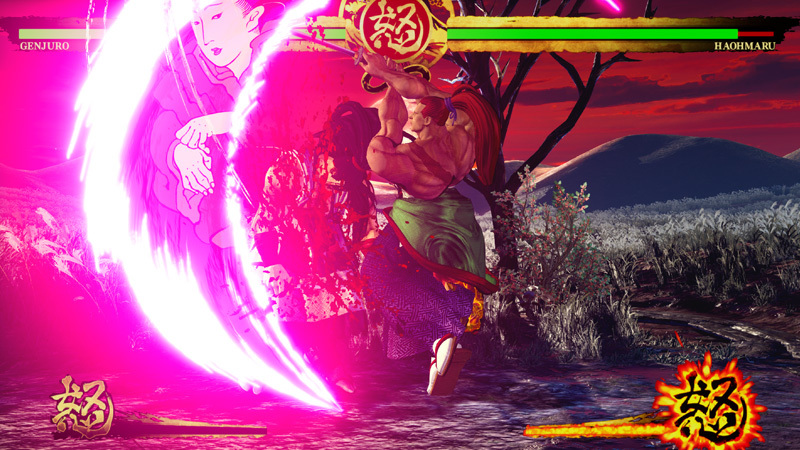 As with any game starting out its esports journey, you can’t help but feel skeptical for a competitive title you love even if it’s the best thing out there. I feel the same way with the 2019 iteration of Samurai Shodown.

Sure, its single-player features are basic, but its core fighting mechanic is simple-yet-satisfying, rewarding players with swift & quick wins with well-timed counters and big damage. The game’s aesthetics and “simplified” inputs help matters too.

So What’s The Problem?

With all of that, you would think that having main stage presence at EVO 2019, arguably the biggest fighting game tournament on the planet, would cement the game for further recognition for months and years to come. That may not be the case if the top 8 of the tournament looks like this tweet:

As you can tell, your top 8 is filled up mostly with one character: Genjuro. As it stands, he’s a top-tier character with a set of great moves, mixups, and decent damage output for a guy of his stature. Sure, other characters like Yoshitora, Haohmaru, Tam Tam, Galford, and Charlotte are also on the list, but you can’t deny the prevalence of the red-haired samurai being exploited by top players.

Compared to other titles like Tekken and Street Fighter, Samurai Shodown is not as recognizable to the mainstream audience. If the top 8 for EVO 2019 is filled with mirror matches of Genjuro, people will get bored of it. Professionals and commentators will also bring up the lack of balance in the fighting game.

What Can Be Done?

SNK will need to release major updates in the near future to make the roster more balanced for one. Since it’s too late to do any major tournament updates leading to EVO, this is the best they can do. Colour commentary can help in hyping up the game and its methodical-yet-tense pacing. If we have an expert from the SSV Special side of things paired up with an FGC all-rounder commentator like James Chen, we can get a mix of insight and hype in the grand finals.

Of course, let’s also factor in that EVO 2019 will be attended by every single pro player on the planet. That means Samurai Shodown will have a slew of Japanese, Korean, European, and American players who have studied and played through the roster while sticking to their mains. At this point in time, players should be accustomed to the game’s plethora of defence options like parries, dodging, and even weapon-catching if they’re unarmed.

Compared to other fighting game titles, Samurai Shodown lets you take huge risks for huge rewards if you know how to read your opponent. The best players will show viewers what a high-level 2D weapons-based fighting game is like; footsies-oriented, well-timed blows and blocks, and quick turnarounds and comebacks.

Yes, we will still be seeing high-level Genjuro players, but at least pros like Justin Wong and Momochi will make the top 8 fights varied and colourful with Tam Tam’s horses*** spacing and Galford’s dog-and-ninja cross-up shenanigans respectively. So all hope is not lost.

I’m truly excited to see Samurai Shodown taking the main stage in EVO 2019; I really am. But SNK’s latest is stacked against other heavyweights with proven legacies and is a title fresh out of the water. Let’s hope we get to see more footsies and a diverse set of playstyles instead of a top 8 filled with random Houyoku Jins and Hanafuda card projectiles.

The Winners Of The SEA Games 2019 Esports Tournament