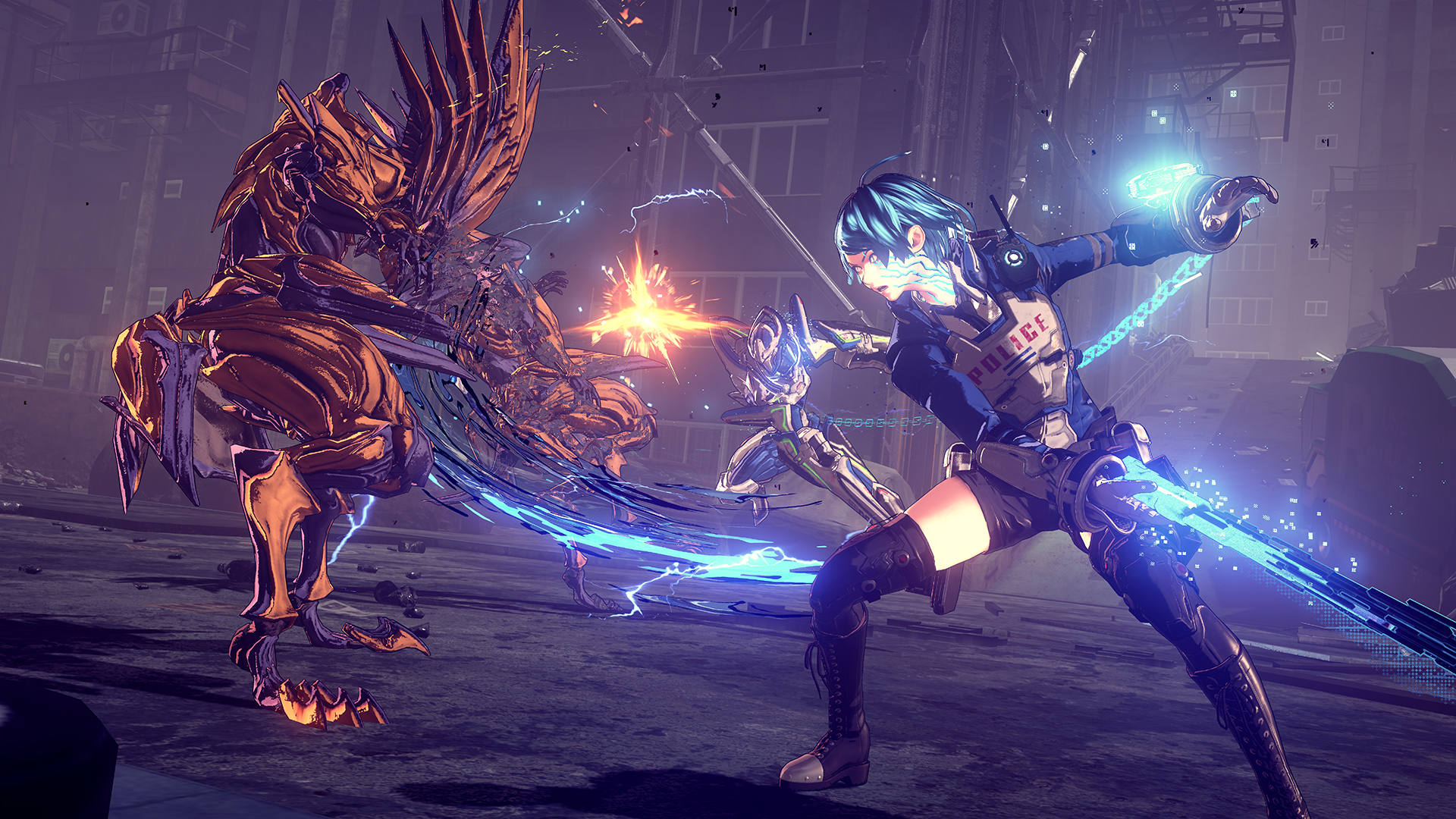 Nier Automata game director Yoko Taro said this a while back during a particular Game Developer Conference panel about his Square Enix masterpiece: “Modern games, they’re made really well. They have so much love and time put into making them expansive and great. But once you played most of them for 30 minutes, you get an idea what they’re like right to the end, and that’s a bit boring”.

This one particular quote seems to ring true with Taro’s partner-in-crime game designer Taura Takahisa, who happens to be directing the recently-out and sold-out-all-over-Kuala-Lumpur Astral Chain. Why? Because in just an hour or so, you’re not only beating the bejeesus out of monsters called chimeras in a futuristic sci-fi city called The Ark protecting and serving as the city’s finest, but also helping people out and solving crimes.

And you’ll have a damn good time doing all this for the game’s 20-hour or less runtime.

Your main character is one of the two twins who joins the special Neuron division in the Ark’s police force, designated to combat outer-worldly threats like the chimeras. After you picked your favourite twin -male or female- the other twin ends up as your “voice” and establisher of context.

They’re special because they can control Legions, a type of creature-weapon hybrid that helps you fight crime and chimeras, as well as solve puzzles for you. They’re on a leash called the, you guessed it, Astral Chain, which means they’re basically tamed chimeras in the universe. We’ll get to that narrative tangent later because I want to talk about the awesome gameplay implementation of these blue-floating monster-like fellows.

You get access to all five of them as the story progresses: Sword, Arrow, Arm, Beast, and Axe. You can take a guess at what some of them do: one’s good at slicing things up Zandatsu-style while the other can be used as a floating armour type thing that lets you navigate treacherous terrain. Your Beast Legion can not only give you a lift to get to places quicker -or just run away really, REALLY fast- it can also “sniff” and track marks for you and even dig for treasure.

You can manually command them by pressing and holding ZL while moving your right analog stick, but most of the time they’ll be AI-driven. For the most parts, they’re smart and they usually will aggro enemies so you can deal backstab critical damage. But they also can do fancier moves exclusive to this game.

That Astral Chain that binds the Legion to your arm? You can make it active while holding ZL to Chain Counter enemies who try to bum rush you, launching them like a catapult and stunning them as they crash. You can also wrap enemies with the chain by circling your Legion around them, then follow up with a special attack or two.

Best of all, you can perform tag-team Sync attacks that activate when you press ZL when your cop glows blue. And even call your Legion just before you get hit so that it can parry and counter most attacks for you; that’s called a Perfect Call. Do unlock it as soon as you can in your Legion skill tree because you’ll need all these skills if you plan on fighting the game’s many bad guys who will wail on you hard if you’re the least bit unattentive.

These controls may take a while for you to getting used to, but once you master it, they all work fluidly and in tandem. PlatinumGames is never one to make combat stale, and Astral Chain maintains that tradition to a tee. It’s so goddamn satisfying to hit that ZL when you see that blue glint from your character, then dodge any incoming attack from a flying stray chimera, followed up with you calling back your Axe Legion to block yet another stray laser blast from one of the game’s bigger chimeras.

Moments like these are executable within your fingertips thanks to peerless controls that let you multitask between Legion and cop with ease. There’s a ton of beauty in its carnage, chaos, and tag-team play; a ballet dance of destruction, if I’m being blunt here.

For the record, set the game to Standard Platinum difficulty to get the most out your experience. Casual mode is fun and all, but you’ll learn a lot from being challenged by a game like this in its true state.

Having said that, don’t expect the game’s combat to be as speedy and precise as Bayonetta’s. Since you need to upgrade equipment and even equip skills and buffs for your Legion through the course of the game, the game takes the less-than-60-frames-per-second approach by choice so that players new and old can keep up with the tag team Legion combat without being overwhelmed.

It’s still a tense action game, don’t get me wrong, but it’s a tad more forgiving than past PlatinumGames’ hardcore efforts.

Your Legion isn’t just for fighting; you’ll use them in creative ways to do police work. Be it capturing runaway crooks with your Astral Chain or tracking chimera tracks that will lead you to a stray Astral field portal, your life as a Neuron officer means you’ll be doing a good chunk of non-combat activities to level up, get new equips and stat boosts, and

You’ll even get to solve a few math problems and some riddles for a few folks using your IRIS scanner. You do this by pressing the + button, then it’ll display whatever info you need on a particular target. It’s basically Astral Chain’s version of Detective Mode.

Honestly, this is the diversity that’s needed in a game filled with combat, and does help in flesh out the living breathing world of the Ark and its police state plight. The cheery and anime dispositions of your cast members from your handler Olive to your medic Brenda help breathe more life in the world populated by Masakazu Katsura-illustrated bishies of shapes and types.

Waifu fans can also add desk policewoman Marie and her alter-ego Lappy the Neuron police dog to the long list of pop culture bespectacled Asian waifus thanks to her cheery and “jiggly” personality. Heck, even the vending machines that talk to you range from sickly to snarky.

Which is a nice addition, given that you have a pretty bland main character to deal with. I get that it’s supposed to be the player character, but other games that let you control your own lead (ala Mass Effect trilogy) at least have some life and VOs to perfect that immersion.

Still, any game that lets you wear a cardbox board for a helmet shouldn’t be criticized too much.

Coupled with a pretty standard anime plot featuring the “chosen one” narrative and obvious bad guys telegraphed to doing bad guy things involving the game’s macguffins, with a wasted opportunity to address the tamed/wild chimera angle, you won’t find any surprises here.

Existential crisis storyline filled with tragic more-human-that-robot heroes this ain’t, but it’ll do if you just want simple plotlines leading to kick-ass battles.

Part RPG, part open-world quest-a-thon, but mostly an action game with a pretty neat tag-team mechanic that takes a while to master, Astral Chain is anything but a slog. In essence, Takahisa is clearly taking the diversity and open-ended nature of his past game and putting it all here in this Nintendo Switch title.

This is despite the fact that he was doing his damnest not to say it out during the Taro-Takahisa media interview special during last weekend’s Animangaki anime festival for fear of Square Enix’s wrath. The best part is that this gameplay diversity makes for a more fleshed-out game, even if the main character you’re playing as is the unfortunate mute cypher who is just as interesting as that one famous Nintendo elf who isn’t getting top billing for his games.

Astral Chain will remind you of a number of titles like Batman: Arkham Asylum and Devil May Cry 5Â at first glance. But dig a little deeper and you’ll see that it’s a PlatinumGames title through and through.

From its offbeat humour during the game’s downtime to the thrills of cop-and-Legion tag-team acrobatic combat coupled with an ace rockin’ soundtrack, I do hope this new IP will put the company further into the mainstream limelight. Next to Splatoon, this is definitely one of Nintendo’s best new IPs in a long, long while.

Like our review? Want to get better at Astral Chain? Then check out our top tier guide!