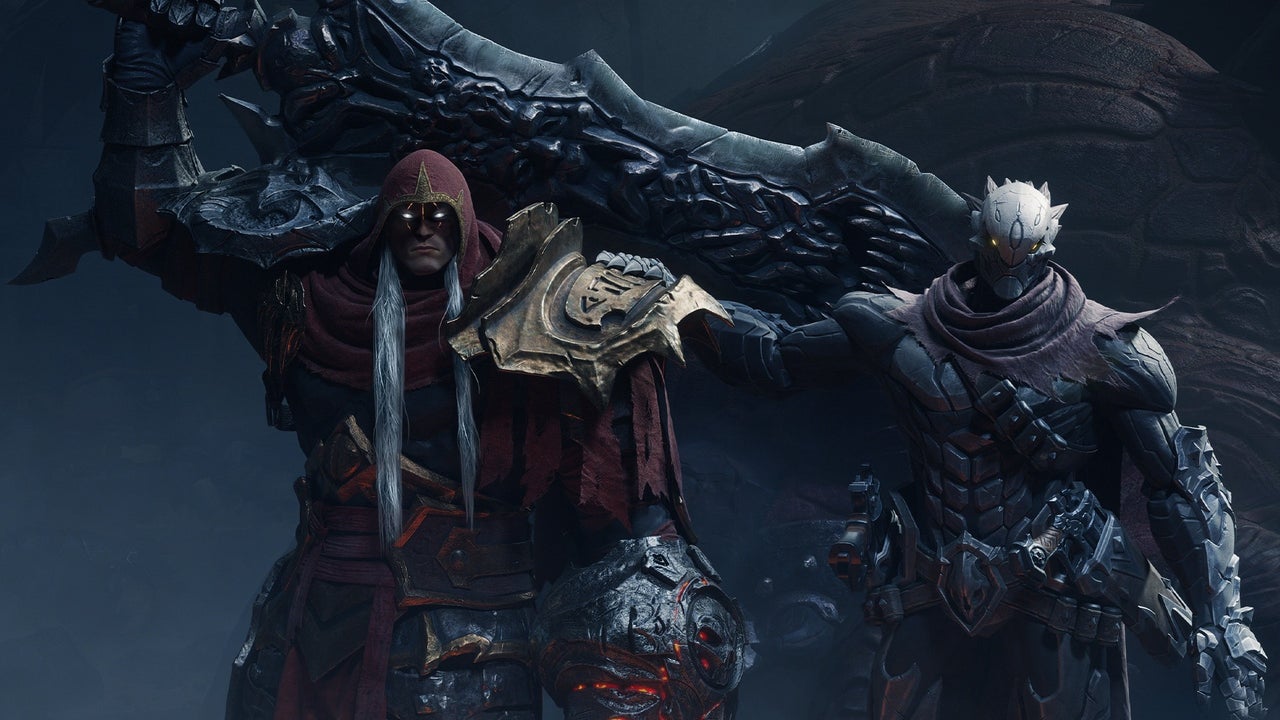 Trust the Airship Syndicate (or ex-Vigil Games, if you want to be blunt) to be inspired by gaming design trends they like while putting a spin onto it. With the first Darksiders, it’s The Legend of Zelda. With Darksiders 2, it’s the 3D Prince of Persia titles. And now with Darksiders Genesis, it’s a little bit Diablo and a tad more old-school isometric action games in the 80s and 90s.

Does it matter that it’s borrowing a lot from existing sources? Not really, provided the game itself is fun through and through. This new Darksiders game is definitely that and an extra bag of end-of-the-world-flavoured chips.

It’s basically a tinge of lemon accompanied with tons of chilli spice, in case such a flavour exists.

The story is simple: taking place way before the first Darksiders, uber-powerful horsemen siblings Strife and War tag-team up to find Lucifer in the underworld and bring him to justice. How? By wading through many stages and dungeons filled with demon hordes, puzzles, and isometric platforming and fighting goodness.

By that description alone, you can already tell that the game is cribbing its isometric action format from classics like Equinox, Solstice, and your old-school Rare games. You get plopped onto a map, you explore its nooks and crannies, kill a lot of angry demons, then solve a few static and jumping puzzles to progress.

The action RPG-bit? That pops up when you’re buffing up Strife and War’s stats via the Creature Core system.

Every enemy you kill will occasionally drop purple or gold gems that you can slot to your Creature Core stat tree. By linking them up properly, you can have your team take more damage, inflict more, or even have special properties in their special “Wrath” moves that usually dish out AoEs or assist in your kiting tactics. Also, you’ll need to amass souls and trade them with the series’ slithery shopkeeper Vulgrim and his filled-out demon lady buddy Dis for new cores, upgrades, and new Strife/War skills for toying with.

Speaking of differing playstyles, Strife and War are unique in their own right. The former is the best-ranged character in the game with some okay melee options, while the latter hits hard and dishes out melees and oversized sword slashes like free lunches. Strife zones and spaces while also being able to move faster than his brother, and can even switch between special gun ammo that either inflicts a chain lightning effect or just summon debilitating gravity holes.

This being his first Darksiders player character experience, he’s a hoot to play as, especially if you’re familiar with isometric-slash-top-down fares like Smash TV or thatÂ Lara Croft and the Guardian of Light Tomb RaiderÂ spin-off.

While the game may feel like it’s tailored towards Strife’s skillsets and gun combat, you’ll still get a kick out of War’s up-close and personal playstyle. Once an enemy is within War’s reach, they’ll get brutalized to kingdom come. The sounds and audio effects that accompany the hack-and-slash actions, down to even the blasts from one of Strife’s more powerful attacks, also helps keep your fingers repeatedly pressing the trigger buttons.

Do all of these components gel well into one completely fun package? Yes, and it’s a splendid experience dishing out sword attacks, then having Strife tag in to pull off a 360 spinning gun attack, then following up with “spectre summons” so that enemies get fooled with Strife decoys. While I’m chain-blasting them to kingdom come for that sweet, sweet soul currency.

Sure, I do wish the screen can zoom out a bit more and the colour palettes can be a tad more striking for the enemies so that I don’t get blindsided as often. And while I haven’t had any issue with isometric platforming, some players who aren’t used to this shift in perspective may die more times just getting to suspended poles and ledges.

And I do wish that the game devs weren’t trying too hard in making Strife stand out with his quips. I’m fine with his dose of humour when placed side-by-side with War’s serious disposition, but it can get a bit grating and eye-rolling in almost every cutscene he’s in. It’s not as obnoxious as Sunset Overdrive’s writing, but it’s just a few steps away.

But generally, I had a ton of fun switching between characters and waylaying them to kingdom come. The puzzles too are tricky, but not entirely brain-busting. Darksiders fans will get a kick out of using the Ghost Arm, Vorpal Blade, and the Void Bomb for puzzle-solving shenanigans.

Need to get to a ledge but it’s too high? Just find two Void Bomb spots and gain air time Portal-style. Need to light up a bomb from afar? Just transfer flames to each brazier using your Vorpal Blade. Fun!

Darksiders Genesis may take you 10 hours for its main campaign, but the replay value here is in the fighting, farming for rare cores to power up your character further for the endgame. Grind-savvy action gamers will get a kick out of the game’s Apocalyptic setting which tests your Creature Core skill tree-managing and reflexes. Or play through the ever-escalating Arena mode where you just grind and harvest for souls and extra cores to get your characters in tip-top Apocalyptic state.

Or if you just want to power through the game and see how the horsemen fare, Normal difficulty’s the way to go. It’s a good challenge that requires just a moderate amount of Creature Core management. You can even ignore the recommended power level needed to tackle the stages if your action gaming skills are decent.

All in all, this Darksiders entry is a great way to close 2019. It sure as heck isn’t completely original, but what Darksiders game is? Airship Syndicate did a great job taking the best aspects of action RPGs and isometric action titles and put their fun and entertaining spin on it, topped off with a decent Gareth Coke-composed soundtrack that wades between tranquil acoustics to battle anthems with foreboding chants.

That’s more than enough to earn it a reputation for being this year’s dark horse.

Tales of Arise Sales Are Past The 1.5 Million Mark