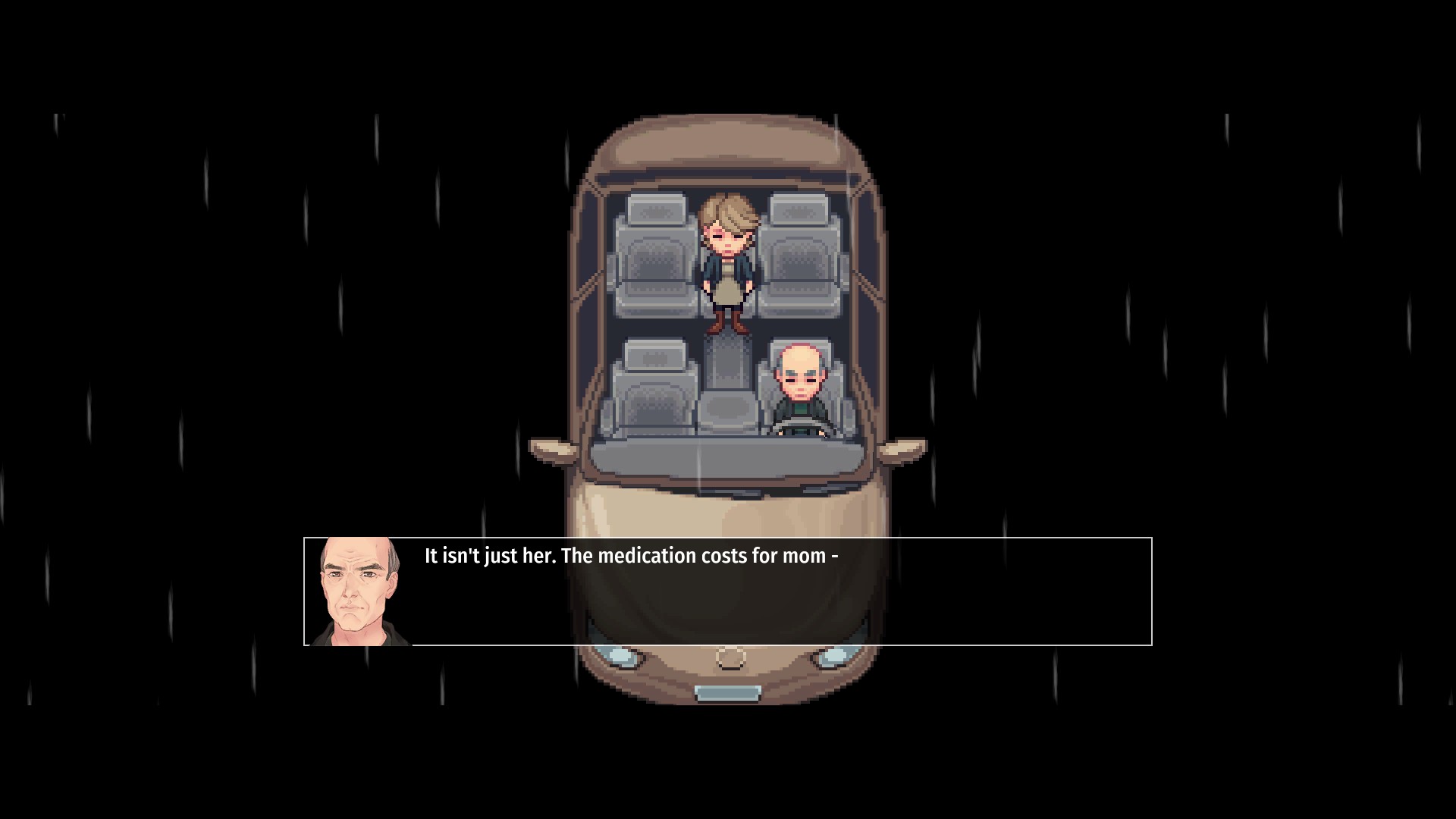 As the title suggests, Little Red Lie is a game about lying. However, the characters’ financial standings are also prominent. In a podcast interview with The Shelf, developer Will Oâ€™Neill revealed that while lying ended up as the main theme in the end, â€œitâ€™s still a game thatâ€™s very much about moneyâ€.

The game alternates between two main playable characters, Sarah Stone and Arthur Fox. At the start of the game, the middle-class Sarah has been laid off but hides the truth from her parents, who are facing financial troubles of their own while needing to take care of Sarah’s shut-in sister. Meanwhile, Arthur is rich and makes a living as a financial guru while looking down on others, especially the ones he supposedly helps.

The Park family in Parasite had a sense of detachment and quiet disdain for the lower class too, but they still werenâ€™t completely detestable characters. In contrast, Arthur is a sociopath who is truly despicable in his words and actions. He has a massive ego and relies on cash to make himself feel good, and is devoid of genuine repentance.

Sarah, with her difficult circumstances, is easily the more relatable character. While she lies just as much as Arthur (itâ€™s a game about lies, after all), it’s largely representative of her being an imperfect human being. Nevertheless, I have to admit that some of her thoughts and words made me raise my eyebrow.

For example, Sarah begins one of her inner monologues by saying that she hates “people my own age having to be servile towards me”. She later elaborates by thinking: “I know itâ€™s just the awkwardness of being happy that Iâ€™m not you. The fear that if things keep going the way theyâ€™re going, that I might end up working at a job like yours, too”.

It’s not exactly the same as what Parasite’s Kim family (who infiltrated the Park household) gets up to, but it’s surprising in a similar manner. The struggling characters that we are supposed to empathize are shown to be capable of questionable deeds or thoughts that make us reassess our support for them. There is another character in the game who draws much more direct comparisons to the Kims and their actions, but I won’t spoil the rest.

Despite my keenness on making these comparisons, Little Red Lie is ultimately a very different beast from Parasite. It deals with not just lies but subjects like family, debt, and depression, and it doesn’t share Parasite’s razor-sharp focus on class.

But as Oâ€™Neill said, “itâ€™s still a game thatâ€™s very much about money”. And in the process, class inevitably comes into the picture. Sarah’s thoughts about waitresses, for example, isn’t just insulting but shows how she feels about their respective social standings.

And then there’s Arthur, who cannot even stomach the idea of flying economy class and – like the Kim patriarch – comments on the smell of the common folk. With money and lies, he manages to buy a coach ticket and make his way to the lounge, where he is the only customer. A wall separates him from those in the normal waiting area – a literal social divide.

Before Parasite sparked my interest, I never paid attention to how games included the subject of class in their content. Perhaps it’s time we did and see what they have to say. If you know of any video games that we missed out, let us know either here or on Facebook and Twitter.

Analysis,Feature,News
Hellboy Teams Up With Were-Jaguar And Rides A Dragon In New Red Band Trailer

The second trailer for the upcoming Hellboy reboot is here, and it's much more epic due to the fact that it can now celebrate its newly-approved offic...

For a series supposedly beaten to death like a proverbial horse corpse, the latest Call of Duty is attempting a lot of new things. Best of all, it dis...

The Asian Games 2018 marks the first time a slew of Esports tournaments are hosted in an Olympics-sanctioned environment. Granted it's a demonstration...