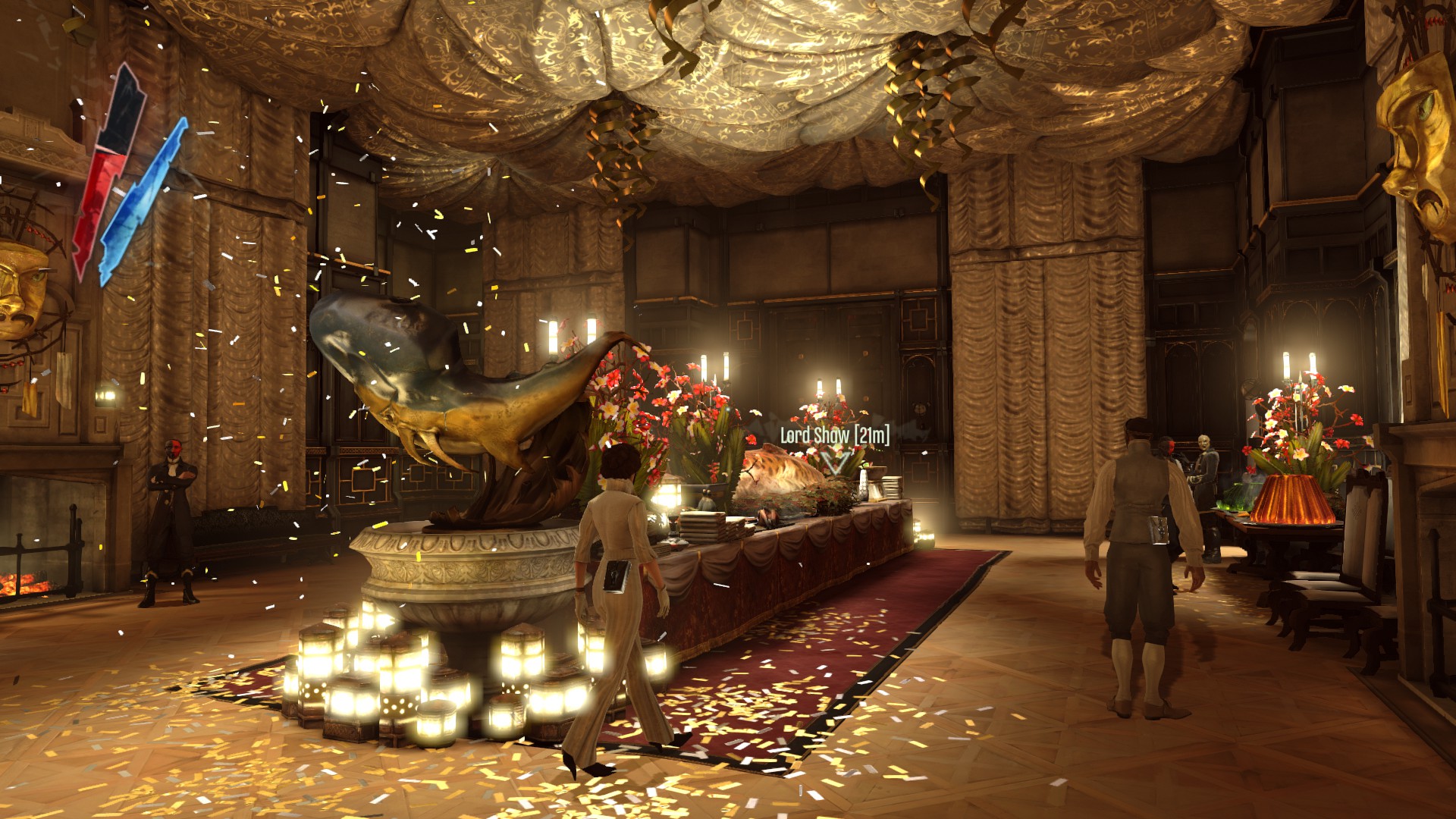 At one point in Parasite, the movie contrasts the Park family’s birthday preparations for their son with scenes of a crowded gym-turned-flood shelter. It becomes particularly disconcerting when one of the Park’s guests performs an opera song in the garden of their comfortable upper-class house.

The audience is well aware of the situation in the gym, but the upper class of the film are utterly oblivious. They indulge themselves in art and leisure while the lower class worry about their survival. As professor Paul Piff, quoted by Tori DeAngelis in an article about class differences, put it: “With wealth and privilege comes this island of sorts, this increased insularity from others”.

It was that moment that made me think of Lady Boyle’s Last Party in Dishonored.

Lady Boyle’s Last Party is Dishonored’s fifth mission. Here, protagonist and former Lord Protector Corvo Attano is tasked with assassinating one of the Boyle sisters and has to infiltrate a fancy masquerade party held at the Boyle Mansion. It’s situated in the Estate District, which the wiki describes as being an upper-class area.

However, the area outside the mansion has been affected by the rat plague that pervades the game’s Victorian and steampunk-inspired (the actual power source used is whale oil instead of steam) setting of Dunwall. When you arrive, you witness menacing Tall Boys blasting zombie-like Weepers off a bridge while guards on foot help to patrol the streets.

With the general grey-ish aesthetic of Dunwall and the effects of the plague, I seldom made note of whether I was in a wealthy or poor district when I played the game. But in Lady Boyle’s party, the opulence on display sends a crystal clear message that not all in Dunwall enjoy equal comforts.

As the enigmatic Outsider tells Corvo: “Half the city can see the lights from the party, and they dream of the delights inside.” Or as Paul Walker noted in his Dishonored feature for Rock, Paper, Shotgun, “the gated communities in which the privileged are ensconced in relative safety and comfort, insulated from the decay and disease which envelopes the rest of Dunwallâ€™s population in abject misery”. And during the Boyle party, the level of comfort on display is clearly beyond relative.

But even within the confines of the Boyle Manor, the injustice of class exists, although not in plain sight. Walker’s piece revolves around the Heart, a device that doesn’t just point you to hidden items, but reveals the inner thoughts of NPCs. When I first played Dishonored over half a decade ago, I wasn’t interested in the latter feature.

After reading Walker’s article, however, I decided to whip the Heart out inside the Boyle Mansion. I pointed it at one of the servants. “The pain in her back is constant. Nothing helps,” whispered the Heart.

“The house help is treated poorly. But there are worse ways to earn a coin”, said the Heart of another. For the third servant: “Work is never done for the lowly servant”. For the fourth: “For all the hard work, there is little reward for her”.

Bong Joon Ho, Parasite’s director, had said of the film’s title: “Because the story is about the poor family infiltrating and creeping into the rich house, it seems very obvious that Parasite refers to the poor family… But if you look at it the other way, you can say that rich family, they’re also parasites in terms of labour. They can’t even wash dishes, they can’t drive themselves, so they leech off the poor family’s labour. So both are parasites”.

It didn’t come across as a strong message to me when I watched the movie, but seeing the Boyles and their servants (and their thoughts) was one of the things that made me go: “Bong’s explanation does make sense.”

The servants weren’t the only ones with a lower-class background, however. When I pointed the Heart at a nobleman with a half-black, half-red mask, it said: “He is low born. He has killed more than once to keep it a secret”.

That says a lot about class in Dunwall.

Day three, Week 2 of the inaugural Overwatch League season ends with teams playing to the script as Seoul Dynasty registers another 4-0 win to send th...

Update: A lot has happened with this game from 2018 up to 2021. Forza Horizon 4 has received significant improvements that warrant a score increase. P...