This guide will be updated periodically, as Genshin Impact is a constantly-updating anime RPG. Right now, we’ve included 1.2 content.Â

Genshin Impact is out for PC, PS4, and mobile phones, and it’s a helluva fun online RPG to play. It’s got some solid production values (albeit a familiar art style), and feels like a good hybrid of anime RPGs fares like the Tales of series as well as the Phantasy Star Online titles. Best of all, it’s free to play and pretty packed with content.

But who are the best characters to get in this game clearly tailored as a money-sinking gacha title which conveniently requires you to gather a party of four to venture to the lush outlands of Teyvat? Who should you fuss over and gacha for, as well as do rerolls for in case your previous attempt isn’t good enough?

Here’s a protip to enjoy Genshin Impact:Â forget about all that. Don’t worry about getting the perfect roll and spending more than a few hours just restarting and trying to roll the perfect anime waifu or husbando. This mobile gaming culture of staying glued in the first 40 minutes over and over (for god-knows-how-long) because you can’t get that high-powered pretty boy is very unhealthy and can potentially ruin your experience.

Enjoy the game, roll with what you’ve got, and experience what developer/publisher Mihoyo has created with just the Unity engine and a lot of hard work. And if you want to keep track of collectibles, teleporters, and whatnot, this Interactive World Map will do the trick.

With that said, here’s a guide which you all can use: which free characters you get is worth a darn. After playing the tutorial and early moments of the game for the first two to three hours, you’ll get a Pyro, Cryo, and Electro hero to make up your first-ever Genshin Impact party.

We will talk about them in great detail and tell you if they’re worth leveling up and focusing on in the long run. As a general rule, your starter characters are more than sufficient to play through and win Genshin Impact’s main story mode. Tier & power levels for gacha characters, starters included, only count if you’re doing high level Domains and Spiral Abyss dungeon runs. We’ll touch upon heroes you should aim for when gachaing with your free Fates currency later.

Also, we have an all-purpose beginner guide to get you up to speed; go check that out. With that said, let’s start with:

The Traveler (ie: Your Main Character) 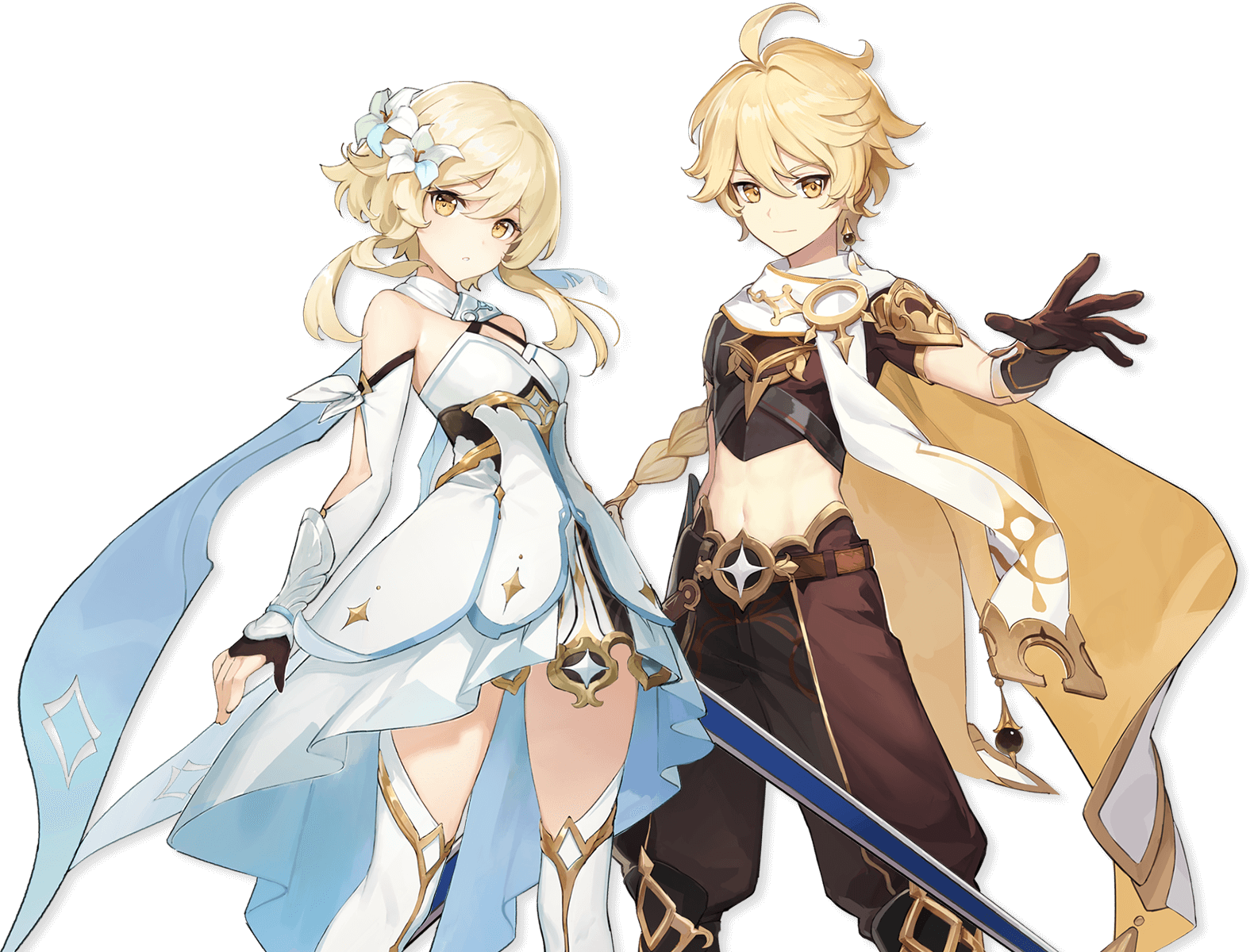 Whether you picked a boy or a girl here, it doesn’t matter. What matters is that the Traveler is your jack-of-all-trades who can be easily ascended and leveled up to the maximum number. Just finish the main quest and level up your Adventurer Ranking.

Halfway in the game, you can choose to switch the Traveler’s element to either remain Anemo or change it to Geo. Our advice? Stick to Anemo because the Traveler’s basic kit (spells, attacks, great AoE elemental burst) is adequate enough to fill in the Anemo slot. Unless you roll for S-tier Anemo warriors like Jean -more on that later- you’ll be fine sticking with the Traveler for the majority of the game.

Alright, now onto the first three playable heroes of the game. 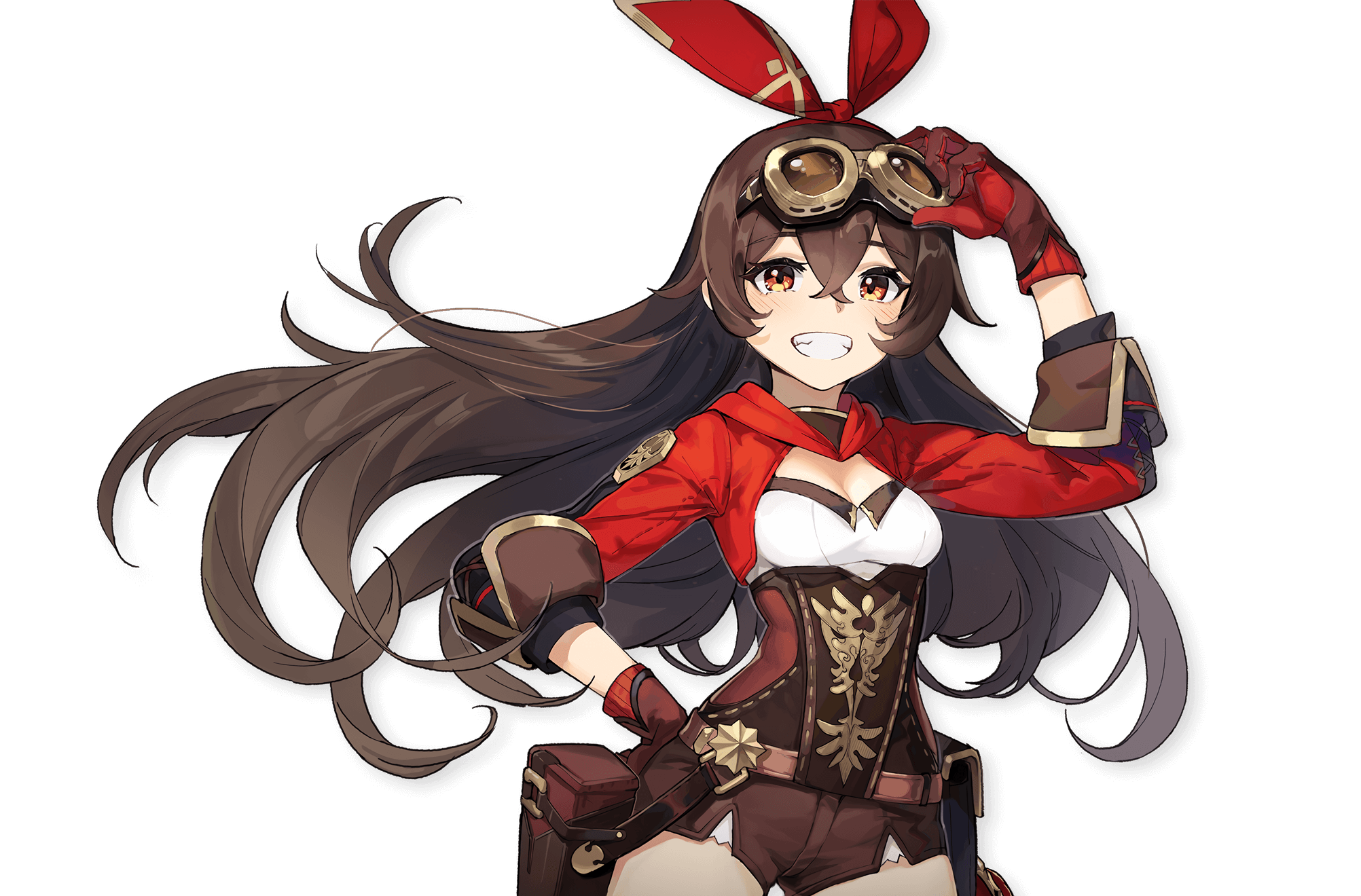 Amber is more or less the poster child of Genshin Impact, being the game’s archer to complement your melee main character. Her kit is pretty standard: she can shoot charged Pyro elemental shots, summon an explosive puppet that draws aggro, and a nifty Elemental Burst super move called Fiery Rain that deals AoE damage in a large area. As such, she is a useful starter character to get you through most of the game’s quests and Pyro-based puzzles.

As for the long-term game, however, she isn’t worth keeping around in your primary party. Amber’s combat suffers because she has weak scaling in her elemental skills and her damage output for her kit isn’t high when compared to the other starter characters. Fiery Rain is nice and all, but it won’t win high-level Domains and fights.

Verdict: Good in the main game, but replace her once you get another Pyro character if you’re looking for a better DPS character. Still, her invaluable glider stamina reduction bonus means she’s worth keeping around when exploring & uncovering Genshin Impact’s secrets. 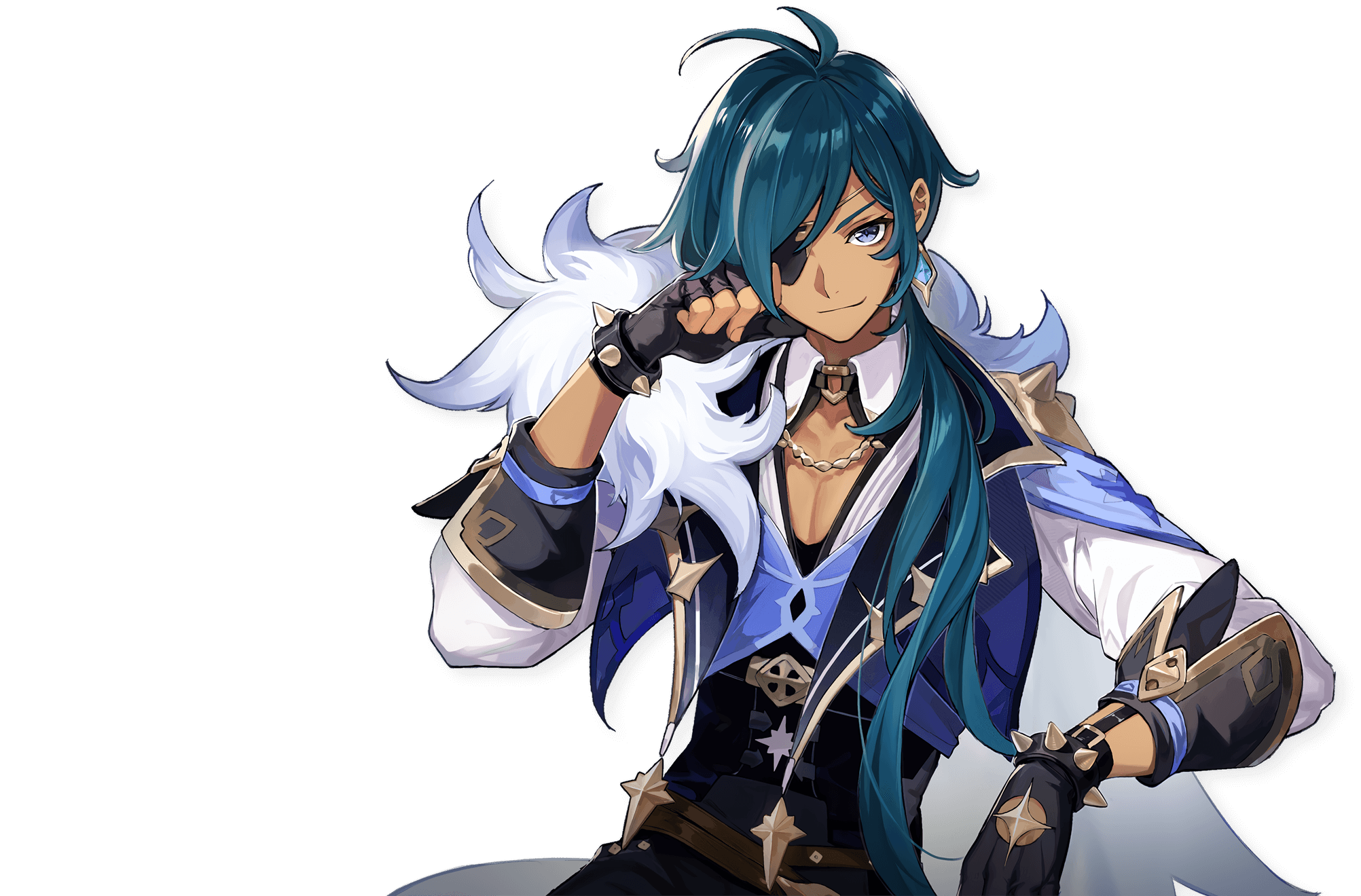 Kaeya the eyepatch-bearing pretty boy who is common in most anime RPGs is a pretty good fighter for the most bits of the main story. You’ll need him for some Cryo-based puzzles in the game. His primary attack Frostgnaw comes out in a cone, has pretty short cooldown, and applies Cryo status pretty efficiently. His Elemental Burst, Glacial Waltz, is a decent shield for Kaeya but has limited range. You have to be really up-close to enemies for it to take effect.

Like Amber, he becomes obsolete if you gacha better Cryo damage dealers and supporters, especially for the high-level content you’ll be experiencing later. Still, Kaeya’s useful when he fills in the enabler role, which basically amounts to him applying Cryo status for other party members to use elemental exploits on.

Verdict: Good in the main game, but he’s a better enabler and Cryo status applier for the rest of the adventure. Replace him if you gacha better Cryo damage dealers. 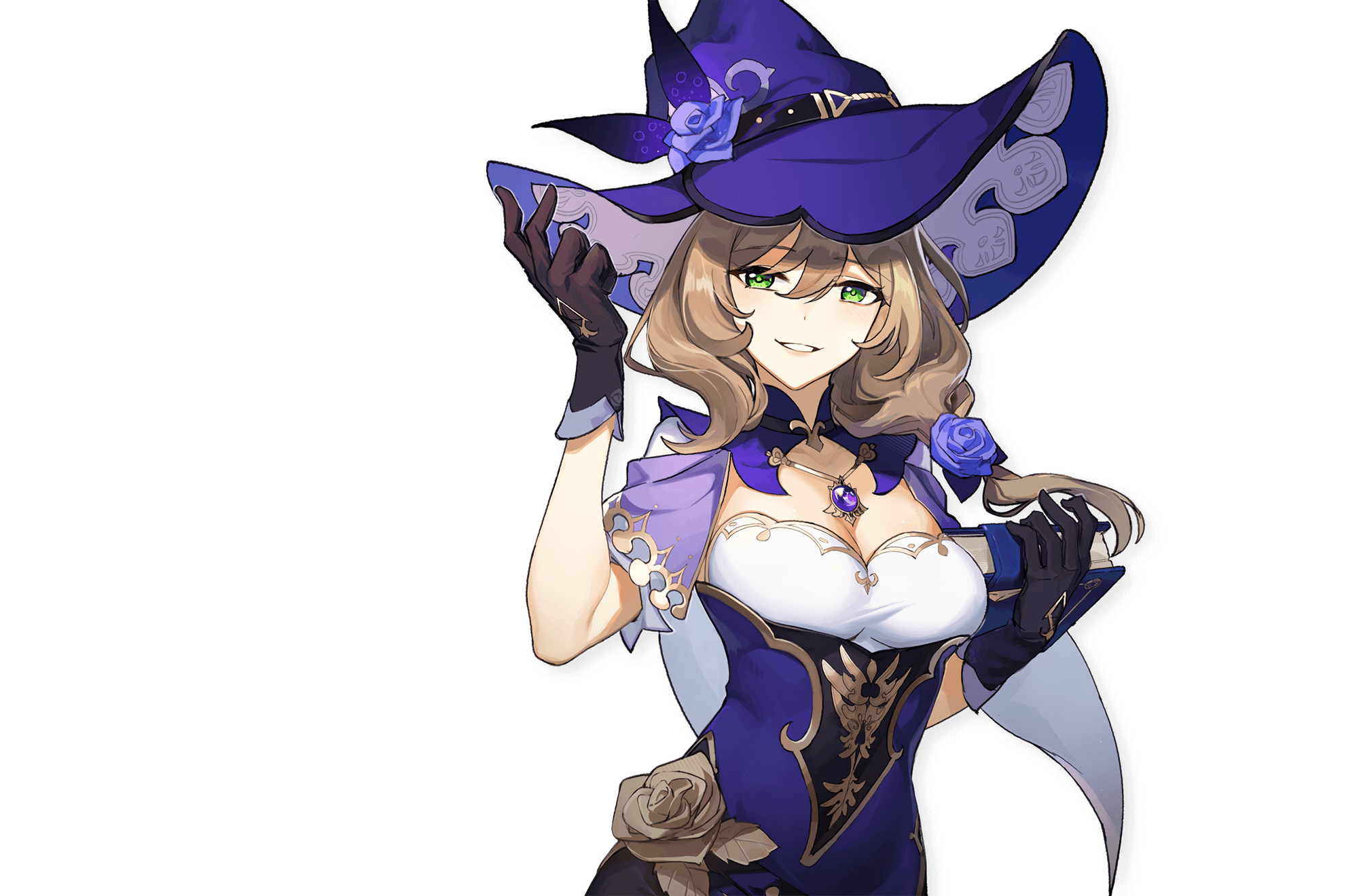 Lisa the “witchy” librarian is a pretty formidable free character you should use not just for the main quest, but for the rest of the game. She has fantastic burst damage power and scales over time if you invest in her from start to finish.

Her elemental skill Violet Arc makes her shoot out homing lightning orbs and comes with a short cooldown. If you hold the skill key for this, she delivers a devastating AoE electro damage shockwave. The damage increases based on how much conductive status enemies have, so it’s best to have her dish out regular attacks with other enablers, then use Violet Arc’s hold ability for the finish. Her elemental burst Lightning Rose applies Electro status to anyone within a large radius. Ara ara!

Verdict: Long story short, she’s a keeper. Use her as a primary damage dealer, with secondary enabler abilities for other heroes to take advantage of.Â  A-tier material all the way.

Let’s now move on to a character you’ll most likely get when you gacha early on after an hour or so into the story mission. 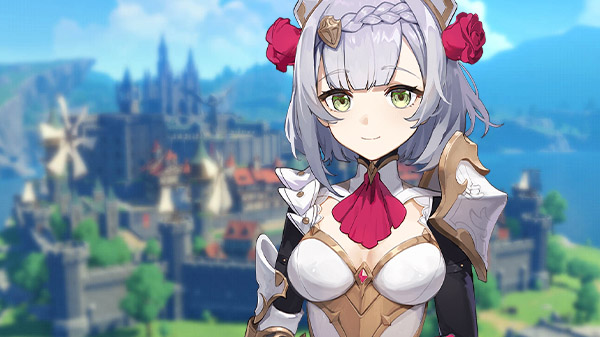 The most common character you will get to add to your repertoire, at least during this September and October when the banner is currently active. She is a 4-star Geo elemental claymore-packing maid knight who hits hard and gets a good defense buff early on. Her elemental skill Breastplate summons a protective geo shield that persists even when swapping characters. If you find yourself losing too much life, Noelle’s Breastplate and her passive will make sure to eradicate that problem just by being in the party.

She has a useful elemental burst Sweeping Time that makes her clear mobs better because of its absurdly long range. However, she doesn’t deal the most consistent damage despite handling a heavy weapon.

Verdict: She’s a keeper and a cleaner. She is better as a Support due to her good defense stats.

Now that we’ve wrapped that up, you can go ahead and play through most of the Story mode and get a good chunk of Fates currency for a good number of gacha rolls. Also another protip: trade your Primogems for Intertwined Fates because they’re useful for the banner events when gachaing.

NEXT: The top 10 gacha characters you should aim for

There's no such thing as too much Call of Duty Warzone action and playtime, especially if Activision and Infinity Ward are planning on expanding the g...

News
Oddyssey Your Space, Your Way Is A New 80s-Themed Space Sandbox Game

HoyoVerse, the makers of the hit JRPG Genshin Impact, will set its foot in Southeast Asia soon. The company announced its first Southeast Asia HQ i...