Before you flip away in disgust at the combination of words that are “erotica”, “anime”, “visual novel”, and puzzle game, hear us out. Huniepop 2- Double Date has some pretty nifty match-three mechanics that made me a bit aware of how to tackle the genre.

I can’t seem to grasp puzzle games and match-three titles like your Tetrises, Bejeweleds, and even Peggle. They’re fun and addictive, as well as have hidden depth within its seemingly arranged and random tilesets and boards. They’re clearly not for me.

I’m fine dodging bullet hell sequences in your Dodonpachis and Ikarugas, as well as learning how to deal with mixups in Street Fighter V and Guilty Gear anime fighters. But I can’t figure out the optimal way to clear rows and tiles efficiently, even on the easiest difficulty. My kryptonite, in other words.

Visual novel-style games, on the other hand? Yeah, I can get behind it. So as a games writer and content creator who has to do his homework in keeping up with new titles coming in on 2021, imagine my surprise that the sequel to the notorious visual novel-slash-puzzle game Huniepop is out right now. And yes, it’s about as harem a concept as it gets when it comes to these “ahem” titles. 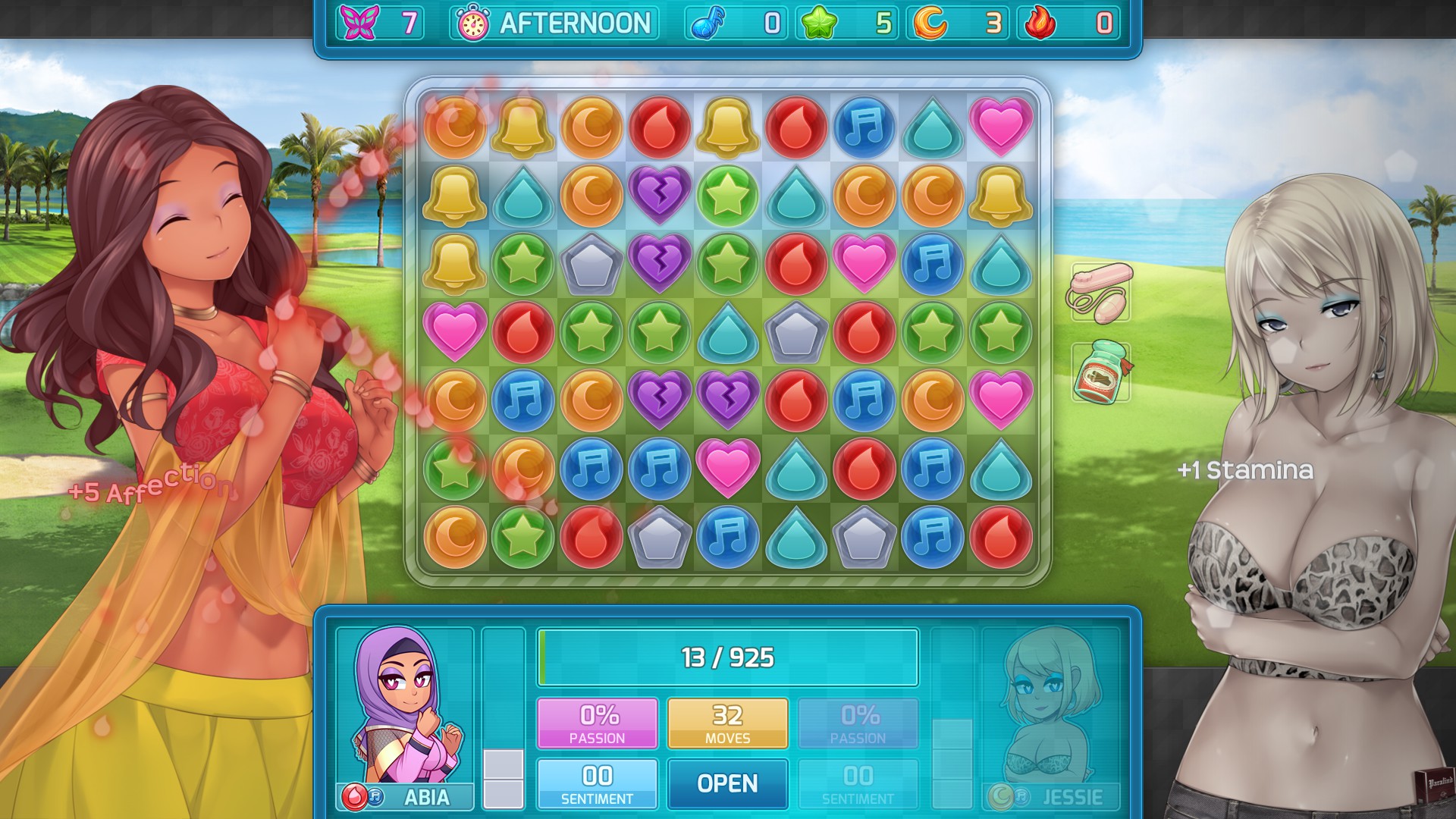 The gist of HuniePop 2’s gameplay is this: you need to match three similar shapes on the board to raise up the affection meter at the bottom; these fights are framed as dates with women in the Huniepop universe. Matching their favourite colours means more affection. Matching pink hearts will boost affection gain in subsequent colour matches. If you match purple broken hearts, you piss off the woman and will come close to a game over. Also, if you use up all your turns, it’s also game over.

Maxing out the meter means you win the game, and also have a successful date with your partner and a little “nudge nudge wink wink” say no more action. The game does reward you with pictures I can’t share here lest we get flagged for pornography. So here’s a random gameplay screenshot of a Japanophile on a date with her boss instead. 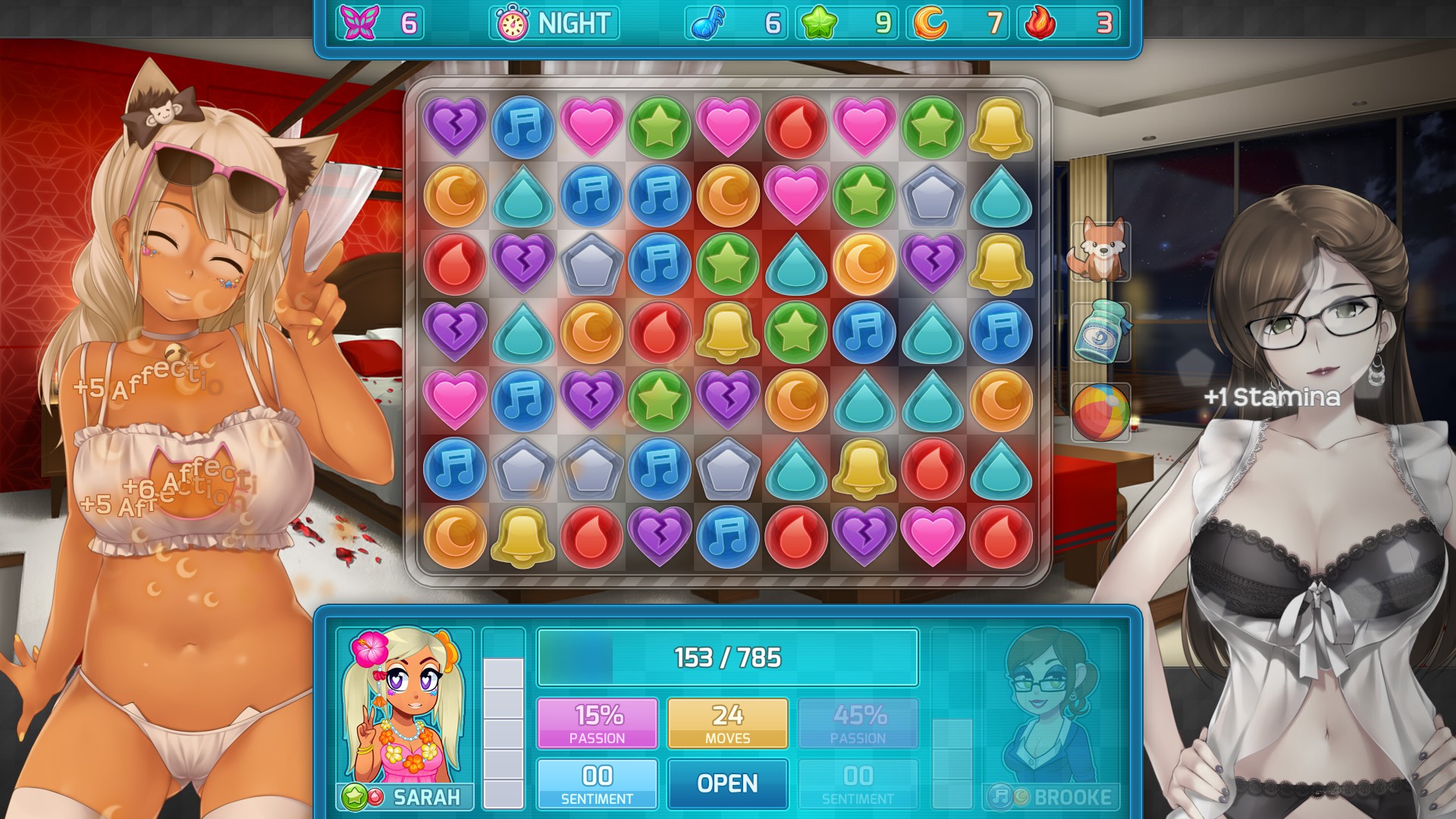 Essentially, it’s a modified Bejeweled with anime tiddies. The difference with HuniePop 2? You now have to date two women simultaneously, as per the subtitle’s new hook. This means you have to switch them around while matching their favourite colours to get the most affection. There’s also a stamina meter to keep track of. If you’re too focused on one girl, she’ll run out of stamina and cannot act for four turns when she’s exhausted. This means you need to switch back to the other girl and do the match-three deed with her. You’ll also have to work twice as hard to get both girl’s passion levels up since they’re on separate passion meters.

This becomes a challenging juggling act as you’re making sure you’re getting the most affection points from matches. It’s even tougher when the affection meter requirements get higher and higher with each successful date & mÃ©nage Ã  trois, and more purple hearts start littering the board to the point where every possible match might be your last.

Suddenly, spacial awareness of the tile and board is more important. There’s no time limit here, so you can take your sweet time planning ahead and lining up potential 4 or 5 matches while taking into account a girl’s favoured colour. For instance, when I’m doing certain characters with the same favoured red colour orb, I make sure to save them for bigger chains, increasing their Passion levels before the final 10 turns occur.

Thankfully there are gifts you can use to manipulate the playing field before a date, like stuff toys that remove purple broken hearts and Tiki masks that give you extra turns. You can also talk to them (for additional turns on the board) and also feed them food (temp colour & stamina buffs), smoothies (permanent buffs for affection-gaining), and shoes (character-specific buffs). In the immortal words of your fairy pal Kyu: bitches like it when they’re fed.

As for the story? It’s as bonkers as you would expect from a cultured title like HuniePop 2: you have to get fairy wings so that you can summon a pair of nympho demons so that you can satiate them lest they destroy the world. And to get them fairy wings? You need to have threesomes with a boatload of ladies while on the creatively-titled Inna de Poona resort. Not only do you have girls from the first game, but you have new ones like a MILF hotel owner, an innocent hotel attendant, a smelly weeb, and a foreign girl in a hijab who works in security.

It’s also interesting to see how each of the 12 girls is paired with each other. Who knew that a repressed foreigner would hook up with an 18-year old goth girl, or two mature women would have a lot in common with for casual whoopie. HuniePop 2 isn’t exactly high art, but it does have fun with its absurd premise and 18+ nonsense, which is more than I can say for most cultured visual novels with itty-bitty gameplay segments. As a bonus, you can choose to switch on the censor bars and keep the ladies mostly clothed during the special scenes in case you can’t handle it.

HuniePop 2 does have a nice tone and cheery feel to it, with a heartwarming message underneath its challenging puzzler gameplay: prepwork is always important, don’t treat a girl like a dick on a date, and listen to them so that you say the right thing. The same does apply in its gameplay: if you’re randomly matching colours without looking forward or planning ahead, you’re going to have more failures than successes like Barney Stinson.

Long story short: if the prospect of anime erotica do not turn you off, and if you don’t mind a not-so-serious dating sim with challenging puzzle bits that require a ton of focus-switching, you can do worse than HuniePop 2: Double Date.

We're still getting a Demon Slayer video game this year from Sega and Aniplex, which is what you expect from a Naruto-style 3D 1v1 brawler title. But ...

We talked about mods we want inÂ Red Dead Redemption 2 PC edition, but we never thought we'd see one being previewed a few days before its release. ...

If you want to play Square Enix and People Can Fly's latest co-op loot-and-shoot game in the best fidelity and detail possible, you'll need to pony up...