When it comes to phone innovation, where do you draw the line and say “enough”? If it’s Asus you’re asking, their solid answer would most probably be “But why?”

The Asus ROG Phone 5 is Asus’ latest iteration of their market-leading gaming smartphone device. Swiftly following last year’s release of the highly impressive ROG Phone 3, this year’s version is actually the fourth, but skipped a “generation” in their nomenclature the same reasons we have ‘3A’ in elevators – the Asian superstition and propensity to avoid the number 4.

But believe me when I say this – no shortcuts were taken (save for one which we’ll talk about it later) in the design and creation of this phone as the ROG Phone 5 is everything a mobile gamer could ask for and more.

By Gamers, For Gamers?

Regardless of platform, gamers always want the best they could get their hands on. Take a gaming PC for example. The best CPU money can buy, the latest graphics card in the market and for whatever reason, the brightest RGB LEDs as if it’ll improve one’s KD/R. Anyway, back to the main topic. Fully aware of the target market of the ROG Phone 5, Asus didn’t only improve on the internals of this year’s gaming phone, they also tweaked the aesthetics.

Gone are the visible air vents as Asus went down the more executive look with the ROG Phone 5 but that doesn’t mean that the flex has been reduced. In return, under the fully-glass exterior lies a light-up ROG logo which color can be customized via the pre-loaded Armor Crate app. Nothing shouts ‘I AM USING A GAMER PHONE!’ louder than a pulsing logo at the back of your phone. Besides -Since you have it, why not flaunt it, right? 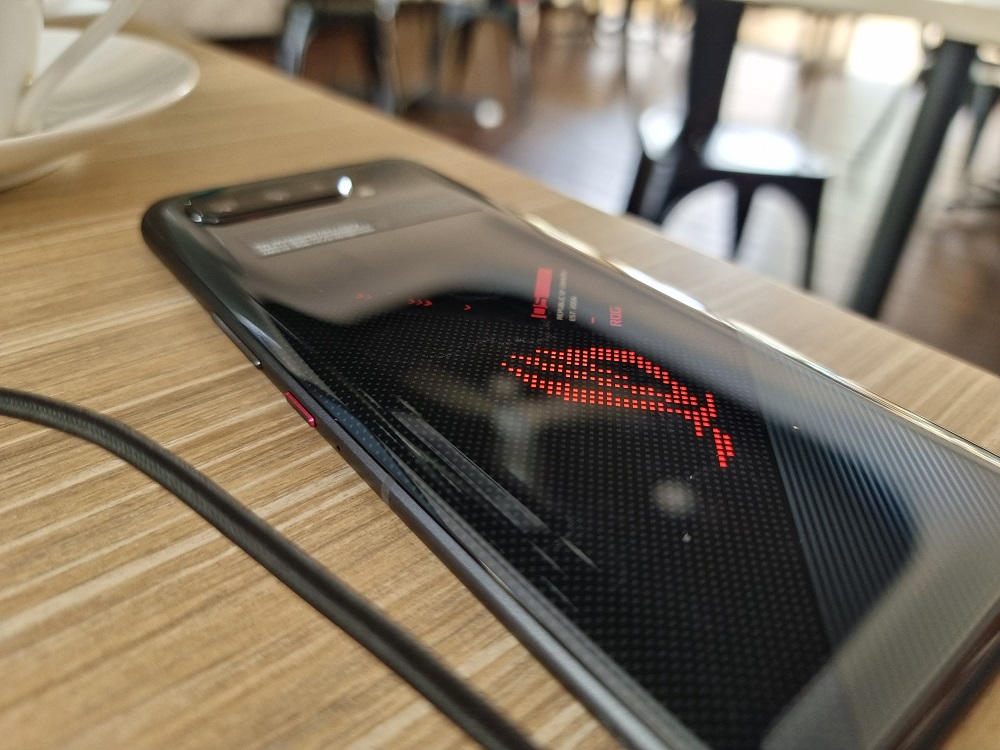 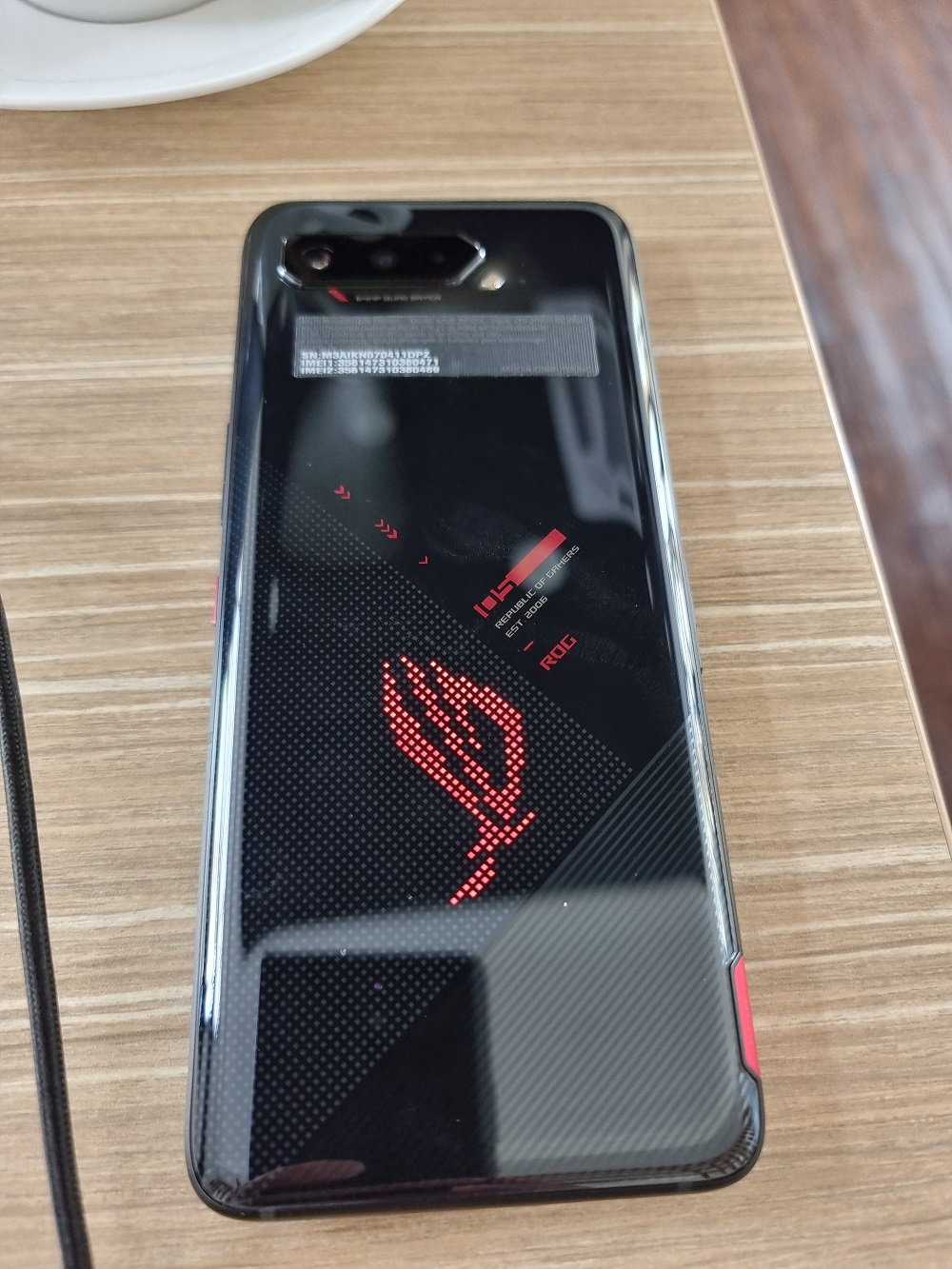 Asus is releasing three versions of the phone with the standard pictured above which hit the markets late March. The ‘Pro’ version set for release this month costs a little bit extra and comes bundled with the detachable proprietary AeroActive 5 cooling fan while the ‘Ultimate’ version, set for May will have a customizable screen and additional ultrasonic buttons at the back.

A step up from just customizing the colors of the blinking ROG logo on standard models, the ROG 5 Ultimate phones allow you to show custom animations such as battery status or even display your personalized image. Ludicrous, we know. But we’d imagine Asus had the most hardcore of mobile gamers in mind when designing this phone and left no stones unturned. Even the stuff we plebs thought we won’t need anymore -like the 3.5mm earphone jack – also made a return this year.

Internally, the ROG Phone 5 is powered by this year’s most powerful chip, the Snapdragon 888 with RAM ranging from 8GB to a whopping 18GB, which is higher than what the laptop I wrote this piece on has. Storage starts from 128GB and goes up all the way to 512GB allowing you to store not only your favourite games but pictures and videos as well.

On paper this year’s model should outperform its predecessor on almost all measurable metric although we won’t expect a significant bump in battery life. ROG Phone 5’s slightly larger and brighter screen would have offset any incremental improvements done for battery life and since both still rock 6000 mAh batteries, should display similar results when it comes to power performance.

In my previous phone review of the Samsung Galaxy S21 Ultra, I complained about how while it is indeed a beautiful device, isn’t the best phone to game on due to an almost absent bezel. On the ROG Phone 5, form and functionality beats fashion as the significantly larger bezels allow a much comfier grip without impeding any of the on-screen controls.

As you can see in the second photo, the glass rear of the phone truly is reflective which screams ‘fingerprint magnet’. But herein lies the genius behind this design. A glossy back allows a much more confident grip when gaming on landscape mode – who wants to lose a 1v1 on PUBG just because their phone slid off their hands, right? Speaking of landscape mode, there’s a second USB-C port on the side of the phone allowing better cable management for those prolonged gaming marathons. Like the ROG Phone 3, the 5 comes with customizable air triggers with improved response time.

The speakers are great – just like last year’s iteration; delivering punchier bass and crispier audio if you so choose to game sans headset. As mentioned earlier, the welcomed return of the 3.5mm earphone jack also added some thicc-ness to the silhouette. Funnily enough, despite being heavier than previously-reviewed S21 Ultra by a clear 10g, at 238 grams, the ROG Phone 5 feels lighter in the hand.

The Armoury Crate app returns to better assist you in optimizing your device be it for daily use, maximum battery life or to just crank it up for maximum performance. You can choose to set a constant refresh rate of 144 Hz or just allow the phone to automatically determine when it’s best used.

The fan controls for the AeroActive 5 fan speed and even ensure game-related data is prioritized during your gaming sessions. Every inch of the phone’s design was carefully crafted with gamers in mind.

To help you better manage your batteries, Asus have included a feature that helps regulate your charging habits better. We appreciate the phone’s ability to cap how much you want to ‘fill up’ your batteries by limiting them to a 90% charge for example. This avoids over-charging your batteries which in turn, adds to their longevity.

Yes, you read it right. Batteries. Instead of a single 6000 mAh cell, Asus have instead gone with two 3,000 mAh cells. A move which, according to Asus, allows faster charging via the 65-watt charger which comes in the box.

While it is commendable, Asus’ quest to present the ‘perfect’ gamer phone did come at a cost. As seen in the phone durability test series by popular YouTube channel JerryRigEverything, the way the motherboard and battery components are arranged internally have negatively affected the phone’s structural integrity. It is not to say that this device is fragile – it’s far from that.

It’s built like a tank, to be frank. But like tanks, there is a fatal structural flaw and exploit to be wary of which we hope Asus rectify next year. In spite of that, our take is this; You’ll have to either be really unlucky or downright deliberate to leave even a dent on this phone.

Like its predecessors, the cameras on the ROG Phone 5 while nowhere near the ballpark of other flagship brands, are still able to capture stunning photographs in any mode you want thanks to the three rear cameras. Let’s be frank. The cameras have never been Asus’ focus (heh) when designing ROG Phones but they are far from being slouches as seen in these photos below.

If you’re in the market for a flagship-tier smartphone with the highest specs available, the Asus ROG Phone 5 is definitely worth a look. Like top tier gaming PCs, the ROG Phone 5 excels in most categories it was built for. Competitive gaming-levels of performance with brilliant power management.

And then there’s the elephant in the room: the price tag.

Price-wise, it’s a fair case of “you get what you pay for” when it comes to Asus’ latest. The steep price tag even for the base model might turn off many but may appear reasonable for those who do not want any compromise when it comes to their mobile gaming experience.

Then again, considering that Asus were kind enough to chuck in an outer-shell casing and a 65-watt charging adapter into the mix – when most of the competitors do not, we feel the retail price for the device is bang on. Everything else is fine-tuned for that niche need which fulfils the wants of both the casuals and pro-gamers alike.

However, we are not fans of Asus’ move of not including the AeroActive 5 fan in the base model. Making this only available with the ‘Pro’ and ‘Ultimate’ variants somewhat left a bitter aftertaste. It’s akin to leaving out the air conditioning from that entry-level car you are buying. Why, Asus?

Still, the Asus ROG 5 is another product boasting Asus’ firm grip and understanding of what makes a mobile gamer tick, and going to town in satiating their demands.

The fifth episode of Moon Knight is now streaming on Disney+ Hotstar Malaysia. ll be discussing heavy spoilers so if you haven’t seen it or want to...

Feature,Main page
These Are The Most Expensive SNK AES Games This Year

We're in the final stretches; this is yet another SNK article in conjunction with Retro DNA, who will have an SNK tribute booth at GameStart Asia 13th...

#29. Hades (PC, Nintendo Switch) https://www.youtube.com/embed/YZZFlcE0fWE Supergiant Games' Hades has turned out to be one of the...