Aluna: Sentinel of the Shards Is Textbook “You Get What You Paid For” Material

If there’s something I love about the Simple 2000 bargain bin games, it’s that you get what you pay for. Whether it’s a 3D action game or a zombie-slaying title featuring women in bikinis and cowboy hats, you can expect a nice brainless action game with the occasional jank or two, all for one-fourth of a normal game retail price.

Aluna: Sentinel of the Shard is exactly that: a cheap alternative to a polished isometric action RPG title that offers just enough thrills for a few days before you realize that you should be playing other meatier fares. For RM39, you’ll be getting 8 hours worth of killing a ton of cursed wildlife creatures, bandits, ghosts, and lizard people in 16th century Latin America.

Based on the World of Aluna comic book, the game puts you as the titular heroine Aluna who has to restore the amulet her goddess mother entrust to her, and fulfil her action RPG destiny to be the best melee/ranged/spellcasting warrior out there.

And that means killing a ton of monsters and creatures with mouse clicks ala Diablo; you can allocate skill points to either one of the three skill trees -Melee, Ranged, Magic- to gain special abilities like a Thorn shield that reflects enemy damage, an Ultimate skill that vortexes enemies close to you and you deal massive melee damage, and all sorts of spells that buff you and nerf foes. You have a good assortment of weapons and armour pieces you can mix and match; Aluna is pretty flexible with everything she wields and wears, so you can either go melee or go ranged depending on the situation. All you be doing is killing enemies to level up, get skill points, and advance the plot. 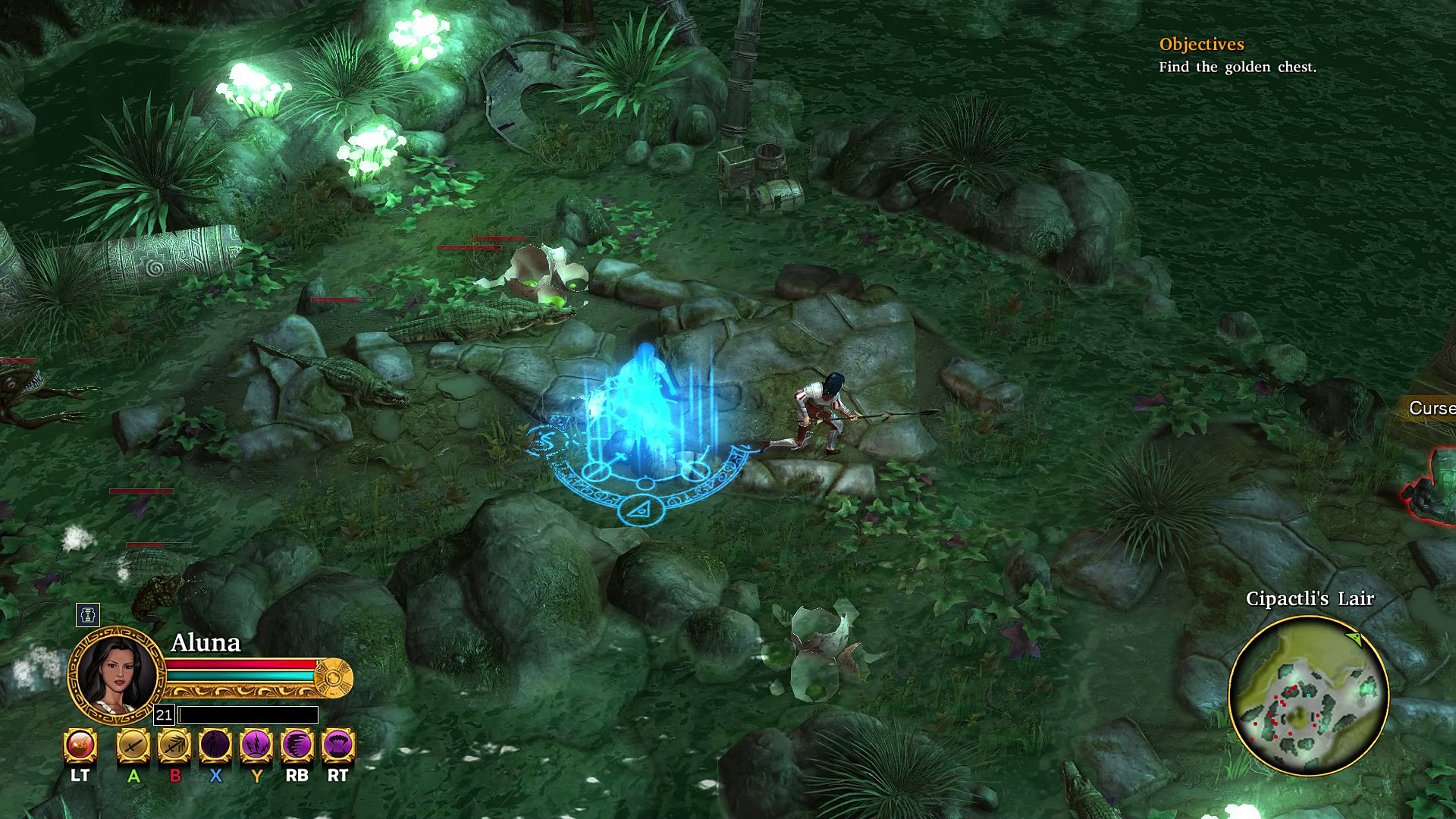 Is the combat good? It’s serviceable, I guess. You’ll be playing this for about a couple of hours until you realize a number of things: this game isn’t balanced well, your skills don’t feel that unique and powerful, and both these elements will weigh down on you and eventually feel repetitive through and through. One moment you’re cruising through bad guys like butter. The next, enemies hit harder than a giant truck and can end you in seconds unless you respec your build or spend way too much on equipment at the merchant before those items get obsolete 30 minutes later. It doesn’t do anything particularly wrong, but it doesn’t do anything right either.

Sure, the game is a crime to look at, but let’s be fair: Aluna’s in-game 3D art style is reminiscent of a game made back in the mid-2000s but with some level of polish. It’s humble-looking and does the job in getting its generic action RPG visuals across. It’s also got some nice quality of life features like infinite potions (with significant cooldown time), free teleportation to anywhere you’ve visited, and free respeccing anywhere and anytime.

For RM39, you could do a whole lot worse than with Aluna’s competently average action RPG offerings. If you have nothing better to do and tapped out on other worthier action RPG fares, that is.

Reviews
Samsung's S22+ Is A Refined Beast of A Phone

After spending over two weeks testing out the Samsung S22+, we came to this conclusion: if the S22 Ultra is the Formula 1 car, then the S22+ would be ...

The PC Gaming Show 2022 took place earlier today. Check out all the game reveals and announcements below: Soulstice Soulstice is coming to PC...

Are you in need of more PC games for your ever-growing Xbox Game Pass library? Well, you're getting three more according to the recent Xbox live strea...