Kena: Bridge of Spirits is a beauty to look at. It’s gorgeous, its vistas and landscapes are a sight to behold, and the main title character and the Corruption enemies she fights are animated just as fluidly and smoothly as a top-tier Pixar and 3D Walt Disney animated feature.

Given Ember Labs’ beginnings as an animation studio before transitioning into video game-making, this key part of the game is really apparent. Its Balinese soundtrack also complements incredibly well with its Asian folklore trappings, from its peaceful overworld themes to its haunting chime-filled battle anthems.

The best part? Kena herself is not bogged down with extra key and in-between frames to the point where her movement and in-game controls suffer like other past titles where animation takes centerstage.Â The game itself plays like a breeze, provided if you’re into 3D platformers with a tinge of Dark Souls-esque combat. If you don’t mind these 2000-era tropes surfacing in your 2021 titles, there’s a lot to admire and love here. 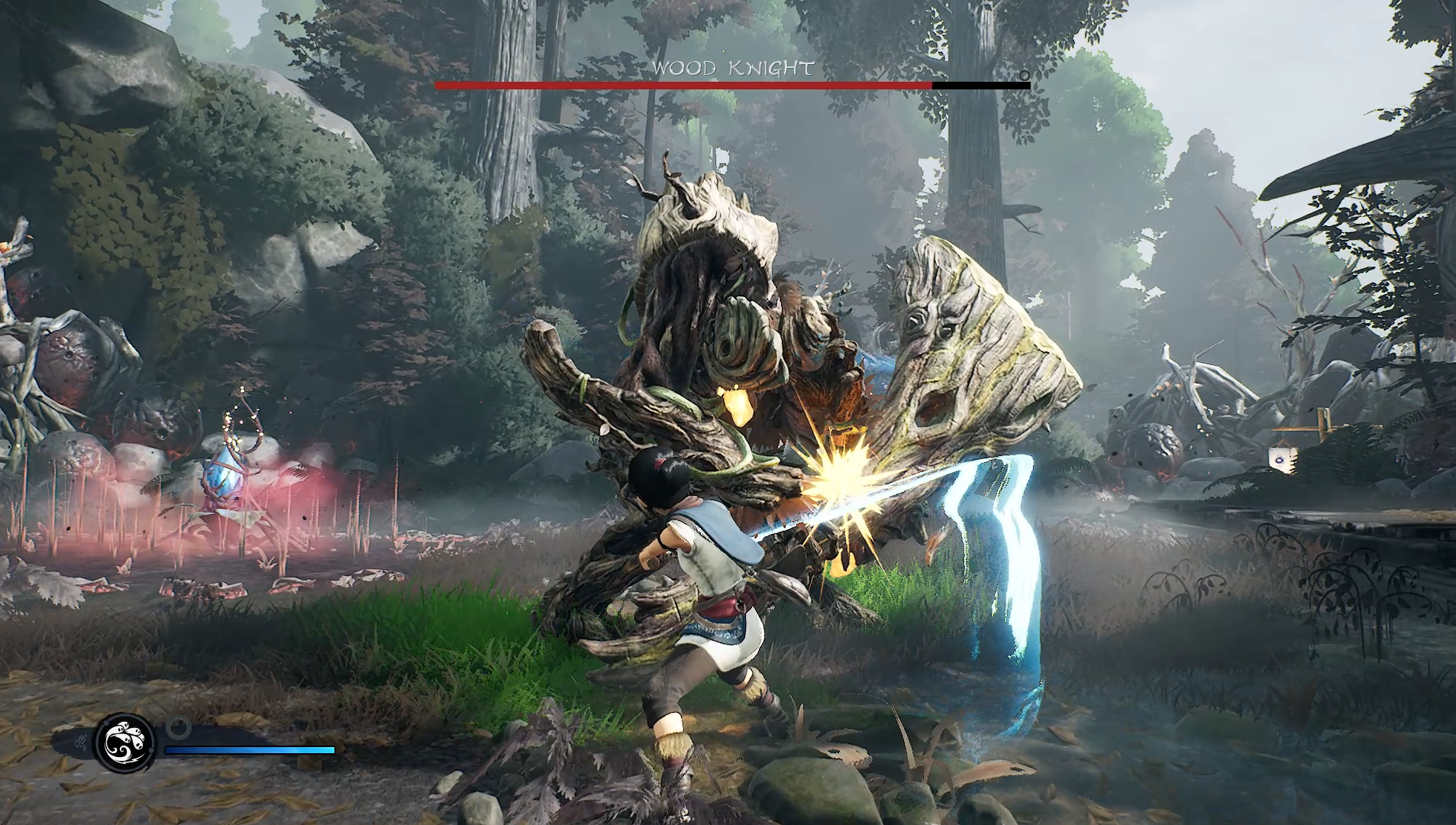 Kena’s plot revolves around our title character who is tasked with guiding lost spirits and curing a giant forest-and-mountain spirits-filled area of its ever-growing corruption. Along the way, you’ll find cute and cuddly Rot Spirits who can aid you as followers; you can command them to lift heavy rocks for you, form into “spirit dragons” that you can control to break down idle roots and spores of corruption, and even unleash them onto corruption enemies to stun them momentarily, making them show off their weak spots for you to shoot your spirit arrows at. They definitely add a lot to the charm of the game and are useful in a pinch.

Speaking of armaments, Kena has access to a staff for fast/slow-but-heavy melee attacks, a spirit bow with rechargeable arrows to pick off foes from afar, and spirit bombs to displace them mid-battle. She also has a Soulslike block and a parry for defensive purposes, though the latter has quite a narrow window of timing, you’d probably get hurt more often just pulling it off.

Luckily, Kena’s offensive is fast and overwhelming so she’s mostly going to be at an advantage. Save for a few key boss fights that will test your patience & skills, the action in Kena: Bridge of Spirits does get challenging but in a fair and straightforward manner. Kind of like Capcom’s Maximo series if you want to go deeper into the old-school gaming well. 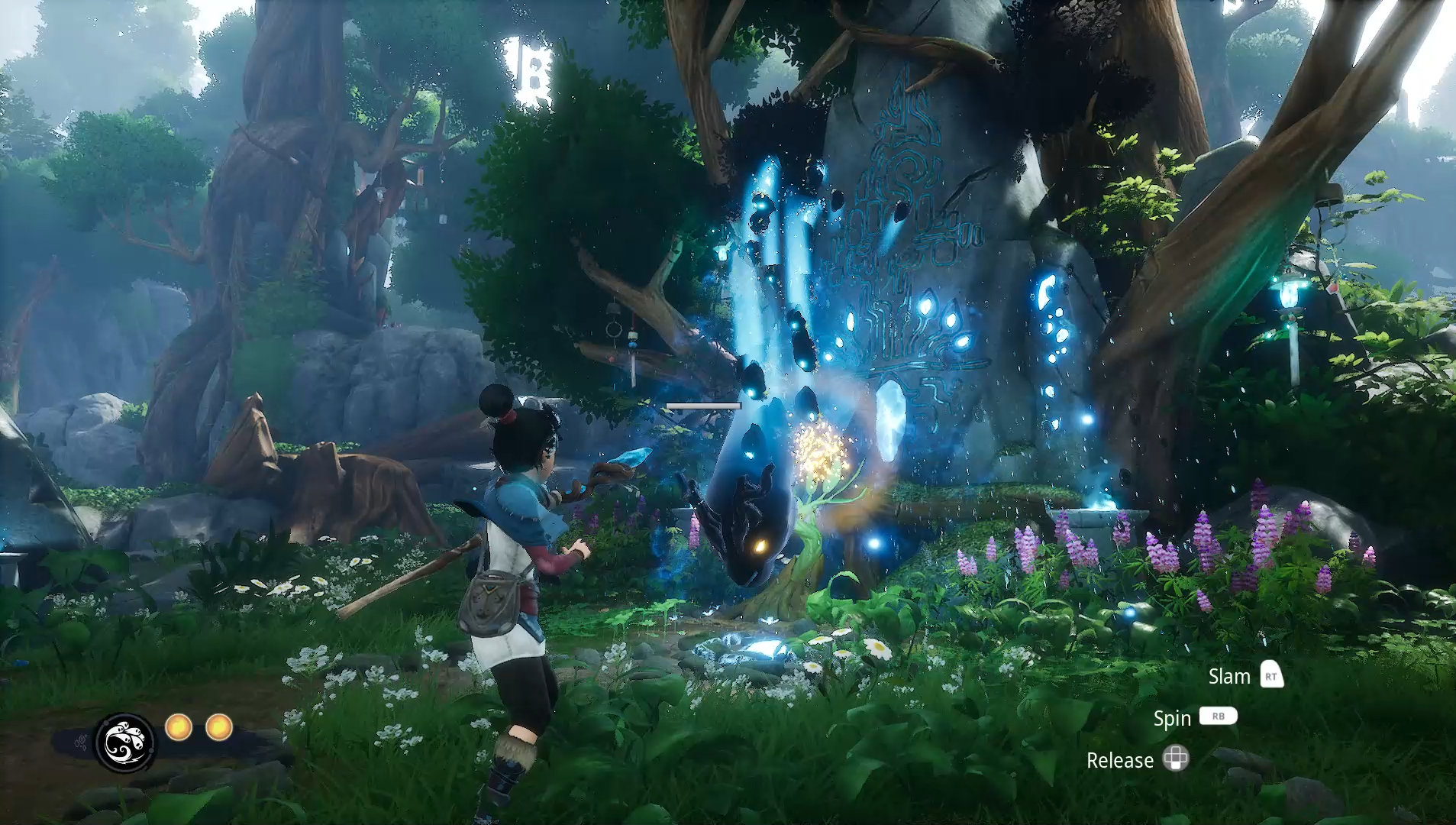 The puzzles and platforming in Kena’s adventure is also as basic as you can get: use the new abilities you acquire to get through the environment and open up doors. Have a few blue spirit “switches” out of reach? Shoot them with a spirit arrow. Need to form platforms? Use your spirit bombs to temporarily make them available. There’s a huge modicum of fun to be had, despite how familiar things can get.

And that’s the only bad thing I can mention about the game: the fact that everything you do here is familiar to the point of being rote. Perhaps Ember Labs is being intentional here since it’s been eons since we had a 2000s-era platformer that’s made this well and looks this breathtaking.

Even on Medium/High settings on a PC, Kena: Bridge of Spirits’ art direction is solid as the invisible wall in the game that clearly is leading you to its linear pathway amidst its Legend of Zelda-like open world.

At the same time, you’ll be doing a lot of back-and-forth questing, platforming guesswork, by-the-numbers mob-fighting, and checking every corner of a given area to collect all the spirit tokens you can to buy new skills and cosmetic hats for your Rot Spirits. This is honestly nothing groundbreaking here; if you don’t like all the traditional gameplay stuff I mentioned, this game isn’t for you. 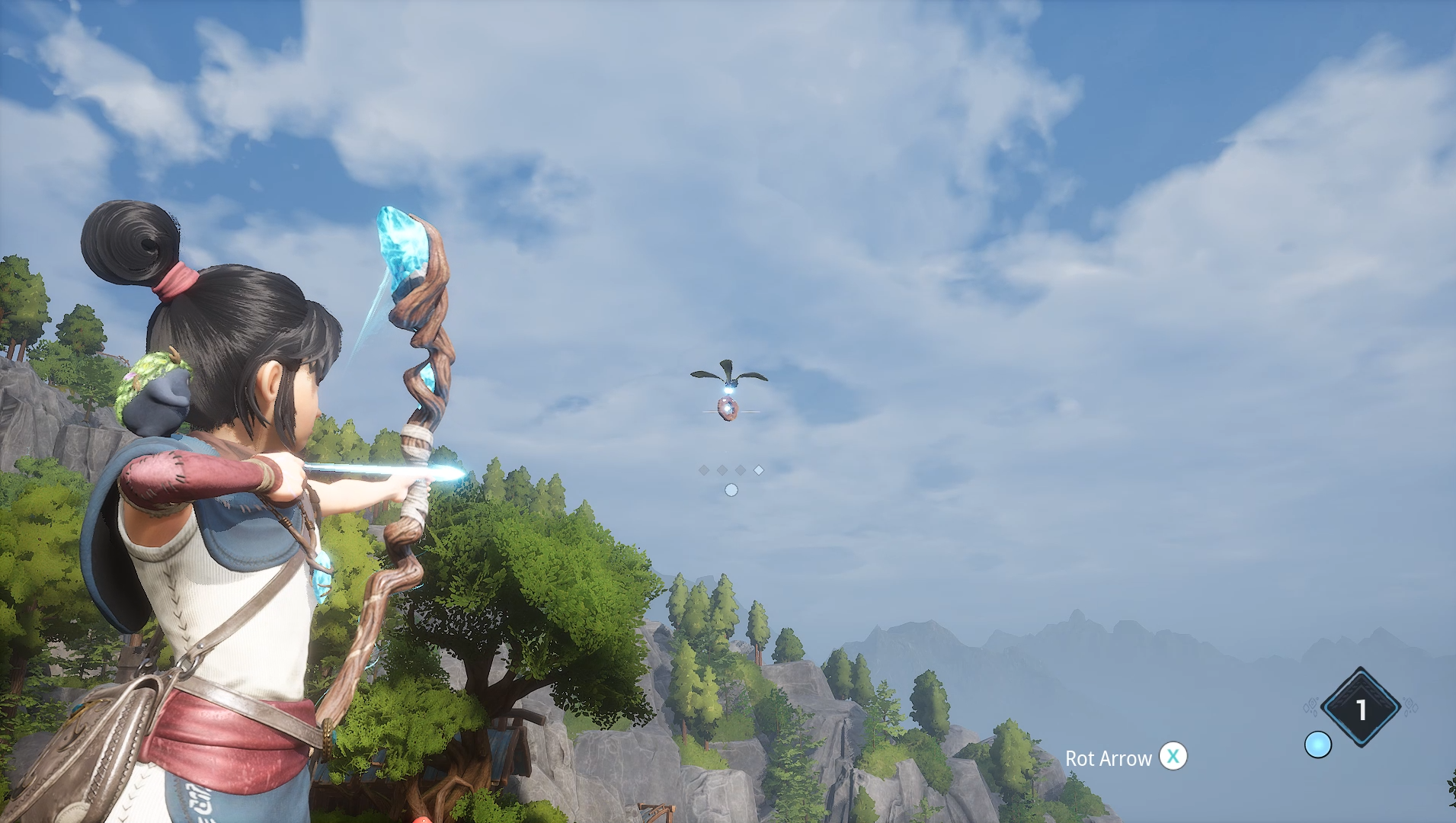 As a fan of old-school platformers of the PS2 and Gamecube era, I’m down for Ember Labs’ first-ever game offering. It could have ended up being an overproduced and bogged-down mess, but Kena: Bridge of Spirits is a wondrous 10-hour experience from start to finish. Action game veterans can blaze through the game’s combat like butter, and seasoned 3D platformer aficionados may not find anything to wow them.

Despite those quirks, everything else from this title offers a ton of charm and tightly-knit gameplay moreso than other triple-A experiences can offer these days. Sometimes all you need is a lot of heart to make your treasure of a game shine. Ember Labs did just that with this proverbial gem.

Reviews
FIFA 21 Is All Stepovers, No Dribble

Platform(s): PS4, Xbox One, PC Genre: Yearly football roster update How do you improve on something that has hit its peak? In the footballing w...

It looks like the lack of movies are having a more dire impact on local cinemas than we thought. Malaysian cinemas are now offering their cinema hall...

During Nacon Connect 2023, Nacon and Daedalic Entertainment have unveiled more gameplay footage from the upcoming The Lord Of The Rings Gollum. Pla...