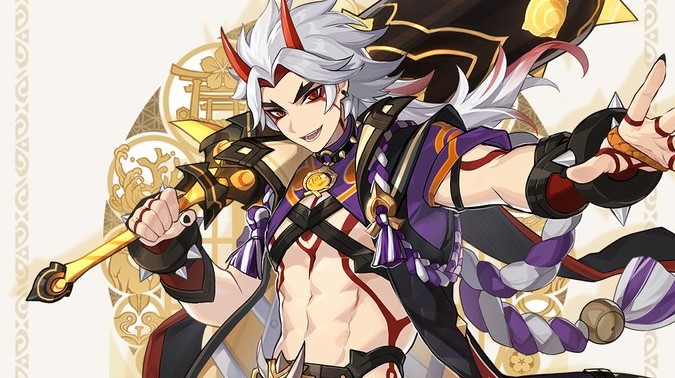 Announced ahead of time and way before he appears in story mode, we now get a first look at Genshin Impact’s latest upcoming character: Arataki Itto, the first and greatest head of the Arataki Gang.

"Hello, I'm the deputy of the Arataki Gang. If you come across any inappropriate behavior on the part of our boss, Arataki Itto, please contact me immediately. " — Kuki Shinobu

He’s a Geo user who fights with a claymore, and now competes with Zhongli for the title of “Geo Daddy”. Naturally, the internet reacts to this handsome fellow with the six-pack, comparing him to strong characters from other anime and gaming mediums.

rengoku and itto !!! just because !!! pic.twitter.com/TBVyPpt3k8

// genshin leaks (on the left)

can we just take a moment to appreciate itto model leak's hair and how it kinda looks like ibaraki douji's from onmyouji pic.twitter.com/guHV2GF97j

Given his elemental and weapon of choice, he may be the 5-star equivalent of current 4-star Knight of Favonius Noelle, though he might have an emphasis on higher DPS since that’s the current meta. Itto has no release date as of yet, but the internet is clearly clamouring for his impending arrival.

If this guy ain't voiced by the same dude as DIO, then… then… pic.twitter.com/tHFFeJNX8w

Welcome to the gang pic.twitter.com/b3crQEzVm2

What you will find when you look up the definition of beautiful: pic.twitter.com/0HpIhLZV6B