Floodland May Be The Perfect Gateway Settlement Builder

According to its Steam page, Floodland is “a society survival game set in a world destroyed by climate change.” Developed by Vile Monarch and published by Ravenscourt, the aim of the game is to survive. In this post-apocalyptic world, you act as the leader of a group of nomads looking for a place to call home. Your job is to direct your people to explore, scavenge and build settlements to unite the clans. Conflicting cultures and limited resources mean you need to make some tough choices. And boy, there’s a lot. 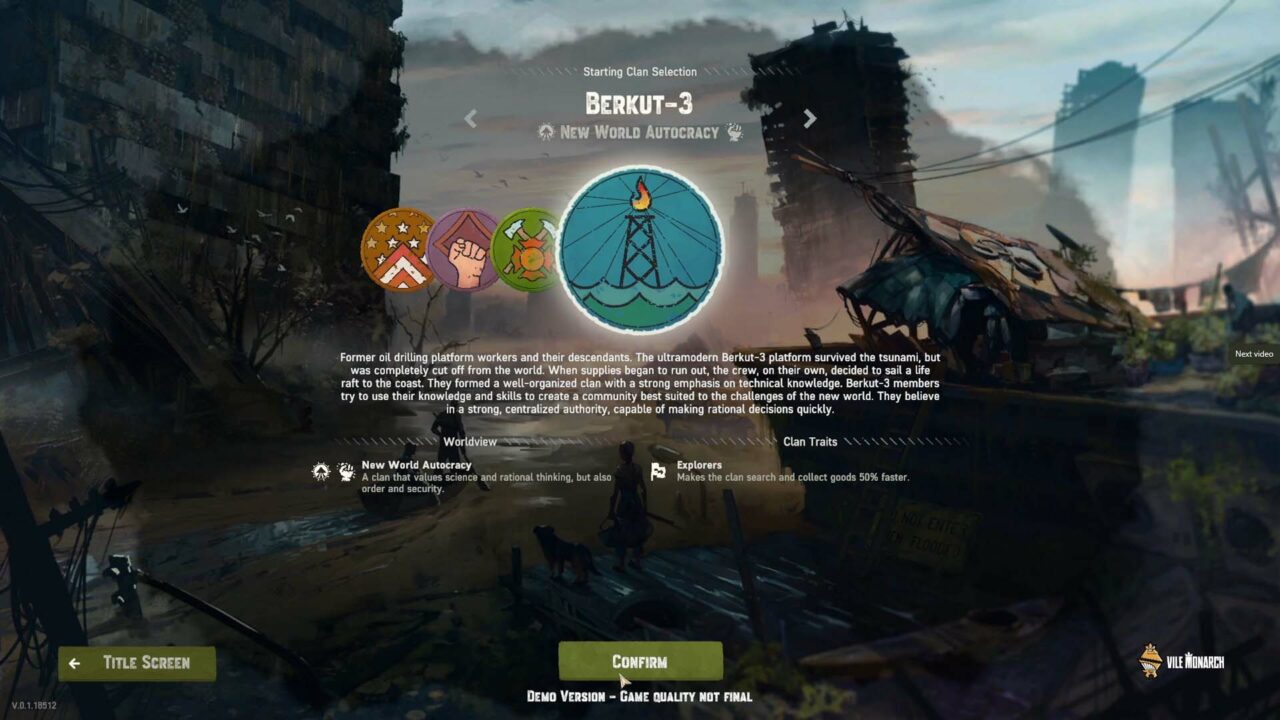 In the beta I played, there were four clans that you could pick from, each with its own pros and cons to suit your play style. This feature encourages replayability so that you can try out different ways to build your settlement.

The gameplay mechanics are quite in-depth and the features really help with the immersion so that you get invested. You start the game with the bare minimum required to begin foraging and building and over time, you find ways to improve and expand your settlement. You can earn points that you can invest in a tree that allows you to develop more and more sufficient and effective facilities to help your clan.

Just like any survival game, you’re going to need to collect materials which you can do by dividing up your people and tasking them to do what you need. At the start, it’s pretty manageable as you begin with 10 workers, and as you progress you will find more and more people to welcome into your clan. To help with efficiency there are particular facilities you can build in order to collect more materials while using fewer workers. For example, if you need to collect wood, you can place a logging hut that allows you to farm wood from the forest, instead of having to send an individual worker to chop down one specific tree.

Most of the resources do replenish, but at some point, your clan will grow too big to sustain. In order to counter this, there’s an exploration mechanic that allows you to send your workers to designated areas of the map where they will uncloud the mist that surrounds the said area. By building storage facilities, you gain access to reach outside of the maximum range and by doing so, you will be able to uncover new areas and resources for your clan to utilise. 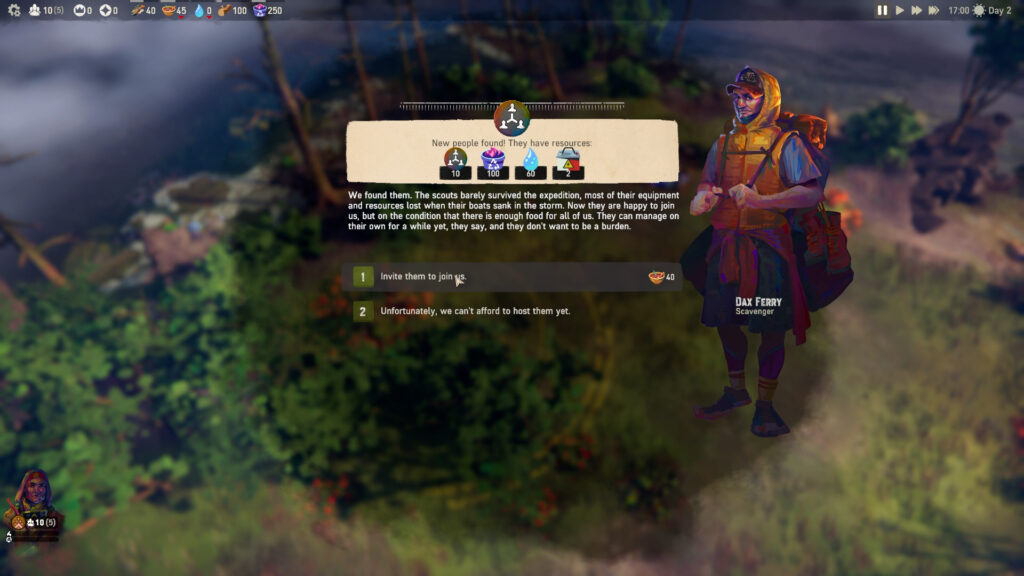 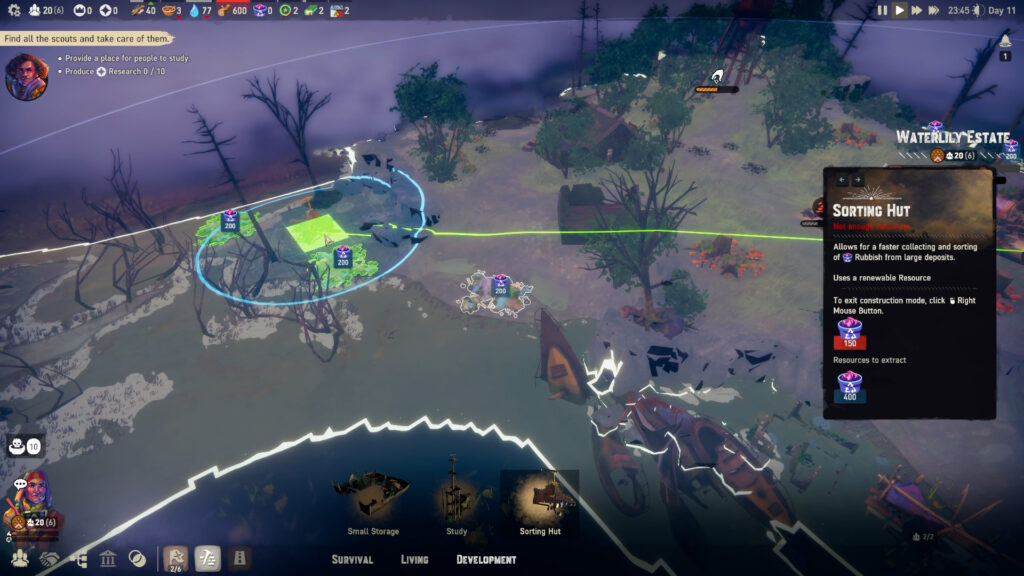 The soundtrack and overall design aesthetic help with the immersion. The main theme of the game creates an ambience that makes you feel like you are actually in a post-apocalyptic world with its almost Wild West feel to it. It creates a feeling that you’re in a world where there are no rules. As for the design, it’s easy on the eyes. It’s not too desaturated, making the world feel lifeless, but it’s not the opposite either. It’s a perfect balance between the two, making the tone of the game feel as if there’s a chance at life and survival.

You’ll encounter other bands of survivors on these travels, add them to your growing community, and the focus will shift from survival to political and social issues. You’ll need to maintain the peace between differing factions, choosing your values and passing laws in accordance with them. You’ll also have to deal with those who may not share your vision for the future.

As someone who hasn’t got much experience with settlement-building strategy games, I was concerned that I was going to have some trouble just playing the game. Although I had the tutorial set to “On”, I found certain instructions hard to follow due to my lack of expertise in the genre.

The gameplay mechanics become intuitive after around 30 minutes of playtime, allowing you to work more and more efficiently. One massive thing that helped keep me from getting bored was the fast-forward feature. The way time works in this game is that roughly every second or two counts as 15 in-game minutes. Once it reaches 9:00 PM the workers head back to their tents or shacks and all work halts until 6:00 AM the next day. Instead of having to waste your time waiting, you can simply fast-forward to 6:00 AM. As an impatient gamer, I thoroughly enjoyed this feature as whenever something was taking too long, say constructing a building or foraging for food, I could simply skip to when I received a notification saying that the task is complete.

The controls are pretty simple yet extremely effective. At no point did the camera movement fail to succeed at what I needed to do. With a simple scroll of the wheel, I’m zoomed in. If I want to rotate the camera, I hold the right click and move my mouse. If I want to move my camera to an entirely different location, WASD allows me to pan across the map with ease.

The game does punish you however when it comes to utilising your materials. At the start of the game, you need to strategise how to use your materials efficiently otherwise you won’t have enough for the necessities. You don’t want to be going around in circles wasting materials, otherwise, it could cost you your clan. 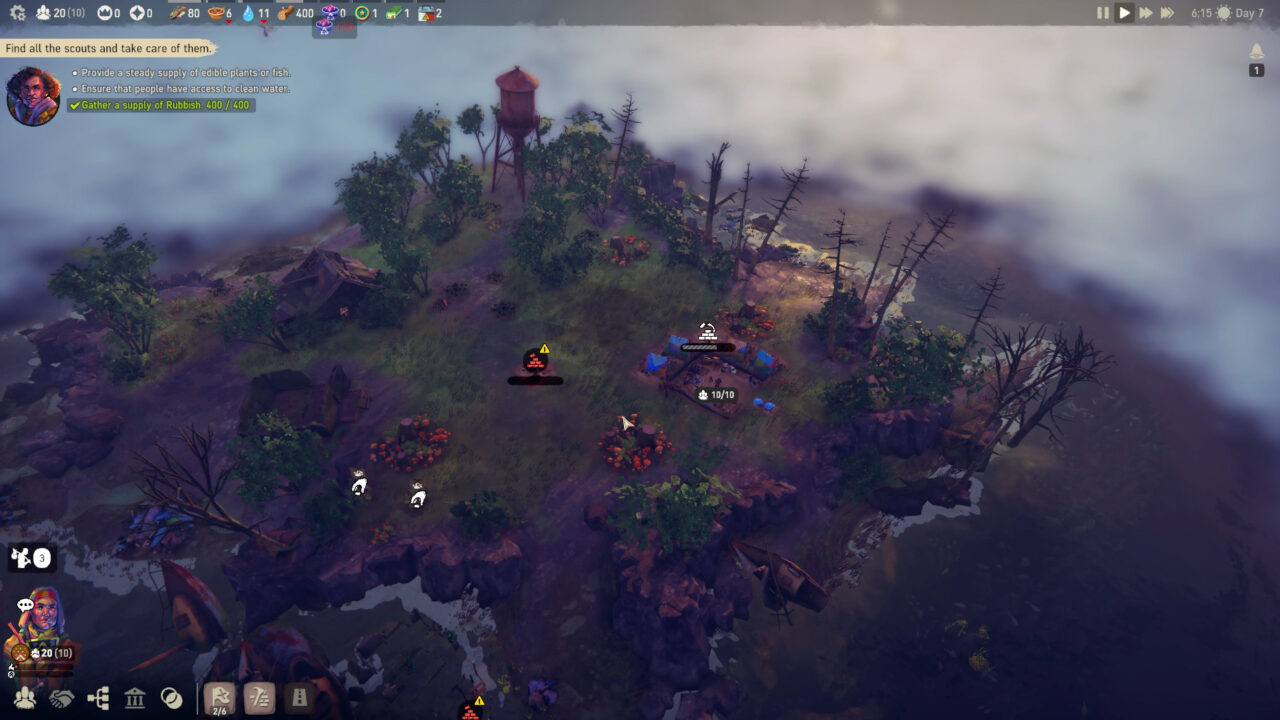 As much as I try, I can’t seem to find any real faults with the game itself, but I guess that comes with the genre. The existing features work pretty much flawlessly and the game is a pleasure to play, and yes, there are improvements to be made but only by implementing new features. My only gripe is that it the tutorial could be a little bit easier to follow.

As someone who doesn’t have much interest or experience with the genre, I’m happy to say that I enjoyed my time playing. Unfortunately, there’s only so much I was allowed to play during the beta, making me replay the game a couple of times. I found that with every playthrough, I became so immersed in the gameplay and tasks that I lost track of time. The way I see it, the fact that a game of a genre I have little interest in, managed to make me lose track of time while playing, and made me replay it multiple times, tells me that this would be a perfect gateway game for those looking to get into settlement builders.

But for those passionate and experienced with games such as this, then there is the option to take it seriously and micromanage every little aspect of the game efficiently. Personally, I’m keen on purchasing the game for myself and I think you should too.

Feature
The Outer Worlds Beginner Guide: How To Kick Butt In Space

The Outer Worlds is out now; it's a pretty awesome sci-fi RPG if you're into the genre. It can also be a bit tough if you're planning on tackling it w...

Do you know what a Left 4 Dead-inspired co-op shooter needs to stand out? A bit of gritty sci-fi laced into it. That's the gist of the upcoming Warham...