Sequels, despite the momentum they are riding on, rarely fare well. Just look at Independence Day: Resurgence, Starship Troopers 2 … the Star Wars sequel trilogy. Many fail to live up to the high standards set by their predecessors who have previously challenged the status quo and redefined the playing field.

But that’s not the case with Samsung’s Galaxy Buds2 Pro.

The Samsung Galaxy Buds2 Pro is a big leap in improvement from the Galaxy Buds 2 – which we reviewed here. It takes everything that was good, and made them great, turning this piece of equipment into a must-have for those who are mostly out and about. Post-pandemic, video calls are the staple for everyone working remotely from either their home office or a nearby cafe. So having reliable audio equipment for that impromptu video call sans the need to lug around huge ear cans is a godsend.

However, the boffins at Samsung really need to sort out the naming conventions for their earbuds line. Is the Buds2 Pro a sequel to the Buds 2, or Buds Pro? It’s getting confusing.

The Galaxy Buds2 Pro comes in three colors; black, white and purple – all in matte finish which we like. Their cases are color-matched, and you can either charge your Buds2 Pro using the USB-C port, or wirelessly. Nice. 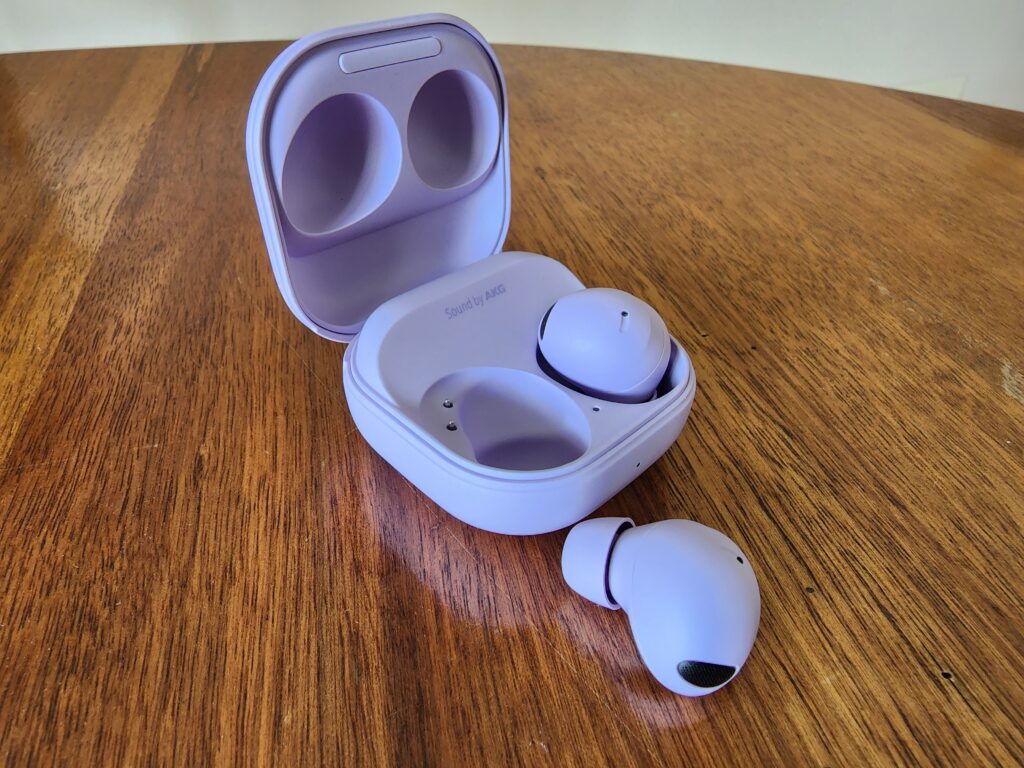 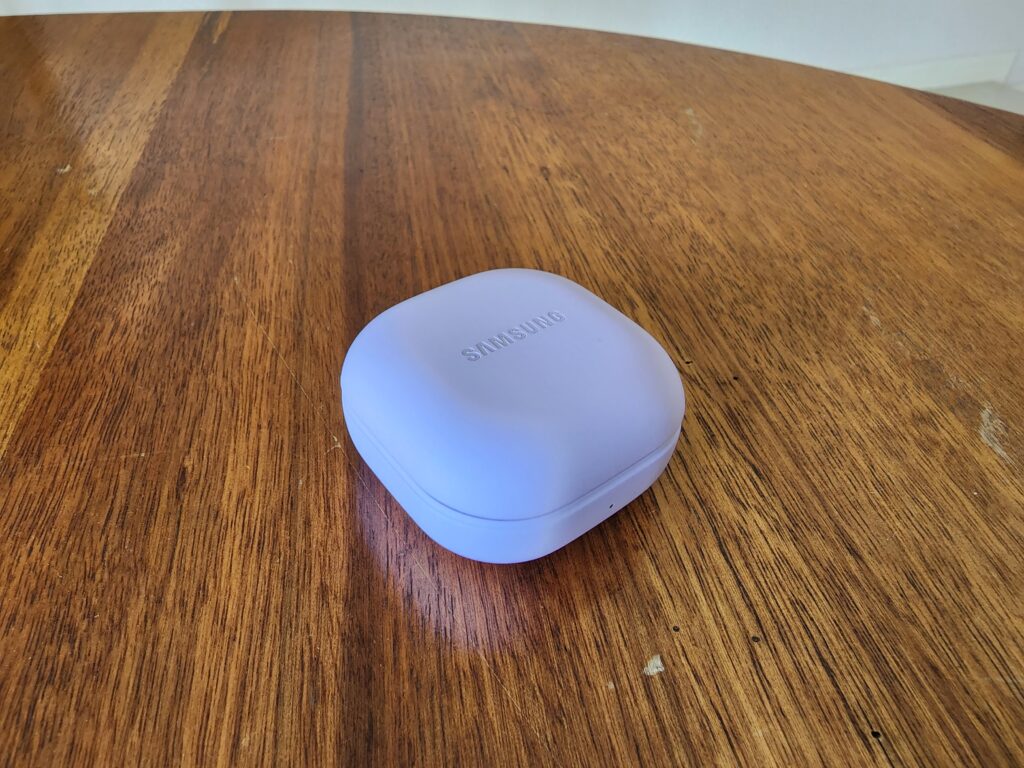 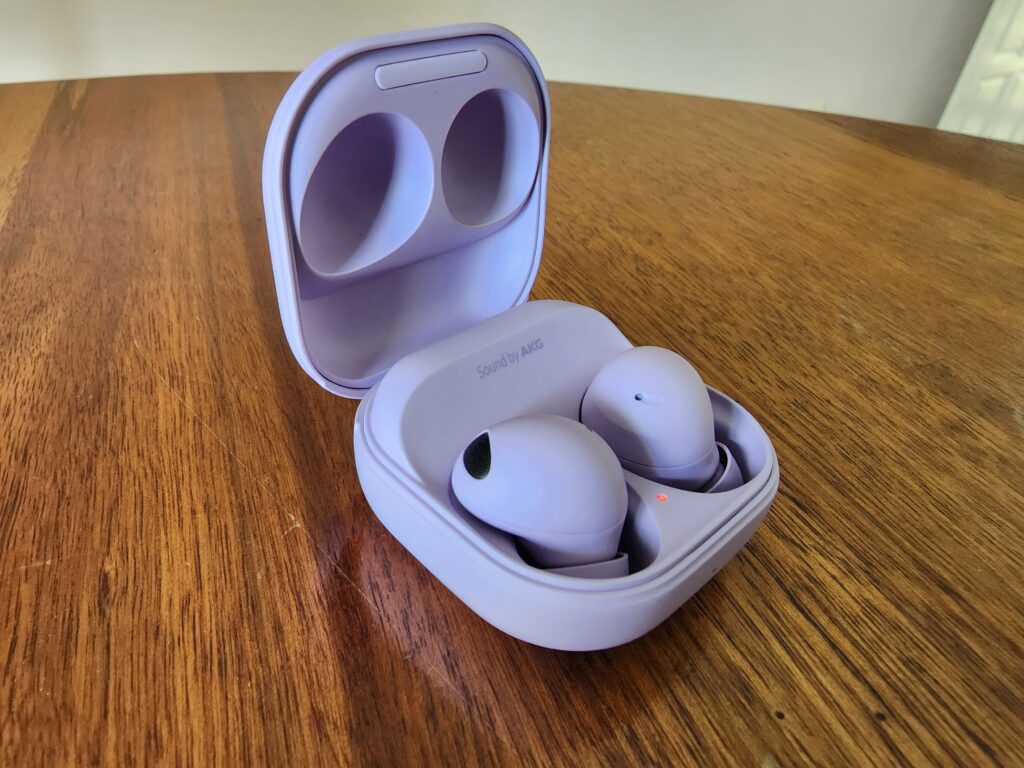 As a mobile replacement for our standard headsets which we normally use when working from our desk, the Buds2 Pro is more than just a capable alternative. So far, it is the best fitting earbud we have ever put on, staying secure in our ears save for the most rigorous of runs – which happens very rarely considering our current physical shape.

Speaking of runs, those who sweat profusely would be glad to know that the Buds2 Pro is certified IPX7 which means sweat or a jog in the rain won’t kill it. Although we would not recommend going swimming in it.

The Buds2 Pro also comes with active noise cancelling (ANC) which is surprisingly brilliant – the screaming kids in our most recent flight were reduced literally to hums in the background. Like its predecessors, controlling the Buds2 Pro consists of tapping the device or either side of it. There is very low latency to these commands which allows you to operate your earbuds without the need to whip out your mobile phone.

Although you would want to, as you can further customize the features to suit your preference via the Galaxy Wearable app which is pretty extensive. Voice Detect identifies when you are talking and immediately lowers the volume, eliminating the need to remove the buds, while turning On the Ambient Sound option allows you to listen to your own speech, ensuring you aren’t shouting during your conference calls.

You can customize your controls as to what happens when you tap and hold either side of your Buds2 Pro. We went with activating Spotify when we tap and hold the left one, while ANC kicks in when we do it for the right side one.

There’s also a ‘Gaming Mode’ which pretty much delivers a wired earphone experience for that crispier, almost zero delay gaming sound. We played several rounds of Apex Legends Mobile and CoD Mobile on the S22 Ultra paired to the Buds2 Pro with Gaming Mode turned on and it was brilliant. In-game footsteps were clear enough allowing us to detect where the enemies are at, while explosions and gunshot sounds were crisp.

Sadly the same cannot be said about our mediocre performance which was more due to the player than the game or devices at hand. Battery-wise, the Buds2 Pro, on paper, should stay powered for up to 8 hours but is severely reduced to 5 hours with ANC turned on. Hey if that guarantees a decent sleep on a flight, we’ll take it.

Save for the most discerning of audiophiles, the sound produced by the Buds2 Pro is way up there. If you mostly use your hearing devices on the go to listen to music and jump into that impromptu conference calls in between locations, the Buds2 Pro delivers in spades. Of course, the voice clarity from the microphone does not hold up when compared to headsets with dedicated mics protruding from them – but that’s the tradeoff of having a compact package. Still, voice clarity is pretty good, with minimal background noise seeping into it.

More than capable delivering what average consumers would ever need, the Buds2 Pro is a fair recommendation for any Android user in search of the equivalent and alternative to Apple’s AirPods – even the Pro variant. Priced at RM899 – a cool RM400 more than the Buds 2, we may recommend going for a slightly older and cheaper option which may also be on discount already.

However, if you are in the market for an upgrade and/or don’t mind spending a decent chunk of change for the best Android wireless airbuds in the market, look no further than these latest offerings from Samsung.

A review unit of the Samsung GalaxyBuds2 Pro was sent to us for review courtesy of Samsung Malaysia. Further details of the product can be found here.

It's been three years since Pacific Rim The Black was originally announced back in 2018, but the day has finally arrived for the 3D CGI anime spinoff ...

Reviews
I'm Not Sure Who The New Mulan Live-Action Adaptation Is Tailored For...

While not as grandiose genre-breaking as past films like Beauty & The Beast and Aladdin in the 90s, Disney's Mulan is still loved by many and is e...

Samsung recently launched its new Galaxy S20 and Galaxy Z Flip smartphones. However, they also took the opportunity to announce their new collaboratio...