Not everyone loves the horror genre, and the body horror genre is even more niche. The most famous directors include the likes of David Cronenberg but one name that is not mentioned as often is that of the late H.R. Giger, who designed the iconic design for the Alien Xenomorphs of the Alien film franchise, especially the surreal and bizarre “biomechanical” aesthetic style the movies would become known for.

Now, there’s finally a game that is fully inspired by the style of H.R. Giger and that game is Scorn. 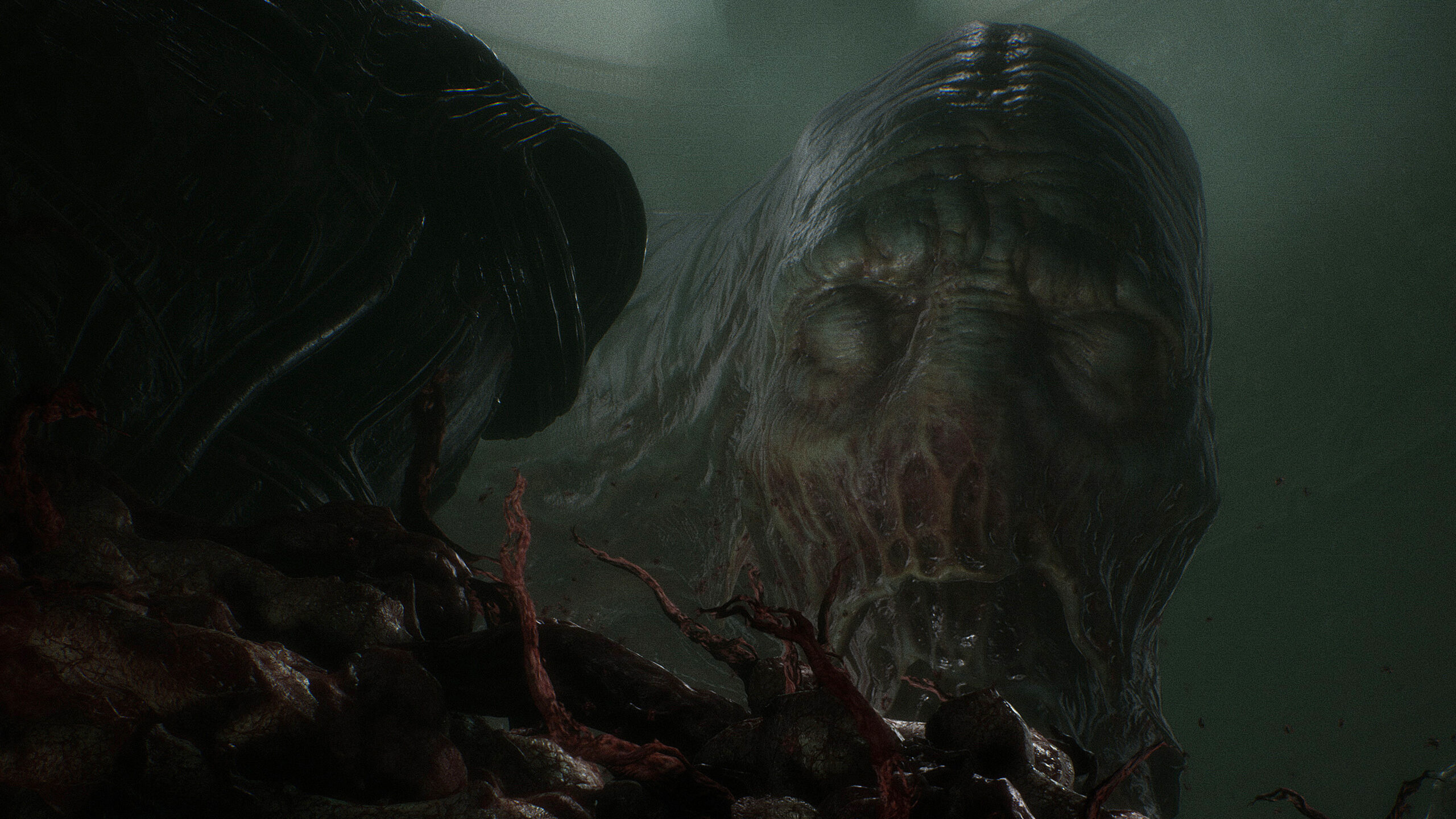 Scorn was originally announced by Ebb Software all the way back in 2014. It’s an atmospheric first-person horror adventure game set in a nightmarish universe of odd forms and sombre tapestry featuring the aforementioned H.R. Giger’s biomechanical style. Imagine a whole world with body horror-esque Alien designs.

According to the developer, Scorn is designed around the idea of “being thrown into the world”. Isolated and lost inside this dream-like world, you will explore different interconnected regions in a non-linear fashion. The unsettling environment is a character itself. After playing the Scorn prologue demo, that’s exactly how I felt. After starting a new game and watching the brief opening cinematic, the game literally just drops me in the middle of nowhere in a hellish-looking and creepy place.

As a fan of horror (including body horror and the like), I was impressed with the world that Ebb Software has created. Most sci-fi games feature the same-looking and similar mechanical aesthetics. This even includes Creative Assembly’s Alien Isolation, which is arguably one of the best Alien games ever made. Scorn is different. During moments when no music is playing, all you hear are the occasional groans, sighs and moans emanating from the walls, which feel as if they’re throbbing and breathing with life. This is definitely a game you should be playing with headphones, especially when you come across some of the parts with screaming later on. 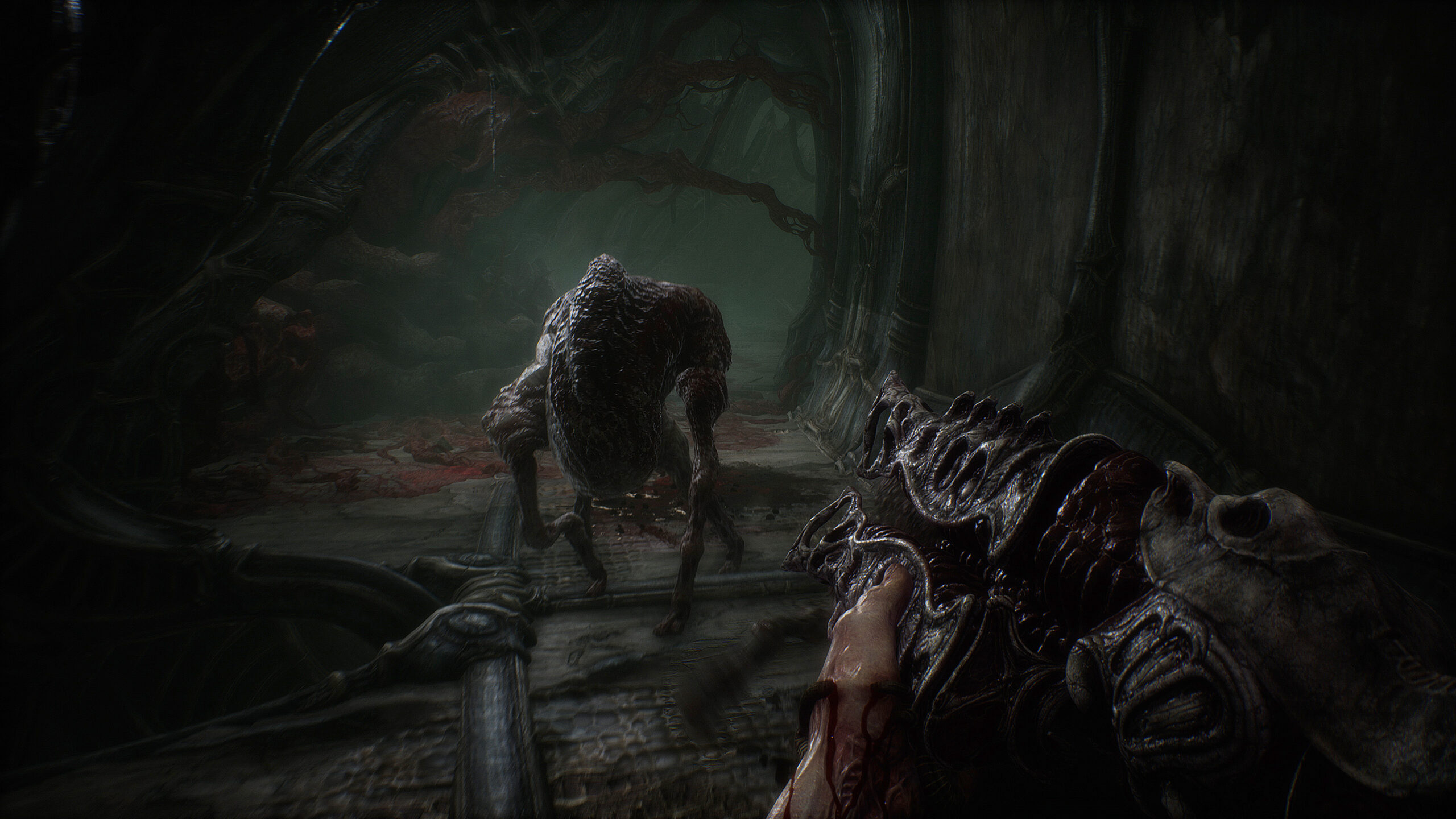 In addition, the details of the world are astounding. Every level and environment looks intricate and designed to the smallest details. It took them eight years to develop this game and it’s easy to see why. Not even big-budget sci-fi movie sets look like this. It’s important to note that Scorn is not a traditional first-person shooter. You’re basically dropped in a place and expected to find your own way out. There are no written objectives or waypoints, no maps or mini-maps. Scorn takes place in an open-ended world with different interconnected regions. Each region is a maze-like structure with various rooms and paths to discover.

Playing Scorn requires complete focus. Why? The game literally doesn’t tell you anything from the beginning to the end of the game. It doesn’t you what a new item or weapon does, and it doesn’t tell you what you need to do in order to progress. It’s really refreshing and unique to play a game without any instructions, tips, waypoints, maps, or tutorials at all. Yeah, despite there being Search Action and Metroidvania elements, there is no map or mini-map to speak of. All of this makes for one of the most immersive games I’ve played in years.

For most of the game’s duration, there’s not much combat to speak of. Most of your time will be spent moving around, exploring and solving puzzles to get to the next area. That’s simplifying it, of course, because the puzzles are connected to each other and they sometimes unlock new paths and rooms. This is where Search Action or Metroidvania elements come into play. You’ll come across certain doors or mechanisms that you can’t interact with until later when you find a key or unlock a new item. Some of the puzzles include moving large mechanisms or even shifting entire parts of the environment around, which is part of what makes the world in Scorn feel alive (besides its biomechanical designs). 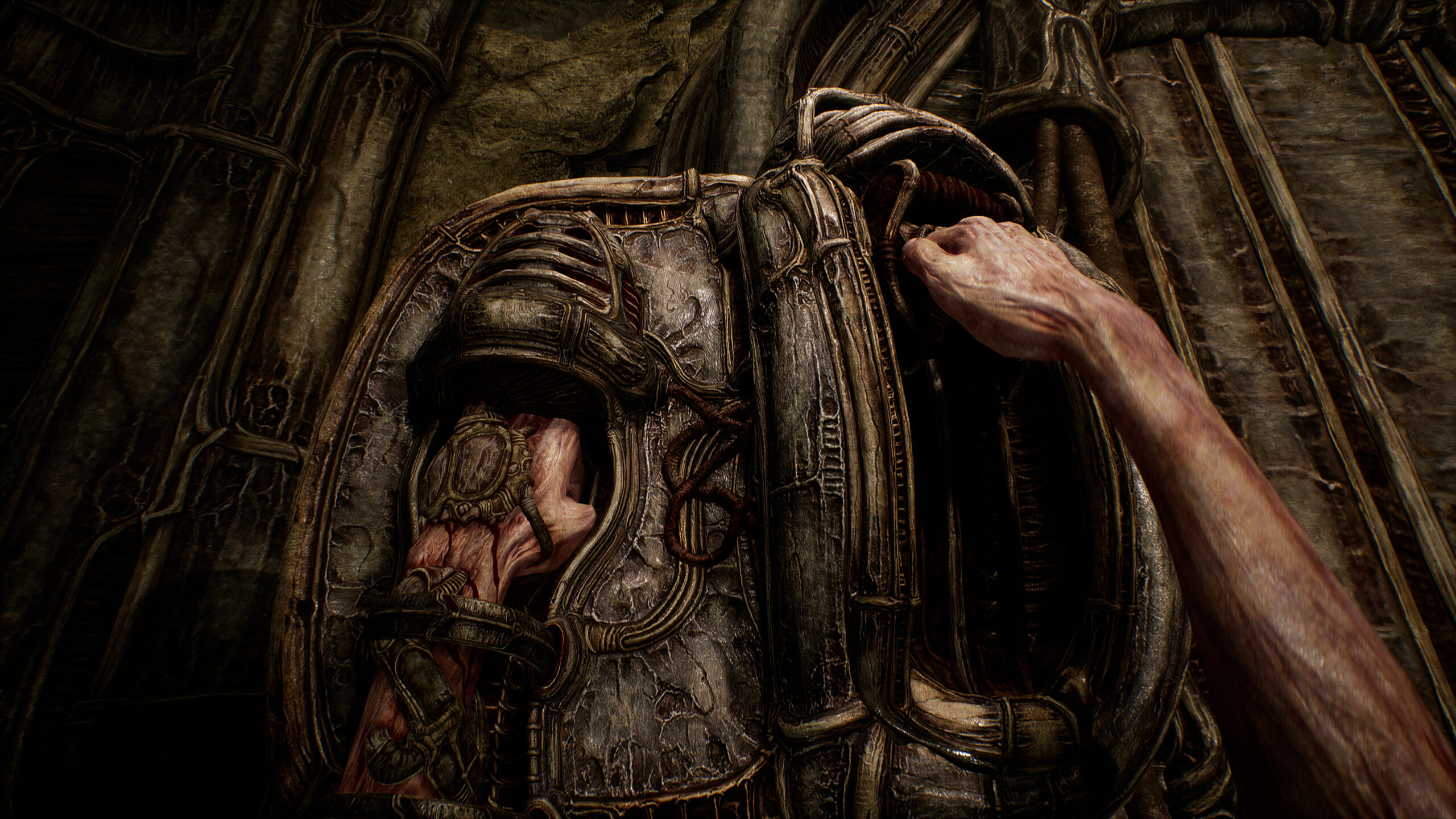 Scorn is terrifying because you don’t know what’s waiting for you around the corner or in the next room, just like a survival horror should. That said, Scorn focuses more on the puzzles and atmosphere than actual combat. While the shooting does feel satisfying and explosive, it’s a lot like Silent Hill where you’re encouraged to avoid combat wherever possible in order to save precious ammo and health for future encounters.

Sometimes, it’s just not possible to avoid combat and you will die a lot in Scorn since there aren’t a lot of stealth options. You can’t even crouch or anything to avoid detection, and the hallways in this game are usually narrow so all you can really do is run away. Some players might complain about the checkpoint system in this game, but I didn’t find it too punishing, especially considering that it’s a survival horror game. If you die, you’ll lose only several minutes of gameplay at most.

For instance, in the first chapter, there was one huge door that required two people to open. Of course, this being a single-player game, I was confused at first, what was I supposed to do? It turns out that I had to solve an elaborate puzzle to find a creature and break it out of its egg. It’s a pretty gruesome process, and this is where the “body horror” part of the game first kicks in. I had to bring the creature to several machines to break it out of its egg and it could definitely be considered torture porn or something you’d see in a David Cronenberg movie. The final section of the first chapter finally has me finding a weapon of some sort, which I have to literally attach to my hand (body horror, remember?). The weapon isn’t a gun though, since it shoots sort of a metal extension in a short almost-melee range, which reminded me of how the Alien Xenomorph’s tongue shoots out of its mouth.

Another aspect that makes Scorn a unique experience is how the narrative is told with no dialogue. There isn’t a single line of dialogue from beginning to end, and that includes readable prompts or anything that you’d usually see in other games. This might frustrate or annoy players who are used to getting everything in a straightforward or direct manner, but for those who don’t mind a more esoteric or abstract form of storytelling, Scorn is for you. 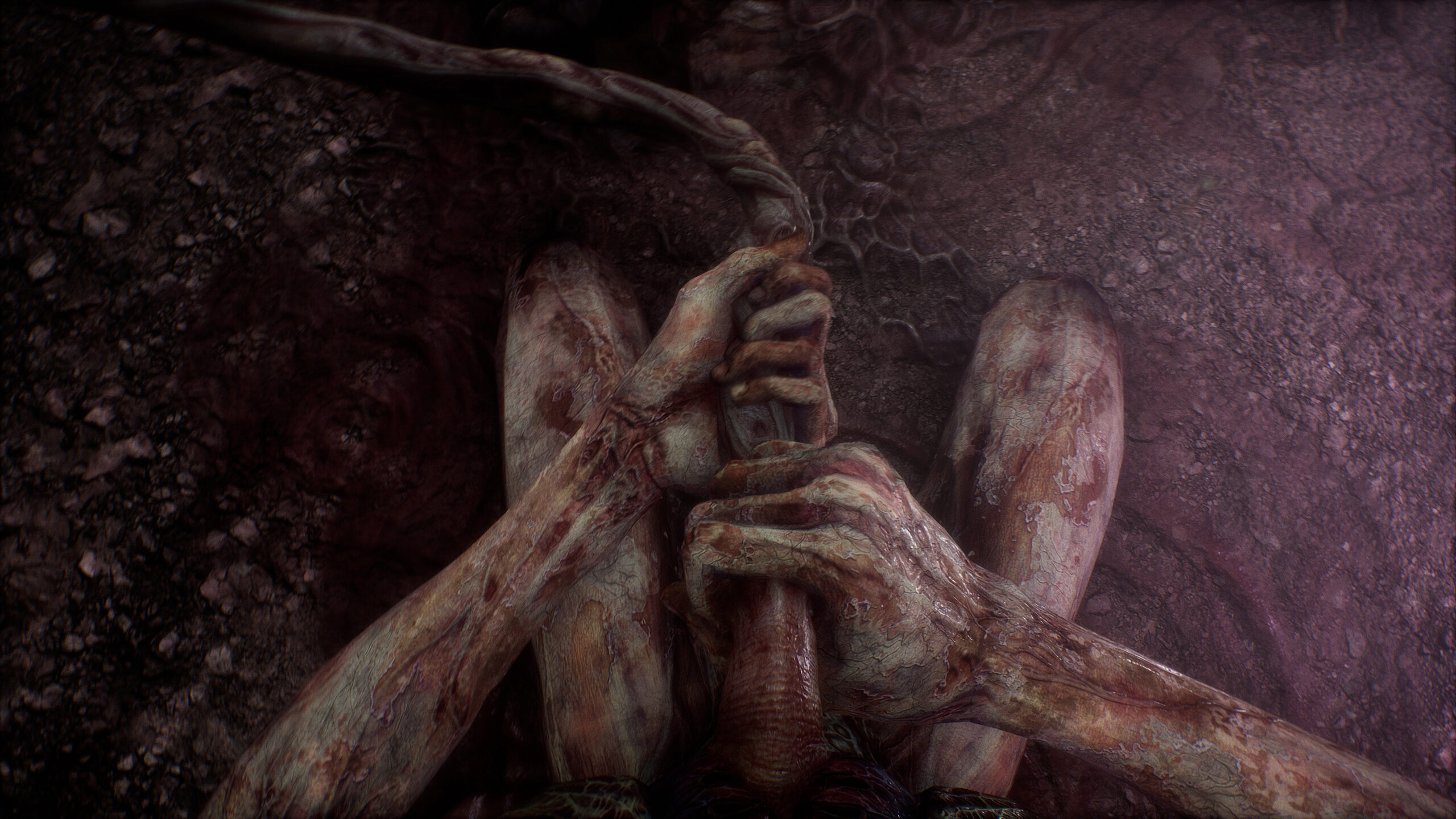 I would recommend Scorn to any fan of horror and/or body horror for its unforgettable experience but the biggest flaw of the game is that it’s a bit on the short side. It took me only about six hours to finish Scorn. However, the developers said that only puzzle-savvy players will be able to complete it around that length of time (six to eight hours) and normal casual players will likely take closer to 10 hours or more to complete the game. The puzzles take time to understand and solve, so you’ll be spending most of your time there instead of in combat.

Combat is perhaps only roughly 20 percent or so of the game, and there’s only one boss battle in the entire game. There were also a bunch of bugs, even ones that occasionally hindered progress and required me to restart a whole Act/chapter, but these will probably be fixed in the day one patch.

Having said that, Scorn only gets more nerve-wracking and intense as you progress through the game. There’s no moment where you really feel powerful because you don’t get more powerful. Sure, you get more weapons, but the ammo you get is extremely limited, even when compared to other survival horror games. The atmosphere of the game never truly lets up, leaving you always on your guard and always feeling the pressure. That’s a huge reason why despite being able to finish the game in only six hours, I felt like it was almost double that amount of time because I was scared out of my mind for the entire experience. 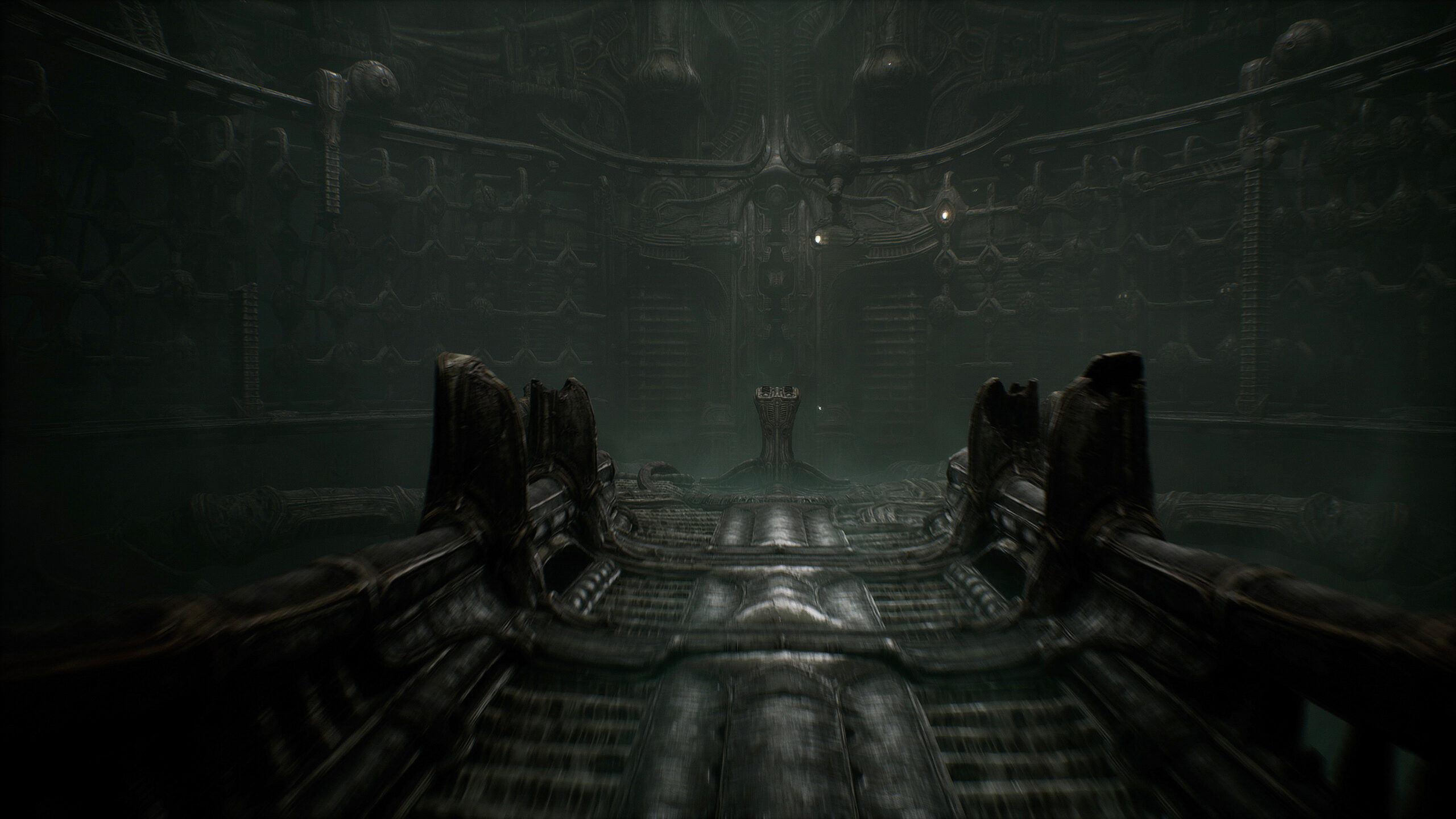 In a nutshell, Scorn is a unique and refreshing experience. It’s more of a first-person horror game with lots of puzzle solving, similar to the likes of games such as Alien Isolation or Silent Hill in a way. The game doesn’t tell you anything, so it’s up to you to explore and navigate through the game’s nightmarish world. Just don’t expect this to be the body horror equivalent of Doom because it’s not. If you love H.R. Giger’s aesthetics and things that are extremely alien, Scorn is something you should try playing.

Scorn is certainly not for the squeamish or those not familiar with body horror, I can tell you that. However, if you’re into Cronenberg and body horror, you’ll love Scorn. Scorn is best experienced with no prior knowledge or tips because that’s how a game like Scorn is meant to be experienced.

We were given early access to the Scorn courtesy of Ebb Software and Kepler Interactive. Scorn launches on PC, Xbox Series X/S and Xbox Game Pass on 14 October 2022.

Update: Ubisoft has recently made some clarifications regarding its new game release strategy. Kakuchopurei has updated the article to reflect the cha...

Game modifications, or mods, are synonymous with PC gaming. It's even one of the reasons why the term PC Master Race was coined. One game that got me ...